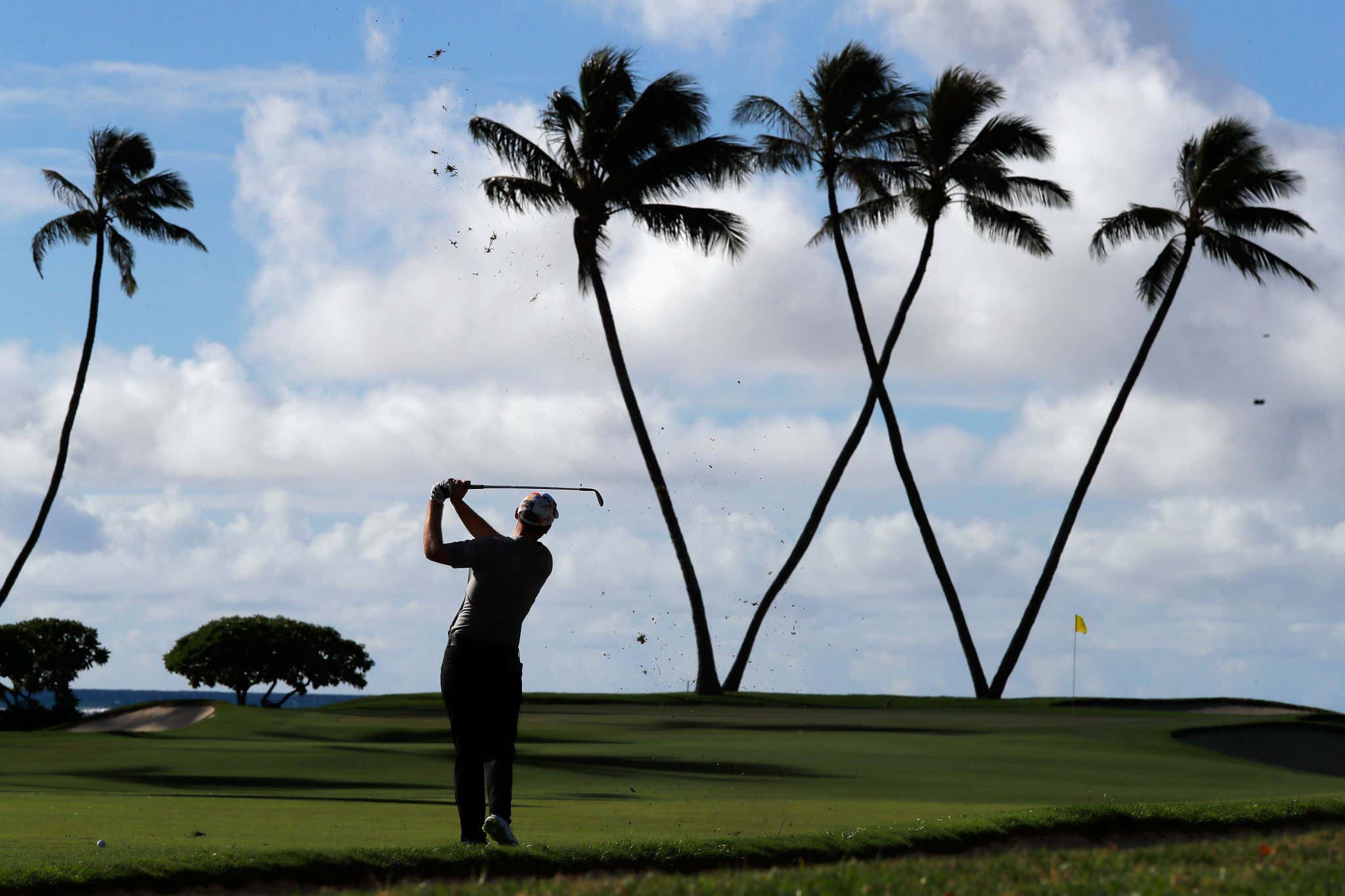 Aloha again! Part 2 of 2 of the Hawaii Swing has arrived. After Cam Smith and co obliterated scoring records at Kapalua, we're island hopping to East Honululu on the island of Oahu for the Sony Open (did you know Honululu isn't on the main island of Hawaii? You do now.) 24 of the 38 players from the Tournament of Champions will join us for the Sony for what will be a full field event - 144 players, top 65 and ties make the cut. Despite some of the biggest names from Kapalua not being among those playing, this is still a pretty solid field for a tournament halfway across the Pacific.

Last year Kevin Na edged out Chris Kirk and Joaquin Niemann by a stroke by birdieing the 72nd hole. His Saturday 61 was tied for low round of the tournament and put him in position to close it out on Sunday. It marked his 4th win in about 30 months after having gone on a 7 year drought after his maiden PGA Tour win allll the way back in 2011. He was also the 7th Sony winner in the past 8 years to have played at Kapalua the previous week. Just a lil somethin to think about. Last year's leaderboard and recent winners below: 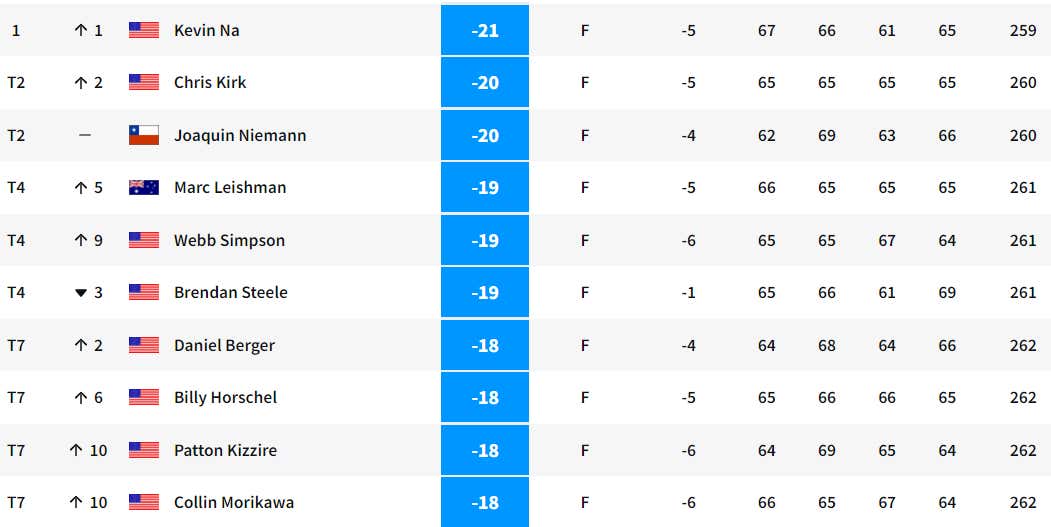 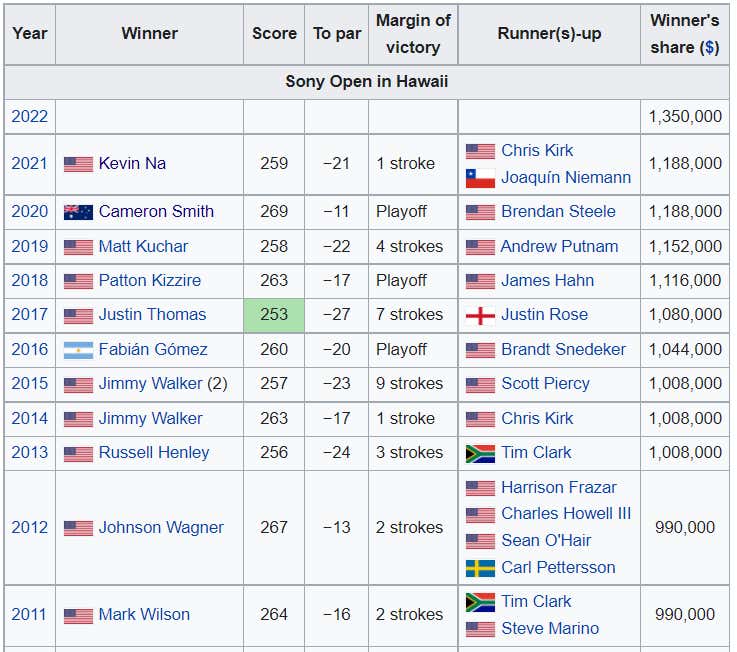 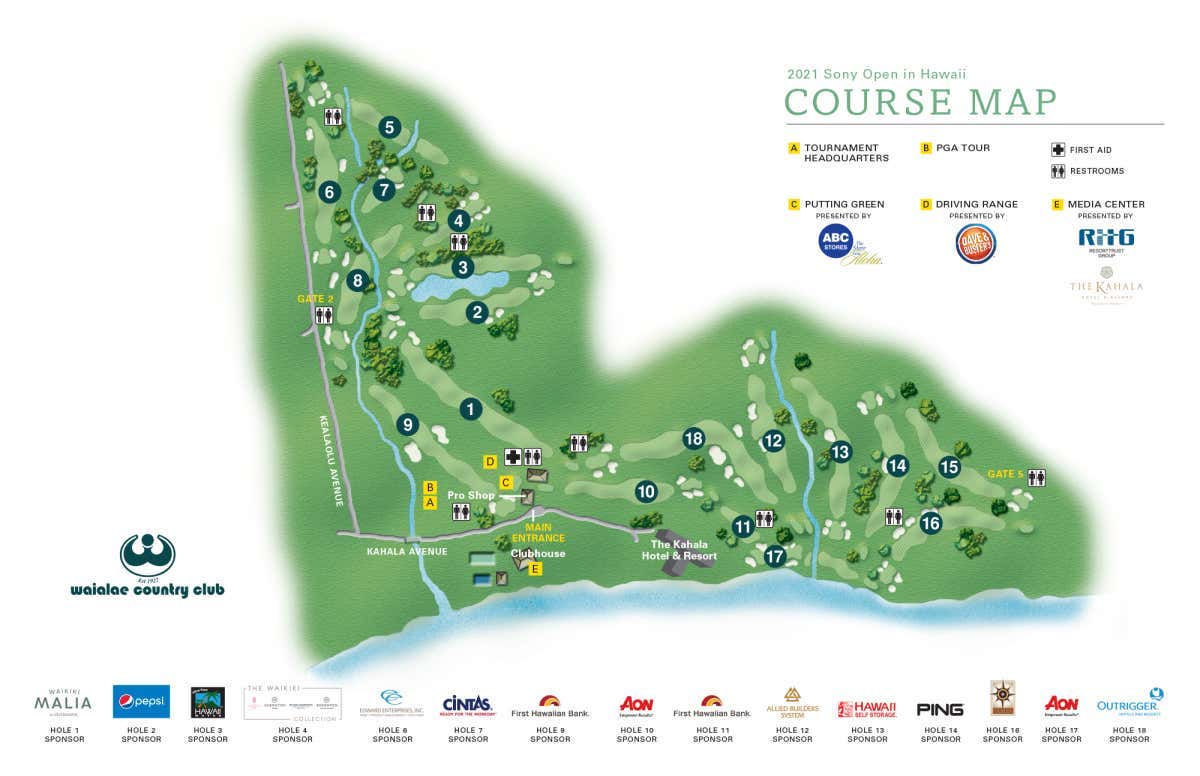 Waialae Country Club is a par 70 measuring just a hair over 7,000 yards. As evidenced by those winning scores, it's not a terribly challenging golf course. Between Waialae and what we see every year at Kapalua, it's safe to say the Hawaii Swing is a cakewalk for these guys.

Now with that said, don't misconstrue these two courses to be all that similar. The differences go beyond just Kapalua being a par 73 and Waialae being a par 70. They're stylistically very different as well. Kapalua is extremely hilly with massive fairways and greens. Nearly 75% of drives hit fairways at Kapalua. On the other hand, Waialae's fairways are among the hardest on Tour to hit, with players hitting about 52% of fairways. Driving accuracy is a virtue this week. That's why you've seen guys like Kuchar, Kizzire, Gomez, and Na in the victory circle. I also noted in my Mayakoba preview that El Camaleon and Waialae have very similar leaderboard overlap, particularly with Kuchar and Kizzire having won both events in recent years. So if you're gonna go deep into the weeds on researching picks, looking at Mayakoba results might be one place to start. Real shame Viktor Hovland isn't playing because I would be hammering the heck outta the Hov. 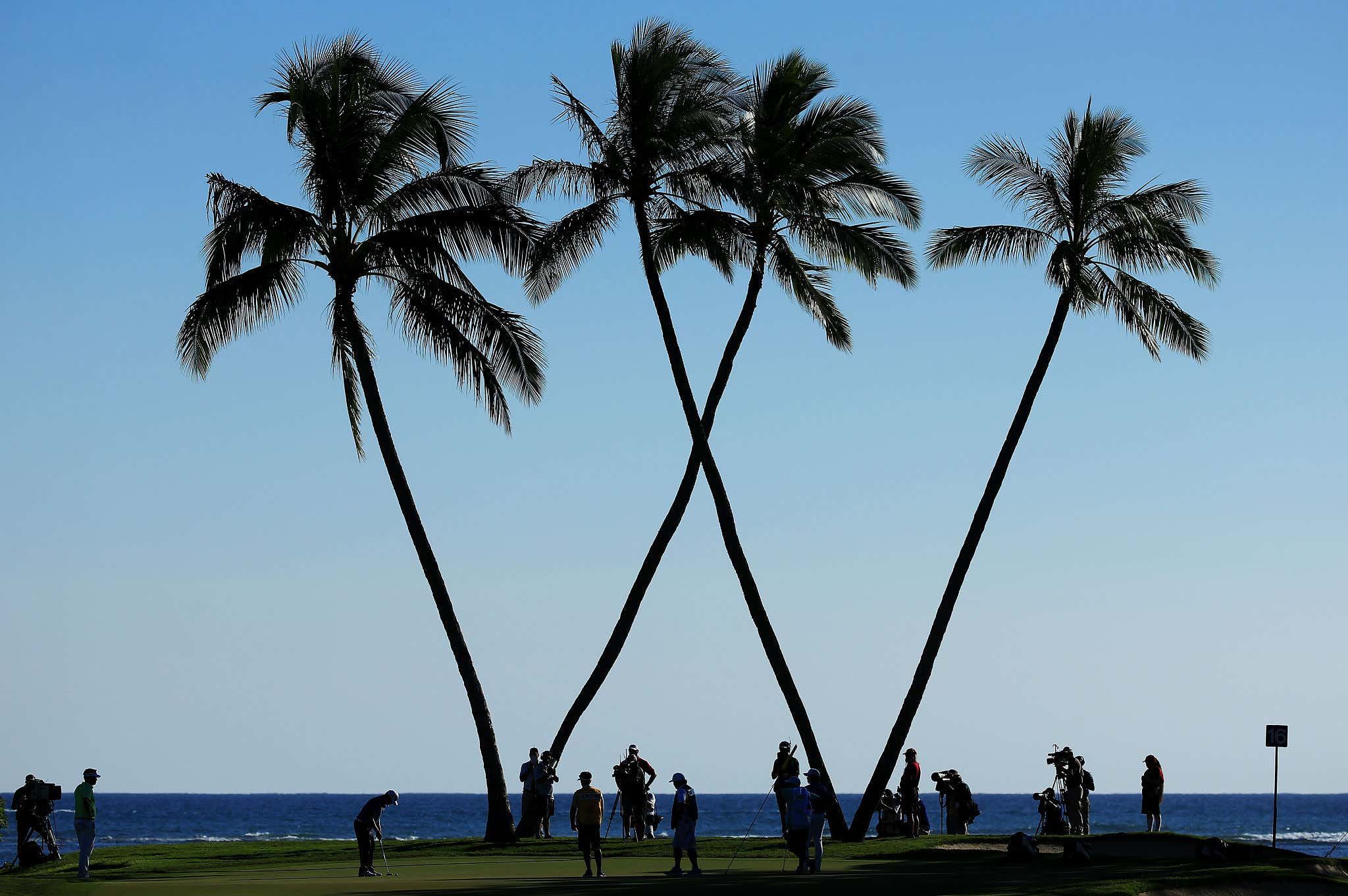 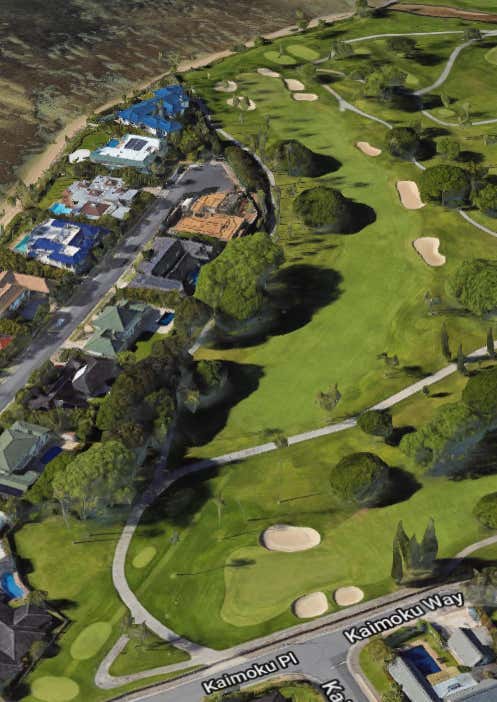 If you follow golf closely, the Palm tree W has gotta be the first thing you think of when you hear the word "Waialae". In reality, this hole doesn't really have much to it. It's a dogleg left par 4 with some fairway bunkers running up the right side to penalize those who try to blast it through the dogleg. You'll see some guys bomb it over the corner towards that 3rd bunker, but ultimately as it relates to difficulty the hole is pretty benign.

But these days the palm tree W is the trademark of this golf course. It'll remind old movie buffs of the big W that the treasure was buried under from It's a Mad Mad Mad Mad World. Rear Admiral might see the thumbnail on this blog and think I'm infringing on his TCM turf. I'm not. It's just a fkn sweet golf course feature. Fun little story about it - it's only been around since 2009. Apparently one of the club members had the idea and lobbied for the club to create the W with some palm trees behind that green. When they found out it would only cost $4,000 to do it, it became a no-brainer. Hence, the iconic 16th at Waialae.

The Weather and TV Coverage 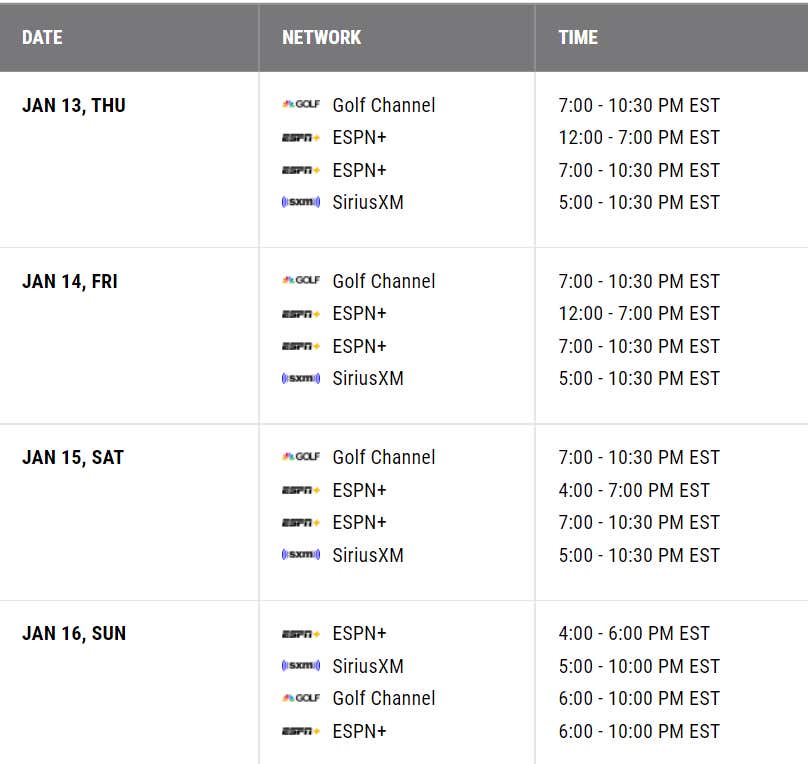 Predictably awesome weather. The part to focus on here is that ESPN+ is at full send this week. We got a good taste of it last week at Kapalua and the coverage was tremendous, but it was also limited by the smaller field size and featured pairings. This week we up the ante to a full field and featured threesomes, which are listed below. More golf is a win for everybody.

Walkoff hole-outs are going to get posted every time. Especially when they're monumental wins for an emerging golf country. 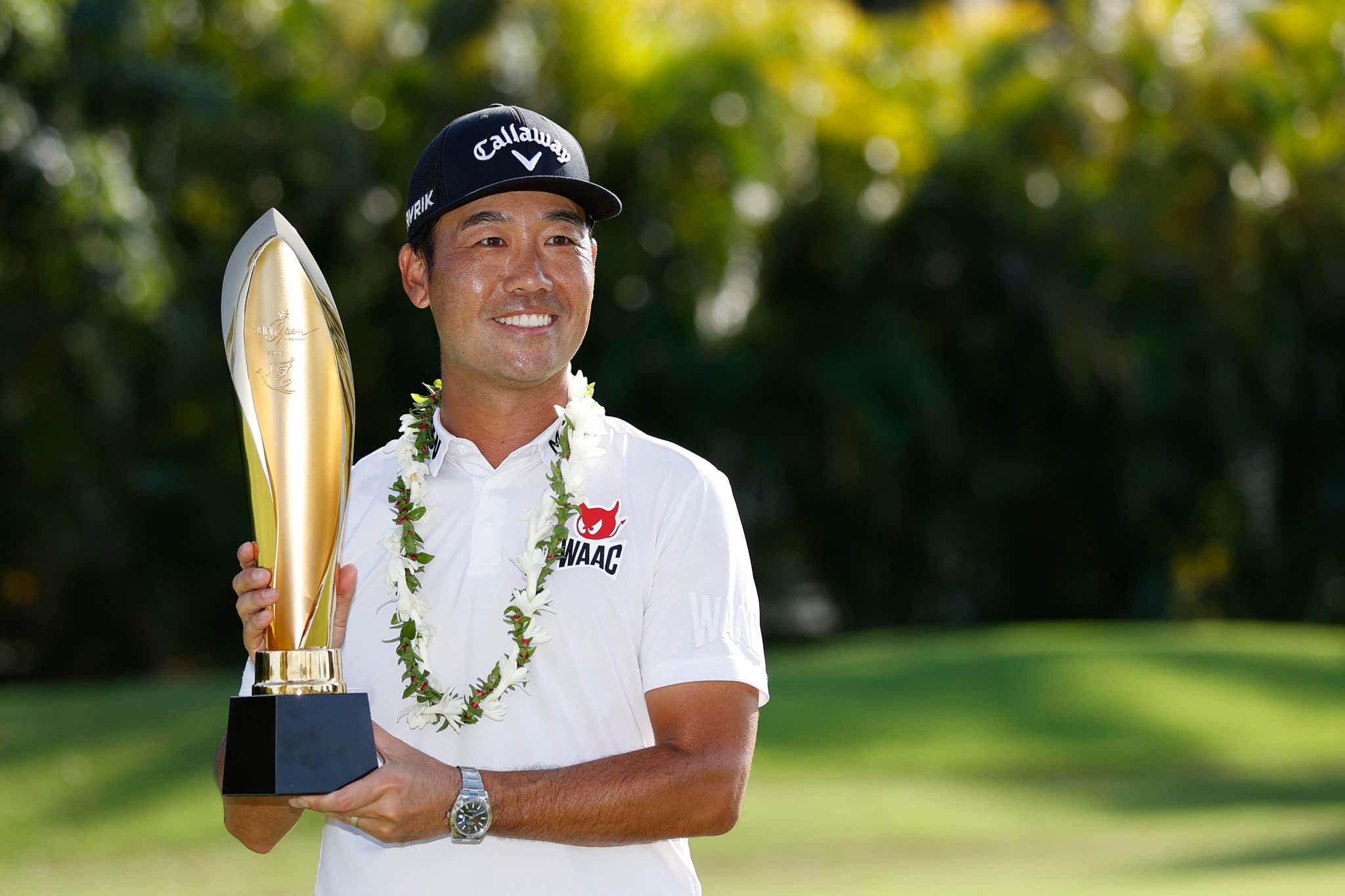 Another week, another unspectacular trophy. I'm not 100% convinced that the College Football Playoff didn't steal their trophy idea off of this one. And that trophy stinks. Just like this one. Redemption points for the lei but this is a 3/10.

After winning the Tournament of Champions with a record score, Cam Smith is your tournament favorite at +900 at the Barstool Sportsbook. Cam's great and he's won here pretty recently, so he's earned that spot at the top of the board. With that said, remember that whole thing about 7 of the past 8 Sony winners having played the ToC the week before? Yeah well don't mistake that for meaning that they played the ToC well. Both Kevin Na and Kuchar recently won the Sony despite shit showings at the ToC. Of course you get an example like JT in 2017 where he swept the Hawaii Swing, but I attribute that more to JT simply just being simply JT. Point is, it seems as though a tune-up tournament is helpful here, but don't get hung up on the results..

So with that thought it mind, I present to you my pick - Harris English at +3300. He finished an unspectacular T-30 out of 38 last week, and fits the bill of a guy who has played well here and at Mayakoba. He's won at Mayakoba and top 5'd in his last two starts there, and has 3 Top 10's in 9 starts here. That might not be a knockout resume at Waialae, but +3300 is a lot of value for a guy who had a 2021 good enough to force his way onto what might be the greatest American Ryder Cup team of all time.

Sungjae Im To Win +1600 - Like Sungjae a lot this week too and he's more likely to win than Harris, I just like Harris as a value at that number just a tiny bit more.

Keita Nakajima Top Asian +1400 - #1 amateur in the world is in this tournament on a sponsorship exemption. This bet flies in the face of the Sungjae bet but he's an under the radar player I plan to keep an eye on this weekend and a little action never hurt anybody.

Winner To Eagle 72nd hole +1200 - Why not? 538 yard par 5 that is typically obliterated by the field. Let's root for a close one and get some action late on a Sundee.