That's 2 Boosts in a row for Chiclets Nation as we have the Barstool Sportsbook treading water after hitting the +260 Point Parlay Monday and then the +330, 5+5 last night.  We need to keep the pressure on them and with only 3 games on the NHL docket, we will try to sweep the board!!

The three games are huge mismatches and at this point in the season with the standings so tight it's rare to see a favorite fall asleep and lose the valuable points to the bottom dwellers. Not only are the top teams fighting for something, these bottom teams know they are not going anywhere and it's time to start tanking for the #1 overall pick.  Don’t think this doesn’t happen in pro sports because it does as I was right there with Pittsburgh when we were trying to secure the top lottery spot in the 2004 entry draft. There is a huge prize this year for whoever gets that #1 pick!!

This is a game of two teams headed in completely different directions. Montreal has lost 10 of 11 games and the Bruins have won 5 of their last 6 games.  Boston has split up the perfection line to the displeasure of some but has been a great move as now the offense is spread out over 2 lines and they both have been fantastic.  All of this said the main reason for our play on the Bruins today is the fact they welcomed Tuuka Rask back to the locker room and that will shoot even more energy into this surging team.

Seattle is as bad as a lot of us thought when they made their selections in the expansion draft back in July.  They have lost 9 of their last 10. Even though they were close against the Avs a couple of nights ago it was only due to the poor play of Colorado.

Everyone is talking about the Penguins and how they have won 11 of 12 games and might make another cup run, but do you know the team that beat them?  You're right, it was the Dallas Stars who are one of the top Home teams in the entire league.  Dallas' power play has been electric and they catch the Kraken in their 2nd game back from a long break which is always much harder than the 1st game. Add in the sour taste the Stars still have in their mouth from the way the game vs. the Blues ended on Sunday and we have all the ingredients for a blowout.

As a bonus to get us over the top Bill Guerin played for the Dallas Stars and he was our guest on Spittin Chiclets this week, so that is the final bump for us to hammer this game.

Tonight is the night where we will see where our own Paul “Biznsty” Bissonnette’s loyalties lie as his two favorite teams go head to head in his place of residence. The Coyotes are last in the entire league in points and please don't think being at home tonight gives them a chance vs the Leafs because they have the fewest points there too.  The Leafs are buzzing having won 5 of 6 games with the one loss coming to the Avs where they held a 4-1 lead at one point.  Matthews is returning home, so you know he has a ton of money on the board that the boys will want for the next team party.  There’s something about playing in your hometown that usually makes you tickle the twine, so look for Matthews to continue his torrid goal-scoring pace.

The Chiclets Crew has thrown all 3 of these bets into a parlay and got the Barstool Sportsbook to once again boost the odds for us. Tonight we try to make it 3 in a row and put a try to knock a leg out on the book. The people of Boston may hear RA calling for Puck-line Jesus to show up if the Bruins don’t blow this thing open early.

As an extra bonus for the big game on TNT, we have added a 2nd Spittin Chiclets boost in The Battle For Biz matchup.  This game will decide Biz’s team for the 2020-21 season for whoever wins gets his support, at this point do they really want it though? 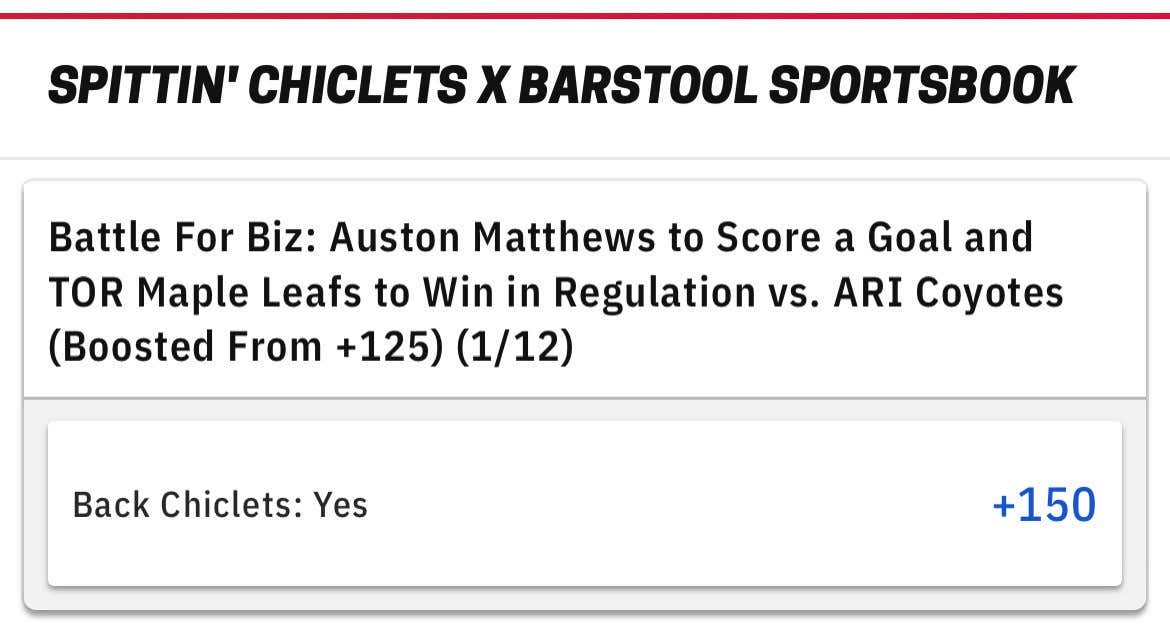 For those of you whose ears are still burning from Biz's rendition of "I'm coming home" every time Matthews' name is brought up on the pod here is the real version!!

Head over to Barstool Sportsbook, go under the Exclusives page, and ride with the Chiclets Crew on these two easy boosts.