Tonight’s Barstool Sportsbook Chiclets boost was left up to the people after the letdown in the desert last night. It’s a huge night in Boston as the B’s welcome back Tuukka but, the first goalscorer in the game against the Philadelphia Flyers airing on ESPN is most important to the bettors.

Four choices were given:

Brad Marchand- the hottest player in the league right now, with 8 goals in his last 4 games. Even battling through a tomahawk to his face.. the guy is a warrior.

David Pastrnak- 2 time guest on Spittin’ Chiclets and part-time stand-up comedian who has made a terrific Dunkin Donut spokesperson.  He has not had any trouble finding the back of the net recently.

Kevin Hayes- Chiclets' fan favorite and has been known to get a greasy goal especially when he's back home in Boston.

Claude Giroux- A huge name being tossed around the trade rumor mill and is lethal on the PP. Can slip behind the defense like a cat burglar who will always snipe on a breakaway.

Pasta took down the survey and EBR couldn’t be happier.  Last time we included him in a boost all he did was score the game-winning goal from Hall to take care of all 3 legs of the parlay with one goal. He did not have his best game yesterday and having to watch his old linemate get 3 against the helpless Canadiens he will be firing everything to get back in the goal column.

He may not be with the other two-thirds of the perfection line, but he will still wear a fire suit to the game and he's still out there with them on the Power Play so he’ll get a ton of looks.  Let’s hope Philly takes an early penalty and Pasta sneaks in the backdoor and taps one home from Marchand to start our night off with a +1125 winner!

Get over to Barstool Sportsbook, go under the Exclusives Page and ride with the Chiclets Crew on this massive boost. Going from +750 to +1125 is Banalands !!!!! 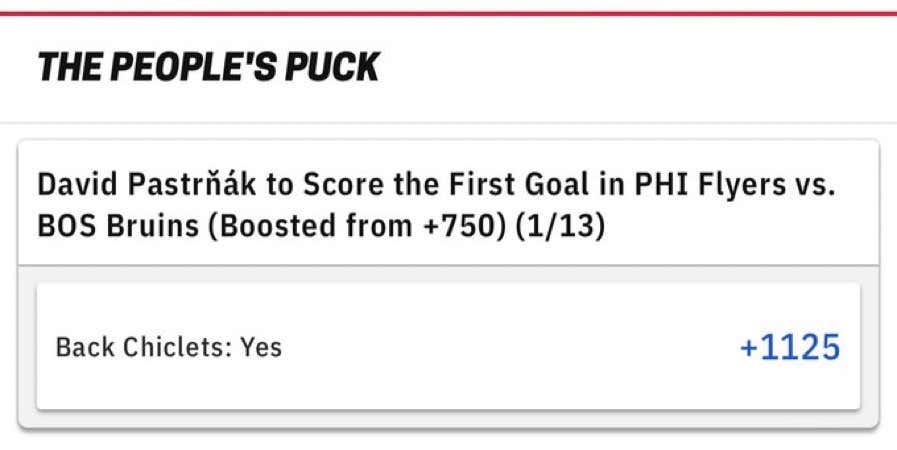