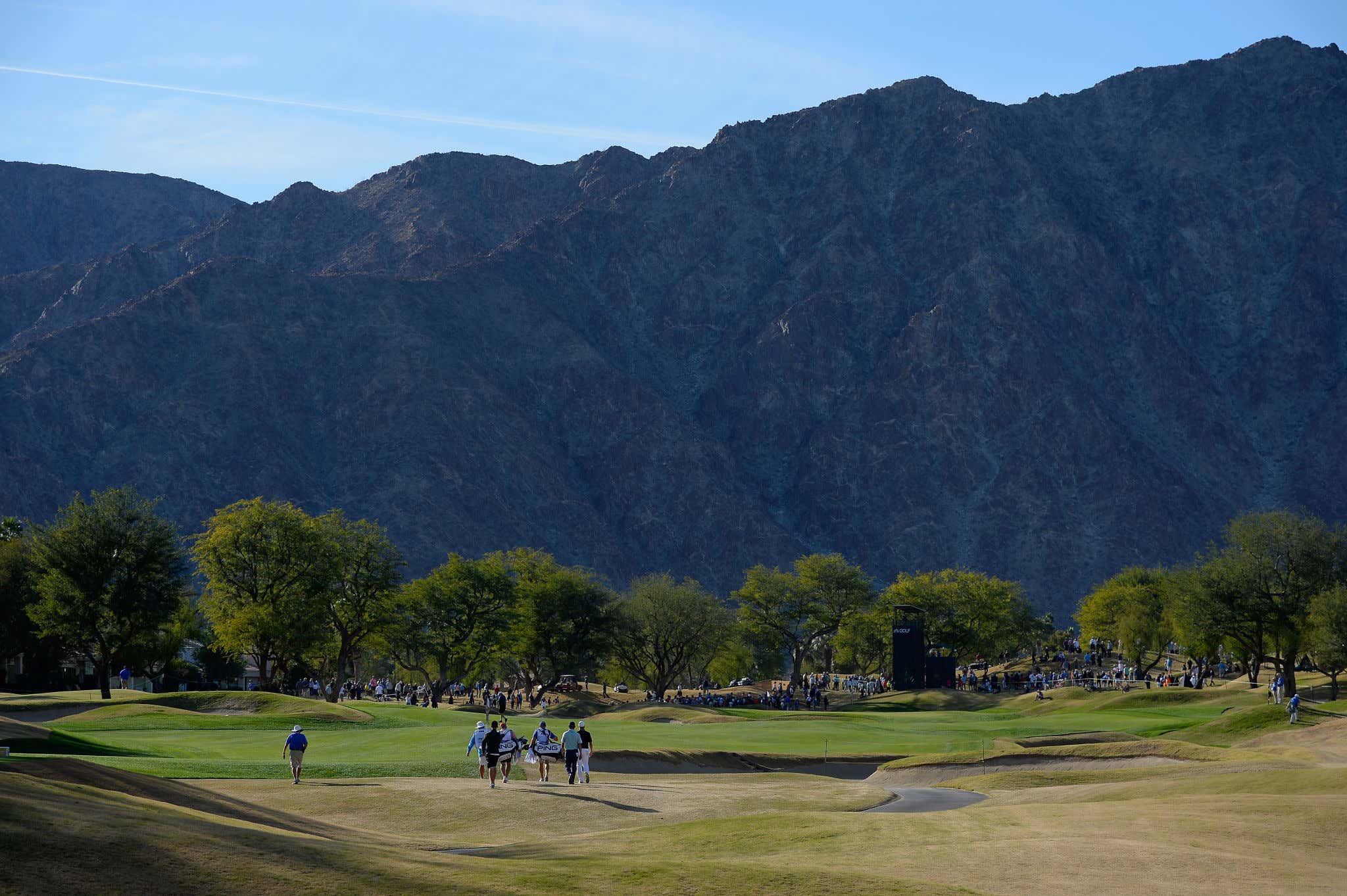 Welcome to the West Coast swing! 5 tournaments in 5 weeks at some of America's most iconic courses. Torrey Pines, Pebble Beach, TPC Scottsdale, and Riviera CC are all on this stretch of the schedule. But first…. a little bit of an appetizer with the American Express. Yes that's the name. No "Open". No "Classic". No "Invitational". It may have been known as the Desert Classic, the Bob Hope Classic, the CareerBuilder Challenge, and a variety of other names but nowaways… it's just the American Express. For the rest of this tournament I'll simply be calling it the AmEx. Deal with it.

For my money this is the last tournament before things really start heating up and the top players start their march towards Augusta. It's traditionally a pro-am much like Pebble Beach, with a 54 hole cut after the first 3 rounds are rotated among 3 different courses. All 3 courses are at PGA West - The Stadium Course, The Nicklaus Course, and La Quinta. Top 65 and ties advance to Sunday, which is played at the Stadium Course. Last year because of COVID they left the "am" and La Quinta parts out and played a more traditional 36-hole cut tournament, but now both are back as the tournament returns to its traditional format.

Si Woo Kim was shakin that ass after he outlasted a ridiculous Sunday charge from Patrick Cantlay, whose course-record 61 moved him from way back in the pack to clubhouse leader. Si Woo was able to birdie 16 and the iconic 17th to move past Cantlay for the 1-shot victory. This was also another tournament that slipped through Tony Finau's fingers as he came into the final round as the 54-hole co-leader with Si Woo. 68 was solid, but it was nowhere near enough. He'll be one to keep an eye on this week, especially now that he's gotten over the hump with his win in the fall at Liberty National. 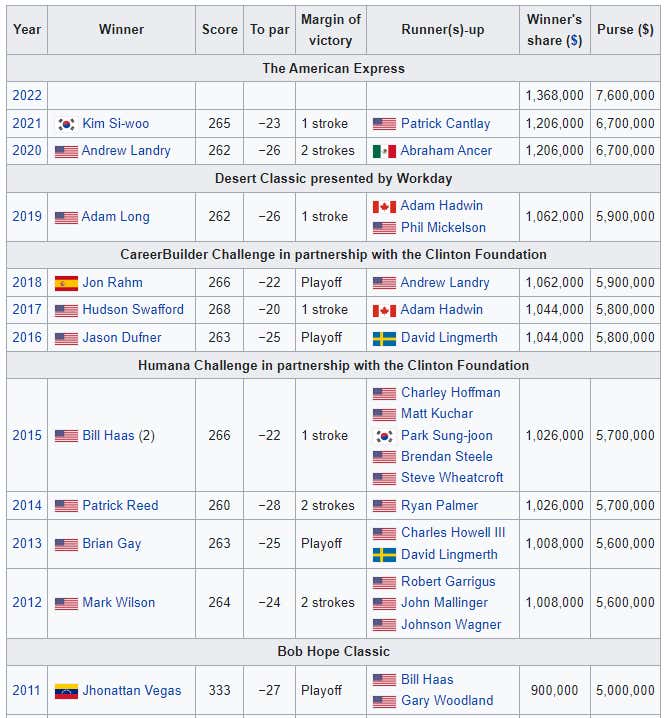 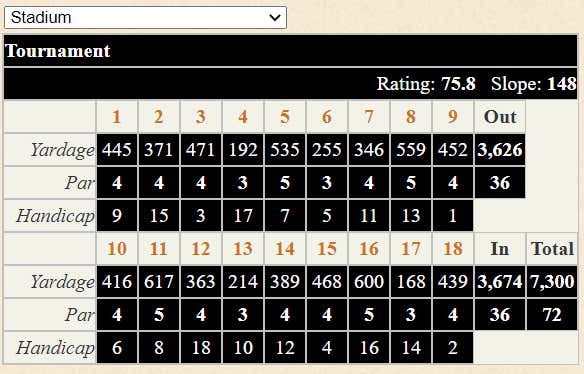 As I said before, we've got 3 different courses in the mix here. All are par 72's and all are right around a mild 7,100ish yards. Since 2 of the 4 rounds including the final round will be played at the Stadium Course, I'll mainly focus on that. What you need to know about La Quinta and Nicklaus is that they're both scoreable and likely won't have shot tracker on the PGA Tour leaderboard, which always sucks.

Pretty wild that Pete Dye created a course that was so challenging that the world's best literally resorted to taking their balls and going home. Nowadays with advancements in equipment, a higher standard of fitness, etc etc… these guys aren't so afraid anymore. If you didn't read the excerpt above, the course is riddled with hazards. There are over 90 bunkers, many of them incredibly steep. I mean look at this monstrosity. 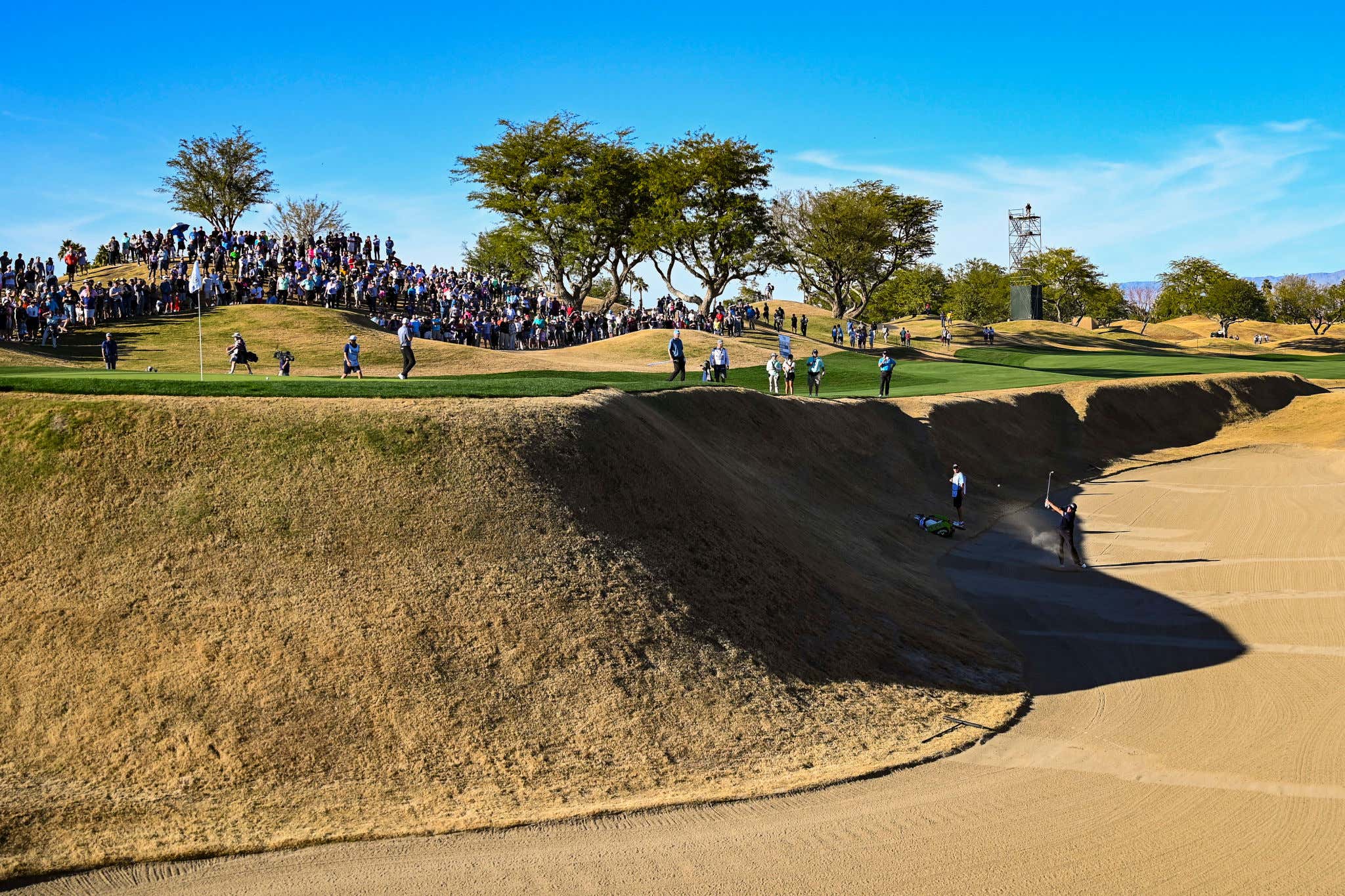 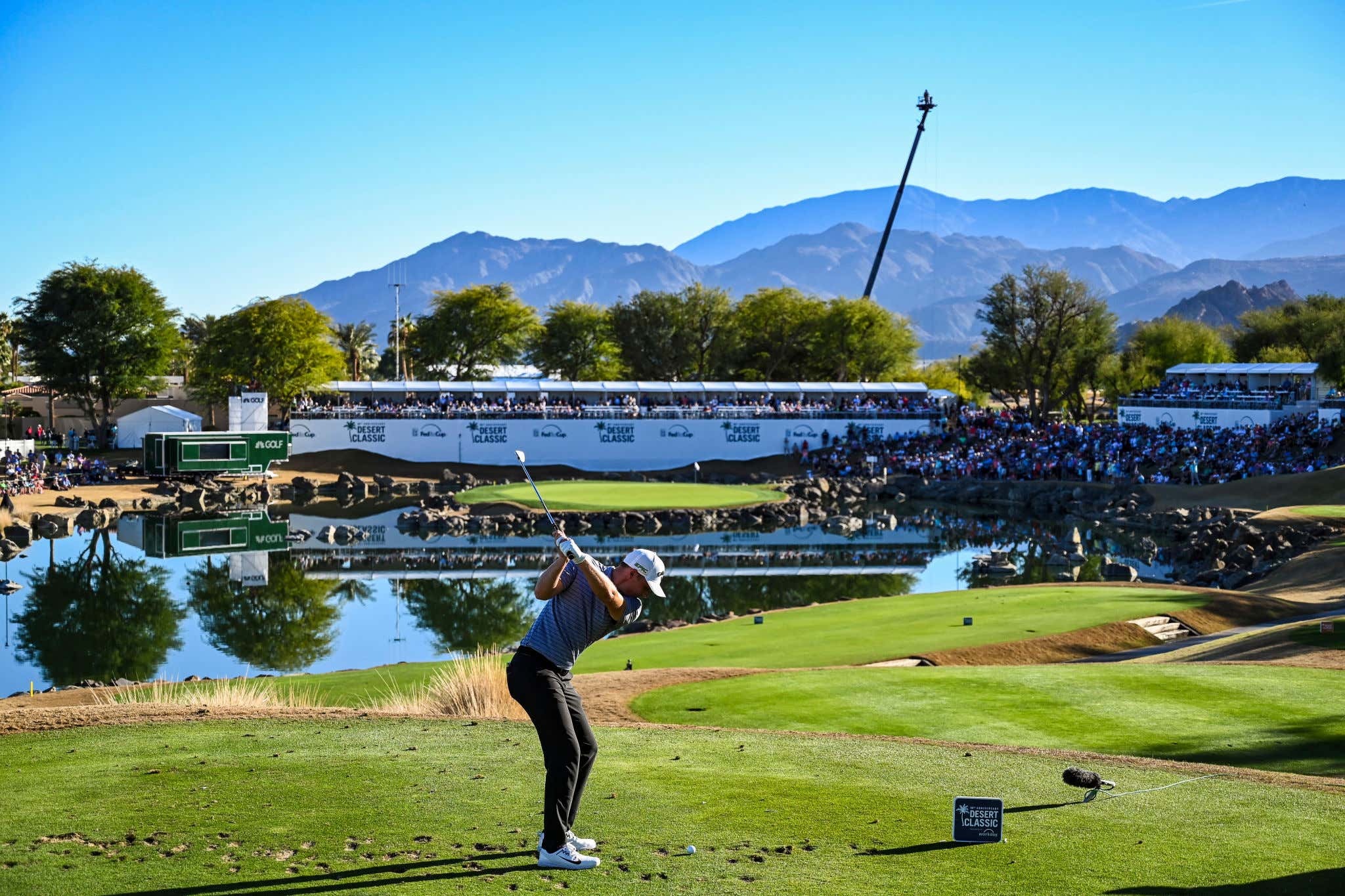 Ah yes, the one they call "Alcatraz". Pete Dye loves his island greens. Obviously his design at Sawgrass is the more notable one, but any time you put a green in the middle of a lake and take out virtually all margin for error, you're going to get great drama. This is considered a sister course of Sawgrass, so having this as the penultimate hole makes a lot of sense.

you kiddin me? It gets better… 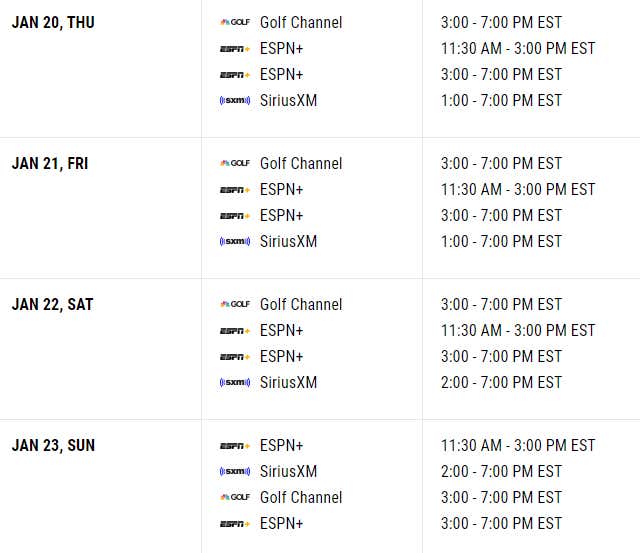 We got a taste of PGA Tour Live on ESPN+ the past two weeks but now that we're on the mainland, they're piping that shit up to full blast. We're getting FOUR simultaneous live streams from the top. Truly a new era of watching golf… 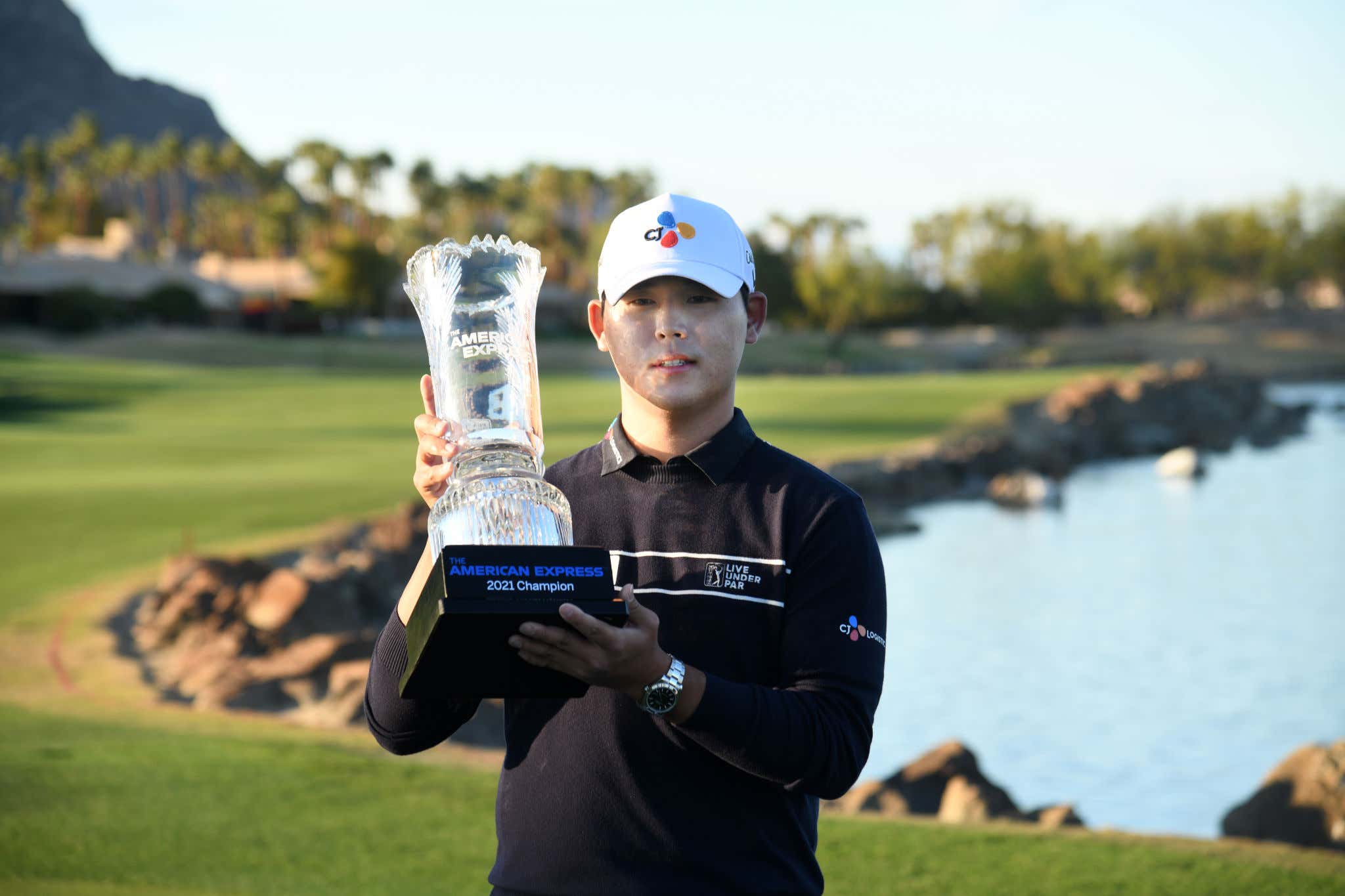 Verrry middle of the road trophy here. Which is probably about what this tournament's trophy should be. Not too flashy, but the glass (crystal? is it crystal?) makes for a nice piece on the mantle. It's whatever. What do you want me to say, I'm trying here. It's a 5/10.

The favorite this week at the Barstool Sportsbook is world #1 Jon Rahm at +500. He was actually the heavy favorite here last year too, but had to drop out after suffering an injury in the gym. There was a time many years ago where that sort of thing would be unheard of. He's played this tournament 3 times and finished T-34, W, and T-6.

That's 2 wins, 5 for 11 on top 5's, and 10 for 11 on top 10's. That's elite stuff. And it's honestly not all that far off of the type of results that he put in week in and week out last season when he went 15 of 22 on Top 10's. He deserves his world ranking, he deserves his spot on top of this board, and he's my pick this week. I hate that the payout is so short and I hate taking favorites outright, but I just love him at this course. Thank me later.

I'd also be remiss not to mention this fella from South Africa creating all types of buzz this week. Absolute BOMBS from the big guy.

Top American Patrick Cantlay +550 - I actually love Cantlay this week too. 65-61 to go -18 on the weekend on the Stadium Course last year was just silly. I can't get that out of my brain. By betting him Top American +550, I still get action on Cantlay and can actually cash both Cantlay and Rahm if Rahm wins outright, and I'm really not shaving much off of the Cantlay payout from +750 to +550 should Cantlay win outright. This is some weird combo of a hedge strategy and distant cousin of a middle.

Patrick Reed Top 5 +600 - Former champ here isn't getting a lot of respect. There's more sand than putting green on this course, so there's a lot of opportunities for the king of Strokes Gained: Rules Manipulation to take advantage.

Will Zalatoris Top 10 +350 - Haven't heard his name in a while, huh? That's what happens when you get screwed out of the FedEx Cup playoffs by an archaic rule and don't make the Tournament of Champions. Anyways, we're back on the Will Z train as it chugs towards Augusta.

Russell Knox Group C +400 (over Fowler/Ortiz/Glover/Moore) - Had a buddy ask another to name the most random golfer he could think of going into this week and he said "Russell Knox". When something like that is said out loud, there's no going back. Simply cannot sit there on Sunday and be in a position thinking what if. So thanks to AC I'm grabbing some Russell Knox action. Ride it or don't.

Scottie Scheffler FOMO Pick To Win +1800 - ICYMI in a couple blogs in the fall, Scottie is my new "bet blindly until he wins" guy, taking over the reins from former FOMO king Tony Finau.

I'll be watching all weekend while on a golf trip to southwest Florida with the boys. Teeing it up at Tiburon Friday, home of the QBE Shootout and the LPGA Tour Championship. Cannot wait.

If you're another course in that area of Florida (or anywhere) and want me to enjoy your fine establishment, the DM's are very open @BarstoolBanks. God bless and enjoy the American Express.