After that crazy weekend of football with the NHL sprinkled on top, the withdrawal from action is real. No fear Chiclets Crew is here with another boost to get you through the night and fill your account up for those of you who lost on the Bills heartbreaker.

Mondays like this EBR always start with some Russian Gas and today it's Alexander Ovechkin providing us with the pick me up. Word around Capital One Arena today is that Ovie, was not shy with his sauce mixing at the pre-game meal, so that means he’ll be ready to go. He’s been scoring goals and celebrating like a madman since his young days in Russia and now he is chasing 99’s goal record, but tonight we just need him to get any type of point.

Brad Marchand surprised everyone with his appearance Saturday afternoon in the lineup and picked up an apple on the game-winner. As a player when you're on a heater like he is you don't want to miss a single shift let alone a whole game cause you don't want to be cooled off. The Bruins are closing out an amazing homestand and can put the icing on the cake with a win tonight. No surprises tonight as Marchand gets a pp helper early to Pasta to check the box on this part of the boost for us.

Nazem Kadri received the fan's vote during the Last Men In All-Atar vote, but it's a complete joke he wasn't in there, to begin with. He’s top 5 in scoring in the entire league and his team is the favorite to win the cup. The Avalanche average 4.6 goals per game at home and the Blackhawks will not be the team to slow them down.  Kadri just needs to be part of one of those goals to cash the boost for the crew and keep adding wins to our accounts.

Get over Barstool Sportsbook, go under the Exclusives page, and hit this boost with the Chiclets Crew as we are all trying to add to our bankrolls for the Vegas trip next week for the Chiclets Cup!!! 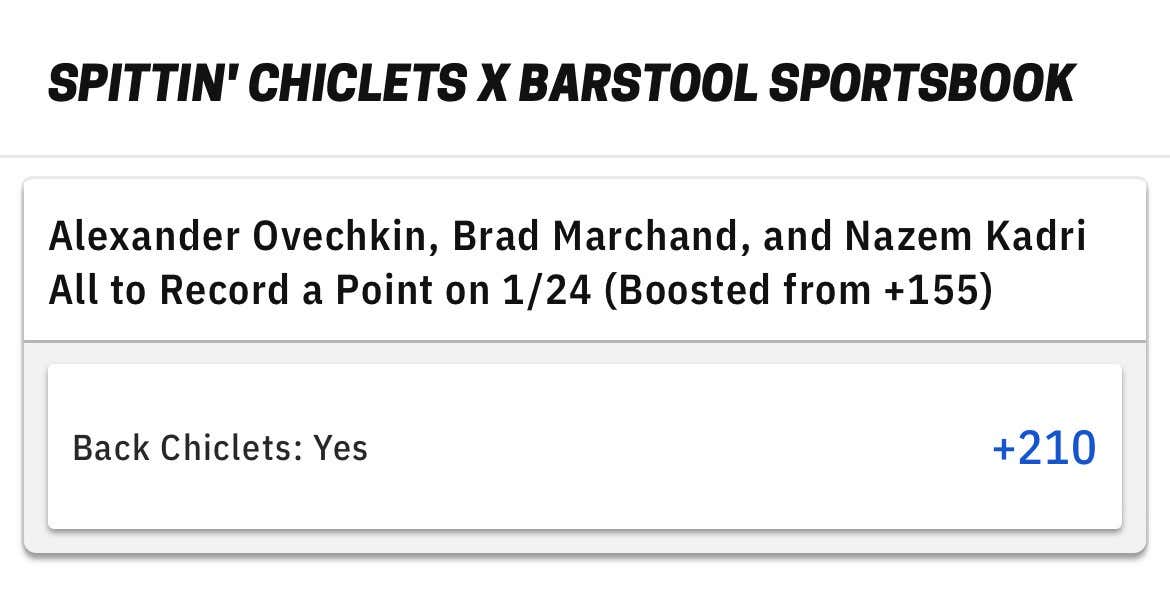