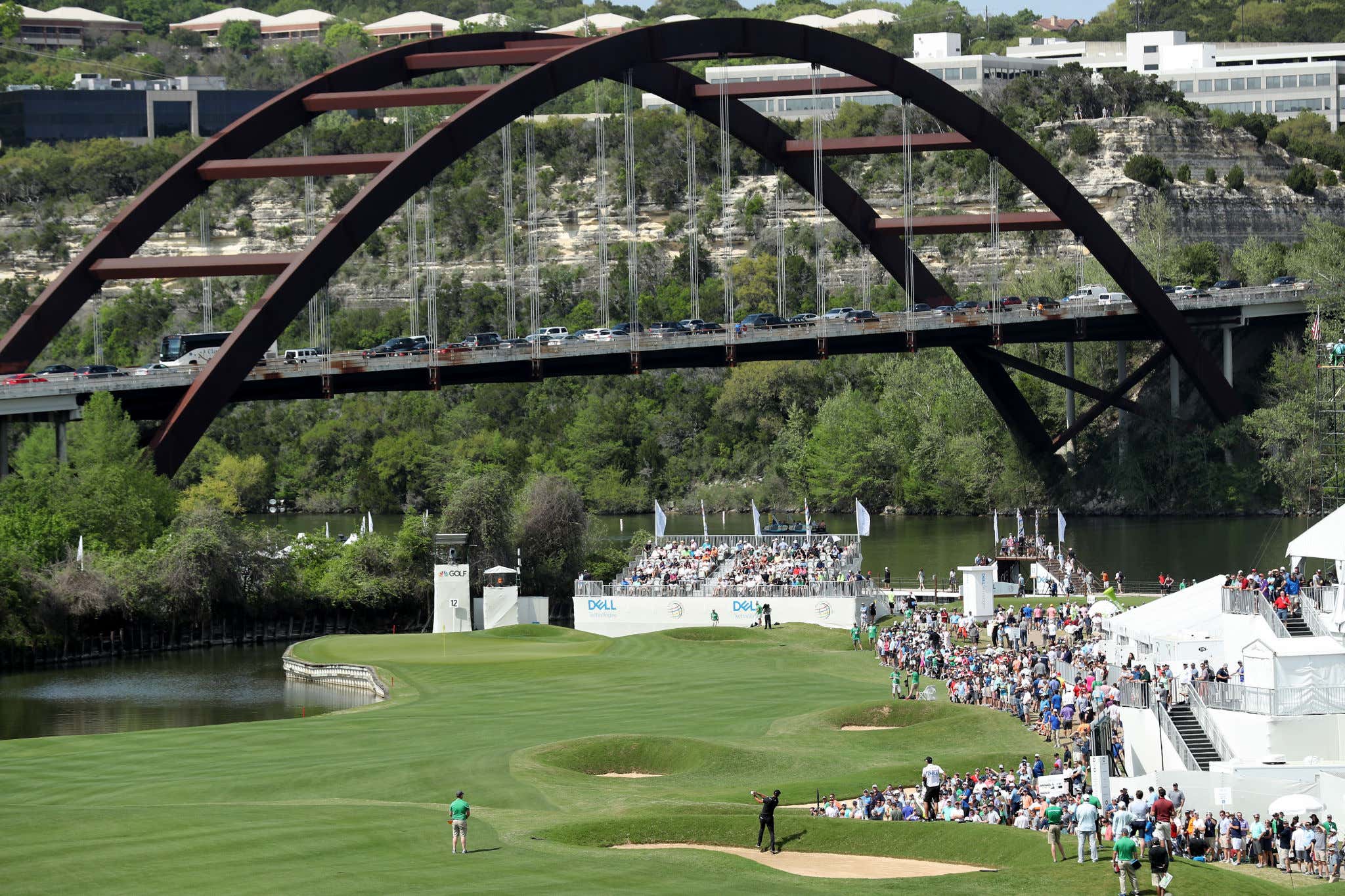 Bracket life can't stop won't stop. It's the PGA Tour's turn as we head to Austin for the WGC-Dell Technologies Match Play.

Match play is such a treat. As it relates to top level men's golf, we really only see it twice a year - here and at the Ryder/President's Cup in the late fall. It's a shame because it's the most exciting way to watch and play golf. Every single hole is a game within a game. Momentum can turn on a dime. Players take risks they otherwise might not simply because the downside is finite - simply losing one hole. One of my favorite things about match play is watching the world's best scramble in ways they never would attempt in stroke play. Here's an entire collection of examples:

It's a shame that match play tournaments don't work so well for sponsors - with no guarantee of 18 holes played and little drama outside the two players in the championship match, it's not cut out to fill TV blocks. So we gotta enjoy it while we get it.

For a long time this tournament was a 64 man tournament, single elimination bracket. Simple as that. Definitely exciting from the jump, but would whittle the field down to a small field of golfers pretty damn quick.

Starting in 2015, they moved to a round-robin format with 4 golfers broken out into 16 pods. The difference is 96 total matches versus 63 under the old format, so that's a major plus. They've tweaked some of the round-robin rules over the years, but the way it works is this: Round robin matches within each pod Wednesday/Thursday/Friday. Win gets you 1 point, Tie gets a half point, and losing gets you zippy. The player with the most points each pod advances. A tie in the standings of a pod after Friday results in sudden death holes late Friday afternoon - which is fuckin SWEET. You might get a half dozen sudden death matches going around closing time on Friday.

From there it's a simple knockout phase. Round of 16 and quarterfinals Saturday (so yes, guys can be playing up to 36 holes or more), and then semifinals Sunday morning and championship Sunday afternoon. So there's potential for a few of these guys to be playing a TON of golf by the time this is all said and done.

You can find and print out your bracket here.

Billy Horschel is your defending champion after beating Scottie Scheffler 2 & 1 in an absolute rock fight on Sunday afternoon. Neither guy made a birdie after the 2nd hole. The volume of golf at this event is a major plus, but it's not without its downsides. Both these guys were absolutely gassed given that it was their 7th round in 5 days and it showed. Most guys I know struggle to handle 3 rounds in 3 days and that's with a cart. Needless to say, Sundays at the Match Play can be hit or miss. 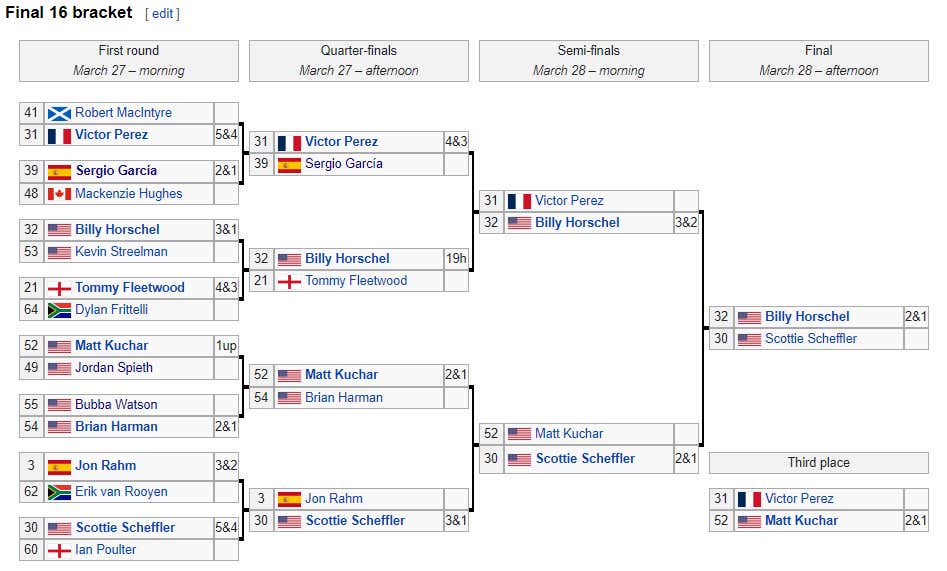 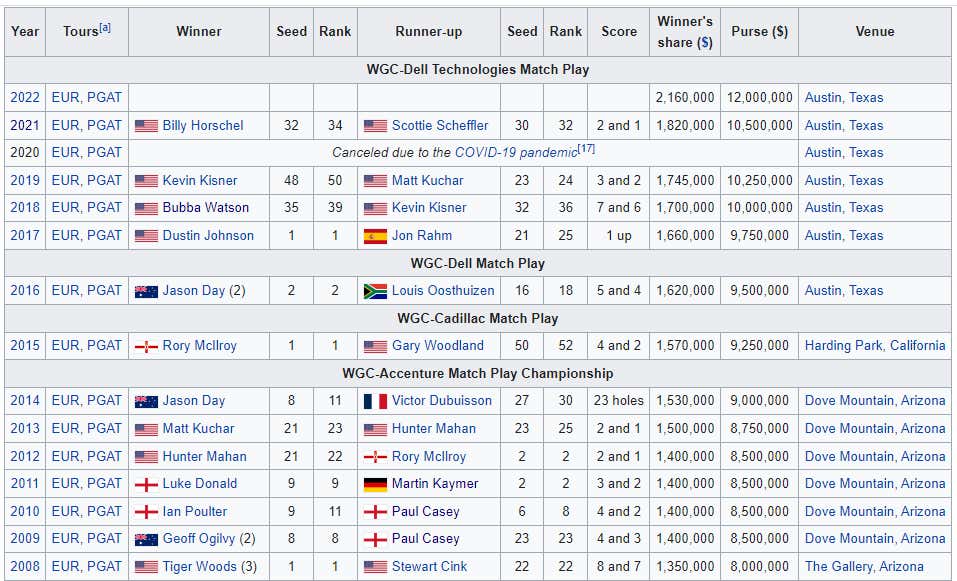 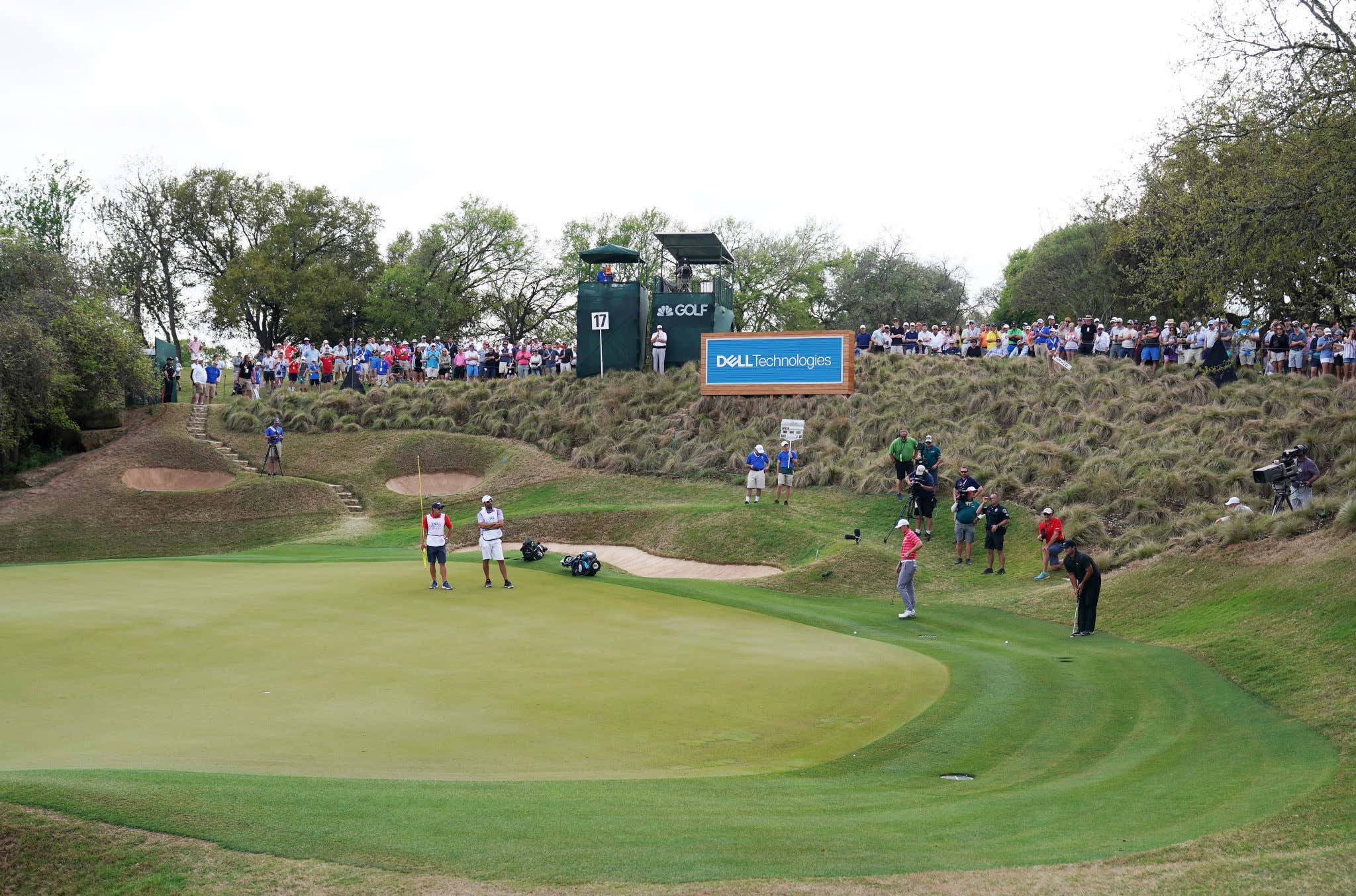 Austin Country Club is friggin sweet. Every year I'm captivated by it. I almost wish they would rotate between two different courses for the Match Play every year, and have a stroke play event at the opposite place. Maybe flip with an event like the Wells Fargo and do match play there every other year? That way we can experience ACC's tremendous finishing holes in stroke play format every other year and see Quail Hollow in a different light? Idk. Just a thought.

Anyway, Austin Country Club is a par 71 course measuring 7,108 yards designed by… you guessed it. Pete Dye. His courses are typically 2nd shot golf courses and this one is no different. That's where a player fitting Kevin Kisner's profile thrives. These greens are bermuda and typically rock hard and fast, so putting will be as key here as ever. Especially when it comes to the pressure-packed nature of match play golf.

Another area where this course is very firm is actually the fairways. I'm not sure if there's a course on Tour all year where I watch balls roll out as much as I do at this course. Lot of steep declines too where you can run balls through fairways and into rock-lined hazard areas. In very typical fashion, this Dye design finishes with a par 5 16th, a short but challenging (depending on pin position) par 3 17th, and a short par 4 where a few may even have crack at driving the green. Wild way to finish a match. 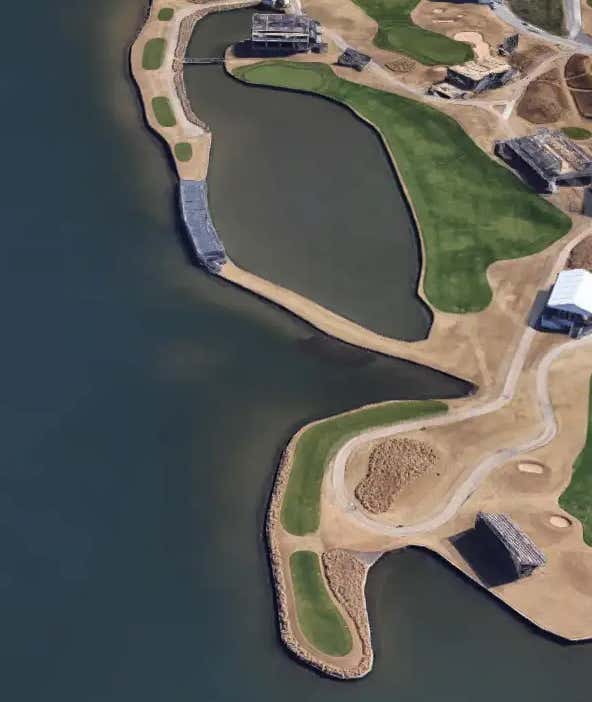 This is an AWESOME hole, especially for match play. Typically the 13th hole in an 18 hole match is right around where the stage is set and things start to heat up. If you're down multiple holes, you start to feel that pressure where you need to make something happen. Perfect time for a risk/reward hole. They may move the tee box around a little bit, but if the wind is right… some guys might have a go at this green. That could force a decision on your opponent for better or worse. And even if you do get wet off the tee, they've provided that little strip of land for you to drop and still have an outside chance of getting up and down for par. Pushes are rare here - no hole on the course has a higher percentage of being won than this one (30.4%).

You'll also see some folks enjoying themselves out with a few adult sodas out on Lake Austin, which is a fun wrinkle. 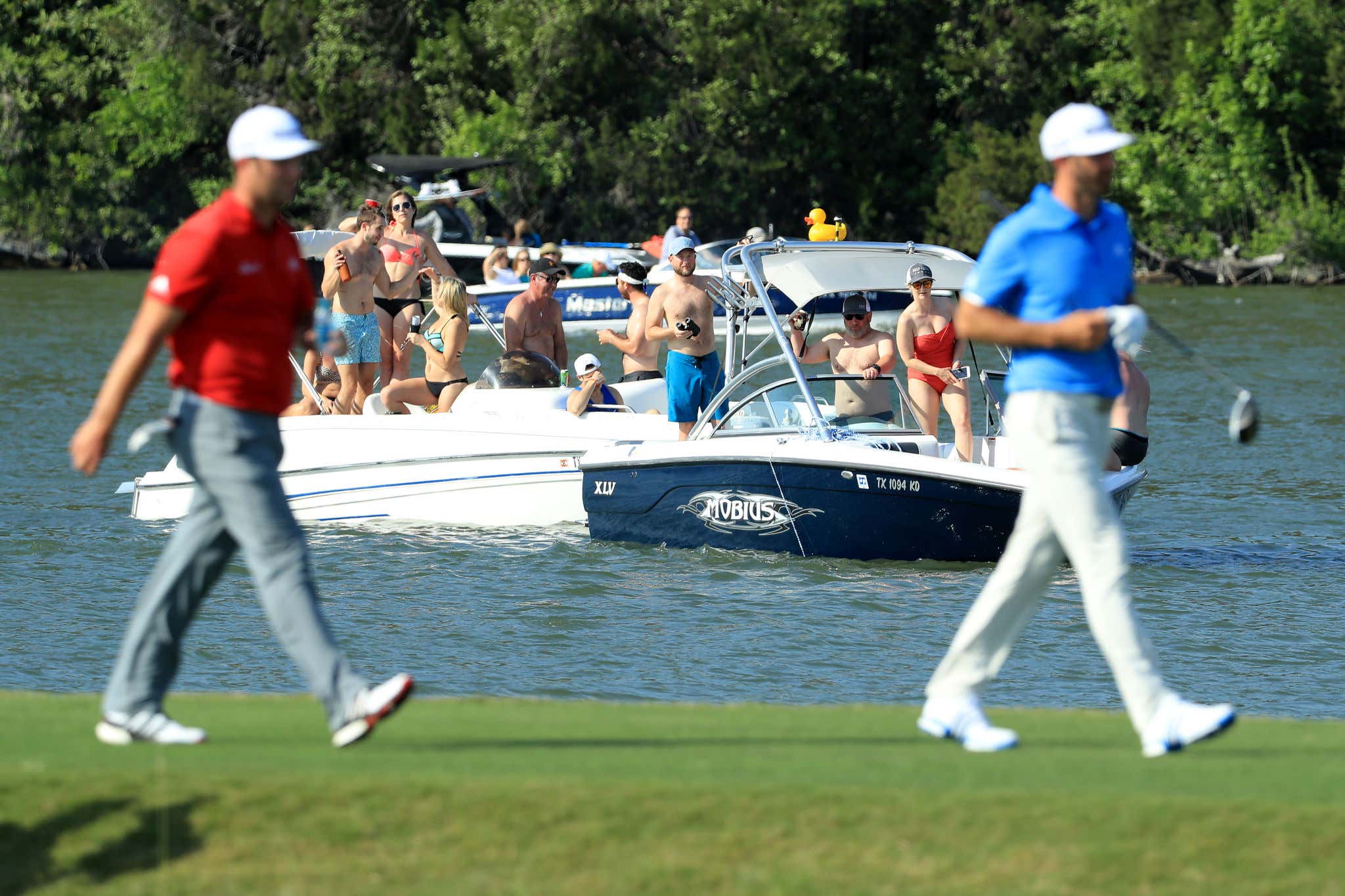 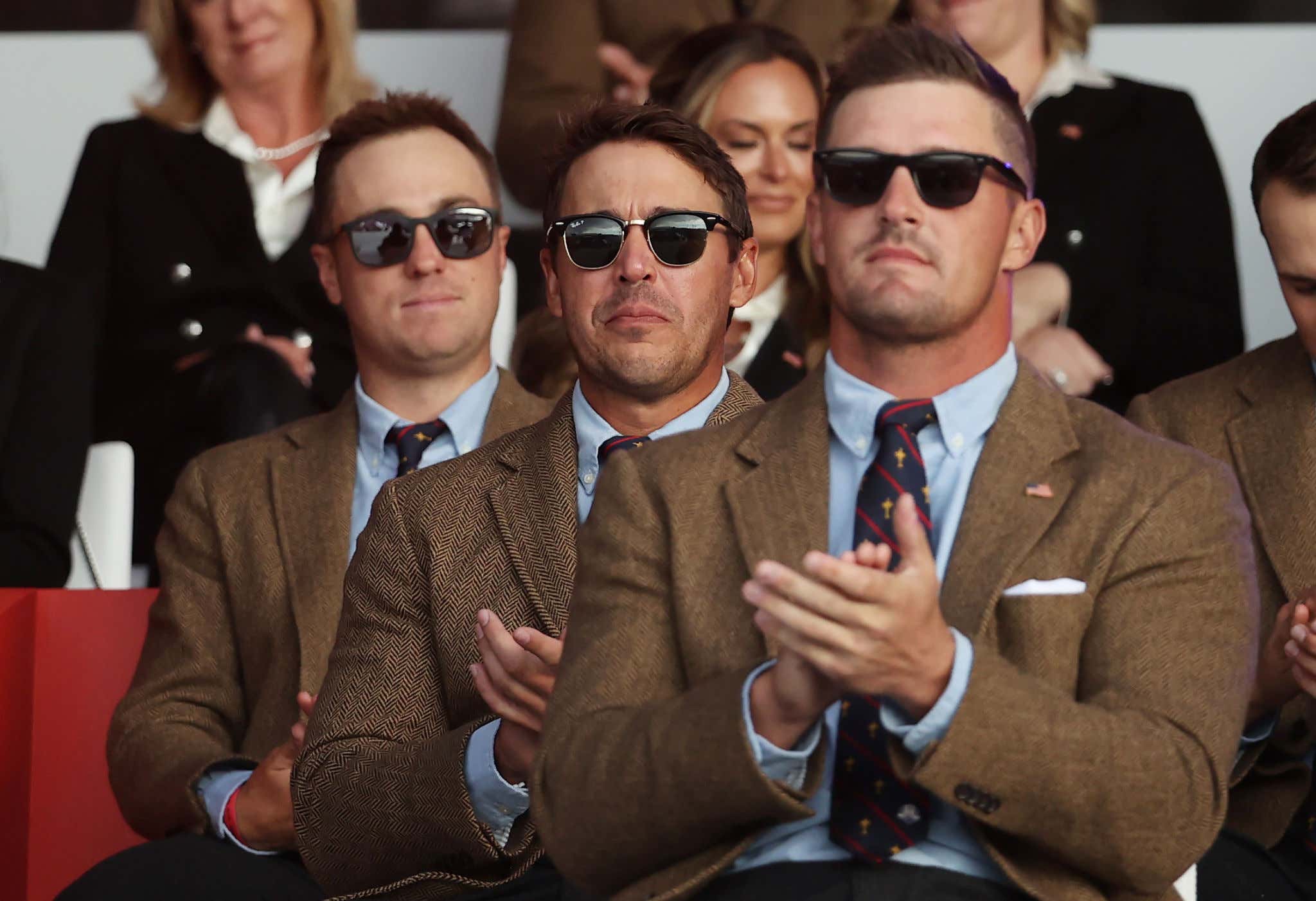 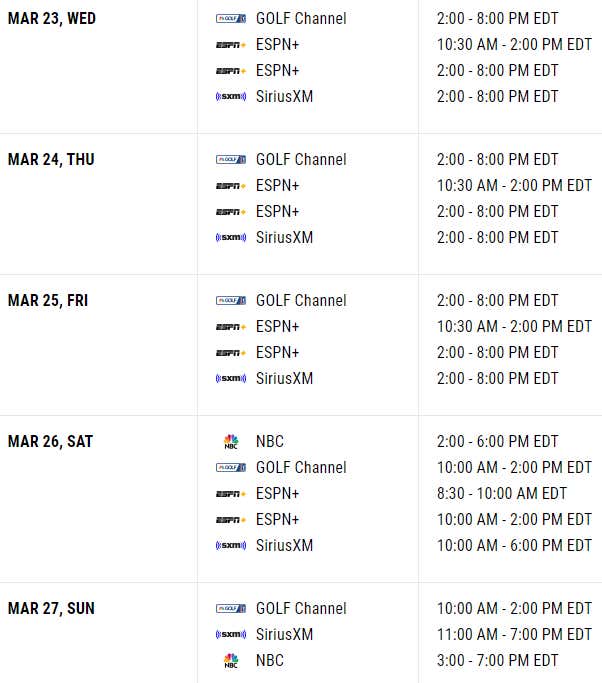 Shoutout to Nash for displaying this beautiful looking trophy. This right here is the Walter Hagen Cup. She's a beauty. So elegant. I talked a bit about the series of WGC trophies for the WGC-Concession last year here. These trophies are sweet. I love the color of this one and I'm gonna give it an 8.8/10.

Some phenomenal groups at play here. Rahm and Reed should create some fireworks. The Big Scheff tries to take down all of England. JT-Kiz. 4 major winners, one pod with Spieth, Scott, Rose, and Keegan. Lot to like here, folks. 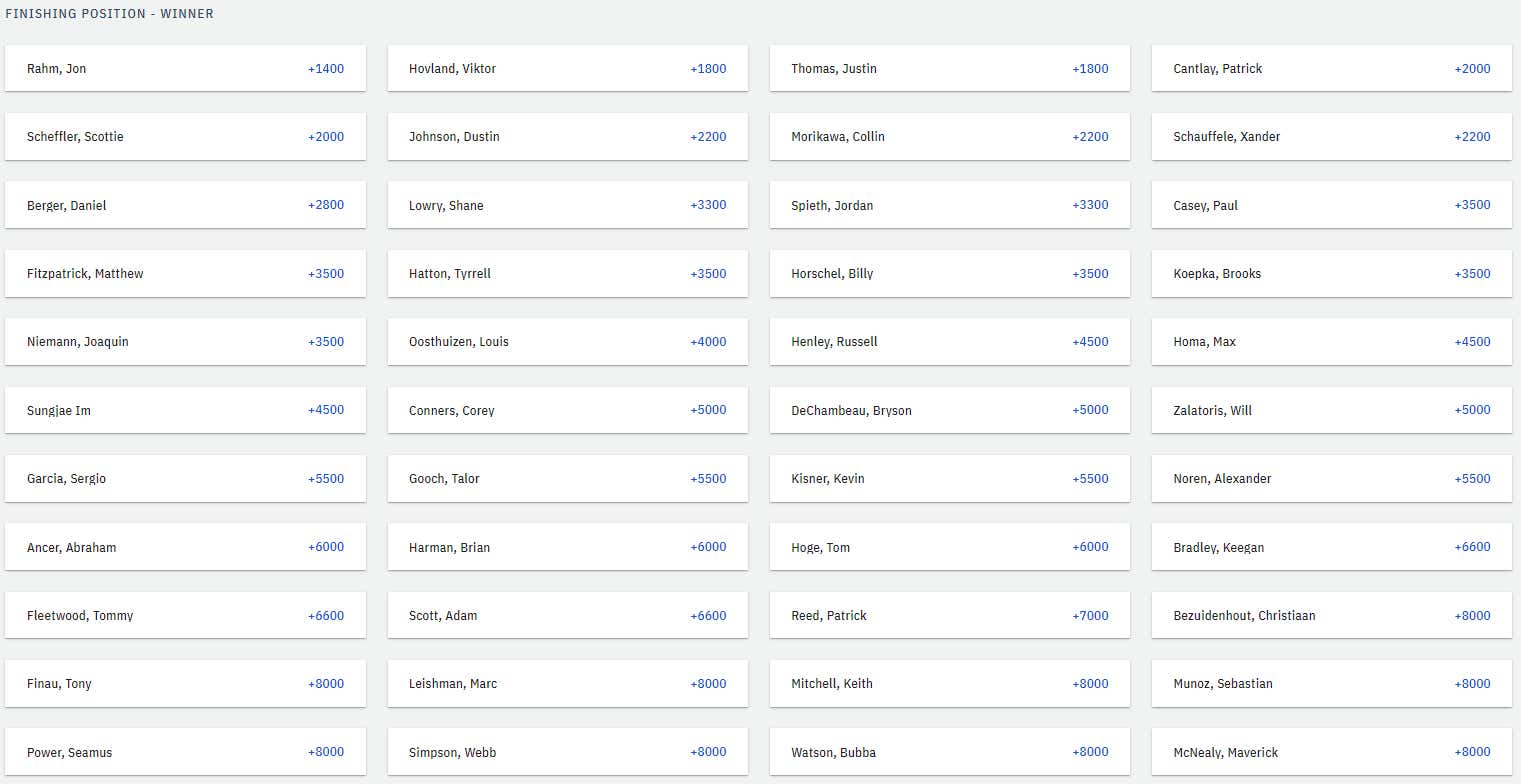 These things are typically tough to cap. A player can play his balls off and be more or less the 2nd best player in the entire tournament and find himself on the outside looking in for the weekend if he runs into the wrong guy. Plus this is just a great field. Tons of great players means that if you have an off day, you're probably not gonna get away with it. That has world number 1 Jon Rahm at the top of the board, as per usual. He's +1400 at the Barstool Sportsbook. He's made it to the championship match here before and is coming off a strong Ryder Cup last fall.

But you know who kicked his ass last year in the quarterfinals and then did it again at that very same Ryder Cup? That's right, Scottie Scheffler. He's a popular pick this week and for good reason. I said I'd have my eye on him here when he won at Bay Hill and he's gonna be my pick at +2000. It just makes too much sense. He went to school at Texas and played a ton of golf here. That showed when he made it all the way to the finals in his first pro event here, so you've got course fit. If you had any questions about him as a match play golfer, he put them to rest with a strong 2-0-1 showing at the Ryder Cup. And he's won twice in the past handful of weeks, so you know he's got a cock full of confidence and a sharp game to go with it. There's a strong case to be made that he should be the favorite here.

If you look closely at last year's bracket up top, you'll notice that hella high seeds won their round-robin pods. In fact, half of the pod winners came from the worst seeded player in that pod. HALF. So that inspired me to drill down on the data going back the 5 years this event has been held at Austin Country Club under this format:

That 23.8% had me ready to risk it all and blanket bet the D seeds to win their pods, but then I backed out last year's aberration and the percentages by seed become pretty reasonable. But that also factors in 2016's high of 8 top seeds winning their pod, so I think there's still value in swerving the favorites. Plus the recent run on middle seeds making the championship match is enough to sway me towards that strategy. I know that flies in the face of the Scheffler pick, but there's too much evidence on hand where I gotta back him. Call the rest a hedge strategy if you will. I'll call it diversifying.

Maverick McNealy (64 seed) To Win Group Group 14 +300 - Last man in the field after Sam Burns WD'd, and this might be the weakest pod with Niemann, Henley, and a struggling Kevin Na. He's only missed the weekend once in his last 20 starts, so why start now? Plus his best career finishes have come at the Fortinet, Pebble, and the Heritage. All courses that favor precision over power.

Tony Finau (18 seed) to Win +8000 - Guy's been cratering for weeks, going on months now. But he's also a birdie guy and guys who fill it up with birdies are weapons at match play. Big numbers aren't so hurtful here and 80/1 is value.

Mackenzie Hughes (51 seed) To Win Group 8 +335  - Only Bubba, Noren, and Keegan have won a higher percentage of holes here at Austin since 2018. DJ is his top foe and Homa won't be easy, but Matt Wolff stinks on ice right now.

Talor Gooch (27 seed) To Win Group 9 +190 - Nobody got a better draw here in this tournament than Gooch. I think Bryson is only here because it's a free paycheck, it's a guaranteed 3 rounds and he knows he can't play Augusta without a tune-up first. Highly doubt his body is ready to compete at a high level if he just started hitting driver again in the past week. Westwood is wily but mostly washed, and Richard Bland ain't shit.

Bubba Watson (57 seed) To Win Group 15 +300 - This line is insaaane. No way Bubba should be the longest odds in this group. I have a lot of respect for Brian Harman (dude is scrappy af and can putt the lights out… even beat Bubba 2&1 here last year) but Webb and Ancer have been non-factors since last summer. Bubba's won here before. Even waxed Kiz 7&6 to do it. He might not be playing his best, but a little respect, will ya?!

There ya have it. I'll be dishing individual match picks over at @BarstoolBanks.

Enjoy the Match Play. And buy some golf shit.