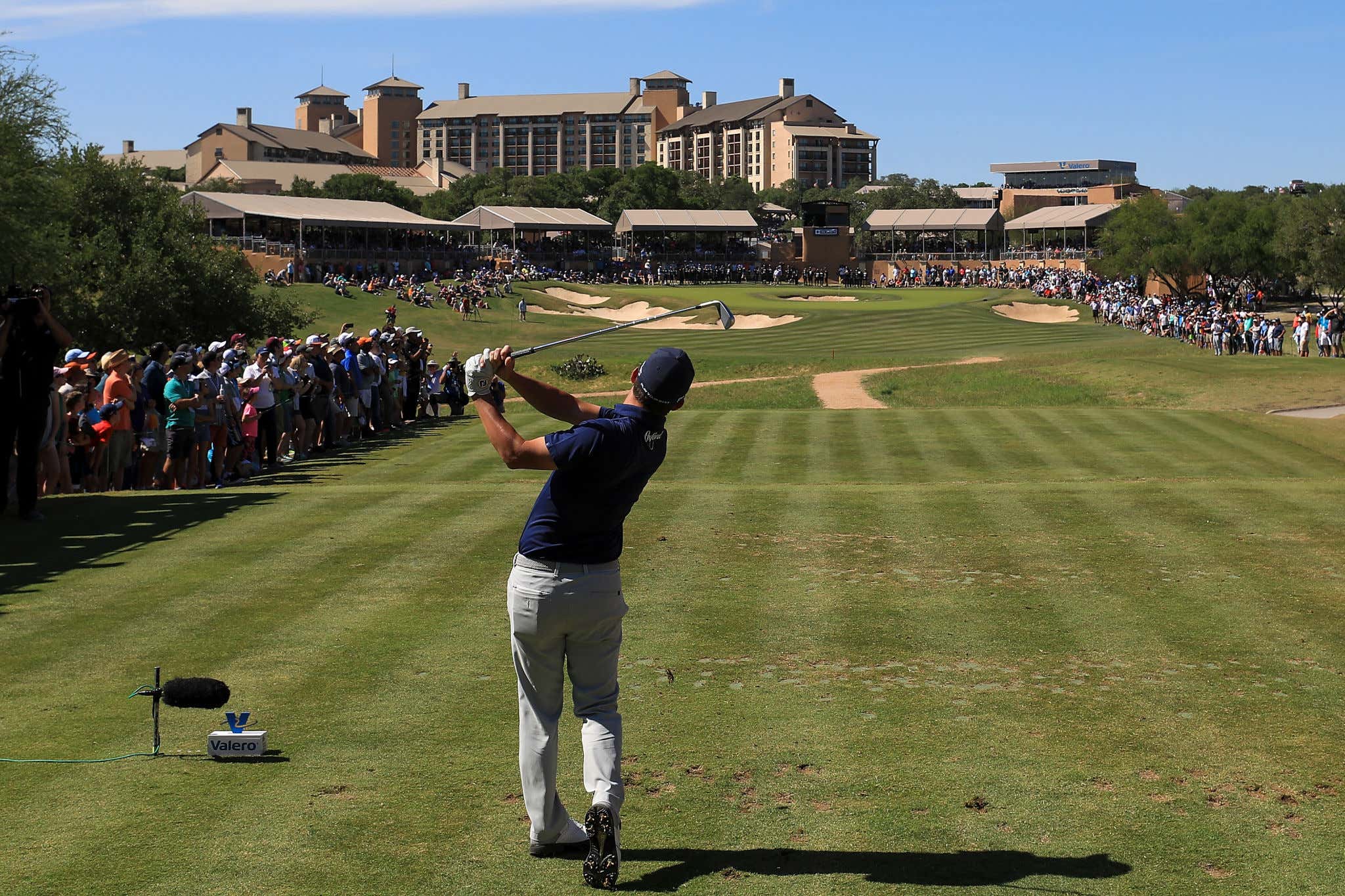 Welcome to the final stop on Tour before the crowned jewel of the golf calendar. After a fantastic week of match play in Austin, the Tour rolls a couple hours south to TPC San Antonio for the Valero Texas Open.

Last year it was Texas' favorite son Jordan Spieth who was #back in a big way after numerous close calls on his comeback tour early in 2021. It marked the 12th PGA Tour win for the kid, but his first in nearly 4 years. He fended off Charley Hoffman who they might as well just name this event after at this point. More on that later. The leaderboard and recent winners here… 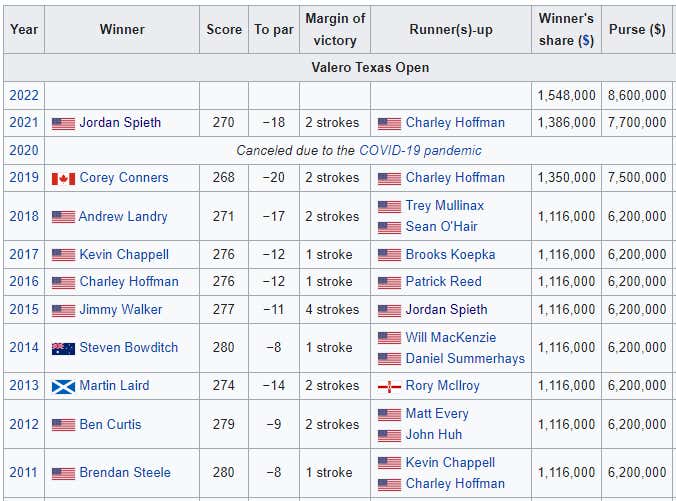 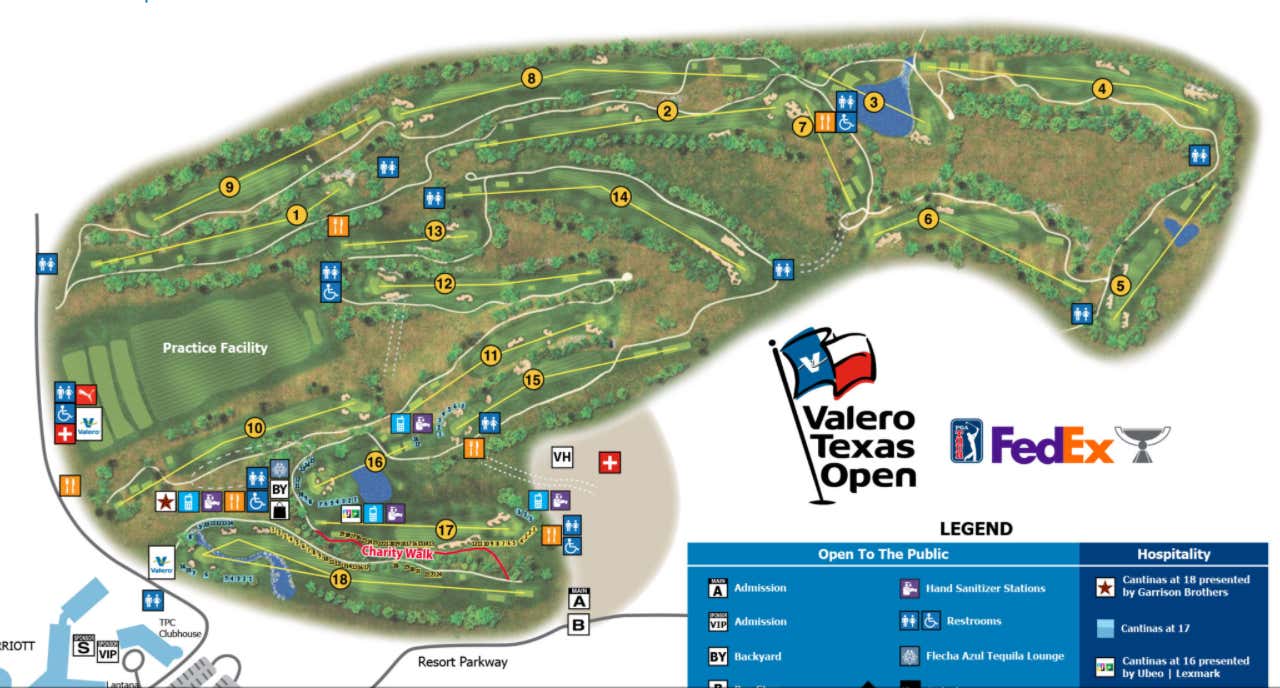 The AT&T Oaks Course is a Par 72 resort course measuring 7,435 yards and has hosted the Texas Open since 2010. Designed by Greg Norman, it features tree-lined fairways and some extraordinarily narrow greens. It's not that the greens are small. They're plenty deep. It's that they're not particularly wide. I've tried like hell to shoot low on this course on PGA Tour 2K21 and it's really damn tough to consistently hit greens. As if my video game analysis isn't enough, it's tough for these players too. It's annually among the course with the lowest GIR rate of any on Tour, historically around 57%.

To make matters tougher, wind has been known to be a significant factor at this course, some years more than others. If you can flight the ball down and power it through the wind, you're going to have an advantage on the field. The course is designed to play downhill when the wind is typically in your face, and vice versa when playing uphill. Regardless, there's never been a cut line under par since this tournament moved to this course. So yeah, this course has the potential to play pretty tough. 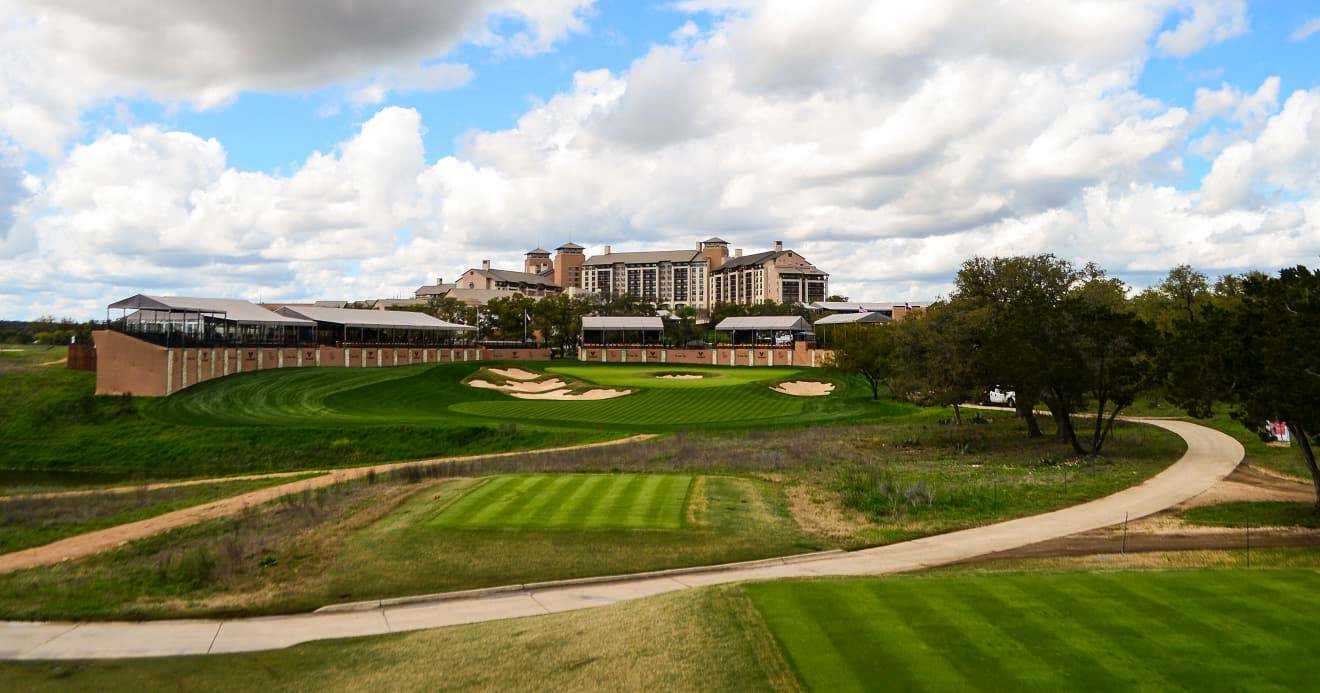 Bunker in the middle of the dancefloor?!? Bunker in the middle of the dancefloor. You really only see this twice a year. Here, and Riviera's 6th hole. It's a fun wrinkle. You can treat the green as 4 different quadrants, which I expect the Tour to do in terms of pin placements. Hitting an adjacent quadrant from the pin is as good as a missed green. Always fun to see the guys get creative and pull a wedge out on the short stuff and try to flop it over the sand. Greenskeepers may not like it, but you gotta do whatcha gotta do. Awesome view of the clubhouse/resort coming in too. The 18th is a quality finishing hole as well featuring a creek cutting vertically through the fairway, so that deserves an honorable mention. 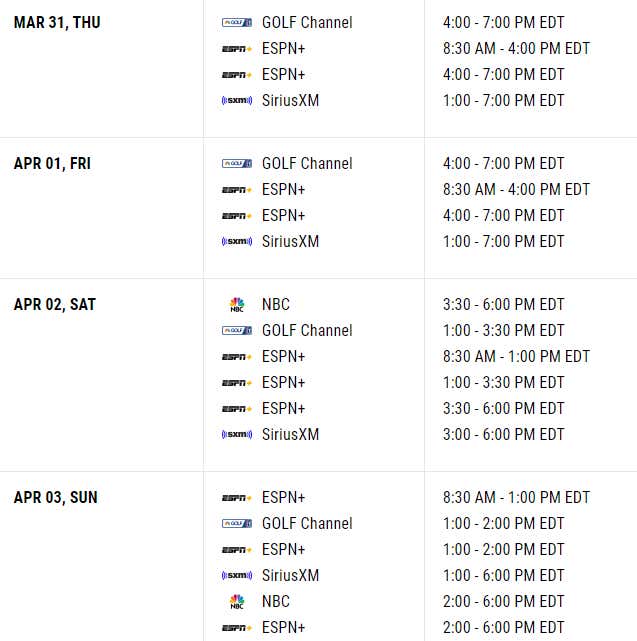 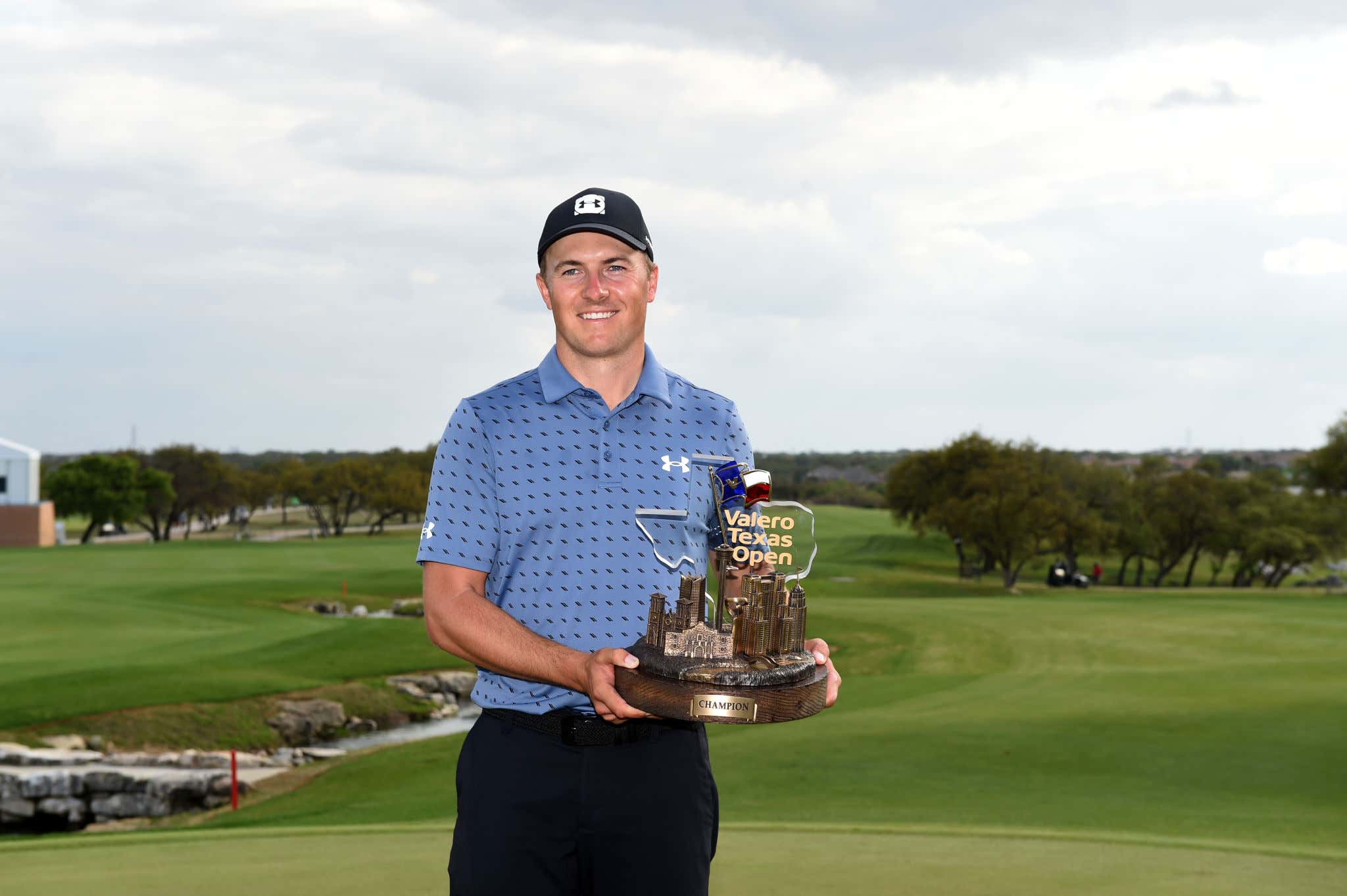 This is a pretty sweet looking trophy here. Local skyline with the Alamo up front, outline of the state of Texas in the background… it's honestly perfect for what this tournament is. It's not overly gaudy, doesn't try to be more than what it is. This is the Texas Open and this trophy captures that to a T. Bonus points for the boots gives this a 7.8. 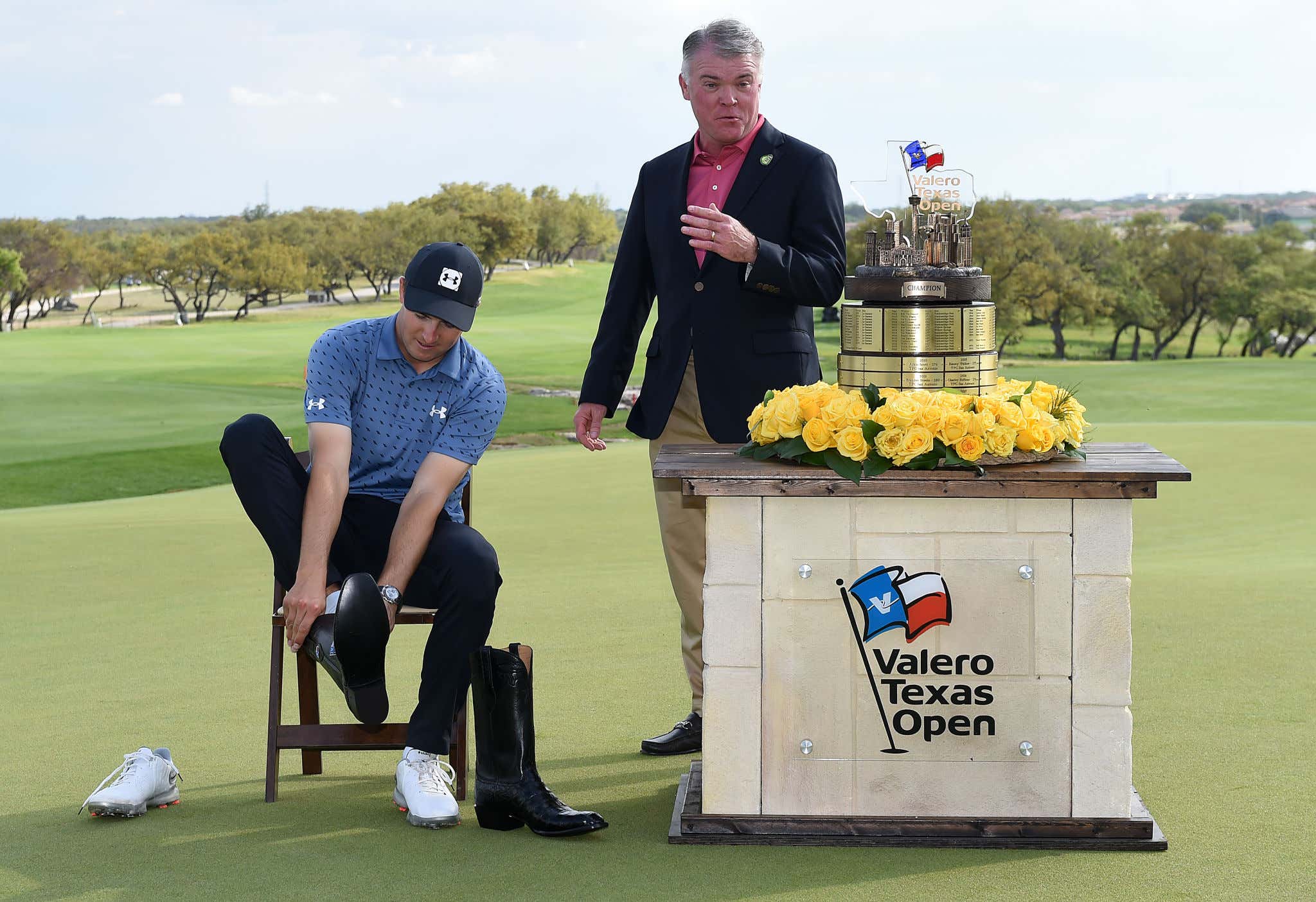 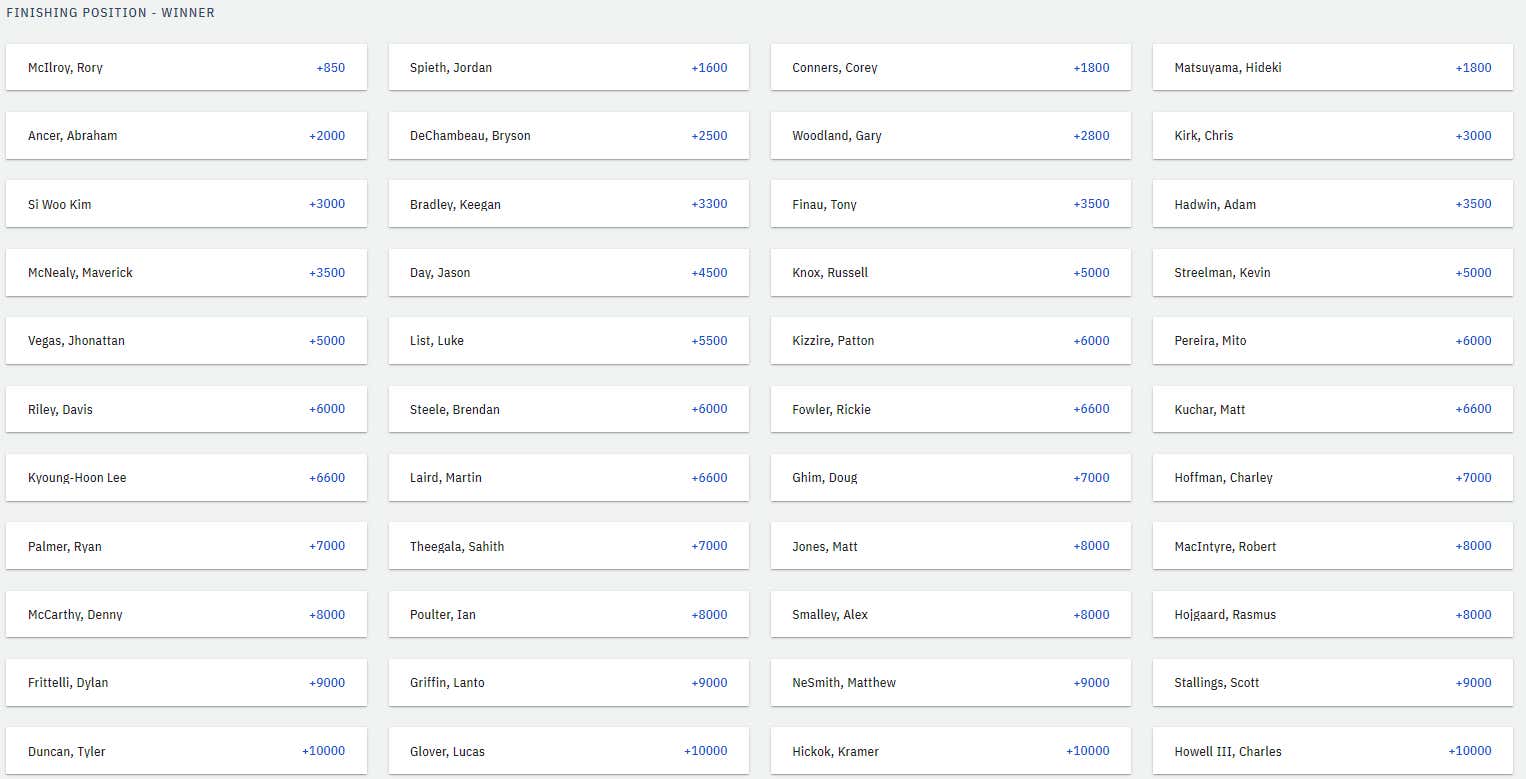 Rory McIlroy is the clear favorite at the Barstool Sportsbook at +850. I'll be honest, I'm a bit surprised that he's playing this week, especially after skipping last week's Match Play. He's played this event once, alll the way back in 2013 when he finished solo 2nd to Martin Laird.

I'm also surprised that Bryson DeChambeau is in this field having just played the Match Play last week in his first event back from injury. Augusta will be his 3rd week in a row. Odd for a guy who sounded gassed at the Fall Masters 18 months ago to put that type of stress on his body right before the biggest tournament of the year. AND THEN do another long drive competition the week after. You do you big guy.

I can't help myself. I simply have to take Charley Hoffman every way imaginable (he's now +5000 outright). This guy owns the Texas Open. He's the all-time money leader at this event and it's really not even close. Here's the list of top money leaders at every stop on Tour (leaders over $3M total, as of 1/2/22 per Golf Digest). 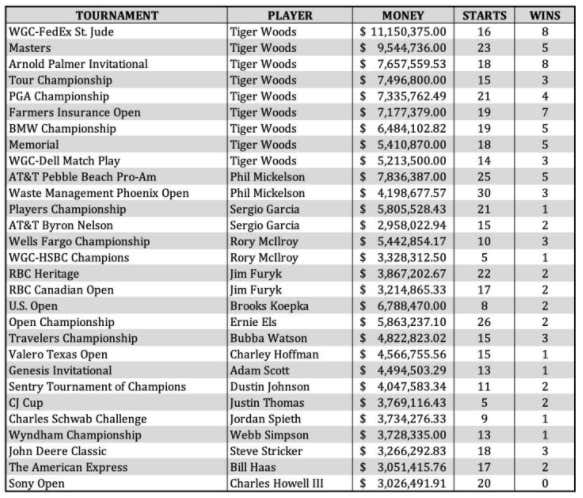 You scroll down that list and the names you see make a lot of sense as you go down and then BAM. Charley Hoffman outta nowhere pulling in over $4.5M in San Antonio.

He may be playing like dogshit as of recently but you can never count this guy out at TPC San Antonio. This tweet is from before last year's event and he went ahead and finished runner-up yet again.

I literally could not believe he was this far down the board (he opened at +9000) because he's as much a horse for this course as anyone anywhere. There is nothing worse than having a player right in front of your face and being on the outside looking in when he repeats history. Don't be that guy. Take Chuck Top 5, Top 10, Top 20, Top 40, to make the cut, whatever.

After looking more closely, he's currently +4500 Top American (vs +5000 outright). With the favorite (and 3 of the top 5) as international guys, this is a no brainer. I might get a phone call from the Sportsbook folks for outing them on that but fuggit. I'm a man of the people

Abe Ancer To Win +2000 - Superior ball-striker. San Antonio native. Showed some signs of life last week when he roasted Morikawa 7&6 before running into a hot Corey Conners in the quarters.

Maverick McNealy To Win +3500 - Another guy who's played well on courses with small greens. Made 20 of 21 cuts and went 2-0-1 at the Match Play including a trouncing of Joaquin Niemann 8&6, but got bounced by Kevin Na in a playoff. He's getting close to a break through.

Doug Ghim Top 10 +600 - Ball-striker type that finished T-6 at Sawgrass in his last start. Played at Texas so he knows this type of golf.

Guido Migliozzi Top 20 +900 - 5-time winner overseas is stateside to play the Masters after finishing T-4 at last year's US Open. Not playing great right now but I think he'll be motivated to find his form and earn some rare FEC points.

Anirban Lahiri Top Asian +750 - This is his first time teeing it up since coming up a shot short at Sawgrass. Fascinated to see if he's actually found the form that had him in the world's Top 50 for most of 2015 or if that was just lightning in a bottle.

That's all I got. We're so close to Augusta. Can't wait.