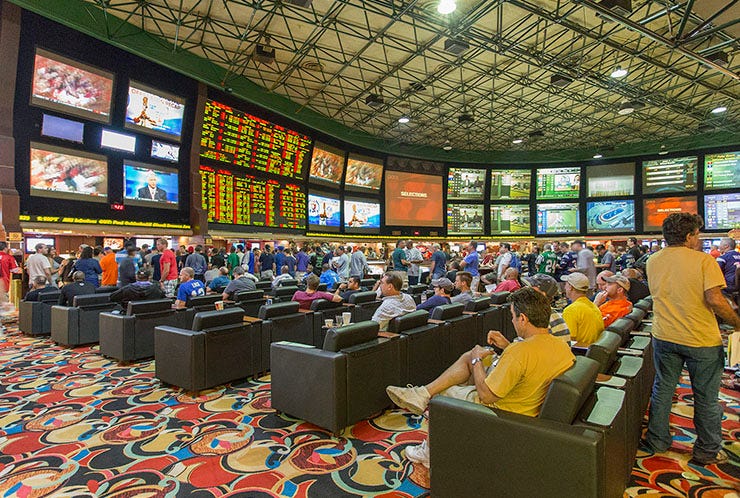 Another heavy dose of NFL games this weekend via my friends at OddsShark.com 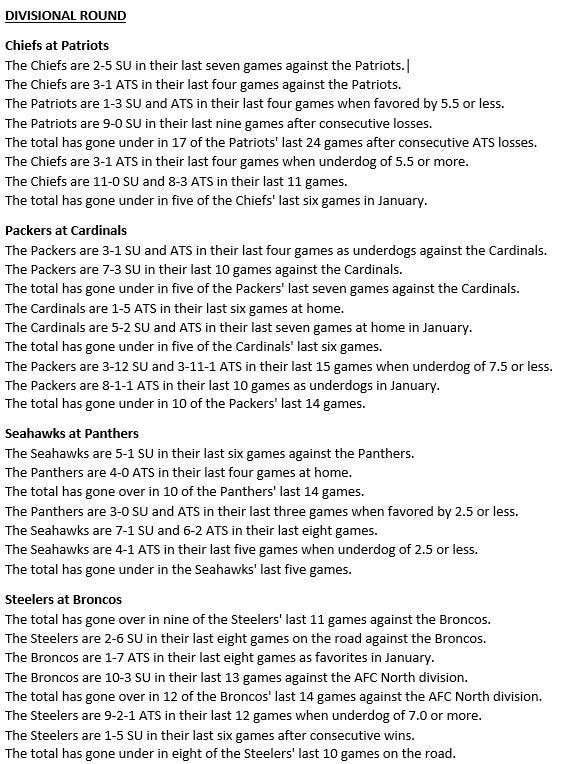 Welcome Back to Bosco’s Bets presented by OddsShark.com.  Here’s some quick stuff :

– My 5 unit Steelers +1800 Super Bowl future looks dead again, as Big Ben’s shoulder and Antonio Brown’s concussion will limit both players. After last week’s hedge I’m in for 7.75 units, and with Denver -360 on the Money Line. There’s no real way to hedge back. Things happen. Let’s hope the Steelers pull out a miracle this weekend.

-NBA has a slate of 9 games tonight. Full odds here. If you didn’t jump on my Golden State Western Conference Champion future and are looking for a team with a little more value. The Spurs are currently +250.

-An update on last week’s Playoff Fantasy pool is here : 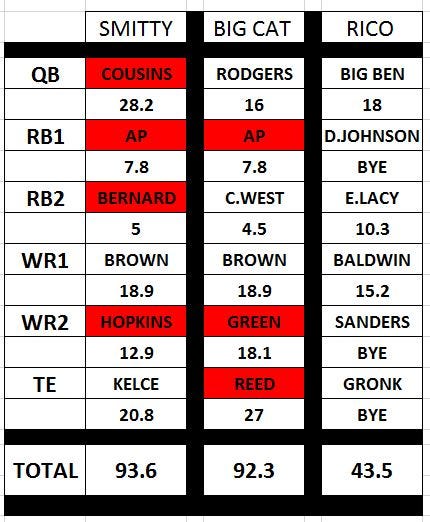 I am behind for sure, but I had three guys on a BYE and am the only guy left with all 6 players going, however injuries to Big Ben and Gronk scare me.

Freshman forward Roland Griffin (22.9 minutes/ 6.3 ppg) will likely miss his fourth straight game due to a toe injury. Illinois State shoots and UNGODLY amount of three’s. 117 in their last 5 games to be exact. In fact, The Redbirds Three Point Rate (3pt fga/ total fga) is 36.6%. The interesting thing is they only shoot 31.6% from behind the arc.Evansville holds opponents to 32.4% from 3, but here’s my favorite. Evansville holds opponents to a 23.2% offensive rebound percentage (5th lowest in the country). So if you follow here.. Illinois State shoots a ton of threes, doesn’t shoot them well, and likely won’t rebound offensively. Sign me up again for my boy Egidijus Mockevicius (#55 in that highlight), the 6’10 Lithuanian who’s pouring in 17.3 ppg, while grabbing 14 boards to use his experience over Illinois State’s starting freshman center. Last note, Evansville got swept by the Birds last season. Like the motivation for revenge. Last nugget, if it is close – Illinois State shoots an unimpressive 62.3 % from the line.

- Manhattan (Pick Em) just went up to Canisius last week and won. Tonight they return home to finish out the season series. Canisius has been a bad defensive team all year, and even worse on the road. Giving up 80,81,92,84,81 points their last five. Rick Pitino disciple, Steve Masiello is a good coach for the Jaspers and expect him to exploit Canisius on defense again. Also worth noting- Jimmy Baron of Canisius has NEVER won in Riverdale. Like Shane Richards to be the key here.

While the public was all over the Steelers,Seahawks, and Skins last week (0-3), he was 3-0. We bring him back again this week after many requests. Here’s what he’s got :

“I said last week that the Seahawks were overvalued in the betting market at -6 for their game versus the Vikings and this week is no different.
The media has been pumping Seattle the past few weeks and driving their spread up to -6 last week and just +1.5 this week but everyone forgets that this team lost to the Rams at home just 3 weeks ago. Everyone’s in love with the Seahawks blowout win over Arizona 2 weeks ago but when I took Seattle +7 as one of my top plays that day - Arizona wasn’t playing for much and could have only advanced in the standings if the Panthers lost to the Bucs (which was a longshot). The Hawks came in off a loss wanting to sharpen up before the playoffs and that explains the blowout.
Seattle was very fortunate to get out of Minnesota with a win – forget the Blair Walsh botched field goal – Minnesota dominated Seattle at the line of scrimmage all game and shut Seattle out through 3 quarters. Take away Russell Wilson’s heave to Tyler Lockett and the Hawks may not have even scored a touchdown last weekend. The Vikings pressured Wilson all day and forced him into average 13 for 26 day with 1 TD 1 INT and 2 sacks.
Carolina is getting disrespected a bit with this line being just -1.5. This was a team we were just talking about almost going undefeated who has already beaten Seattle this season.
I believe this game is won at the line of scrimmage. The Hawks have an incredible defense.They have a great playmaker in Russell Wilson and skill players all around him but Carolina’s defensive line is one of the best in the league and the Seahawks are 28th in the NFL in offensive sack percentage. If the Panthers are able to replicate what the Vikings did last week (which they can) then I expect a tough day moving the ball for Seattle.
Jonathan Stewart is healthy for this game which only helps Cam Newton. The Seahawks had trouble stopping Greg Olsen last game as he grabbed 7 catches for 131 yards the last matchup.
Facts: Teams in the Divisional Round off a bye are 12-4 SU the last 4 years. NFC #1 seeds are 21-4 the last 25 seasons in the Divisional Round
This should be a close game that may be decided on the last possession but I’m rolling with the team that’s been better all season at home versus a slightly overvalued team flying cross-country for an East Coast game at what is 10 AM Seattle time. PANTHERS -1.5.”
Hey Spread Investor cue up Petey Pablo for me. Let’s go Panthers ! Mention you are a Rico Rider when contacting him for his full card.

Have a great weekend everyone . Rico Riders enjoy the games. Hank…enjoy your 3 day weekend. You deserve it !

CFB YTD: +31.15 units College Football 2015-2016 Season, 25-22 YTD College Basketball via Twitter . For all stats and trends check out OddsShark.com & follow @Rico_Bosco on twitter for all my other picks, Bachelor analysis, my love of Arizona Iced Tea, and overall entertainment.

Earlier this week I appeared on Storm The Court Podcast with Reags (@BarstoolReags). We gave contenders, pretenders, thoughts on Valpo, Providence’s ceiling, as well as a great future stat for teams in the NCAA Tournament. Check him out each week.