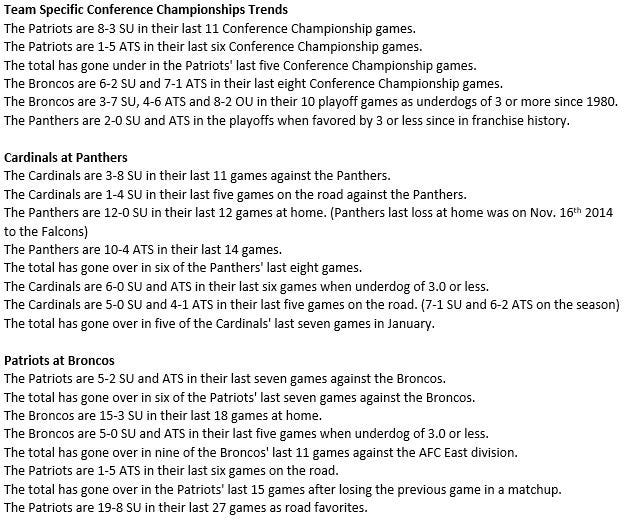 -Brady and Manning obviously have a history against each other. Here’s the trends via OddsShark.com for those previous games.

- I have officially locked up the friendly NFL Player Fantasy Player Pool between Big Cat, Smitty, and myself in pretty easy fashion, having 3 players still left, and guaranteed to have 1 (Sanders or Gronk) in the Super Bowl. Congrats if you got paid off following my picks in a similar pool. Full breakdown below : 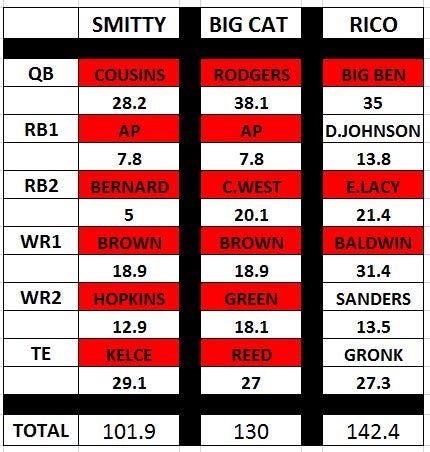 -I will not pretend to be an expert on the subject, as I have boycotted them since Good Will Hunting didn’t win Best Picture. I do still stand behind my claim that Julia Stiles will not only win an Oscar in her lifetime, but multiple Oscars. I wish I could place a future wager on that. I love her acting chops, she just needs the right role. If you are into that sort of thing … there are 2016 Oscars odds. At a quick glance, the favorites have money lines so high they make Mayweather’s old -450 or -550 lines look like a bargain.

-For you real degenerates, The WWE Royal Rumble this weekend has odds.

-Michigan State hosts College Game Day this weekend versus Maryland. I asked my guys at OddsShark.com how Game Day has gone for the Spartans historically, and here’s what they had :

- Tonight’s NBA slate has odds and trends via OddsShark.com for you right here.

- OddsShark.com has you covered for the NHL tonight as well.

- Kansas now leads the pack as favorite to win the NCAA tournament. I gave them out at +800, they have moved up slightly to +700. Xavier is at +1800, a huge bump from when I gave them out at +6600. One quick team that jumps out is Texas A&M +5000 , they have great efficiency via KenPom and have racked up 5 TOP 50 wins. I worry about Billy Kennedy (former Murray State coach) only being to 2 NCAA tournaments in his career, and I’m not necessarily pulling the trigger myself, but I can’t say those odds aren’t tempting in a year where it seems ANYONE can win it.

The Jazz are on a road trip that started off with a loss in double overtime to The Hornets on Monday. Wednesday they lost in overtime to the Knicks, and tomorrow they have a decent Wizards team (if the snowstorm doesn’t wipe it out). Tonight they have the Nets. I think understanding a team’s mindset can be a valuable tool in handicapping, and that’s why I’m on the Jazz tonight. Jazz coach Quin Snyder has got to look at this trip as best case 2-2. However, the worst case for the trip is 0-4. The Wizards are better than the Nets so it’s definitely not a lock they’ll win tomorrow, which means to avoid  the disastrous 0-4 trip, they NEED to win tonight.  Utah is 1 game out of the 8 seed in the West, which makes games versus horrific teams like the Nets a must win. They had an off day yesterday, but it’s worth noting after they have stayed in the same hotel likely since Tuesday. May seem like a small detail, but not having to fly out of somewhere after the game Wednesday allows for a little extra rest. On road trips, extra rest is hard to come by.

The Jazz are likely without Derrick Favors again tonight, but I’m really not concerned. Joe Johnson is mailing the season in like no other, and the Jazz are fighting for a playoff spot. Give me Utah, and my boy Gordon Hayward to get the job done tonight with a convincing 10-12 point win, after two tough overtime losses to start the trip.

You knew it wouldn’t be a Friday night if I wasn’t giving you a hoops pick. Earlier this year I was ready to write off Fairfield as another small school disaster of a team in a small conference. Now, they aren’t exactly setting the world on fire at 9-9, but it’s a testament to what Sydney Johnson is doing with this team. Led by 6’6 swing man Marcus Gilbert (18.9 ppg) , Fairfield has grabbed wins against Niagara, @ Rider and vs Dartmouth in the last month. Marist is a one trick pony with Khallid Hart (22.8 ppg), stopping him will be the key to victory.

Both teams here take 40% of their shots from behind the arc, so expect an up and down contest, but when given the opportunity I’ll always take the better team. I like Fairfield to expose Marist’s 319th ranked defense. Last note : Sydney Johnson is 5-3 all time versus Marist in the regular season during his tenure, but his only road win came back in 2012. Like him to be extra motivated to grab a win tonight.

All week people have been asking where “my guy” The Spread Investor is. Begging me to bring him back to give out another winner. Lucky for you savages, I enjoy helping others, and  I was able to get in touch with him after his research and before this snowstorm. Guy is on fire, and been giving Rico Riders back to back winners as guest here. A red-hot record of 5-1 in the playoffs as well as 14-5 the last 5 weeks , he’s +18.5 units in the Playoffs and +50.8 YTD. I’ve said a million times “always have a guy”, and Spread Investor as my NFL guy is paying off for sure. He’s back again this week :

” Both of these offenses can get up and down the field in a hurry and Arizona has shown all season that they will throw the ball often no matter what defense they face. In 3 of Arizona’s biggest games this year Palmer had 47 pass attempts vs. Seattle, 31 vs Cincinnati, and 41 vs. Green Bay. Arizona and Seattle combined for 71 points in their first matchup. Arizona also combined for 65 points in their matchup with Cincinnati. Both of these teams have comparable defenses to Carolina so there is no reason Arizona can’t put up a few touchdowns in this game.

Where this game gets interesting (and what hardly anybody is talking about) is that Carolina has played the last couple of weeks of the season without their #2 and #3 cornerbacks, Charles Tillman and Bene Benwikere. Carolina signed cornerbacks Cortland Finnegan and Robert McClain off the street towards the end of the season and Russell Wilson was able to pick on both of these backs in the 2nd half last week to the tune of 24 points. Both backs will have a big challenge ahead of them as Finnegan will be covering Larry Fitzgerald in the slot (who has 6 inches on him) and McClain will draw Jon Brown who loves to stretch the field as he topped 1,000 yards this year and caused the 2nd most pass-interference penalties in the league this year. With an offense that likes to attack down the field early and often, expect Palmer to target a weakened Panthers’ secondary.

Cam Newton’s designed runs combined with the fact that Arizona struggles to cover tight ends puts the OVER in a good position to cover here. Throw Jonathan Stewart’s running ability into the mix and you have an explosive offense that’s hard for even Arizona to defend.

With a team who loves passing the ball and another team with a dominant mobile quarterback, my money’s on the OVER in this one. “

-He’ll be selling the side in this game tonight at 5pm. Mention Rico when contacting The Spread Investor for his full card.

Best of luck to everyone out there this weekend, stay safe with this weather. Shout out to my man Hank, who was the first guy on the battle lines when I needed him this week. I hope the Pats win and you get to enjoy another Super Bowl week of luxury. Bonus Pick : I’m on Pats -3. Manning stinks. Have a great weekend Rico Riders.

CFB YTD: +31.15 units College Football 2015-2016 Season, 33-27-1 YTD College Basketball via Twitter . For all stats and trends check out OddsShark.com & follow @Rico_Bosco on twitter for all my other picks, questions, Bachelor analysis, and overall entertainment.