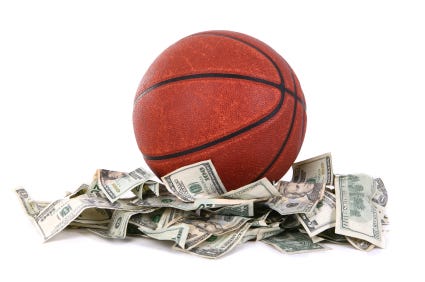 After a stunning upset of The Patriots, despite multiple guarantees from the boss Dave Portnoy, the Super Bowl is set up and it’s chalk city. Both one seeds advanced with the Broncos vs Panthers now matching up for Super Bowl 50.  The props aren’t out just yet, but below are some early trends via OddsShark.com. 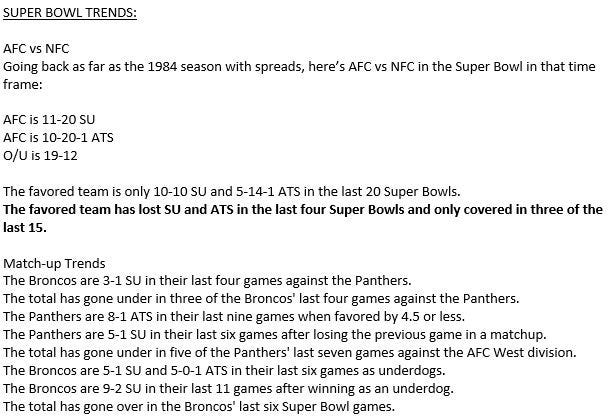 Welcome back to Bosco’s Bets presented by OddsShark.com . It’s a light weekend of sports with the NFL prepping for the Super Bowl, and at time of print no official lines on the Pro Bowl or NHL All Star Weekend. Tomorrow’s college hoops slate is nothing to write home about so I’ve moved things up a day because I liked a lot of college hoops tonight. Before we get to that here’s some odds and ends.

– The official spread for The Super Bowl is :

As Big Cat previously stated,  he thinks Carolina “is the most disrespected 15 win team of all time.” I can’t argue the opening line (-3.5) seemed like a big overreaction to The Broncos win , and not nearly enough about the Panthers basically cruising through the playoffs thus far. I haven’t fully made up my mind on the game just yet hoping it will drop back in favor of The Panthers, but all things seem to point to Cam dabbing before hoisting the trophy and Daddy Dixie celebrating. If you also haven’t made up your mind just yet, here’s OddsShark.com ‘s  take on why the Panthers will win and cover, and why Denver will win and cover .

-Tonight’s NBA Slate has a 6 pack of games. Full odds via OddsShark.com

-Marquee Matchups of ranked teams in College Hoops tonight is headlined by #3 Iowa at #8 Maryland aka Nate vs Trent. The line sits at Maryland -5 O/U 147. The late night game is #23 Oregon traveling to #18 Arizona. Wildcats are laying 8, with the O/U at 151.

I talked to Nate who said, “I like the Terps to win, Iowa to cover. Over 147 if I had to pick the side of that. Should be a close game, but Maryland knows they can’t afford to lose back to back big games and I expect Melo to really shine on the big stage.”

Trent was much more aggressive : ” Eff the Terps ! Iowa outright. Uthoff cements Iowa as best team in the conference by emasculaing Melo Trimble.”

Asking what I think, I would agree it’s going to be very close as well as entertaining. Gun to head, I always lean Melo Trimble at home.

-Night Owls/ Full Blown degenerates will be interested in the 3:30 am (EST) start of Murray and Raonic. Consensus of books have Murray as a -275 favorite .

-With the NHL on break before the All Star Game, it’s a good time to look at Stanley Cup Futures via OddsShark.com. I will tell you flat out I’m not a hockey guy, but as The Rico Riders know, I always have a guy. You’ve already met Spread Investor the past few weeks for NFL. And as this column continues to move forward, you’ll meet more and more of my guys.  My NHL guy is no expert, nor a pro handicapper, but I respect his opinions nonetheless. Meet East Bar Greg Pinto. Follows hockey religiously, and has predicted a few playoff upsets outright during our conversations.

Here’s what he likes on some of the teams with value :

” Florida Panthers +1600:  After years of being a punchline in the NHL, the Florida Panthers are no longer a team to be taken lightly.  Led by Veteran Goaltender Roberto Luongo and a league best 2.18 Goals Against/Game, this team is poised to make a deep run in the playoffs.  Also, they have a Spacey in Space hoodie, and that’s just awesome,

Dallas Stars +1000: While Dallas doesn’t have the incredible goaltending play of some of the other top teams, they do have 2 legitimate offensive superstars in Tyler Seguin and Jamie Benn.  Their 53 and 58 respective point totals are good for second and third in the leauge, and contribute to a 3.2 goals per game average.  Niemi has been above average in net, but a few flashes of brilliance would be all this team needs to be a scary opponent in the playoffs.

Longshot:  Montreal Canadiens +2500:  It would be easy to forget about the Canadiens as they slip into 5th place in the Atlantic Division, but now may be the best value you will get on the Habs.  Carey Price was playing like the best Goaltender in the world before his Lower Body injury in November.  Price was skating this week, but the GM said it could be another 3-4 weeks until he returns.  If the Canadiens and P.K. Subban can keep themselves in the wild card picture until Price gets back, I think they could be a tough out in any playoff series. “
I’ll make sure to get Greg’s take on All Star props, and Skills Competition once they are released, follow me on Twitter if interested in those.

Texas San Antonio is pitiful. Rated 337th overall, sporting the 344th worst overall defense via KenPom.com. I got turned onto LA tech a couple of years ago when they were expected to win their league and would have been a dangerous 12-13 seed. Always athletic, and very fast paced. This year’s team is the same specimen playing at a very fast pace (54th in country). I’ve tweeted them as a pick before, and I really like their spot tonight early on.

They don’t screw around. UTSA plays at a fast pace as well, which I think hurts them even more. Rico Rule : Never get into a track meet with track stars. La Tech has track stars. Big margin early on here.

I watched Hofstra vs Elon earlier this year. Elon lost by 4. This game is at Hofstra so I get Hofstra should win by 5-6, but not 12 in my opinion. I know both teams will shoot a TON of three’s tonight. But there wasn’t one big thing about Hofstra that gave me the impression of a blowout. Especially that they play virtually no D, and have a 6 man rotation. Worst case , even if Hofstra gets up 10-15 at some point. I like Elon’s chances to drill a few threes when no one (expect Vegas) cares.

Tough stretch for Towson coming up soon with trips to College of Charleston and Elon. Games like this vs Drexel are a must win to stay above the middle of the pack within the conference. They beat Drexel by 19 just 12 days ago at home, and I still can’t figure out why the Top 100 defense of Towson is being disrespected to a 1 possession game vs the nation’s 312th rated offense of Drexel.

UIC is virtually an automatic bet against at this point. Jerry Slocum of Youngstown State is 1-5 in his last 6 trips to UIC, which makes me like it even more. Must win for him here tonight, especially with Valpo, who already routed them by 30, on deck.

Another Rico favorite. The Tribe fresh off an embarrassing 32 point loss to Hofstra, take their 42nd rated offense to Delaware tonight. Delaware’s losses to teams within the Top 100 this year : 19,30,10,10,18 and 9. I see it as this. If William and Mary wins, they’ll cover- based on Delaware’s inability to stay with more talented teams. Also love W&M shooting 37.9 % from deep.

VMI use to be an automatic over. They were the team that scored the most in the country for what seemed like forever. That streak has ended, and they now play a much slower pace (209th). Mercer is off two tough overtime road losses, but has held opponents to 60, 49, 47, 43, 50, 65, and 69 points when at home. Love Mercer to use a garbage opponent to get things right at home.

LOCK OF THE WEEK :

UAB started off 3-3. They are now 17-3. Quick reminder, this is the team that beat Iowa State last year in the NCAA Tournament. They returned their three leading scorers from that team (Cokley, Brown and Lee).

My man Reags warns me to avoid the small road favorites, but I watched this UAB team dismantle North Texas in the 2nd half Saturday after a slow start, and I trust them as the better team here tonight.

Well wishes to my friend Hank back on the bus cruising the country. Be safe brother. Have a good night Rico Riders !

CFB YTD: +31.15 units College Football 2015-2016 Season, 44-33-3 YTD College Basketball via Twitter . For all stats and trends check out OddsShark.com & follow @Rico_Bosco on twitter for all my other picks, questions, and overall entertainment.