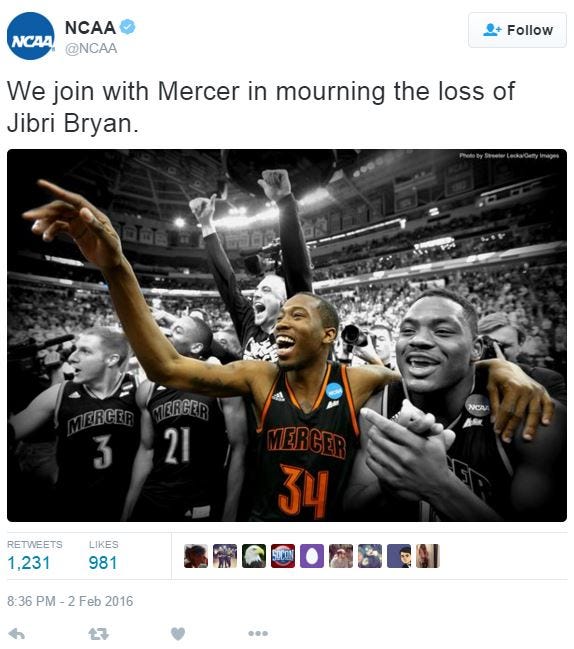 The Telegraph- (Macon Ga) : A shooting Tuesday in the parking lot of a downtown Macon convenience store left a Mercer University basketball player dead and another man — possibly the gunman’s cohort — critically wounded. Jibri Bryan, a 23-year-old guard and graduate student from Savannah, was shot in the head with a pistol. He was found in the driver’s seat of a late-model Chevy Monte Carlo that was backed into a space beside the Forsyth Street store, Bibb County Sheriff David Davis said. The gunman apparently fled in a white 2012 Nissan Sentra that was recovered abandoned on Orange Terrace at about 9 p.m. Tuesday. The car is being processed for evidence at the Bibb County sheriff’s crime lab. The 4 p.m. slaying at the bustling corner of College Street, a well-traveled crossroads between the Mercer campus and downtown, was the city’s first this year. Details of the shooting were not immediately clear, but authorities said the episode was recorded by security cameras at the Flash Foods where it happened. Davis said the other person who was shot arrived at the scene riding in the Sentra, with the shooter at the wheel. When the Sentra parked, the man stepped out and circled behind the Monte Carlo. Then the gunman, who had walked over to talk to Bryan, opened fire, killing him, Davis said.  The man who’d been riding with the gunman, standing near the back of the Monte Carlo, was in the line of fire and was possibly shot by his partner in crime, the sheriff said. Investigators said the wounded man, whose name was not made public as of late Tuesday, was shot in his chest or neck. He was taken to a nearby hospital. The gunman drove off. “It shows a disregard for who may be around,” Davis said. “This is a sad situation.” He said investigators had “some good leads” on who the gunman might be. Authorities didn’t say what might have prompted the shooting. Cars streaming in from Vineville and from Interstate 75 a few blocks to the west were detoured briefly as more than a dozen sheriff’s cars clogged Forsyth Street. A man who lives nearby, Gary Ames, said he and others in the area recently started a Neighborhood Watch group. Their first meeting was Monday. “This is not a place to be at 2 o’clock in the morning,” said Ames, 47, “but at 4 in the afternoon you ought to be able to walk over here and get a Snickers bar.” Light rain set in as investigators pored over the car that Bryan was in. The sheriff said they found a pistol behind the convenience store. “To do this in broad, open daylight, right here where hundreds of people are coming by,” Davis said, “it shows just a callousness.”

In an ESPN article Mercer coach Bob Hoffman said: “Jibri Bryan was a special young man who was a great contributor to our team and did everything that was asked of him. He was important to us in every way. I loved him and cared about him from the very first time he was on our campus. We grew to be very close over the years. Our thoughts and prayers are with his special family.”

Bryan’s minutes were down this year after an injury but had a solid season last year (7.8 points per game, 4.5 rebounds per game) and played four minutes in that NCAA tournament win over Duke in 2014. Upon reading his bio , I learned he was an accounting major and management minor , with one older brother, and an honor role student in high school in Savannah, Georgia. In December he was named one of 257 nominees for the 2016 Good Works Team award. The award is for “a select group of student-athletes who have shown dedication to service in their communities.”

His high school assistant coach commented, “He was a total class act. Everywhere on the floor, off the floor, in life, he was what every father would want his son to be,” said Doug Willett, the current Benedictine head boys basketball coach who was an assistant coach when Jibri Bryan played for the Cadets. “I know at Mercer he dealt with some knee (injury) issues for two years but he stayed positive and he stayed close to Jesus. The times I talked to him about it, he was real positive, and kept working. That’s the way he was with everything — a hard worker, a great kid. It was a privilege to know him in his life.”

Another awful story and a real shame to lose an athlete in a horrific tragedy. My thoughts and prayers are with his family, his teammates and his school.

“Fairness doesn’t govern life and death; if it did no good person would ever die young.” – Mitch Albom

Donations to The Coalition to Stop Gun Violence can be made here.