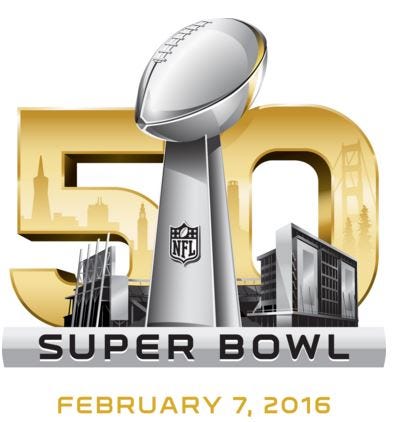 The Super Bowl is upon us, and with that comes a boatload of trends and odds via my friends at OddsShark.com

– The underdog has won SU and ATS in the last four Super Bowls and covered 12 of the last 15.

– The team leading at half has won 36 times and lost only 10 times.

– The team leading in the 1st quarter has won 26 times and lost 11 times (the score has been tied 12 times at the end of the first).

– The team leading at the end of the third has won 39 times and lost only 9 times.

- In an election year the NFC has won 6 of the last 7 Super Bowls. The only NFC team to lose in that scenario was the Panthers to the Patriots in 2004

- Regarding Super Bowl boxes. I usually know I’m dead in the water the minute I get my numbers as I seem to have 8-2, 9-5, or some combination of each pair nearly every year. For those of you who do have better luck than me and get good numbers, I had my guys (and girl) at OddsShark.com run some numbers on the stats over the history of the Super Bowl.

As I’m sure you know, Halftime pays more in almost all pools. For that I bring out the visual. Here you go 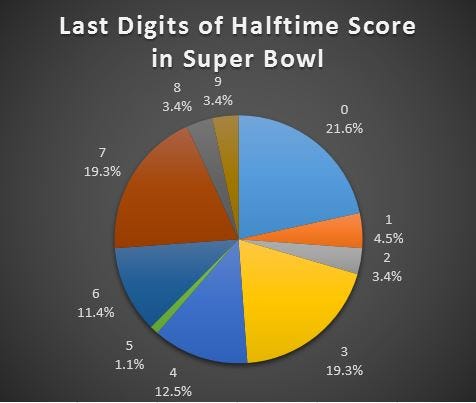 The biggest payout is the final score, and OddsShark.com has broken that history by AFC last digit, NFC last digit, as well as the total % for each number overall: 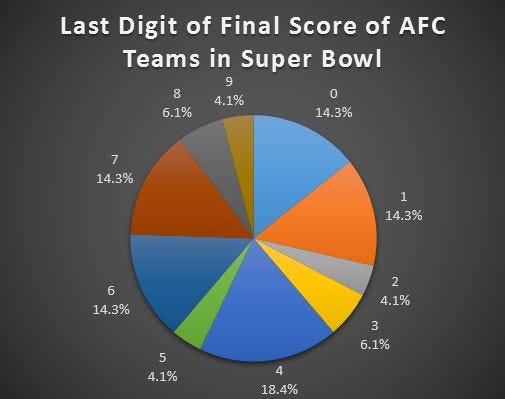 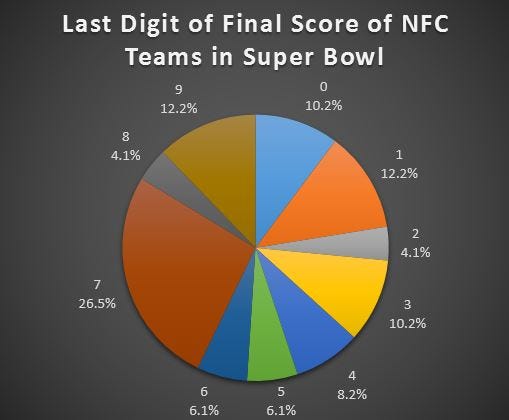 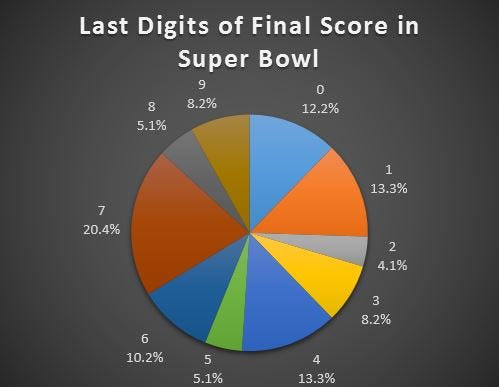 Welcome back to Bosco’s Bets. Big weekend ahead obviously headlined by the Super Bowl. First let’s cover the rest of the board.

- The NBA has 10 games tipping off, full odds here

- Fun Fact : According to the American Gaming Association, $4.2 Billion will be wagered on the Super Bowl

Without a doubt every year you’ll be at a Super Bowl party, and be approached by some nerdy awkward guy who brings up “You know you can bet on pretty much anything today right ?” To which point someone else , who’s likely sweating out WR X’s total catches or how many times someone will be shown on TV, will just glare at them. One of my favorite traditions every year. Love the diversity of the guys who just want to fit in and the degenerate gambler having to coexist in the same environment. Like an episode of Survivor.

I’ll admit I’m not a huge prop guy, but I approach it trying to find the ones I see as most likely to occur, as well as some value props.

Most likely to occur :

I happen to know for a fact The NBA mandates 1 minute 20 seconds for all regular season games. When I say mandates I mean someone in the events department stands during rehearsal and says “great job, but need you to cut it down” . Lady Gaga is “a 730 girl” as my boy Alvin would call her, but even this nutbag can’t stretch the anthem out 23 seconds longer than the average.

Everyone is talking about a defensive battle, and that may be the case. So even odds on something that caters to that type of game is something I love.

Aside from Week 17 (when they won 38-0 and rested starters), Stewart has hit this prop 10 straight games he has played in including playoffs and is 11-4 on the  year. Thanks.

Again… if everyone’s saying it’s a defensive game why wouldn’t teams get stuffed around the 10-20 yard line and take the points ?  Fun Fact via OddsShark.com  – A field goal has been the first score in 45% of Superbowls.

More of the same with the defensive game mindset.

Gives you outs on a sneak down by the goal line, or a miraculous scramble under pressure.

Hate to beat a dead horse but if field position is the name of the game, I’ll take the value of a 52 yarder coming up short as teams just try to get the points on the board.

My man Chris Martin and the boys caught a lot of crap this year when it was announced they would be the performer. I happen to think their pretty good, but I realize some of America will disagree- which is why I see them playing it safe with the first song of the set and going with a well known hit.

Oddly enough, Canisius last home win was 12/19 against BU. Iona is amidst a battle with Monmouth for the top seed in the MAAC tournament. They have a monster game against Siena next weekend, but this weekend face lowly Canisius and Niagara on the road. I think head coach Tim Cluess has this team focused enough that they will not be looking ahead to Siena, and I like them having no games since Monday. Expect the Gaels to come out hungry, as AJ English (22.3 ppg) wills them to victory.

Last week you met East Bar Greg Pinto as one of my hockey guys. This week I bring in 3rd Line Danny who I met years back working an overnight shift. I tried to listen to music or the Knicks, but he wouldn’t shut off WFAN until he got his hockey scores. Again this was years before smart phones. I reconnected with him recently who told me he’s been on fire. Gave me a tip tonight that Malkin of Pittsburgh is out  ,and that Tampa Bay has won their last 7 at home. Pizza on me as usual per our agreement once it hits Dan !

Back to the well with our boy Spread Investor. He’s 10-3 ATS in January as well as 3-0 ATS when featured in this column. Lifetime Super Bowl record of 8-2 ATS. Here’s what he’s got :

“Rating this a a 10 unit play (my system’s highest) for a bunch of reasons but among the biggest are:

-Complete disrespect of Denver’s defense: Nobody gave the Broncos a chance last week versus New England. Tom Brady and Bill Belichick were supposed to destroy Peyton Manning and then win their second Super Bowl in a row. That clearly didn’t happen and nobody’s talking about how Denver’s defense completely broke New England’s offense to pieces that game. Bettors would have taken New England -6 in that game if the spread was that high and the Broncos won the game outright.

-Denver thriving in the underdog role : Denver is 4-0 ATS this season as underdogs. “We feed off the underdog role. It sounds clichéd but I feel like every time challengers knock on the door or the media says what we can’t do, we always answer the challenge. I’m eager to get to Sunday.” – TJ Ward

-Peyton Manning’s underrated efficiency since he’s been healthy: Everyone’s saying Manning is going to get destroyed by Carolina’s defense but nobody is talking about how he fooled New England’s defense multiple times last week for 2 touchdowns and his mobility in the pocket is significantly better now that his foot is healthy. The difference between this season’s Broncos team and any other Peyton Manning team is that Manning’s defense can win this game and doesn’t need 3 or 4 TDs from Manning. He has 0 INTS in the playoffs and his deep passes looked good last week. Carolina plays a lot of zone defense, which plays into Manning’s hands. ”

Thanks as always to Spread Investor for his input. Feel free to contact him about his play on the Over/Under.

NEXT WEEK : Sports Cheetah , @sportscheetah , will be our guest for some NBA all star weekend props.

Enjoy the game, best of luck to the Rico Riders on all your bets. Have a great time at the game Hank, Caleb and the rest of the “fam”.

CFB YTD: +31.15 units College Football 2015-2016 Season, 64-44-3 YTD College Basketball via Twitter . For all stats and trends check out OddsShark.com & follow @Rico_Bosco on twitter for all my other picks, questions, and overall entertainment.