Rico Bosco’s “Bosco’s Bets” is brought to you by OddsShark.com ; the place for trends, stats, articles, and info regarding all things wagers. Before you walk to the ticket window, make sure you read the variety of info available via OddsShark.com.

– Spain’s quest for a 3 peat as European Champions continues against Turkey tomorrow at 3pm. As Andrew Avery tells us : “Spain has a hefty -240 price tag in moneyline markets at online shop Bovada while Turkey is +750 and the draw is +355. In spread betting, Spain is a 1.5-goal favorite currently priced at +120 while the other side is -150. As far as the total is concerned, OVER 2.5 goals is presently Even odds while UNDER 2.5 goals is -120.” Read his full column here.

Joe Osborne and Justin Hartling have their takes below.

– The World Cup of …. HOCKEY !?! Yes that’s right. Rosters have been finalized for the 2016 World Cup of Hockey and Canada has been pegged as the early favorite. How ever you may feel about the NHL sanctioned tournament, there are definitely some interesting story lines, including the North American team, who opened with better odds to win than the Jagr-less Czechs. Futures odds below, and a full preview here. 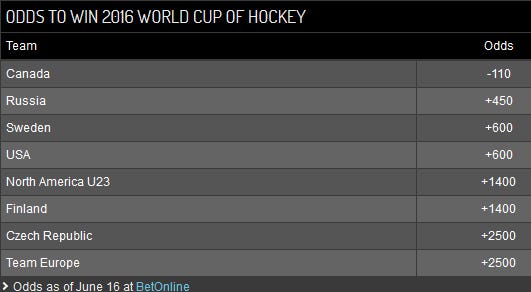 Another winner last week, despite the constant bickering from the comment section.

This week we’re going to the bullpen to bring in a “friend of the program”, my man @SamSays09. As many of you know we’ve taking a liking to each other throughout the course of the year. Let’s see what he’s got for us tomorrow :

“For those of you who have followed my picks this year, you know we have been big advocates of Red Sox overs. Their offense is on a historic pace and their lineup basically goes nine deep…except for Vazquez, who only shows up against the Yankees and provides mostly defensive gifts.

Boston has amassed 79 more runs this season than the next closest club…79!  They lead the majors against right handed pitching at .294, with the next closest team batting .275. They do most of their damage at home, hitting .301 overall at Fenway.

Roenis Elias is being called up to spot start for Joe Kelly, who was sent down after a few disastrous appearances.   Although Elias had a reasonable 3.54 ERA in the minors, his command was all over the place, allowing 27 walks and 61 hits in 61 innings, for a 1.41 WHIP. That won’t cut it against most major league lineups. He has a respectable 4.01 ERA in his brief MLB career, but a high 1.31 WHIP, as command issues continue to plague him.  Note that Seattle is 8th in the majors in OBP, which should play a factor in to tonight’s game.

Iwakuma, on the other hand, has actually pitched decent on the road this year with a 3.20 ERA in 7 starts, but has given up at least 3 ER in 6 of 7 overall starts.  Those are quality outings, as he has reached 6 innings in 5 of those of those matchups, but visiting Fenway on a Friday night will be a different monster.

We are going over the posted total of 9.5. Best of luck.

P.S. One more important trend to keep in mind: Overs are 5-0 in games I’ve attended this season and it so happens I will be in attendance tonight…”

Big thanks to Sam for his work, make sure you give him a follow.

– Make sure you tell your dad’s Happy Father’s Day.

CFB YTD: +31.15 units College Football 2015-2016 Season, 183-152-7 (+15.8 units) Regular season College Basketball via Twitter, +7.7 units in the NCAA Tournament. For all stats and trends check out OddsShark.com & follow @Rico_Bosco on twitter for all my other picks, NCAA Tournament analysis , birthday wishes to Mike Francesa, questions, how engaged life has changed me, all things floral hats, admiration of D’Jais, and overall entertainment