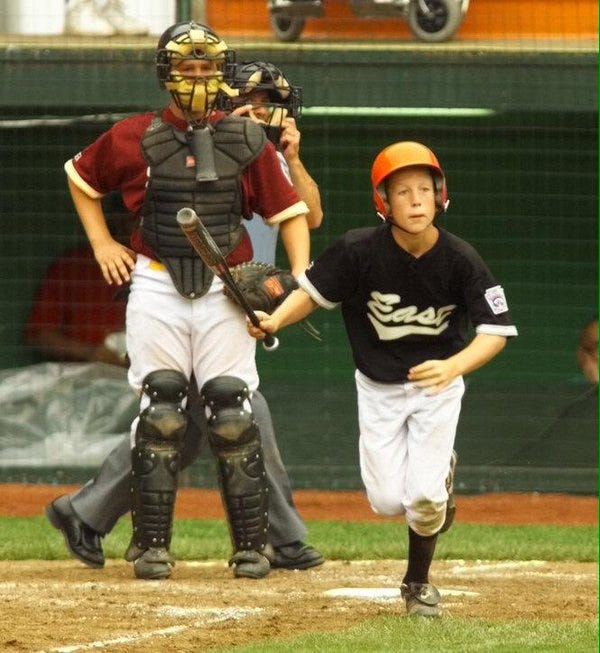 I could write an entire blog on why, however I will just write about my pool idea, so here it goes :

The Little League World Series is one of the last true amateur sports ever, despite the constant attempts to try and corrupt it (looking at you Jackie Robinson LL of Chicago, and you Danny Almonte), the LLWS is pure to it’s core. It’s got all the raw emotions of sports built in with the unpredictability of kids.

There’s a line in one of my favorite films, Friday Night Lights, when Gary Gaines says “Forever is about to happen here in just a few moments.” I left school early to go see that movie the day before a game my senior year of high school football and I didn’t truly appreciate that line until after my college playing days were over. For some guys, high school is as big as it gets, for others Little League may be the last meaningful game they play whether they know it or not. The biggest kid at 12 could be the smallest kid at 15. The crafty pitcher at 11 may never develop the curve ball he needs for high school. The kids may not know it, or fully even believe it, but the truth is the window of meaningful sports is beginning it’s close. For some it gradually goes down, for the one in a million like Todd Frazier it stays open until he decides to shut it, but for the majority – it violently shuts. There may never be as a big a moment as the one they are in right then.

With all that said about the allure of do or die sporting sporting events , the true romance of the LLWS is that it involves absolutely unpredictably crazy kids in a major sporting event. Let’s face it , do-or die formats are a dime a dozen.. NCAA Tournament, NFL Playoffs, the Olympics, etc. The reason we watch the LLWS is that in a do or die format you could have a wacky play determine the game at any second. Swinging at a 3-0 pitch above your head but chopping it past the 3rd baseman for a go ahead single… Sure ! Base running errors that you know the coaches told them not to do 34701 times in practice … Of course ! It’s fantastic, it really is. Every kid in the lineup gets in the game and has a chance to make a meaningful play. And I 100% don’t mean that in a “everyone should get a trophy ” way. but I mean where else in sports is each player guaranteed to be involved in a meaningful aspect of the game ? Exactly. Every August I look forward to watching as much as I can.

Which got me to thinking, there’s gotta be a way to create a pool for this so I did. Because 1 I love pools and 2 I love the LLWS.

– In the 72 entrants pool each entrant: gets 1 US player and 1 foreign player.

– In the 36 entrants  pool each entrant: gets 2 US players and 2 foreign players

– Have the player who gets EXACTLY 3 hits in 1 game

-ONLY GAMES THAT MATTER COUNT. This means any team who is playing with 1 loss or no losses.

– The tournament is double elimination, which makes this pool fantastic because there’s an element of survivor pool to it as well. Oh you picked the 7 hitter from Canada and the 9 hitter from South East and both their teams went 0-2 right away ? Tough shit… keep paying the $1 a day because you’re out.  Oh you’re kid from Italy belted 3 hits in a meaningless consolation game after striking out 6 times in games that mattered ? Tough shit.. doesn’t count.

– For the full bracket. I suggest printing out this bracket, and crossing off all 4 consolation games

– Each team has 9 batters in the lineup (72 total US batters, 72 Foreign batters)

-Pieces of paper are put in a hat with very simply “Mid Atlantic 1 hitter, SouthEast 7 hitter, Asia-Pacific 9 hitter” until every slot 1-9 is listed for all 16 teams.

-Players are distributed to entrants by picking out of a hat  as listed above (72 player pool picks 1 player from Us 1 from Foreign, 36 entrant pool picks 2 US Players, and 2 foreign players)

– The pool goes on until someone’s player gets EXACTLY 3 hits.

-If two people get it the same day it splits. If someone gets it very early in the pool. Ie- 1st day or 2nd day – the pool can restart – but that’s your call.

– Since games are only 6 innings, it’s suggested that you own the slot (ie 8 hitter for MidWest ) and can win by getting 3 combined hits from any of the players appearing in that slot. So if Joey Toes starts the game and goes 2-2 then gets subbed out in the 4th and Billy Bats comes in and singles in the 6th you win. This is also a way to even it out because the lower the batting order, the more likely the players get subbed. Lastly, because of the re entry rule it’s possible even good players can get taken out for defensive switches

Bonuses to thicken the pot :

Let me know if you have any questions while running it and best of luck.