September is full of mistakes in college football. Most of those mistakes are made by players in the midst of competition, but if you are looking for an example of a coach getting eaten up by the September blues look no further than Hawaii’s LB coach, Sean Duggan:

Last night on “The Nick Rolovich Show,” which I’m sure you tuned into live, the Rainbow Warriors head coach discussed the injury:

SEC Country-During the Rainbow Warriors’ 41-18 win over Western Carolina last Saturday, there were points when Duggan was understandably quite excited about what was transpiring on the field. But at one point, when Hawaii blocked a punt, Duggan may have taken it just one step too far.

He tried to chest bump defensive lineman Viane Moala, who is listed at 6-foot-7, 270 pounds.

“I’ve never seen anything like it,” said Rolovich, Hawaii’s head coach, per Hawaii News Now. “You advise against chest-bumping a 6-foot-7, 300lb. Tongan. That’s just — as a new haole guy on the island, that’s just not something you should make a habit,”

Here is a picture of Moala: 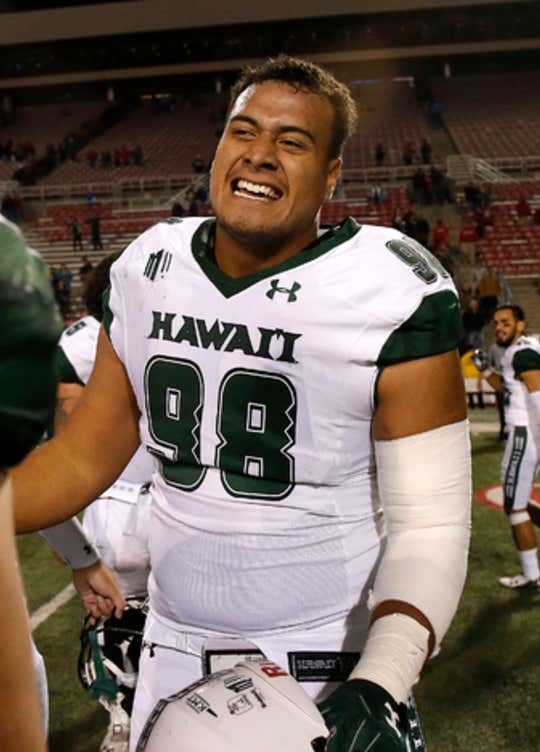 Yeah, you shouldn’t be chest bumping a monster like that or you’ll end up flying through the air like this:

I have to respect Coach Duggan going all out for this celebration, though. Who cares if you are playing Western Carolina who was FCS in a conference you’ve never heard of? CHEST BUMPS FOR ALL.

Also, if you were looking for Duggan after realizing he had a serious injury, I hope you checked the sideline:

He apparently had to have surgery yesterday, but will not be missing any action as the Rainbow Warriors try to shock the UCLA Bruins this weekend:

CBS Sports-According to Hawaii News Now, Duggan will be with the team during Saturday’s game against UCLA at the Rose Bowl — sling and all.

Duggan is shooting up #FootballGuy power rankings EVERYWHERE for this all-around performance. He’ll have to continue similar antics if he wants to be the biggest football guy on his team, though. Being ranked above a guy who took away his own team’s bench to send a message is going to be a tough task: