ESPN-Woods and Myers, who have been a couple since 2014 and welcomed a son, Benjamin, into the world four months ago, were tired of waiting. During the day, Woods learned that offensive line coach Brian Hamilton was an ordained minister and asked him if he would be willing to conduct a ceremony.

“Sure, why not,” Hamilton said.

“Sure, why not” is definitely the mindset I want the person who is marrying me to have. Not that this is a day I’ll remember forever or anything like that.

The Woods’ marriage could be the leader in the club house for #FootballGuy story of the 2017 college football season. The more I ponder this, the more I am in awe of Mr. Woods. This is an evolution in the #FootballGuy world that I nor anybody else could’ve seen see coming. I’ve heard plenty of players and coaches romanticizing about “dying on the field,” but not once have I stumbled upon marriage taking place on the tundra talk. My high school football coach once told my team that he hadn’t seen his 6-week old baby yet because he was too focused on our season (he missed the birth for one of our games), but not even he discussed married on a football field.

So Woods called Myers and told her the good news: He found someone who could marry them. They didn’t have to make the one-hour drive to the courthouse and could have a ceremony in front of their friends.

This is the biggest lie ever. How on earth could this girl be in? I don’t know a lot about females, but I will tell you one thing I do know: they are obsessed with getting married/having a wedding. Weddings are one of the biggest businesses in this country for a reason. Say Yes To The Dress has been on the air for a decade for a reason. Maybe Mrs. Woods is the outlier of all outliers, but I can’t think of one woman on this earth who has dreamed of getting married on an FCS football field, in the rain, after her fiancee just finished a random Tuesday practice while the rest of the team looks on, all ordained by an offensive line coach. 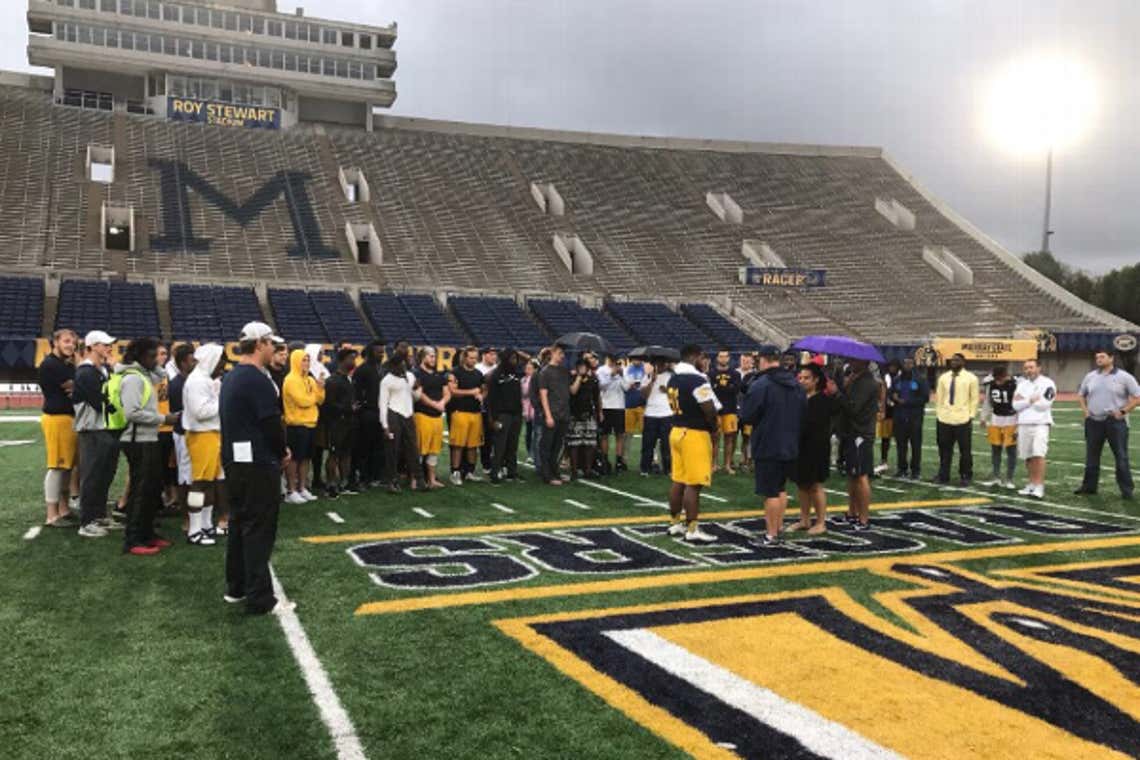 They rehearsed before practice and when it was over, they had a wedding.

“We kind of made it up on the fly,” Woods said. “Coach Ham is one of my favorite coaches. He’s been teaching me a lot of about fatherhood and other things.”

It was an unexpected honor for Hamilton, who was thrilled to play a role in the couple’s special moment.

“Life of being a college football coach,” Hamilton said. “You get to be a part of kids’ lives. It was fantastic for me to share that with them.”

Their families weren’t there, but Woods, who is from Atlanta, said when he called his mom to tell her, she couldn’t stop crying.

I completely forgot about the family aspect. I think my mother would die on command if I called her and told her I got married without her in attendance.

The two of them, I assume, have been together since 2014 when their child was born, so I guess that makes this move make a little bit more sense, but not having your mom in attendance? Jimbo move.

P.S. Having your wedding in the rain has got to be a bad omen.