Kent State turned the ball over on downs twice, threw an interception, missed a field goal, and scored zero points on four trips inside Marshall’s 30-yard-line. They were still only down 7-0 with 7 minutes left in the fourth quarter.

Marshall still ended up scoring 2 touchdowns in those last 7 minutes, including a 29-yard TD run with 1:08 left on the clock. Brutal for anybody backing Kent State +14.5.

Iowa, who had already fumbled in the red zone earlier in the game, was up 31-14 with 1:47 left in the fourth quarter. North Texas had the ball. Iowa -20 bettors were pretty much hopeless until North Texas threw an interception that Joshua Jackson returned to the Mean Green 28.

That interception turned out to lead to anyone with Iowa -20 being blue-balled:

Toren Young was SIX FEET from a cover for Iowa backers. The next two plays for Iowa looked like this: 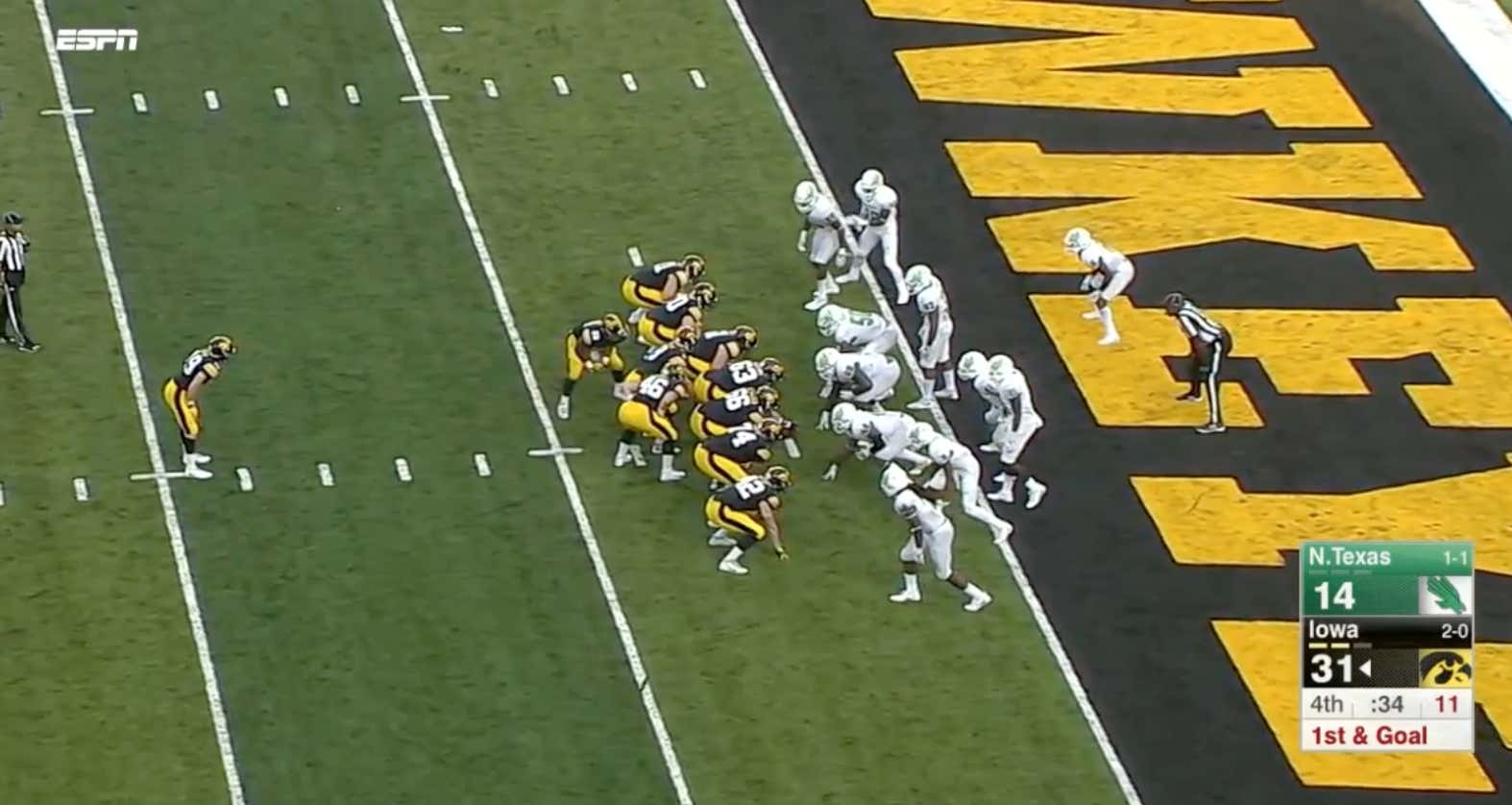 It was 21-14 Louisiana-Lafayette at the half and ULL backers were walking with a pep in their step. Even with Texas A&M leading 31-21 with 0:43 left in the 3rd quarter, Ragin’ Cajuns backers were lining up to cash their tickets. Then this happened:

ULL backers hearts started to pound a bit harder. The heart rates dropped as the Cajuns drove down to the Aggies 29 with 7:35 left in the fourth. All that was needed was a field goal to secure the cover. That didn’t happen:

Then before you knew it, the moose came, took, and ate ULL backers +23.5 tickets.

After falling behind early, TCU took a 56-29 lead with 8:35 left in the fourth. TCU backers were feeling good. SMU had only scored 7 points in the second half and a cover was in sight. Not for long:

SMU’s TD was with 7 minutes left in the fourth, so TCU backers kept hope. The recovered onside kick in SMU’s territory increased said hope. That hope was all for nothing:

A first down called back for holding and a 3rd down pass completed feet from a first down….brutal.

But, again, it was all for nothing!

24 feet and one point from a cover.

Even Nick Wright took a few minutes off from coming up with bogus arguments about LeBron James being better than Michael Jordan to appreciate this MOOSE:

At halftime, Oregon and Wyoming combined for 52 points. At that point, anyone who bet the over turned off the game. All the Ducks and Cowboys had to do was score 13 more combined points. The over was a lock….right? WRONG! 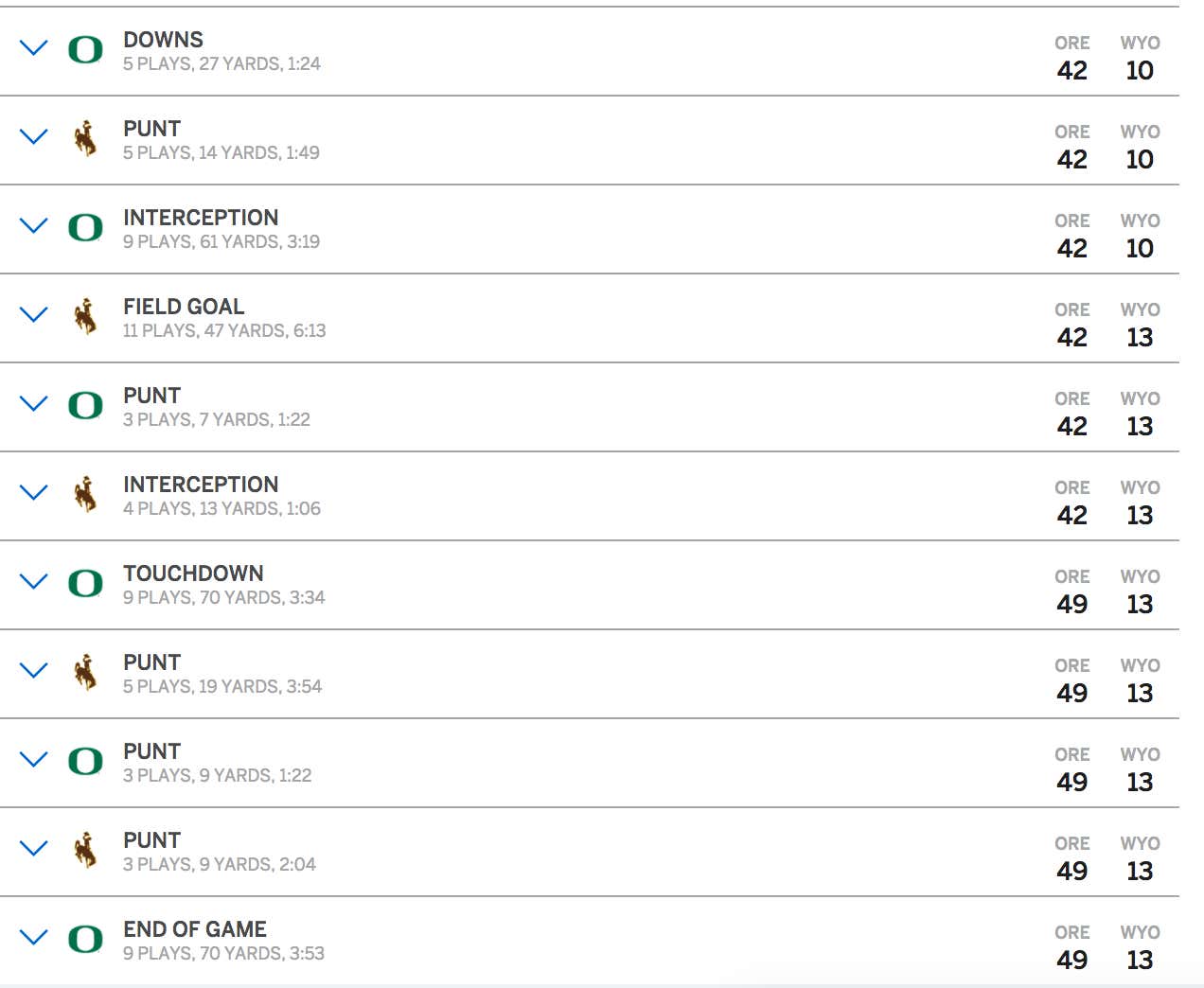 That’s a combined 347 yards, but only 10 points for the two teams in the second half. To top that all off, Oregon ran out the clock in the red zone for one final tease after a 70-yard drive. MOOSE.

Andrew Ford found Nick Orekoya for a touchdown with 2:29 left in the first to put UMass up 7-3. Temple responded with a TD one minute and twenty-five seconds later. Those who had UMass +8.5 for the 1st half were still feeling great. All UMass had to do was run out the remaining 58 seconds and go into the half only down 3 points. Surprise, UMass didn’t do that!

Look at that bouncing ball!!! There’s a metaphor here somewhere.

UMass backers still had some hope. A few stops and Temple would kick the field goal and they would still hit their +8.5 bet.

You know how this ends:

The second half score was 17-10 Ohio with 2:13 left in the fourth. Kansas started their final drive on their own 25. One third down conversion and another fourth down conversion later, the Jayhawks had the ball at Ohio’s 2-yard line with 2 seconds left:

1:53 later, after an 8 play, 75-yard touchdown drive, Cincinnati converted a 2-point conversion to put them down 3. All those who backed Miami (OH) were disappointed, but things could be worse. There wasn’t much time left in the game and they would most likely escape with a push. That didn’t happen:

To make matters worse, Miami (OH) drove down to Cincinnati’s 20, but eventually turned the ball over on downs:

He didn’t even get off a pass!

You all knew it was coming. Anytime there is a hail mary that results in a blown cover my heart sinks.

I had Florida -4.5, but couldn’t even enjoy the last second cover because of all the times I’ve been on the other side.

I thought it was necessary to include Florida -6.5 in this spot considering the late line movement. Take a second and imagine having Florida -6.5. You could argue that is a worse bad beat than Tennessee +4.5.

The excitement of seeing the hail mary completed only to realize it didn’t matter because the PAT would never be attempted. BRUTAL.

Until next week, continue to fight off every MOOSE in sight!