(The odds listed below may be different from the odds you saw at your personal sportsbook. All bad beats did exist at one point at a major sportsbook in Vegas and/or online throughout the last week. I typically find line movement history at Covers.)

Hawaii outgained Wyoming 450 yards to 269, had 11 more first downs, and held the ball for 18 minutes more than the Cowboys. Thanks to a kick return TD, two turnovers and almost 100 yards in penalties the game somehow ended up in overtime.

Wyoming scored a TD on the first play of overtime to make the score 28-21, but Hawaii had a chance to respond. On their first play from scrimmage, they ran the ball down to Wyoming’s 15-yard line then this happened:

What a gut-wrenching way to end your day if you had Hawaii +6.

After a 15 play, 71-yard touchdown drive, the scoreboard read Army 17, Tulane 14. There was 5:32 left in the game, and anybody with an Army +3 ticket was feeling confident. In the next 5 minutes of game time, Tulane converted 2 third downs and another pair of fourth downs. The clock read 0:47 after Army held Tulane on third down at their own 6-yard line. Most coaches would go ahead and kick the field goal to take the game to overtime, but not Willie Fritz. For the third time on the drive, Tulane went for it and converted on fourth down. The next play, this happened:

19 plays and 75 yards of a knife stabbing you right in your gambling heart was tough for all Army +6 backers.

Let’s look at all the incredible lapses in basic football it took for Arizona to not cover this game.

You couldn’t have made the second half up if you wanted to and Arizona still came within a few points of covering. Bad Beat City, Arizona.

It was 2nd & 7 for Clemson from the 50-yard line with 6 minutes left in the fourth. Up to this point, BC and Clemson had each scored 7 points in the second half, so anyone who took the BC Eagles in the second half was about ready to count their winnings.

Then Travis Etienne made the BC Eagles supporters heart rate raise a little:

Boston College then went three and out. Five plays later, Clemson put another TD on the board:

The clock read 2:50 when the Eagles received the ensuing kick-off. Boston College +14.5 in the second half was looking much worse than it was just a few minutes earlier, but was most likely going to cash, right? Wrong! It started with this garbage time interception:

Which was followed up with a TD a minute and a half later to ruin the night of all those who bet BC +14.5….sad!

Before a WMU fumble with 14 minutes to go in the fourth, Wagner had four drives for a combined 14 plays, 4 yards, 3 punts, and a fumble. Western Michigan was up 42 and Wagner showed no signs of getting another first down, let alone a touchdown.

And Wagner, the kings of Staten Island, found a way to get into the end zone:

Western Michigan ended up having two more possessions after this TD, both of which ended in Wagner territory and with zero points on the board.

Going into the half, the score between the Chippewas and Red Hawks was 28-14. If you had the over, all you needed was 10 more points in the second half. The over was the lock of the century….until it wasn’t: 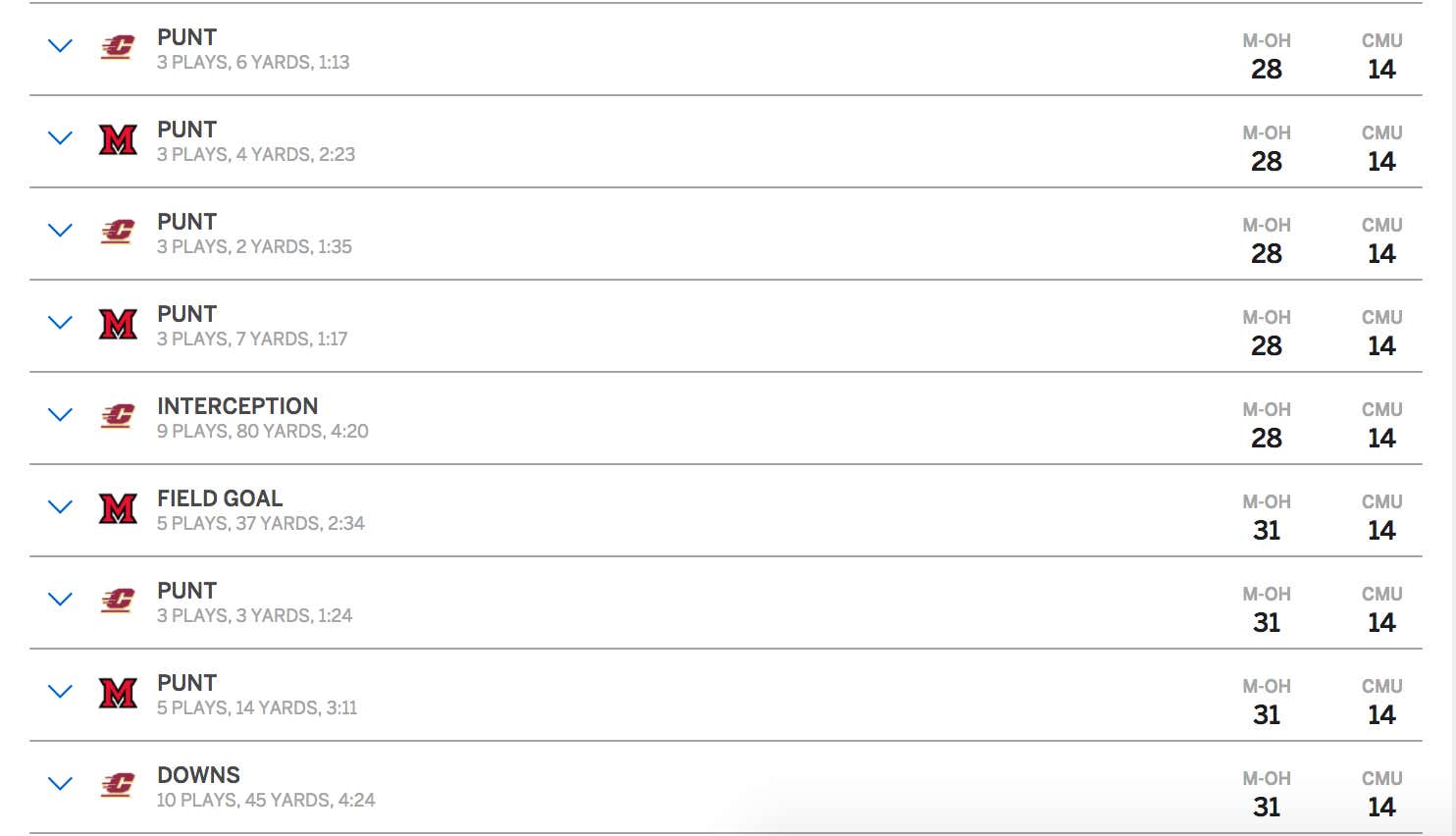 Central Michigan was inside Miami’s 5-yard line on two separate drives in the second half and scored a grand total of ZERO POINTS. I THOUGHT THIS WAS SUPPOSED TO BE #MACTION! Tough pill to swallow for anyone on the over.

The score was 27-24 in upstate NY, Buffalo had the lead. FAU began a drive on their own 9-yard line with 4:13 left. After a run play was called on 4th & 3 just seconds later, FAU turned the ball over on downs to Buffalo, who scored a TD 3 plays later. Anyone with the under 59 was starting to sweat a bit more.

After the kickoff, FAU started a meaningless drive on their own 25. Before you knew it, FAU was on Buffalo’s 24 with 1:50 to go and ready to rip under bettors hearts out:

I watched the “catch” from the FAU player about 10 times now and still don’t know how anybody on this earth could rule that a catch without a review. The receiver didn’t even take a full step with full possession of the ball! YA GOTTA REVIEW THAT!

Let’s take a look at the emotional swings the West Virginia bettor had on Saturday:

After only having an eight-point lead with seven minutes to go in the ball game, the Mountaineers had a chance to cover the 24 point spread after the second straight turnover by the Jayhawks. This is what that possession looked like:

Here is the play that WVU ran instead of taking an easy field goal to secure the cover:

Oh no, Will, baby, what is you doing? MOOOOOOOSSSSEEEEE!

If you are reading this blog with a child, please don’t let them watch this play….they will be cursed forever.

Sometimes you just aren’t meant to win a bet…..if you bet Louisville -42, God was sending you that message.

There was a combined 34 points scored between WKU and Ball State through the first 53 minutes on Saturday night in Kentucky. Ball State was starting a drive that ended 2:04 later in the end zone to put them up 21-20. After a 3:12 drive, WKU punched the ball in to make the score 26-21 with just 1:38 left in the game. If you had either Ball State +10 or under 50, you were feeling pretttttttyyyyyy good. The only thing you had to avoid was the dreaded pick six and both bets were going to cash.

Can you guess what happened next?

I shed a tear everytime I see an ending like this.