(The odds listed below may be different from the odds you saw at your personal sportsbook. All bad beats did exist at one point at a major sportsbook in Vegas and/or online throughout the last week. I typically find line movement history at Covers.)

Here is how this game ended:

If that wasn’t brutal enough for anyone who had Wake Forest +7 or the Deamon Decans straight at +230, here is an absurd stat: without the 40-yard game winning pass from James Blackmon with 0:53 left in the game, Florida State would’ve had 81 passing yards on the day. Eighty. One.

I wonder what the ATS stats are on a home dog that wins the turnover battle, has 5 sacks, outgains the other team by 100 yards, and allows under 100 passing yards. Has to be something around 90%, right? At least you pushed.

Louisiana Tech started a drive on their own 10-yard line, down one point, with 14:54 to go in the 4th quarter. Anybody supporting South Alabama plus the points was feeling great. 2 minutes and 34 seconds later the Bulldogs scored a touchdown. 7 minutes and 59 seconds later, LT kicker Jonathan Barnes put the ball through the uprights to make the score Louisiana Tech 27-South Alabama 16.

Next thing you knew South Alabama turned the ball over on downs and Louisiana Tech handed the ball off to Boston Scott:

Oklahoma State ended up leaving Lubbock with a 41-34 win. Overall, this was a good win for the Okies, but as the saying goes, good teams win, great teams cover.

How did Oklahoma State end up only winning by 7 in a game they had 200 more yards than the Red Raiders? Funny you should ask:

That is two under 20-yard field goals off the post and a 96-yard interception return for a touchdown or, put more simply: 13 points. Those who had OSU -10 only needed 4 of them!

When California’s Matt Anderson’s 36-yard field goal flew between the goal posts with 10:44 left in the fourth, California was down 24-17. Under backers were feeling phenomenal along with anybody who had a California +17 ticket. Oregon went all 2011 and scored three plays later, then after a sack and a penalty it was 3rd & 19 for California:

California did respond to give anyone who bet Cal +17 hope…

Oregon went three and out on the following drive. Every person on Cal &/or the under were feeling pretty, pretty, prettttyyyy good! That was until Cal turned the ball over after four plays and Oregon, who could’ve just ran the clock out, stabbed every under & Cal backer in the heart:

Got to love a freshman rushing for his first division 1 TD celebrating not knowing that he caused a top 10 beat on the weekend. Talk about being selfish.

That’s a 31 point fourth quarter to hit the over. MOOOOSE.

41-14 was the score when Nevada received a kickoff with 2:44 left in the fourth. Two third-down conversions and 70 yards later it was 4th down for Nevada:

And, you guessed it, this was the next play:

Rutgers had driven 60-yards on 13 plays late in the fourth. There was 0:59 on the clock as their kicking team lined up. The score stood 56-0, Ohio State, 21 of which was scored in the second half. Rutgers wanted to maintain the little dignity they had left and leave the field with some points. That didn’t happen:

You couldn’t make it up if you wanted to. Only you, Rutgers, only you.

Earlier in the half, UNLV scored the only points in the second half with a 1-yard TD pass but failed to convert the extra point. For most, the missed extra point was irrelevant in a 28-point game, but for some, it meant the world because there weren’t any more points scored for the rest of the game.

To make matters worse, this is how close they came to scoring another TD:

His knee ended in the end zone, but the ball didn’t. HIS DAMN KNEE! 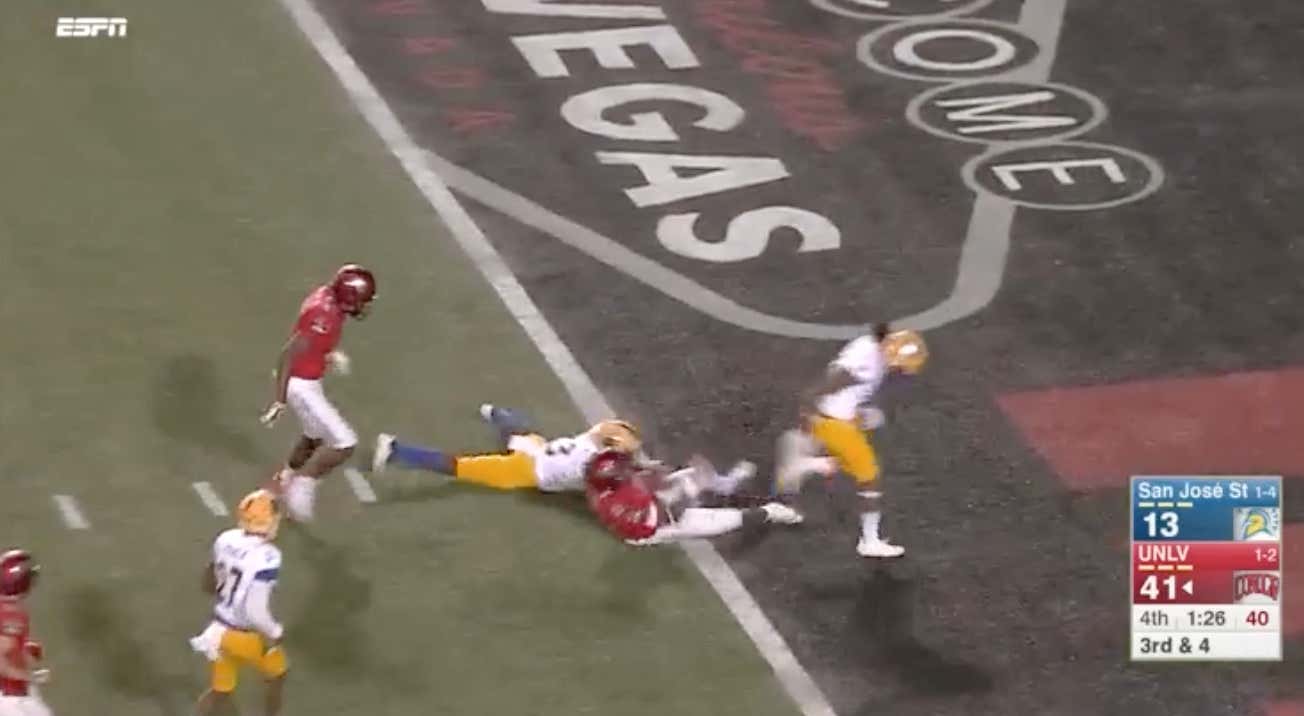 If you were wondering how the next two plays went to end the game, here they are, in picture form: 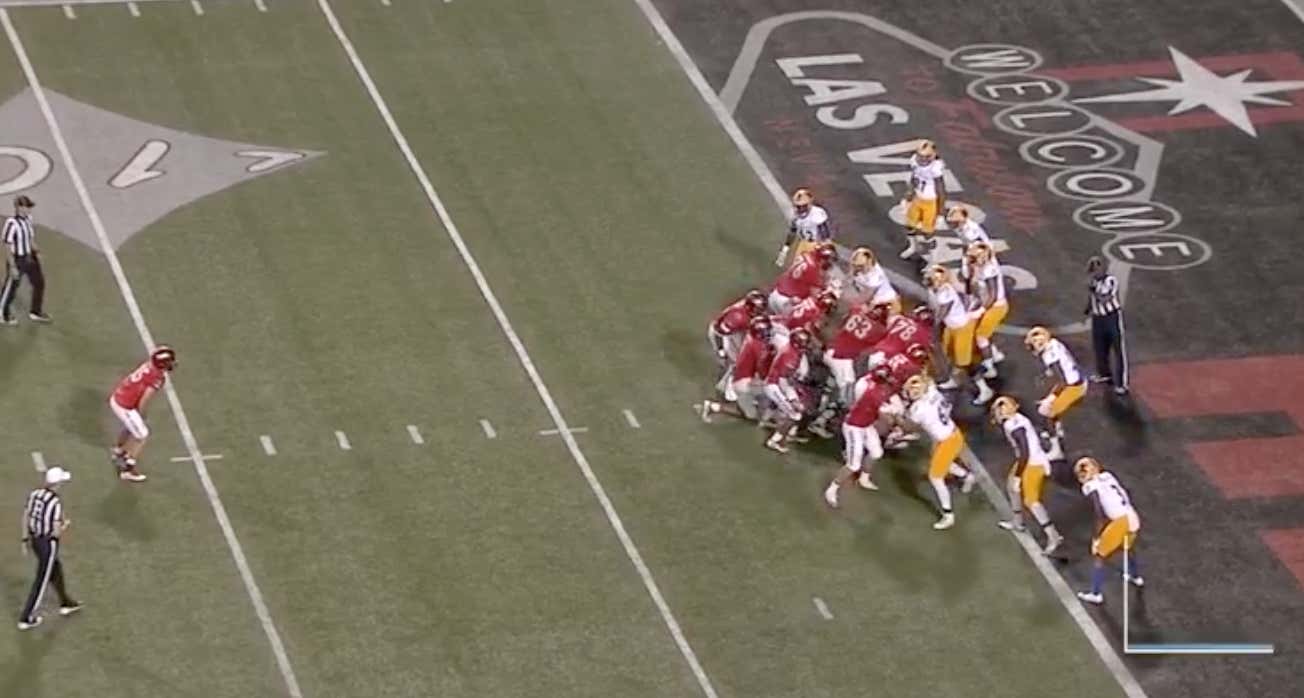 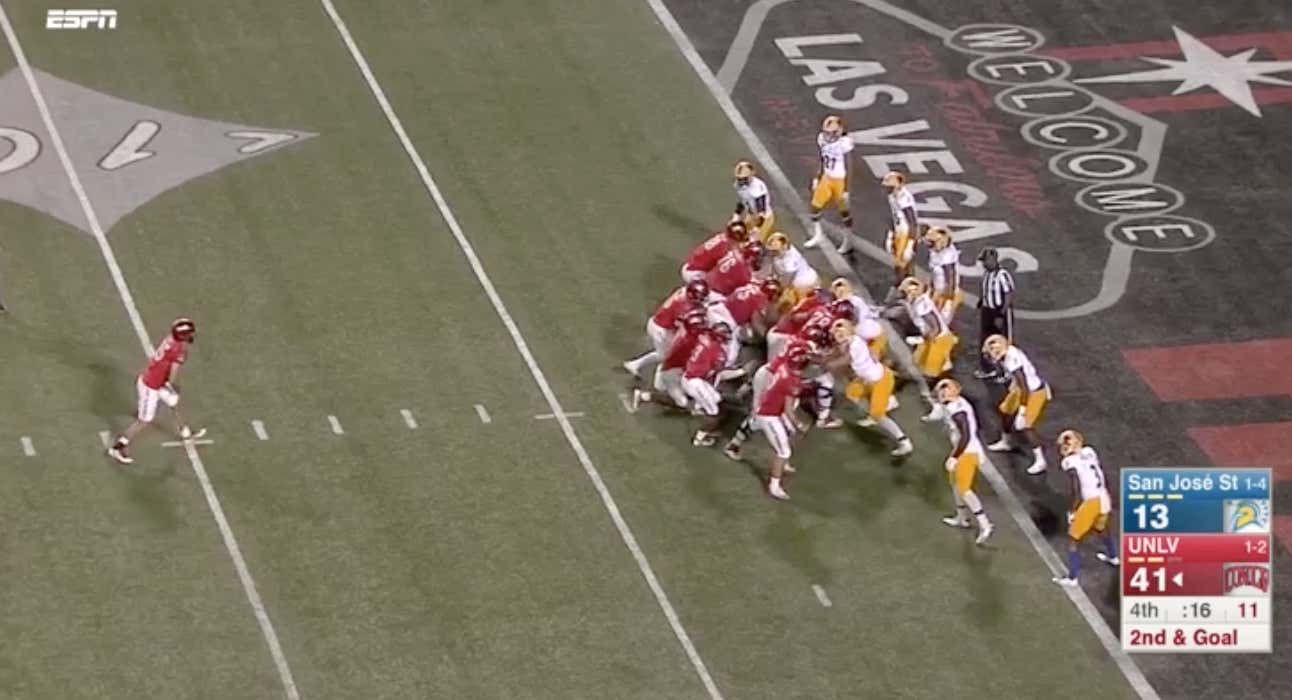 4th & 1. Vanderbilt has zero timeouts. Freshman RB in the backfield.

Thanks, Jim! Now go hump your shark or whatever you do in your free time.

If you had the over in this game all you needed in the fourth quarter was one point. Instead, you ended up getting trolled not one, not two, not three, not four, but FIVE TIMES!

For those counting at home, that is 35 plays, 240 yards (6.86 per play!), and 5 drives ending in opponents territory in the fourth quarter for a grand total of zero points. MOOSE.

The worst bad beat of the season, and it’s not even close:

The ball was under the guys leg….but it still ended in a touchdown. The moose of all mooses. 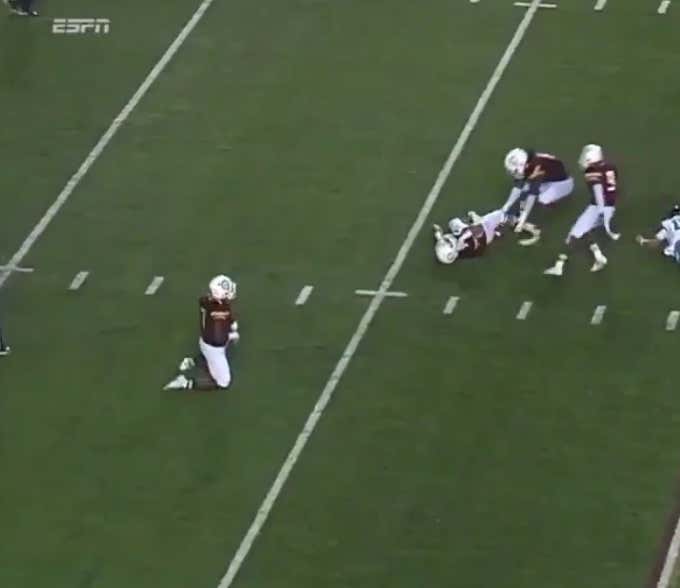 It was cute that the Redskins tried to pull their best Coastal Carolina impression, but similar to Ray J, they hit this moose first: