We all knew Tom Herman was obsessed with hydration after his hydration chart went viral in April:

No person on earth would even consider such a thing if they weren’t a psycho, but it has become apparent that the hydration chart is only the tip of the iceberg of Herman’s OCD-like thoughts on hydration.

The Athletic-The junior defensive back is a favorite of first-year Longhorns coach Tom Herman. He’s called Locke’s parents to thank them for raising such a great kid. Locke is no troublemaker. But he did a bad, almost unforgivable thing one-night last spring.

And Texas’ first-year head coach found it, accidentally left behind in the players’ lounge. He texted a photo to Locke and defensive backs coach Jason Washington.

“I think my text was something like, ‘What is your water bottle doing not in your hand?’ ” Herman told The All-American. “And his response was probably what got me. ‘Hahaha, yeah my bad, I’ve been looking for that.’ So, OK, this kid doesn’t get it.”

Herman called a 4 a.m. meeting the next day to rip into Locke and Washington to their faces. The message, as he explains it: “This is vitally important to what we do around here. If I’m gonna tell you it’s vitally important and you’re not gonna adhere to what’s required of you, that’s called defiance.”

Why isn’t there a mockumentary on Football Guys yet? Is there ever been a guaranteed hit like a show about college football coaches shot just like The Office?

Drink up or pay the price. Any Texas player caught without a water bottle on their person is sentenced to 10 up-downs, right then and there. Skip one of the weigh-ins, Texas strength coach Yancy McKnight said, and that’ll be 20 up-downs.

I’m imagining Texas coaches busting into one of their player’s classes and making them do 10 up-downs in the middle of a lecture and I’m not laughing because of how unbelievable it is to think Texas players go to class.

When players show up to the facility in the morning, they take a brief wellness assessment in an iPad — logging info like sleep time and body soreness — and then fuel up before taking their hydration test. Before and after practice, they step on a scale to record exactly how much water weight they lost. That data is laid out in a packet delivered to McKnight’s desk right after practice.

Any player who sheds 3 percent or more of their body weight gets red-flagged. Getting flagged on back-to-back days means the breakfast program: The staff must watch and document a player eating his breakfast.

I wonder which graduate assistant has to document “bad guy” hydration players eating breakfast. Talk about a come to Jesus moment. Working 18-hours a day for pennies on the dollar all to watch players who don’t drink enough water eat breakfest.

Furthermore: If a player can’t handle the easy stuff like drinking water and passing hydration tests, why would Texas’ coaches trust and depend on them?

“Like I’m gonna put you in the game on fourth and 1 against Oklahoma?” Herman said with a laugh. “Come on! That’s ridiculous!”

Kinda weirded out that Herman likes saying squirt so much, but whatever.

It’s officially been confirmed that Tom Herman is the #1 hydration guy in America right now, somehow passing over Ricky Bobby for the crown.

After reading this, I think it may be time for Barstool to implement similar strategies. After the initial hydration chart came out, this photo was put into one of the bathrooms in the office and there’s been nothing but success since. 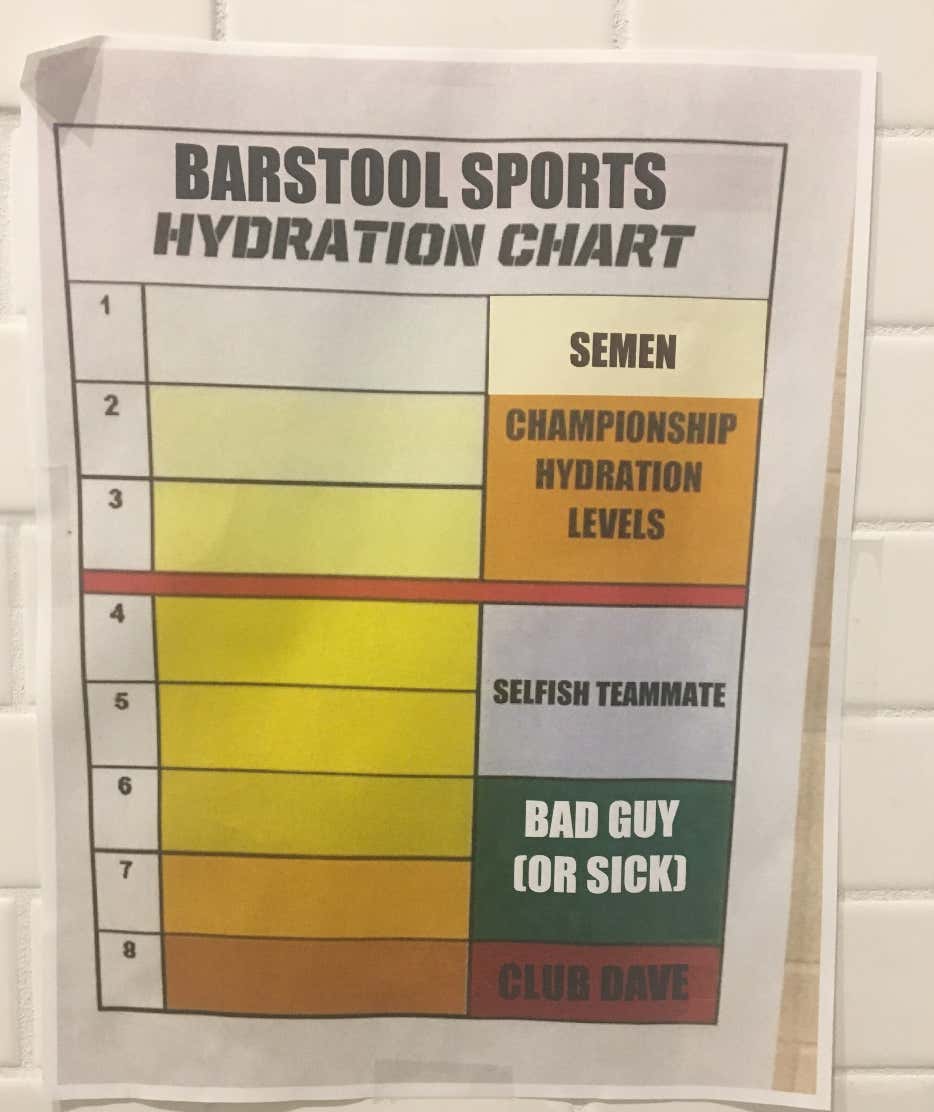