Texas Tech scored a TD to make the score 35-17 with 9:19 left in the third quarter. At that point of the game, they were on pace to score around 50 points. In the history of college football, I am willing to bet an underdog that scored 50 points covered 99.9% of the time. Put simply, anyone who bet TTU was feeling good.

What if I told you, a person who knows nothing about this game, the final amount of points West Virginia scored was 46, what would you say the percentage was that TTU covered? 80%? 90%? Turns out that percentage was a big goose ole egg.

I hate seeing overtime bad beats. They should be illegal. You bet four quarters of football that is played on 100 yards of grass, not the 25 yards of grass CFB overtime occurs on.

Down 3 with 2 seconds left Indiana hit this field goal to tie the game:

On the first play of Michigan’s OT, Karan Higdon went 25-yards for a TD. A few plays later, on fourth and goal from the 2-yard line, Indiana secured the bad beat:

That was until it all got called back.

Down 24, Arkansas started their drive on their own 21 with 1:20 left in the first half. After a 2 yard run, Arkansas had a bit of hope:

Then on 3rd and 9, Arkansas completed a 14-yard pass to put the Razorbacks at Alabama’s 3-yard line with three seconds left. Time to bring out the kicking team, right? BRETT BELIEMA SAYS NOPE!

Alright, this game closed at -37 in most books, but that was due to late line movement on Saturday after it was announced Arkansas QB Austin Allen was not going to play. I played this at 31, I know of people who got it at 29 earlier in the week, so for this column I am considering this game at 31/31.5.

Here’s the situation. Arkansas drove 72-yards to score a 3-yard TD on 4th & goal from Alabama’s 3:

Only to miss the extra point:

I’ve never had an extra point beat like this. I can only imagine what it feels like and the amount of cheap vodka it would take to drown that feeling out.

Up 26-22, UTSA pinned North Texas down at their own two with 1:17 left in the game. One minute later, this happened:

A damn death happened in the middle of the play and they still didn’t cover. A DEATH! THEY MURDERED SOMEONE AND DIDNT COVER!

If I ran the gambling section of the FBI (if that is a thing), this is a game I would stop every investigation I had going on to look at. Watching this game (I had MSU) it looked like the two teams were competing against each other to see who was better at point shaving.

RIP to anyone who had MSU -4 or the under:

Down 13, Cincinnati ran the final play of the first half. The clock read 0:00, but due to an offsides penalty on USF, Cincinnati was allowed to run one untimed play.

Coastal Carolina should change their mascot from the Chanticleers to the Bad Beats. Two weeks after this:

Coastal Carolina returned to the top of the bad beats report this week in Arkansas:

THIS close to an under. Gambling is a cruel, cruel form of entertainment. 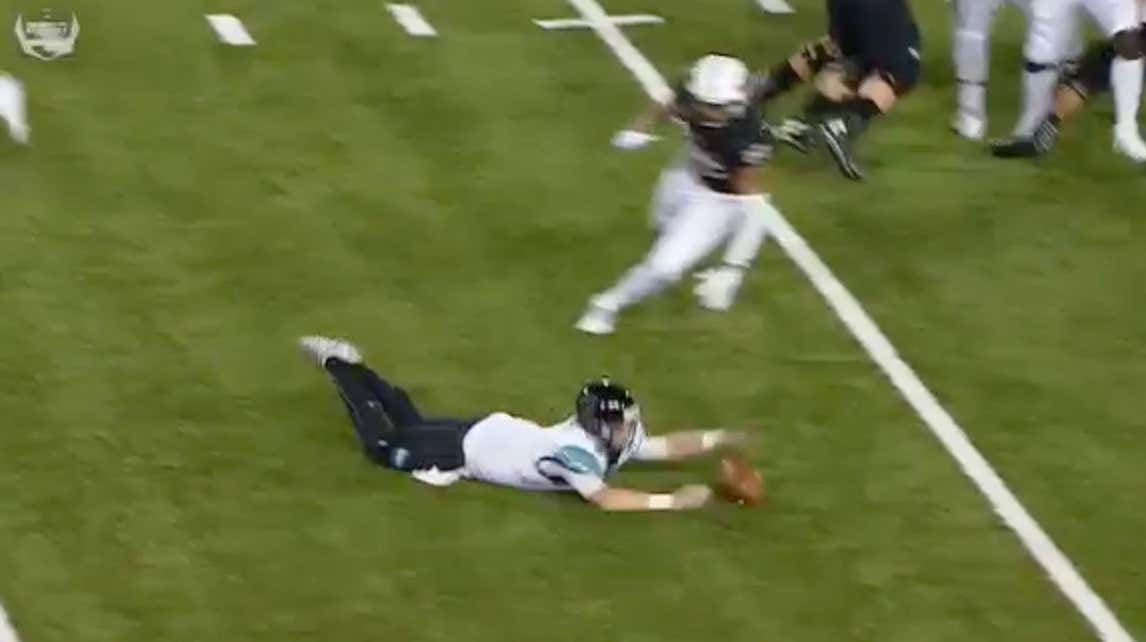 Our first safety bad beat of the season!!!! And it was with under a minute to go!!!! PHENOMENAL BAD BEAT!

I don’t even feel bad for the people on the under. Your pain is my entertainment.