With 9:07 left in the fourth, Indiana was up 9-3. Michigan State was starting a drive at their own 45-yard line. After completing a pass for 16 yards on 3rd-and-19, MSU converted on 4th-and-3. Before you knew it, MSU took the lead:

Indiana went three-and-out. Michigan State had a 3rd-and-9 with 2:40 left on their own 48. Two plays later, LJ Scott strolled into the end zone:

Yes, the bad beat was completed by a guy who was arrested 2 days earlier for driving without a license for the……SEVENTH TIME!

Thirty-one to ten. That was the score of this game at halftime. Just nine points away from cashing the over. Put in the bank and lock it up.

The second half included 257 yards, one missed FG, three turnovers on downs in the opposing team’s territory, and just 7 points. The over didn’t cash. Absolutely BRUTAL.

After getting a  pick six, Tennesse & under backers were feeling pretty, pretty, prettttttyy good. Even after Alabama put up a touchdown to make it 38-7, both Tennessee and the under were still covering. Tennessee was on Alabama’s 5 midway through the fourth. The cover would be secured with a field goal or touchdown, but Tennessee hasn’t been competent for the entire season why would they be competent in this situation?

Next thing you know two true-Freshman were connecting for a 60-yard TD:

This game was going to make the list just based on Boston College scoring 41 points, but the way the Eagles got from 34 to 41 shot them up all the way to #7:

The moose came out to play with a 41-point Boston College showing combined with a tipped pick-six to cover the over. This is why we hate mooses.

This is what the score looked like heading into the fourth quarter in Waco, Texas on Saturday:

Halfway through the fourth, the cover for West Virginia was gone thanks to two touchdowns, an onside kick, and a field goal. The final ended up being 38-36. West Virginia allowed Baylor to go on a 23-0 run in the fourth quarter alone.

With 4:20 left in the fourth, Kobe McCrary strolled into the end zone to make the game 17-10, Minnesota:

On the next play from scrimmage, Minnesota picked off Illinois and returned it to the end zone:

When it seemed Minnesota -13.5 backers had no hope, they suddenly did. All they had to do was stop Illinois from scoring, which seemed likely considering they had scored just 3 points since the first quarter, and the improbable cover became a reality. After converting two previous third downs, including a 3rd-and-22,  Jeff George Jr. had a 3rd-and-6 to keep the cover alive for Illinois with 23 seconds left in the fourth:

Everybody with Minnesota -13.5 was left with gambling blue balls.

When Tulane started a drive on their own 37 with only 18 minutes left in regulation, USF was up 34-7. Over those following 18 minutes USF missed 2 field goals. No big deal, right? Not like Tulane scored 21 points or anything like that.

To make everything worse for anyone who had South Florida, Darrius Tice took a run all the way to Tulane’s 9-yard line with 1:50 to go in the fourth. The following three plays looked like this: 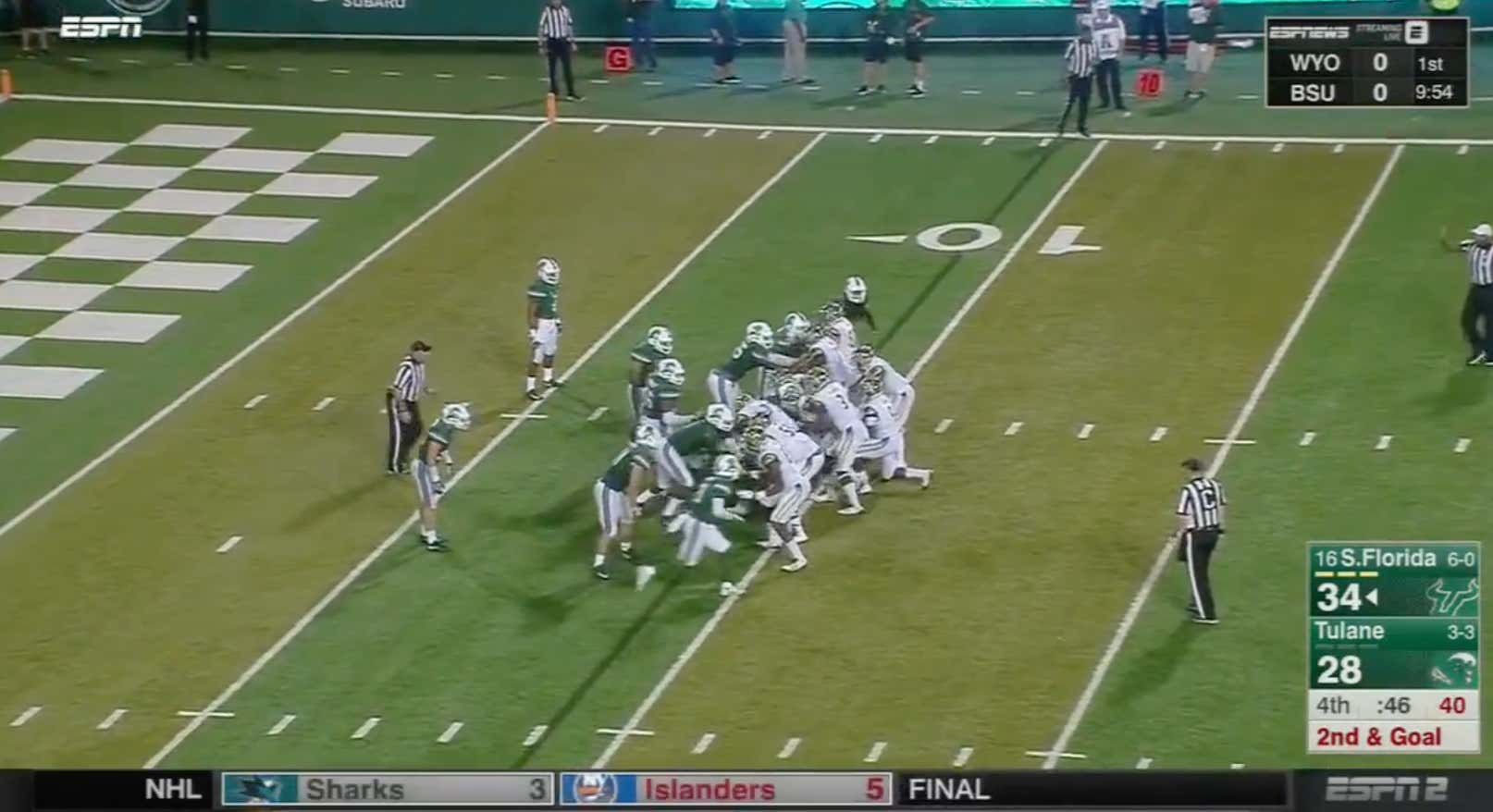 After New Mexico converted a 4th-and-15 on their own 41, anyone with Colorado State -9.5 should’ve known.

Over the next 10 plays, there were 3 penalties on Colorado State for a combined 48 yards. Somehow, some way, New Mexico still had a 2nd and goal from CSU’s 31-yard line. This all ended with this 4th-and-goal from New Mexico’s 12-yard line:

A Friday night moose. Nothing worse.

There was ONE minute and thirty seconds on the clock and the score of this game was 27-16. How on earth could this game go over, right?

No big deal, what are they going to do…get the onside kick?

Alright, fine, but they still have to score a TD!

Um…the 2-point conversion? You still gotta get that!!!

Wisconsin was up 35-13 with 1:16 on the clock in the fourth quarter. It was 3rd-and-3 when RB Bradrick Shaw ran 2 yards. After letting the clock run down to 0:41, Paul Chryst took a timeout. The rest is history: