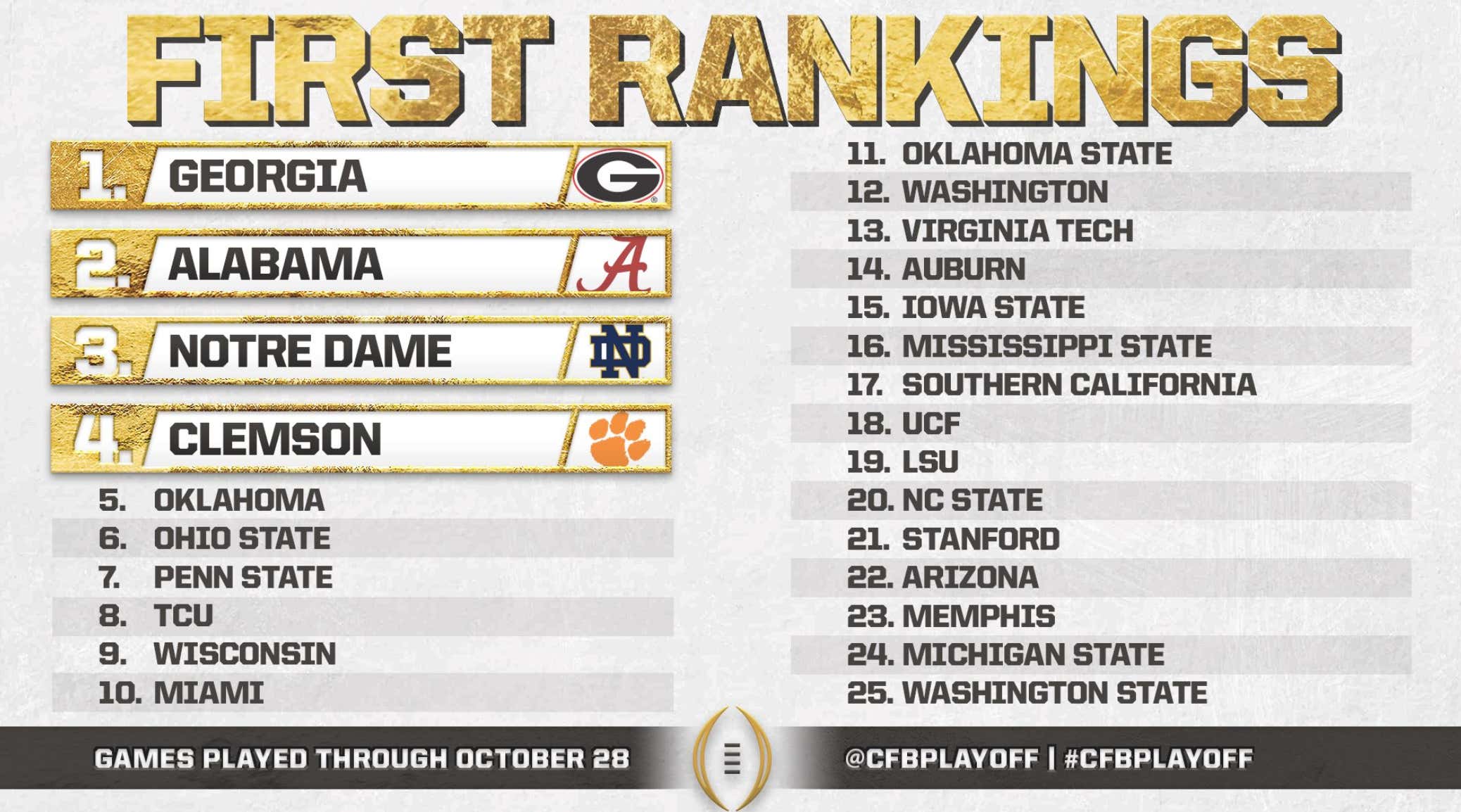 I am a big believer in the “everything will play out theory.” To everybody freaking out about the first rankings I have a simple message: 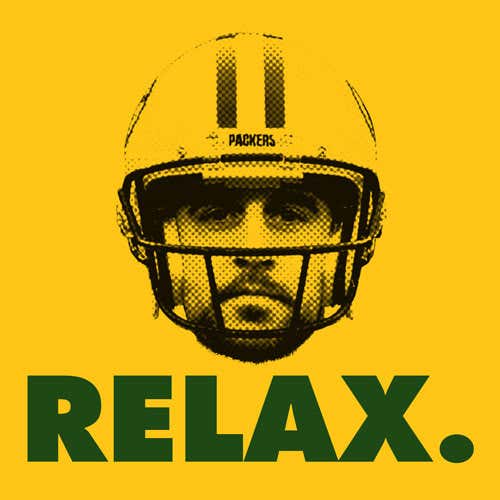 Everything will play out. I swear. That doesn’t mean we can’t look at these rankings and get a good look at the college football landscape for the rest of the season. Of course, the committee can flip-flop on what they favor when it comes to ranking their top 25, but we can now say with some certainty that if x team wins and y team loses, x and z team will make the playoff.

Here are some thoughts:

-I’m down with Alabama being #2 behind Georgia just for this:

Georgia being ranked ahead of Alabama makes sense. Their win at #3 Notre Dame is much better than Alabama’s best win at unranked Texas A&M. A debate over these two teams will be solved on the field in the SEC Championship game (assuming both teams win out), so there is next to no point to arguing over the top 2 teams at this point in time.

-The #1 ranking should be a point of pride for Georgia. This time last year everybody was doubting Kirby Smart as a head coach, now his team is atop of the CFP rankings and in the top 5 for the upcoming recruiting class. Good for Kirby and Georgia.

-Brian Kelly is another guy whose job was being called for at this point last year, now his team sits #3. Notre Dame’s success has been significant. Commanding wins over USC, Michigan State, and NC State pop out on a resume that can only get better with games against Miami and Stanford on the horizon.

-This brings us to the question over the value that the selection committee puts on conference championships. Over the past three years, we haven’t seen a situation where Notre Dame has been in the playoff talk at the end of the season. As you probably know, Notre Dame is an independent and will not play in a conference championship. Let’s say Oklahoma, Ohio State, Clemson, and Notre Dame all win out? Right now the rankings show Notre Dame over all three of those teams, but will that change if those teams win their respective conferences?

-In the scenario above, I don’t even mention how fishy things could get if Georgia ends up losing close to Alabama in the SEC Championship game. Will a one-loss Georgia make it over a Big Ten champion Ohio State?

-If Notre Dame wins out, but falls out of the top 4, do they bite the bullet and become a full time ACC member? The 2017 season has a chance to be similar to 2007, a season that changed the college football landscape forever.

-A little bit confused that Clemson is ahead of Oklahoma and Ohio State. Putting Alabama behind Georgia shows that the committee values only this year, not last, which they should. With that line of thinking, I don’t know how they could look at Clemson’s resume and say it is better than Oklahoma’s and Ohio State’s. Oklahoma’s one loss is against #15 Iowa State. Ohio State’s one loss is against #5 Oklahoma.  The Sooners best win is at #6 Ohio State, while Ohio State’s best win is against #7 Penn State. I look at those two resumes and say they are better than Clemson’s resume that has a loss at Syracuse (who lost to damn Middle Tennessee)  and top wins against #13 Virginia Tech and #14 Auburn. If Oklahoma beats #11 Oklahoma State this weekend will they jump Clemson? Or will another win against a top 25 team keep Clemson where they are?

-I’m glad that Wisconsin and Miami are #9 and #10. Both teams are undefeated, but neither have impressive wins. This shows that the committee is looking at more than just records. Miami has a chance to prove themselves in the upcoming weeks (Virginia Tech and Notre Dame) and if they do win out they’ll most likely face Clemson in the ACC championship game. If the Canes do win out, they’ll be in, but is there a possibility of Wisconsin winning out and not making the playoff? Would the committee put in a one-loss Notre Dame, Clemson, and Oklahoma over a 13-0 Wisconsin? They’ll all have better resumes.

-Penn State’s path would be difficult. They most likely won’t make the Big Ten Championship game, so they would need a combination of losses from teams above them.

-Chaos will happen. That’s just how college football works. We could sit here and map out all 20 possible scenarios and all would be blown up this Saturday.

-I doubt an expansion to eight teams will happen anytime soon. The playoff committee has said they aren’t planning on it in January. Eight would be perfect in a year like this, though. Each power 5 conference sends their champion, the top-ranked G5 team, and two at-large teams that has the same schedule as this years, but with the first four games being played around December 20th, would be CFB porn. The problem I have with it is asking these college athletes, who aren’t paid, to play 17 games is a lot. You could take away one non-conference game and make the regular season 11 games, but this would mess up the entire power dynamic of college football. The first games to go would most likely be the FCS games that teams play early in the season. Taking away those games will take away the checks FCS teams receive from top power 5 schools. Those hundreds of thousands of dollars are so important to keep those programs afloat. I know they don’t matter to most college football fans, but the trickle-down effect would not be worth it. Less FCS football programs mean fewer scholarships given to high school players. Fewer scholarships will give yet another reason for parents and kids not to play football. When there are fewer football players, high school programs and youth football leagues die off. Football’s future is looking bleaker and bleaker by the day and an eight-team playoff would make it worse.

-There is one way to solve this: pay the damn players.