It’s the second week of November and you know what that means, right? Civil ConFLiCT WEEEEEEK!

When great college rivalries are brought up the games that follow it are typically Michigan-Ohio State, Auburn-Alabama, Notre Dame-USC, Florida-Georgia. The one game that is often forgotten is the Civil ConFLiCT between UConn & UCF. This error is obviously because the lack of knowledge produced by our broken education system, so I have taken it upon myself to educate the interwebs with a history of this unforgettable rivalry.

November 1st, 2014: 5-2 UCF comes into Renchstler Field to play a 1-6 UConn team coached by first-year head coach Bob Diaco. UConn pulls out a 37-29 win in a game attended by under 30,000 people. After the game, Bob Diaco gave birth to a historic rivalry:

UCF Rivals-“We’re excited about this game. I mean it. I’m excited to continue this game. With all admiration and respect. All admiration and respect for Central Florida and Coach O’Leary. They’re spectacular. But we’re excited about this North/South battle. You want to call it the Civil Conflict? Maybe I’ll win my money and make a trophy. I’ll buy it myself. Put a big giant Husky and a big giant Knight on it. Make a stand. Put it in our hallway. The Civil Conflict. The loser, maybe they’ve got to put nutmeg on the stand when it’s not there and we’ll put a sack of oranges.

June 1st, 2015: UConn reports to campus for summer practice and classes. At 2:17 PM, UConn Football’s Twitter account tweeted a photo out that literally broke the internet!

By the end of the day, UCF had responded: 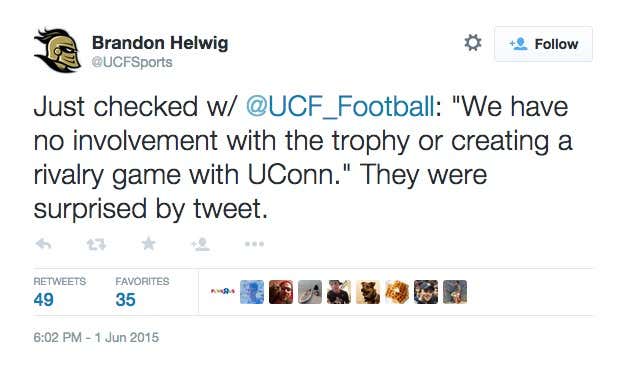 AP-“My experience is you’re more likely to have a rivalry against a team closer to where you live,” he said. “When you go 10 states away, I think it’s hard.”

Diaco said Monday he didn’t feel any need to consult with UCF before getting the trophy made and announcing he had named the game. UConn spokesman Mike Enright said “Civil Conflict” is a reference to UConn being the northern most university in the conference and UCF being “one of the most southern.”

Such situation gave rise to a couple amazing headlines:

“For us it’s exciting and I think it’s fun,” he said. “If you embrace it, you embrace it. If you don’t, you don’t. There was nothing before, so if you don’t embrace it there would still be nothing. And if you do, even a little bit, it’s more energetic and exciting.”

Hartford Courant-“Why do I have to call their athletic department to say we’ve got them targeted as our rival, period,” Diaco said on a Monday morning conference call introducing new media policies for the team going forward. “What control over that would they have and what do I care what they think?… If they don’t want to honor our rivalry, we’re not their rival, that’s on them. I don’t control what they want. If they don’t want to be a part of the trophy, I don’t care about that, either. They don’t like the logo … the logo is a university logo. And I took the logo off our marketing.”

August 4th, 2015: AAC media days happen in Newport, Rhode Island and reporters bring up the new rivalry Bob Diaco created because what else were they going to talk about, the 2-10 UConn Huskies?

Double G Sports-Whatever is the least offensive to everyone involved.   Take the civil name out? fine , whatever, whoever is the most offended you make the name.  It’s about our team and our lockerroom and the emotion coming out.

The stage was set for a HUGE game later in the season.

June 23rd, 2015: While everybody was enjoying the summer and some time at the beach, Bob Diaco was thinking about the ConFLiCT. That’s what makes this rivalry different.

October 7th, 2015: As everyone prepared for the upcoming ConFLiCT, Bob Diaco took the stage to talk about how he felt about the state of the rivalry:

Daily Campus-“Just trying to add some positive, fun energy to a football game and a conference, and a half of a conference. It’s just cool. I think it’s cool. I hope other people do,” Diaco said on creating The Conflict. “It’s something to energize the players and staffs on both sides, hopefully energize the fan bases on both sides so that we can have a great energetic game that’s classy and with high character.”

“We put both scores on there (The Conflict trophy),” Diaco said. “We’re trying to do the right thing, so that it’s taken as it’s intended to be taken, which is quintessential college football.”

UConn brought the trophy up from Connecticut:

UCF’s mascot, the Knight, turned out to not be that excited:

UConn ended up winning 40-13, moving them to 3-3 on the season. The Huskies were HYPED: 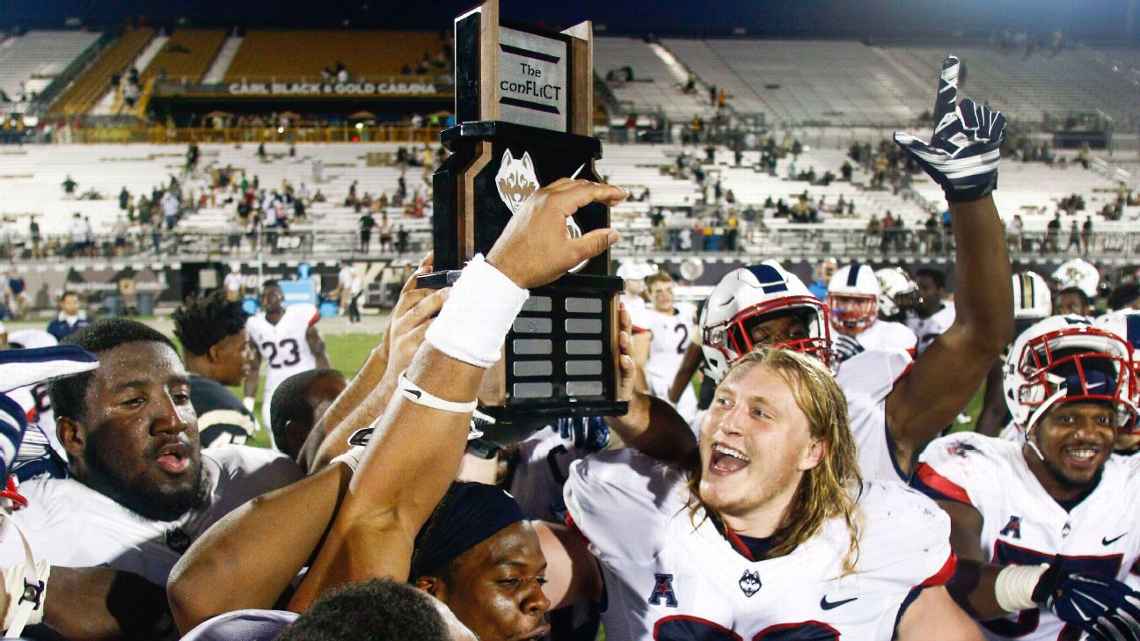 ESPN-“If it helps us win, I’m down for whatever,” Diaco said after the Huskies thumped the Knights 40-13. “It’s something you can point toward. … It’s in the preparation. It’s in the year leading up to the game.”

This tilted the rivalry towards UConn, two games won to one. After the loss, UCF was so unfocused/uninspired that they went on to lose their next six games and end the season 0-12. UConn had UCF RATTLED.

August 2nd, 2016: 2016 AAC media days did not feature any questions to Diaco about the ConFLiCT, but new UCF head coach Scott Frost was asked about it:

Hartford Courant-“I’ve had enough of that conversation, externally, so I’m not going to get into all that business,” Diaco said.

Diaco and UConn created this “rivalry” and were mocked for it. A New York Post headline went so far as to call it “the worst rivalry in sports history.”

Central Florida has never publicly embraced the idea, which probably has even less chance of taking hold as something substantial since the 2015 midseason resignation of Knights coach George O’Leary and the offseason hiring of his replacement, Scott Frost.

The trophy sits in a hallway on the second floor of the Burton Family Football Complex.

October 25th, 2016: Bob Diaco is asked about the Civil ConFLiCT at his weekly press conference and exposed himself as a full on crazy person:

“I don’t know how many articles you’ve written on the topic, and I don’t mean that in a negative way,” Diaco said. “I mean that in a good way. How many conversations, nationally, have been on this topic? Talking about two teams who would have no relevance, otherwise. That’s a bad thing?”

“Did it work? Unequivocally, you couldn’t possibly look at all the facts, based on all of the copy and conversation, and say it didn’t. You would have to have your head in the sand.

“The idea worked. And I pose this challenge–what matchup, even including the championship game, has been more widely covered than the ConFLiCT? What matchup? Bring it to my attention. I’m very interested.”

“So I don’t really understand why it was a bad idea, I really don’t. I’m sorry to everyone. I had an idea. What’s your idea?”

Diaco’s rant was so long about the ConFLiCT that he started talking about Nickelodeon:

“I got other ideas, too. Send me my agenda, they want to talk about networks, I got all kinds of ideas on networks. Right? Let’s target 6-year-olds to 16-year-olds. How about that? Eventually, they’re going to be 18 to 35. Let’s broadcast our games on Nickelodeon. Who owns that? Viacom? Let’s create some real intrigue. Let’s create some real followship. That’s all I was trying to do.”

Unfortunately, Bob Diaco ended the press conference by announcing the death of the ConFLiCT:

“It’s obviously not going to be a topic–unfortunately–any more. Sad. I don’t know what the new topic’s going to be, I hope there’s a new topic.”

December 26th, 2016: A day after Christmas, UConn fired the founder of the greatest rivalry sports has ever seen:

July 19th, 2017: UConn decided to bring back their old coach Randy Edsall to replace Bob Diaco. The question for Edsall’s program was clear: is the Civil ConFLiCT going to continue?

New Brittan Herald-What happened to the trophy following the game remains in doubt. Numerous UConn officials claim they have no knowledge of its final resting place.

“I honestly don’t know,” UConn Athletic Director David Benedict said Tuesday. “That trophy was there before I got there. I believe that trophy was commissioned and paid for by coach Diaco. And therefore if it left with him, I don’t know that, but if it did that’s fine.”

November 1st, 2017: UConn women’s basketball head coach Geno Auriemma goes on Pardon My Take and is asked about the ConFLiCT:

Monday: On the first day of rivalry week, 8-0 UCF’s coach Scott Frost downplays the significance of the big game that UCF has on Saturday. Classic #FootballGuy!

UCF’s not acknowledging of the ConFLiCT to keep their team focused on finishing the season undefeated stretched all the way to the media game notes!

“Because it was never a thing!” Good one, UCF! Nice joke! You sound like a bitter ex-girlfriend…now let’s stop JOKING around and get back to what is on all of our minds: WHERE IS THE DAMN TROPHY!

Saturday’s game is in Orlando at 12:00 PM. UCF looks to be favored in this one…

My hope is that Bob Diaco gets fired from Nebraska this week only to come back to UConn right before the game starts on Saturday. There will be epic music with pyros and everything. This will motivate the Huskies to pull off a HUGE upset and Diaco will then put Scott Frost in the tightest guillotine this world has ever seen on the UCF logo at the 50-yard line while screaming, “TELL ME WHERE THE TROPHY IS FROST!”

All of this probably won’t happen, but I’m hoping for a surprise appearance by the ConFLiCT trophy on Saturday. My fingers are crossed.

P.S. If you are wondering how Bob Diaco is doing in Nebraska: