After seeing 48 points in the first half, the second half drive chart looked like this: 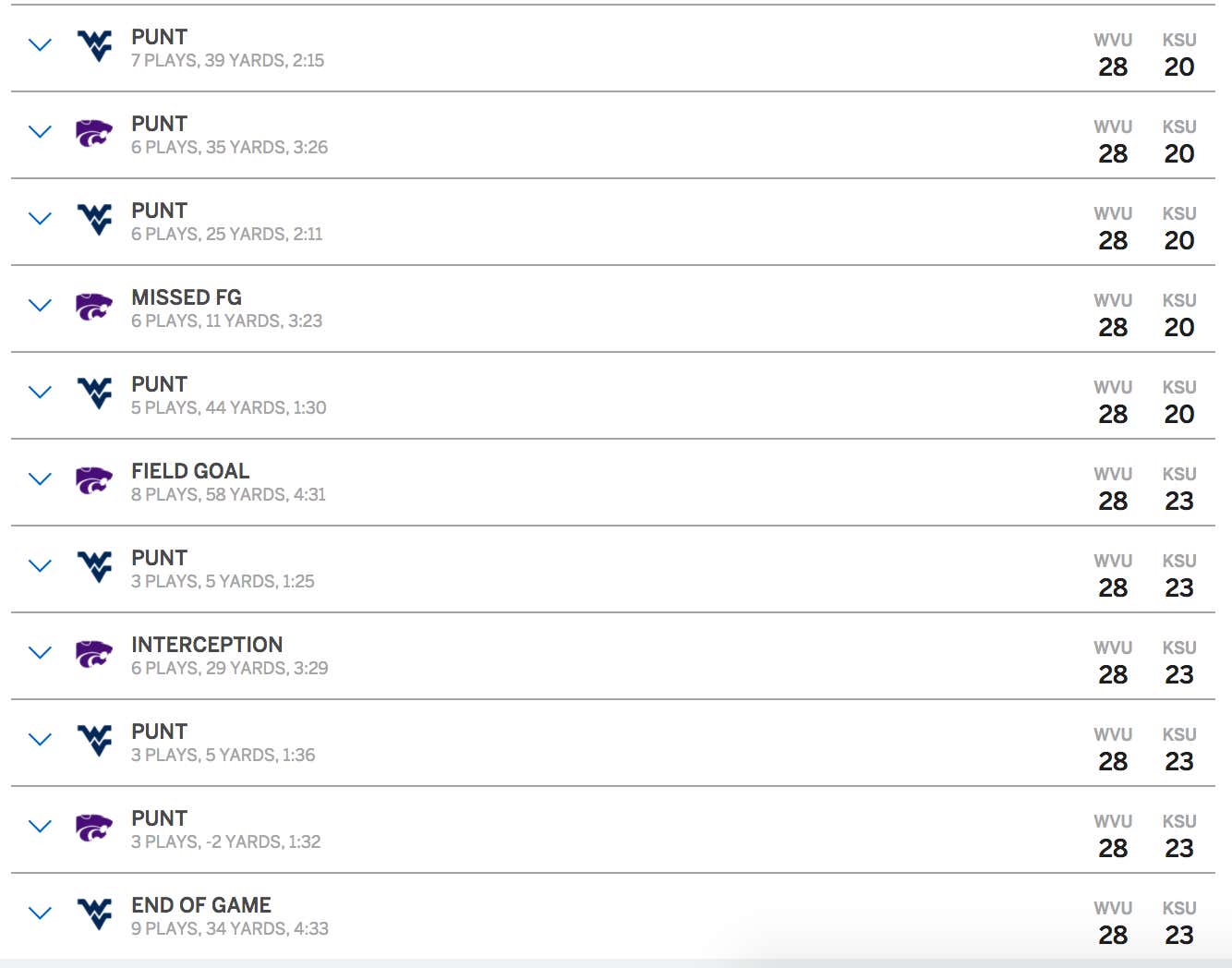 If that wasn’t bad enough, the over was this close:

With the two following plays in this formation: 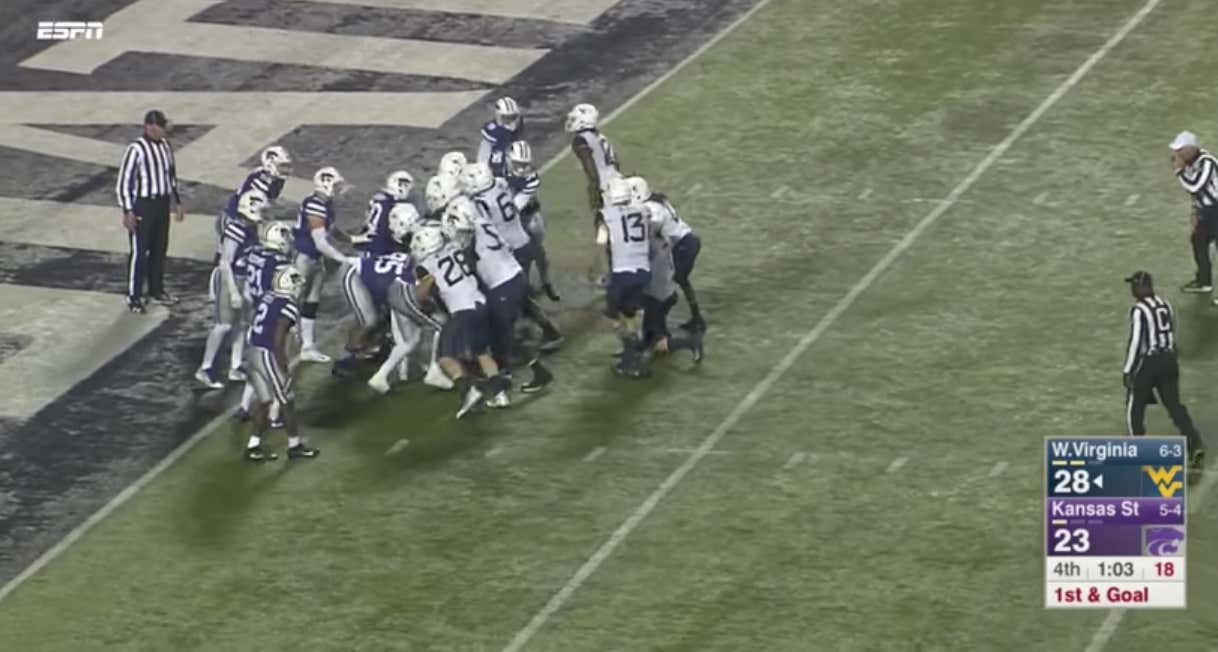 The worst formation in football when you are looking for the over to hit.

There was just under 25 minutes to play in the game when the scoreboard read Ohio State 45 – Michigan State 3. Over bettors needed just 9 points. Instead, those bettors unwrapped their present to find: punt, field goal, interception, interception, punt, punt, downs, end of game. Talk about getting a moose for Christmas!

If you had the over in this game, I completely understand if you don’t want Baker Mayfield to win the Heisman. Oklahoma scored a grand total of zero points in the second half after putting up 38 in the first. Look at this gross second half drive chart: 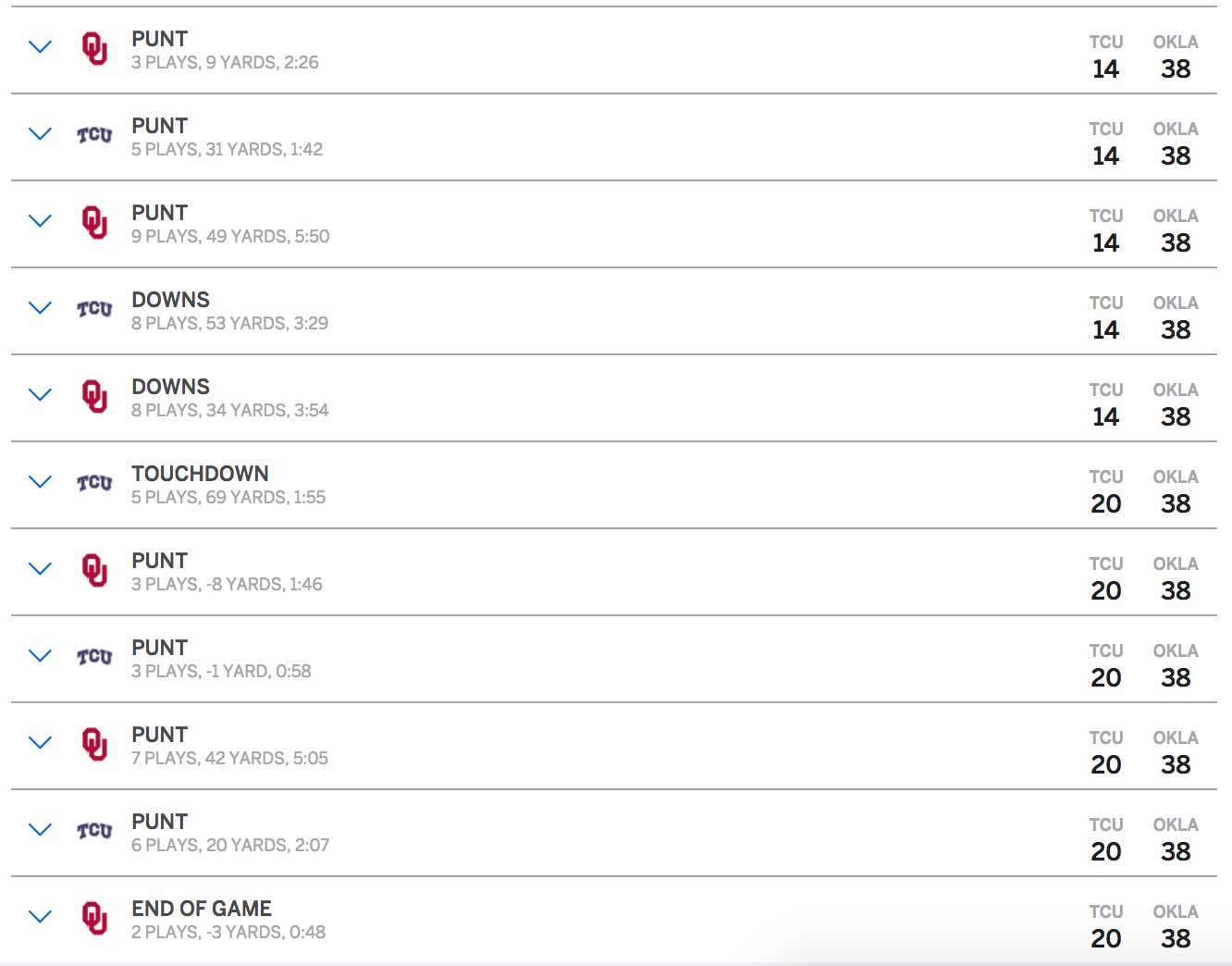 There were 6 minutes left in the fourth when Steven Montez threw an interception at his own 26. All that was needed to put the game over was 2 points, but USC went on to turn the ball over on downs.

The next play was a nine-yard gain only to see a fourth-and-one play fail. Under hit.

After a touchdown with 13:21 left in the fourth, Missouri & Tennessee scored a total of 26 points in the second half. Only 6 points needed to be scored to hit the second half over. After two punts, Tennessee drove down the field to disappoint their fans one last time in the Butch Jones era by fumbling it on 1st-and-10. Next thing Vol Nation knew, Mizzou’s backup QB was running all over their defense:

Wait, he was out? Where? When? TO THE REPLAY WE GO!

The next two plays were knees for Missouri. Leaving second-half bettors with a rough, rough loss.

2nd-and-goal from SMU’s 6 with under a minute to go. A touchdown wins it:

NOOOO! Don’t do that! NO!! Damn Midshipmen always listening to orders! SCORE THE TOUCHDOWN!

And a lucky overtime:

On 4th-and-3 from Louisiana Tech’s 3-yard line, Lane Kiffin had the opportunity to keep the total under by trotting out his field goal unit like a rational coach. Lane Kiffin isn’t a rational coach, though. He trotted his offense out there and ran Gregory Howell Jr. up the middle for a touchdown, hitting the over.

When Kelly Bryant fumbled the ball with 6 minutes left in the fourth, FSU was suddenly in Clemson’s territory down just three points. This was the next play for Florida State:

Florida State gained just one yard in the next four plays before turning the ball over on downs. Whatever! Clemson was just going to run the clock out n…oh no:

Amazing. No way to even know if he crossed the goal line. Refs just put their hands up because they wanted to hear the roar of the stadium one more time.

Absolutely BRUTAL combination of the total and spread being decided on the same play. Very rare.