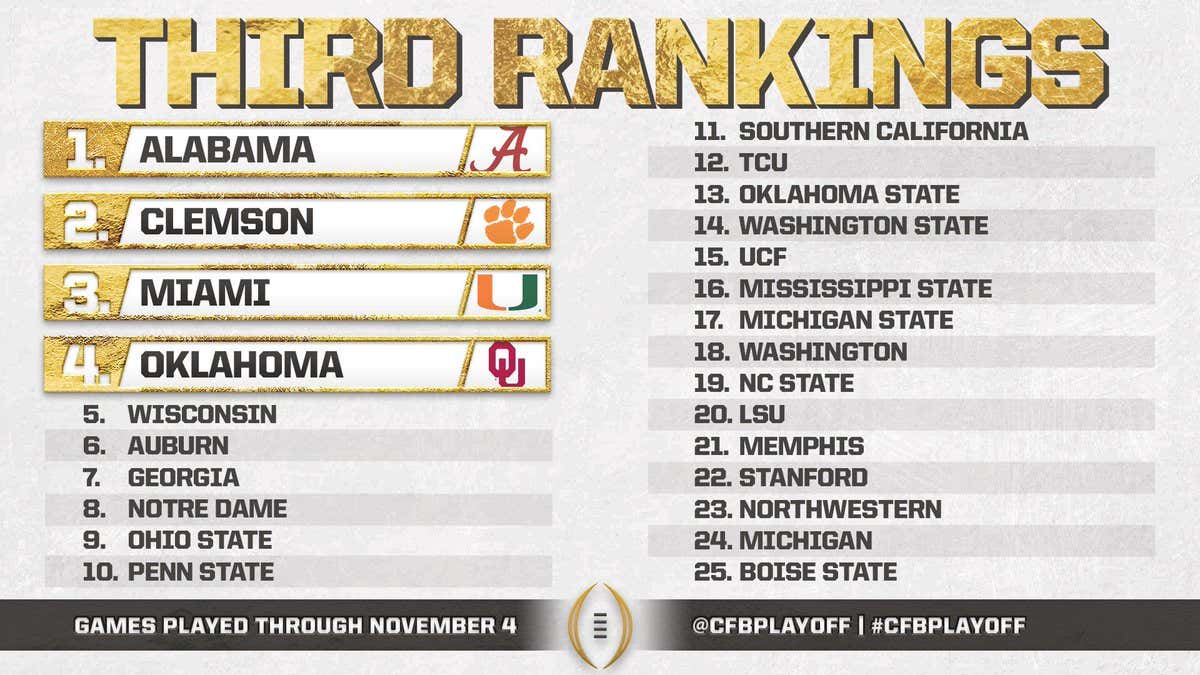 -Sick of hearing “if the season ended today, x team would be in the playoff.” When you are discussing a sport with a selection committee, saying such a thing should result in immediate jail time or at least a ban from all sports discussion for the next 3 months. Miami and Clemson are both in the playoff if the season ended today, but guess what! The season isn’t ending today and the two of them will play on the first weekend in December to decide which one of them makes the playoff. Stop with these hypotheticals. PLEASE.

-I know, they lost to Syracuse, but Clemson deserves to be higher than Miami. Before you have a breakdown let me explain: the Tigers have wins over #6 Auburn and #19 NC State. On top of that, they have four other wins over top-40 FPI teams (Louisville, Virginia Tech, Wake Forest, Georgia Tech). To compare, Miami has one win over a top-25 CFP team (#8 Notre Dame) and only three wins over top-40 FPI teams (GT, Wake Forest, Virginia Tech). You do have to factor in the turnover chain, which is equivalent to two/three wins over a top-25 CFP team, so I guess if you think Miami deserves to be higher you have a point.

-Speaking of the turnover chain, I did mention this in a blog yesterday, but I need to mention this song again because I can’t stop listening to it:

-Oklahoma does have a hell of a case to be higher than both Miami and Clemson. They have won at #9 Ohio State and #13 Oklahoma State, plus a blowout win at home over #12 TCU. Clemson has a total of 6 wins over top-40 FPI teams, only two of which on the road, while Oklahoma has 5. Boomer’s loss was to #26 Iowa State while Clemson’s one loss was to #45 Syracuse. Oklahoma has a stronger resume. Here is what the committee head had to say about Clemson ahead of Oklahoma:

Bad take here from Kirby. Kelly Bryant was hobbled by an ankle to start the game, but it’s not like Clemson was playing lights out football when he was leading the offense. The score was 17-14 when Bryant left the game, 7 of Clemson’s points being scored by their defense. Clemson wasn’t ready to play Syracuse that Friday night and don’t let anyone tell you otherwise. It wasn’t like they were up 24-0 with Kelly Bryant in the game and then Syracuse lucked their way into 27 straight with Bryant in the locker room. Oklahoma fans should be angry they aren’t above both Clemson and Miami.

-If you want to cheer for chaos, here is your most likely scenario you should cheer for: Auburn beats Alabama and then loses to Georgia.

-The “will the committee leave out a 13-0 Wisconsin?” conversation is finally dead. Great reminder for next year: everything works itself out. Believe in the process.

-If you are into gambling, go put some money on Ohio State 20/1 to win the national championship. If Alabama beats Auburn and Georgia, Clemson blows out Miami, and Ohio State stomps all over Wisconsin, they will find themselves in the playoff. Convincing wins over Michigan and Wisconsin will result in them jumping Notre Dame. They will be the #4 team playing Alabama. Nick Saban versus Urban Meyer followed by Baker Mayfield against Clemson. I think I need a new pair of pants.

-Not that it matters, but Penn State jumped from #14 to #10 this week after beating Rutgers and the team they lost to the week before being flattened by Ohio State. Weird.

-UCF…..still being disrespected. Imagine an 8-team playoff with Mac Loudermilk, the most electric punter in the country, stealing America’s heart?

Would love to talk more about the rest of the season/these rankings with anybody over on Twitter. Tweet me @JackMacCFB and we can be angry sports bros together!