Each week, I’ll sort the Saturday games into three categories to help you decide which games you will spend time watching.

Ain’t Come To Play School Game: A game you cannot miss. The players on the field aren’t at their respected universities to play school. This category, of course, is a tip of the cap to Cardale #12Gauge Jones.

Sneaky Good Bill Snyder Game: A game that you wouldn’t typically tune into, but if you are in front of the TV you should highly consider putting on. These games will be high scoring and/or competitive. This category is a tip of the cap to Bill Snyder, who has provided the college football world with more sneaky good teams than I can count on all my fingers and toes!

Butt Diaco Game: A game that is going to SUCK. Don’t watch this. Unless you have money on the game, there are 10 bajillion better things you could do with your time. This category is a tip of the cap to Bob Diaco, the buttiest of all butt coaches in college football history. 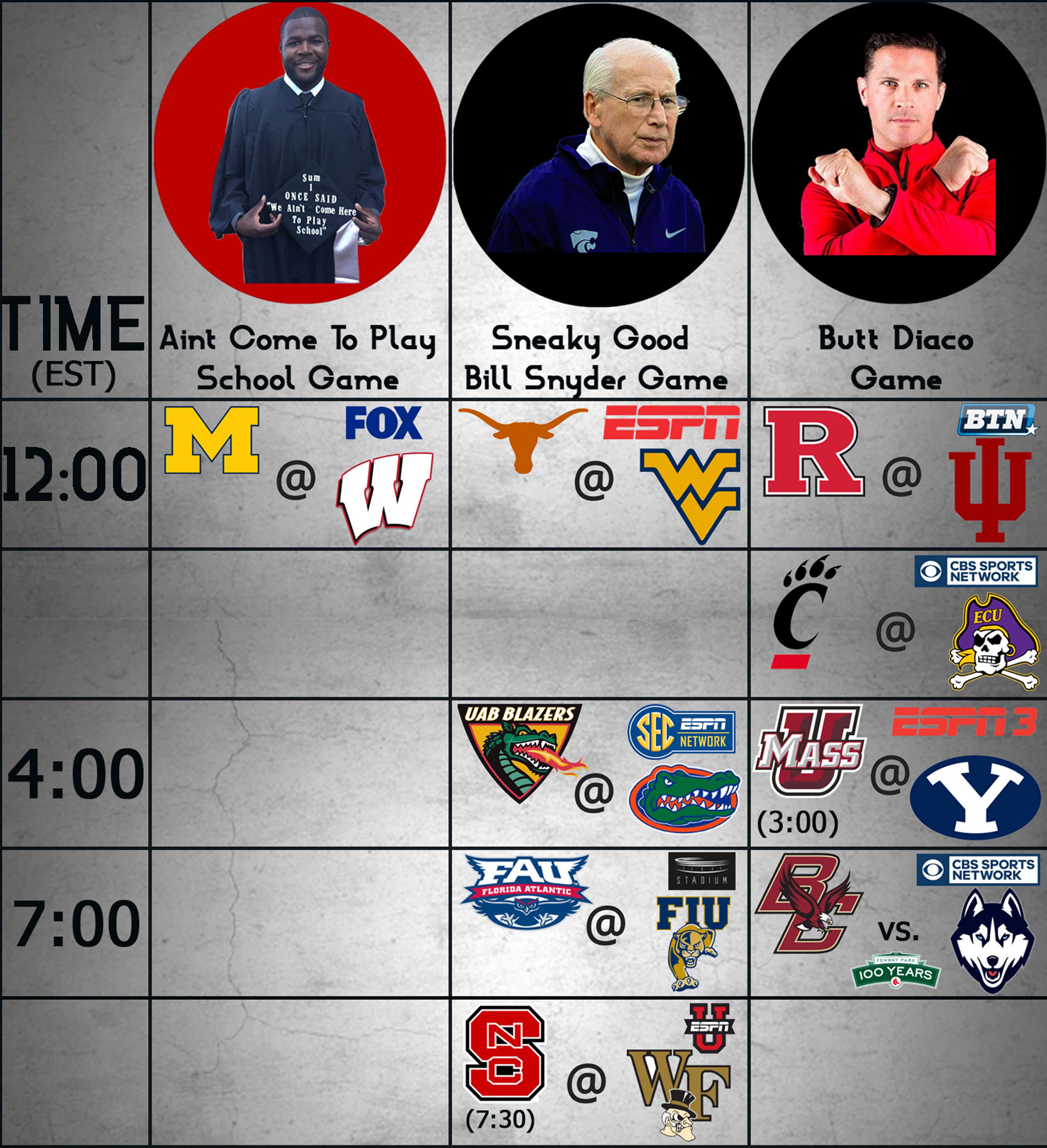 Before we start, I wanted to define a few of the advanced stats I’ve been using in these previews. The best stats I have found when analyzing this beautiful sport have come by Bill Connelly, who writes for SB Nation. You can find the glossary/Q&A for all of his stats he uses here and here, but here is a spark notes of the main stats I predominantly use.

Success Rate: How successful/efficient are you as a team in staying on track to move the chains. A successful play is defined as getting at least 50% of the necessary yards on first down, 70% on second down, and 100% on third or fourth down.

IsoPPP: Isolating points per play on only successful plays. This statistic aims to look at how consistently successful you are and when you are successful how explosive are you?

Adjusted Sack Rate: An opponent-adjusted rate of a sack rate, which is sacks divided by (sacks plus passes).

If you have any questions about these stats, shoot me a DM/Tweet @JackMacCFB.

You know the saying, “all stereotypes are born from some form of truth?” Yeah, well, the stereotype that Big Ten football is just two old school teams running it down each other’s throat for 60 minutes with a few (gasp!) play action passes thrown in there is true because of games just like this. I can’t recall the last time I saw a college football with a total under 40.

Michigan’s problem all season has been their offense. They rank 53rd in S&P+ and score the 65th most points per game in the nation. Good news for the Wolverines is their offensive improvement has been fairly noticeable since putting freshman QB Brandon Peters in. Against Rutgers, Maryland, and Minnesota, Peters and Michigan have almost doubled their points per game from the previous season average. How much does this have to do with Brandon Peters, though? Well, to be frank, not much. His average passing line has been 9-for-15 and 108 yards over the past three games. He has done a much better job at managing the offense than O’Korn did, but the success has been thanks to the run game. Their average rushing success rate over the last three games has been a whopping 62%.

How will the Michigan rushing attack fare against Wisconsin? The Badgers rank 25th in rushing S&P+ and 23rd in success rate on defense. Those are great numbers, but nothing phenomenal. Where the Badgers excel is in stopping the pass, ranking 6th in passing S&P+ and 3rd in passing success rate. Wisconsin DC Jim Leonhard will be able to load up the box considering the team trying to take advantage of one less guy in the secondary ranks 88th in passing offense.

I don’t see many ways Michigan will be able to put up points on Saturday. Wisconsin won’t have that much of an easier time either as Michigan ranks 6th in S&P+ defense. Hornibrook has a 5.8% interception rate along with taking a sack on 6.5% of his attempts. Michigan has the 5th best adjusted sack rate in the entire nation. Don Brown is my favorite defensive coordinator in the country and he will have his defense amped up to play in the underdog role.

There are going to be a bunch of sacks, tackles for loss, and 3-and-outs in this game. This game feels like a 17-14 Big 10 spectacular that your grandfather dreams about…strap on your iron jock and take the under.

If for some reason you aren’t intrigued enough by Wisconsin-Michigan, I can offer you an even better Big Ten game with a lot of incompetence disguised as “great defense, the way football used to be” in the same timeslot: Rutgers @ Indiana.

Don’t expect a lot of points here. Both these teams have a bottom-30 offense coupled with a top-40 defense. Rutgers only value added this year on offense was when they ran the ball, ranking 38th in rushing S&P+. They will go up against the 21st ranked Hoosier rush defense that holds teams to the 35th worst success rate when the opponent runs the ball. As it has been for a long time, passing isn’t an option for Rutgers unless their 117th ranked pass offense is cured overnight by the football gods.

Indiana’s one positive spot on offense has been passing the ball. Richard Lagow/Peyton Ramsey have a phenomenal WR in Simmie Cobbs Jr and led a Hoosier pass attack that ranks 42nd overall. Rutgers pass defense isn’t great, but will slow down Indiana enough with their 52nd ranked pass defense. Although ranking high overall, Indiana still has a below average success rate while passing the ball.

These two teams strengths on offense will be masked by their opponents defenses. Both of these teams are bottom 10 in IsoPPP, so there will not be many big-play opportunities. If Michigan and Wisconsin aren’t putting you to sleep on Fox, switch on over to this one and nap off that hangover….you’ll wake up to 10 points scored in the first three quarters.

Auburn is coming off a Seth Rollins-esque curb stomping of Georgia, one of the biggest wins in recent memory for Gus Malzahn and the Tigers. Next week Auburn has the Iron Bowl, which is a huge game without even the playoff implications this years game has. Auburn is not just battling a letdown after last week, but also a massive look ahead situation. There aren’t many sandwich situations like this every season. College sports are intriguing to handicap because of instances just like this. Often times we watch these super athletes on Saturdays and forget that they are still (allegedly) 18-23 year old kids. Think back to your maturity at that age, do you think you’d be able to get up for a game against Louisiana-Monroe at Noon? I’m 21, and I know I’d struggle. On top of that, Auburn will not keep their starters in for long after a physical game against Georgia last week.

Louisiana-Monroe won’t win this game, but 36.5 points is way too much considering the situation. Don’t think Louisiana-Monroe is some joke of a team, either. If you take them you are riding the 13th ranked offense in the country. S&P+ predicts this game to have a margin of just under 23 points. ULM has a kick return success rate that ranks them 14th and a punt success return rate that ranks them 35th. With good field positioning, a great offense, and an unfocused Auburn team, the Warhawks will cover.

Also, being on the side of the Warhawks just sounds cool, **Jocko Willink voice** “Yeah, I’m on the Warhawks.”

Georgia Tech is another team in a heck of a sandwich situation. After upsetting Virginia Tech last Saturday, Georgia Tech has to play Duke before taking on Georgia next week. Hell, Georgia Tech had a player propose after last weeks game:

Now they have to drive up to North Carolina and play Duke before trying to ruin their hated rivals season next weekend. As much respect I have for Paul Johnson, I don’t see his team being motivated for this one. Duke didn’t come through for us last week, but I still liked what I saw from the Blue Devils. Cutcliffe’s defense combatted the triple-option well and held Army to their lowest rushing total all year. The five-point differential was thanks to a blocked punt that ended in a touchdown for Army. Duke will be ready to defend the triple-option for the second straight week on Saturday. I love this situation for them and expect the Dukies to be motivated to keep their bowl hopes alive on a senior day.

I can see it now. UAB up 4 with 5 minutes to go in the fourth. The Swamp is as silent as a church. Feleipe Franks, who has been named the starter for the 8th time this year, drops back and throws an interception capping off a Cinderella season for UAB and nightmare for Florida.

S&P+ says UAB wins this game by 5 points! In Gainesville! UAB has been one of the best stories of the year. Bill Clark has taken a team that didn’t exist last year and built up a team full of winners. They rank 29th in expected turnovers, where Florida ranks 107th. They have a top-60 rushing and passing defense, while Florida’s pathetic offense ranks 105th overall.

Florida will have the more talented team on Saturday, but talent doesn’t matter when a team could give zero shits about the result. Sure, UF may come out motivated to play FSU next week (that game is going to be gross), but this week in Gainesville will only see one team motivated and that will be the BLAZERS.

At this point of the article, you’ve probably noticed that a lot of the handicapping I’ve done for this weeks slate is situational. At this point of the season, where some teams have everything to play for, while others have none, it is important to identify who is going to be more motivated. As I mentioned while discussing Auburn and Louisiana-Monroe, you cannot forget we are dealing with 18-23-year-olds!

UTSA is one win away from bowl eligibility, an important accomplishment for a school who first appeared in a bowl game just last year. Marshall, who is traveling to San Antonio all the way from West Virginia, is off an emotional game last weekend, which devoted to the 75 people who lost their lives in the plane crash 47 years ago. Now they don’t have much to play for as they are bowl eligible and have next to no chance to win their C-USA division.

Official #JackieGambling Picks Of The WEEK:

Stay tuned to my Twitter tomorrow! I love two FCS teams Western Carolina (@ North Carolina) and Wofford (@ South Carolina), but the lines are not out until tomorrow.