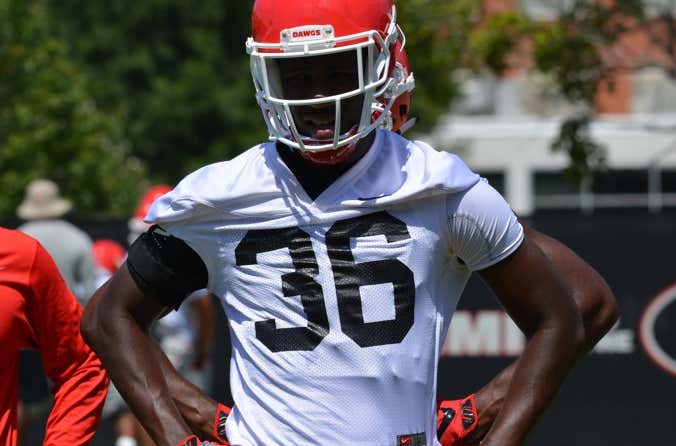 Dawg Nation — The arrest of Georgia freshman defensive back Latavious Brini on Tuesday night stemmed from an investigation into an incident in July when a counterfeit $100 bill was passed at an area pet store, according to the police report.

Brini was arrested on a felony charge of forgery after an arrest warrant was issued. He was taken into custody by the Clarke County Sheriff’s office and booked into the Athens-Clarke County Jail at 6 p.m. and released about three hours later on $5,700 bond.

Brini is alleged by police to have used a fake $100 bill to purchase $8 worth of merchandise on July 14 at Pet Supplies Plus, located at the Alps Village Shopping Center in Athens. The $100 bill later was revealed to be counterfeit.

Those Georgia boosters are giving out fake $100 bills to the freshman now?

Would love to know why Pet Supplies Plus in Athens is accepting a $100 bill for an $8 purchase. That screams fraud. I know the high school student working the checkout line isn’t thinking like that, but $92 in change? That’s got to set off something in your ole Georgia educated brain.

During the July 14 purchase, Brini is alleged to have provided a different name, Trevon Shorter, and address from his own when he agreed to sign up for a Pet Supplies Plus rewards card.

I wonder where Pet Supplies Plus ranks in places you are going to use a fake name at when signing up for a rewards card. I guess I understand doing this if you were a star on the team, but when you don’t appear on the depth chart? Either Brini has way too big of an ego with zero self-awareness or he’s just a, as Chris Jericho say, stupid idiot.

Eight days later, according to the police report, the same cashier noticed the same person return to the store and use a debit card under the name of Latavious Brini. The cashier notified the manager, who called police.

Ah, no, DAWG, what are you doing? Never go back to the scene of the crime! You think Silvio went back to Vesuvio? You take the canolis and go! That’s day one stuff.

Sure, Latavious may not have known it was a fake $100 bill, but it would be one hell of a coincidence using a fake $100 bill and signing up for a rewards card with a fake name in the same day.

Very fitting that Brini does play for the DAWGS and got arrested stemming from an incident at a pet store. Some would call it ironic. I’m really hoping this is some elaborate scheme that involves a bunch of Georgia players. They all are given a fake $100 bill from a booster, go and sign up for a rewards card at a Pet Store for $8, receive $92 of real money in change and then call it a day. Seems like a lot for just $92, but if it were to happen somewhere it would happen in a college football program.

This is the seventh known arrest for a Georgia player this calendar year, and the third since the SEC Championship Game. Linebacker Natrez Patrick and receiver Jayson Stanley were arrested on misdemeanor marijuana charges after a traffic stop hours after the championship. Stanley also was arrested on charges pertaining to DUI and speeding.

KIRBY SMART HAS LOST CONTROL OF THE DAWGS!

P.s. One of the arrests resulted in a charge that has since been dropped: