USA Today-To compensate him, the non-profit Cotton Bowl Athletic Association awarded him $1.2 million — a record for a bowl game boss, according to tax forms compiled by USA TODAY Sports. That included bonuses of $560,000 and is up by nearly $1 million from his total compensation in 2005….

….Such growth is fueled in large part by money from ESPN, including about $470 million a year it pays to televise the College Football Playoff format that started in 2014.

But after reaching new heights in recent years, such riches have opened these organizations to renewed criticism, especially with Congress taking aim at excessive compensation for tax-exempt businesses. It also reveals another stark contrast between the compensation earned by those who run college sports and the players who perform in them. In annual bowl games, players get a free trip and related benefits and are limited to $550 in gifts  from bowl organizers, such as wrist watches and sunglasses….

….In 2015, top bowl executives earned about $490,000 in average and median total pay, according to data compiled by USA TODAY Sports from 18 of the oldest tax-exempt bowl organizations whose tax forms were publicly available. That’s up about 27% for the same organizations in 2010, when the median and average were both around $386,000.

Not enough money for the kids, though, right? $550 is a lot, some would say too much, when you consider how much their scholarships are worth. Not like these kids had to work a full-time job to put themselves through college like your Grandpa did. 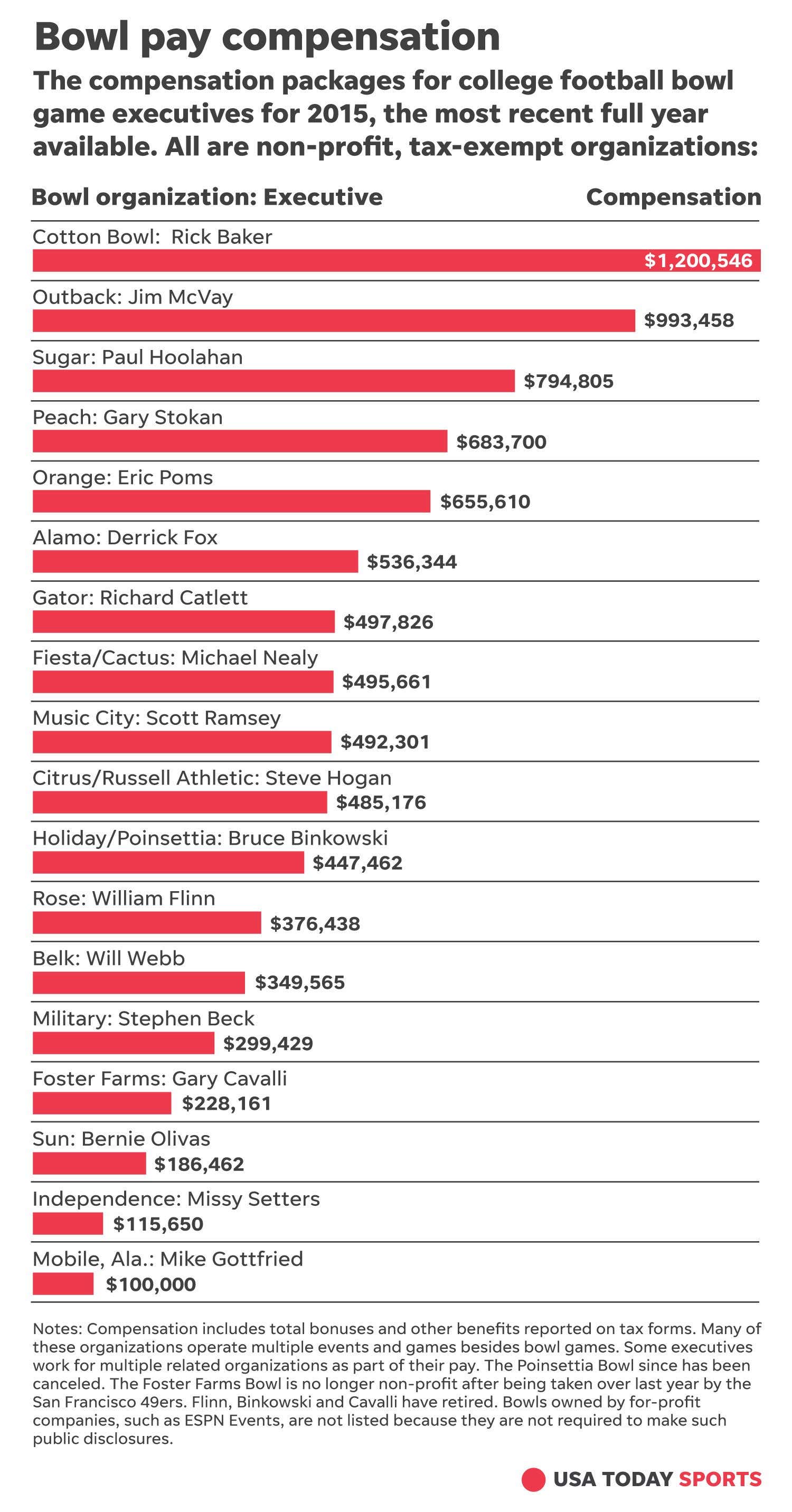 So, I think it’s time for Barstool to make their own bowl game after looking at this chart. Get the two most disappointing, non-bowl eligible, power 5 teams and put them in a game called the Adam C. Best/Jamie O’Grady Bowl or something like that. I’d be more than willing to be an executive of said bowl game. Put the game in Buffalo and play it in a blizzard. Have a bunch of Stoolies/#BillsMafia take over. Boom, we have gold and a lot of money.

Look at the circles that are being run to rationalize these huge paydays:

“A lot of those guys have huge numbers of volunteers that they manage,” said Waters, head of the Football Bowl Association, an industry trade group. “They’ve got staffs to accommodate, and they work all year. And when you compare that number to the people they do business with, it’s right in line with what they’re doing.”

Waters refers to major-college athletics directors, many of whom make more than $500,000 per year.  Other comparisons aren’t perfect but show a wide range of differences within this industry and compared to other large non-profits.

“They work all year.” Another reason why they should be paid so much. Not like those damn entitled football players who put their brains on the line for four/five months a year! Can’t compare to the horror of picking between the #3 or #4 Big Ten team for the Outback Bowl!!!

I understand these bowls make big money. They are great for the economy of the cities that they are based in, but that’s not the executives doing. Nobody comes to the Alamo Bowl for a speech from Derrick Fox about how to get paid hundreds of thousands of dollars to do nothing. They come to watch the players and coaches. For all the talk about how “meaningless” bowl season is, here is an idea: take all the money these bowl games make and give some to the players that win the game and a little bit less to the players that end up losing. The only players that get paid will be the ones who had a certain amount of snaps throughout the season/played in the bowl game. You think that wouldn’t add a little bit more sauce to the “participation season” that the bowls have become.