Back at it again with shitty bowl games on a random weekday in December. You may still be with family, you may be at work, but these games will be on to hopefully make your day a little bit brighter.

Inbetween all of this, FSU lost their head coach. Where are they now? Shreveport, Louisiana, a city that every child has dreamed of going to. What a wild ride 2017 has been for the Noles.

Wednesday’s game between the college football powerhouse and CUSA team has the second biggest bowl spread of the postseason. When I saw FAU was around a 20 point favorite against Akron earlier in the bowl season, I wasn’t that shocked, but this line has me scratching my head.

We’ll start this game preview with when FSU has the ball. The Golden Eagles rank 25th in S&P+ defense and the Noles rank 87th in offense. James Blackmon has done what he could this year, but half the time he had the ball he was trying not be killed by opposing pass rushers. FSU’s offensive line ranks 117th in adjusted sack rate (sacks divided by (sacks plus passes)) and 60th in adjusted line yards. One of FSU’s bright spots this season has been RB Cam Akers and Jacques Patrick, but they’ll have a hard time getting going against the Southern Mississippi defensive line that ranks 1st in adjusted line yards (statistic that attempts to, even to a small extent, separate the ability of a running back from the ability of the offensive line). Florida State will be able to score, but Southern Miss won’t be a pushover. The only area USM does struggle in is allowing explosive plays, ranking 77th in IsoPPP+ (An explosiveness measure derived from determining the equivalent point value of every yard line (based on the expected number of points an offense could expect to score from that yard line) and, therefore, every play of a given game), but Florida State ranking 46th in that same statistic isn’t that big of a concern. Southern Miss even excels in power success rate (20th) and stuff rate (1st), so they will have the upper hand when third-and-short and goal-line situations arise.

Which Dumb ATS Trend You Should NEVER Base A Bet On Is Fake?

Southern Mississippi’s offense isn’t spectacular, but it won’t hurt that FSU defensive stars Safety Derwin James, DE Josh Sweat, and LB Matthew Thomas are sitting this game out to prepare for the NFL draft. QB Kwadra Griggs has had himself a nice little season, throwing 15 TDs and just 2 interceptions. RB Ito Smith could be the next Kareem Hunt (small school RB bursting onto NFL scene) as he rushed for over 1,000 yards again this year. He will be able to get things going against a Seminole defense that ranks 53rd in rushing success rate. Smith isn’t Griggs only weapon, as he has WR Korey Robertson on the outside, who caught 73 balls for 1084 yards and 11 TDs this year. Southern Mississippi will have enough to put points on the board.

Now comes the part why I love Southern Mississippi the most: motivation. FSU started the season ranked 2nd and now they are playing in the damn Walk On’s Independence Bowl in Shreveport. Let that sink in. These are 18-23-year-olds, do you think they are going to be motivated to play in this one? Hell no. Southern Mississippi, on the other hand, has a chance to shock the CFB world and take down FSU. These players rarely get to play on national TV and also must feel slighted for not being recruited by schools like FSU. Every motivation angle points towards Southern Miss. On top of all that we’re getting 15 points!!!!! 15 POINTS!!!!

YOU KNOW WHAT TO DO!

Nothing like some football in the college football capital of the world, DA BRONX.

I should’ve done a video where I went to 50 bodegas in the Bronx and asked them to name one player on either Boston College or Iowa. I’d be willing to bet a large sum of money that the bodega owners went 0/50.

I love the Pinstripe Bowl every year because it often displaces a Big 10 fan base in a city they’ve never been to before. New York to a kid in Nebraska is almost mythical. This year, Iowa fans seem to be eating it up: 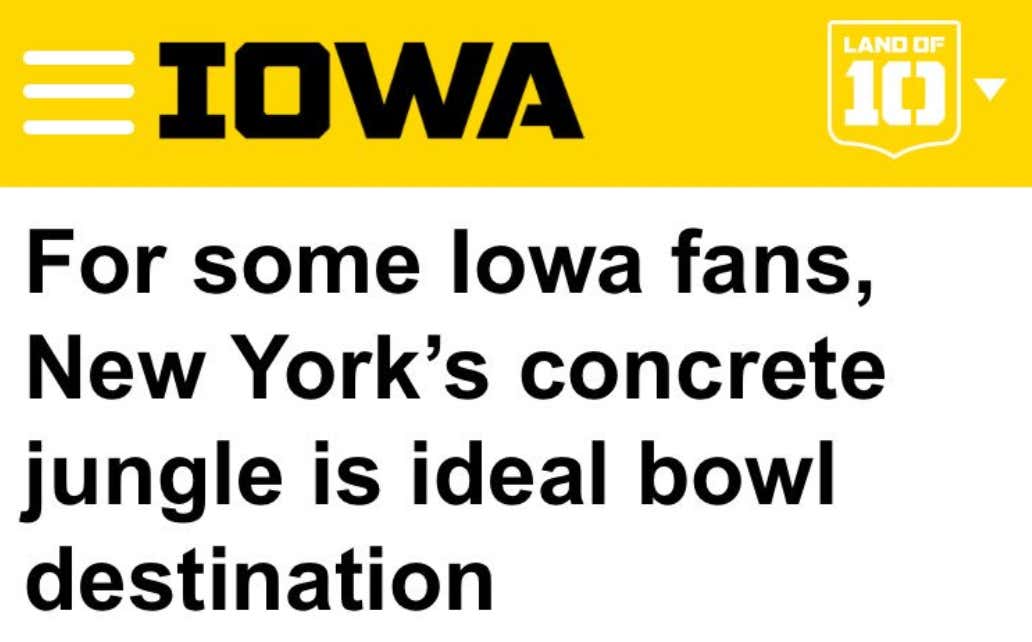 Can’t wait for a story on how 8 Iowa fans were robbed at gunpoint after they missed the Yankee Stadium stop on the D train and ended up in the middle of the Bronx.

Today’s game is looking more and more like a classic Big 10 bruiser. The forecast calls for a high of 25 degrees with winds of 10+ MPH. It snowed in New York on Christmas Day, so the Yankee Stadium grass and ground will be rock hard. This is going to be a game on the frozen tundra and it will come down to who has the most physicality. Sort of like an Army-Navy game in Yankee Stadium in the 40’s.

Boston College runs the ball the 22nd most in the country, so expect a lot of rushing from the Eagles. Iowa’s stats don’t show a perfect season defending against the run, but outside of their games against Saquon Barkley and Jonathon Taylor, they handled the run very well. They shut down the likes of Northwestern’s Justin Jackson, MSU’s LJ Scott, and Ohio State’s Mike Webber and JK Dobbins. Boston College has found themselves a diamond in freshman RB AJ Dillon, but Iowa will contain him with their 20th ranked rushing IsoPPP defense. Dillon may be able to get going seeing he is a part of a top-15 rushing offense, but QB Anthony Brown will be out for this game. Backup QB Darius Wade is nowhere near Brown’s level, which will allow for Iowa’s defense and LB Josey Jewell to zone in on stopping the Eagles running game.

Which Dumb ATS Trend You Should NEVER Base A Bet On Is Fake?

-Iowa is 0-5 ATS in their last 5 games after scoring more than 40 points in their previous game.

On the other side of the ball, Iowa’s success has come from QB Nate Stanley’s emergence. The Sophomore QB threw for 25 TDs and just 6 INTs, while leading the 30th ranked passing offense in the country. Conditions will be tough for him today and that’s not to mention Boston College’s 10th ranked passing defense. Iowa’s rush offense has a success rate that ranks 103rd in the country, so don’t expect them to be making a lot of movements down the field in that regard.

This game has a real 20-17 feel to it. I’m taking the under. Hopefully, we won’t see a 3rd straight OT in the Pinstripe Bowl.

The Foster Farms Bowl may be one of the best small bowls this season. One one side of the ball you have Khalil Tate, the Arizona QB who may be the most electric player in the country not named Baker Mayfield. On the other, you have Purdue, a program that looked dead in the water until Jeff Brohm came along this year. The line is tight and the total is high. We could see a very entertaining game between these two teams.

Purdue’s defense, which ranks 28th in the nation should be able to keep Tate in check. The rush defense ranks 6th overall, 3rd in success rate, 4th in opportunity rate, and 5th in adjusted line yards. That is great news knowing that Khalil Tate and JJ Taylor are coming to San Francisco with an elusive rushing offense. Purdue has struggled in one major area this year: defending against the explosive plays. Rushing IsoPPP ranks them 92nd, a place that Arizona’s offense ranks 2nd in. If you do adjust the numbers for opponents (IsoPPP+), Purdue’s defense does rank 29th because most of their big plays allowed came against Louisville and Lamar Jackson. That is good news for Purdue, but if there is one player that you can compare to Lamar Jackson in America it’s Khalil Tate:

Arizona’s defense is nothing to write home about. Rich Rod’s defense ranks 114th in the country. Jeff Brohm’s Boilermakers tout a top-50 success rate ranking and the 26th rushing offense, although they run the ball the 6th least in the country. The passing attack is fine, ranking 47th overall and will not find that big of a challenge in Arizona’s pass defense that ranks 102nd in passing success rate.

A lot can happen in this one. I don’t think the line offers much value. I lean with Purdue. Arizona has been to a bowl game 5 out of the last 6 years, while this is Purdue’s first appearance since 2013. I don’t think Jeff Brohm will struggle with motivating his guys:

That is a LONG list. Tom Herman cannot be feeling good going into this game without all these players. This game will be irrelevant in how we judge Herman, but man, playing without that list is going to be tough. I see 5+ NFL players on that list.

The turn around of Missouri by Barry Odom midseason this year was one of the most surprising storylines of 2017. After starting 1-5, Missouri rattled off 6 straight wins and were one of the most dangerous teams in the country by the end of November. The current win streak they are on has a lot to do with Drew Lock’s play at QB and leading an offense that ranks 3rd in IsoPPP+. Although Missouri ranks 8th in success rate, their points come through big plays, something Texas will be able to stop seeing they are also top-10 in stopping explosive plays on defense.

There is so much up in the air in this game because of the injuries mentioned above. This game should be a good one. Today is the first real day of bowl games with some serious talent. I lean with Missouri, but the play seems too obvious. Texas will have a bunch of motivated young players playing and Missouri’s 93rd ranked defense can fold at any moment. Going against Tom Herman as an underdog is something I don’t like doing, either.