All statistics are taken from Football Study Hall or Football Outsiders unless noted. All stats are explained here, here, and at the Football Outsiders link above. I prefer to use advanced stats, so when I say a team ranks 82nd in rushing defense, I am saying they rank 82nd in Bill Connely’s S&P+ statistics relating to rushing, not 82nd in rushing yards allowed a game. As always, just tweet me (@JackMacCFB) with any questions.

Very impressed with the New Years Six this year. Every game has intriguing storylines and the chance to be phenomenal. I am excited to see how UCF performs against Auburn, but the Fiesta Bowl sure has my attention as well.

A Nittany Lion would murder a Husky, but who cares, this is cool.

Penn State was one ridiculous comeback in the Horse Shoe and a ridiculous lightning delay at Michigan State from being the #1 seed in CFP. The Nittany Lions are very good, rank 5th in S&P+ and 4th in ESPN’s FPI. They have lost a massive key to that success, their OC Joe Moorehead, during the coaching carousel. Before Moorehead came in from Fordham (#RAMily), James Franklin was on the hottest seat in America. If it wasn’t for Moorehead’s electric offense, it’s likely that Franklin wouldn’t be in Happy Valley anymore. How much will his absence matter? That’s hard to quantify. What is easy to quantify is Washington’s 4th ranked S&P+ defense. They also may have Saquon Barkley’s kryptonite in Vita Vea:

Washington ranks 11th against the run and also has an adjusted sack rate that is the 6th best in the country. Penn State’s offensive line is one of their few offensive weaknesses and ranks 67th in adjusted line yards and 74th in adjusted sack rate. Washington will be able to dominate the line of scrimmage. On top of all this, Washington ranks 1st in IsoPPP, so they will also limit the explosive aspect of Penn State’s offense.

On offense, Washington is quite efficient (6th in success rate) and score the 11 most points per trip inside the 40-yard line. Jake Browning is a QB with big game experience and will be able to deliver the goods with the passing offense he leads that ranks 4th in passing success rate.

I expect this game to be close and relatively low scoring. I’d definitely invest in Washington if the line gets up to +3 or more, but anything under that it’s just a lean.

Similar to Memphis earlier in the day, Miami will be playing their bowl game in their home stadium. Kind of lame. At least Hard Rock Stadium is nice (when Jay Cutler isn’t playing in it).

When I look at this line all I can think of is the value we are getting on Wisconsin. Yes, their best win is against #ThefaU, but their only loss was to Ohio State, who was the hottest team in the country (outside of Clemson) at the time, by a margin of just six points. S&P+ ranks Wisconsin 6th in the country, while ESPN’s FPI ranks them 8th.

The matchup for Wisconsin is almost perfect. The Badgers excel when they can run (adjusted run rate that ranks 20th in the country) and Miami’s 42nd ranked rushing defense won’t offer much competition. When Jonathon Taylor can get going, Alex Hornibrook is a much better QB. For as bad as his reputation is, Wisconsin’s pass offense is still top-10 in the country. Hornibrook is a game manager, a guy who you can’t ask to do too much this early in his career. Against OSU he was asked to do a lot, against Miami that won’t be the case.

I would argue that Hornibrook is the best QB in this game. Malik Rosier did not end the season well with losses against Pittsburgh (a game he was benched in during the 4th quarter) and Clemson. The Miami pass offense, which ranks 78th in success rate, will go up against the 7th ranked Badgers pass defense. The Hurricanes won’t be able to run either, as Wisconsin also ranks 7th against the run.

I love the turnover chain as much as anyone does, but it has given a false narrative that Miami is a dominant turnover team. In terms of expected turnovers, Miami ranks 32nd, 9 spots below Wisconsin. Hornibrook’s interceptions do concern me, but thanks to their advantage in the running game, I don’t think he will be throwing into that tight of windows. Miami defensive line ranks 19th in adjusted sack rate, while Wisconsin ranks 80th in the same category on offense. That is concerning, but Wisconsin holds a similar advantage on defense (10th vs. 65).

Along with causing more expected turnovers, Wisconsin is much better on third downs. Their S&P+ rating on third downs ranks 1st on offense and 6th on defense. Miami ranks 104th and 73rd in those same categories. Wisconsin also outranks Miami on Special Teams (31st vs. 85th).

This game will be close, but Wisconsin is the better team. If Hornibrook protects the ball and doesn’t let the turnover chain to come out early, Wisconsin is going to ROLL.

Who is ready to SLAY SOME TAXES!!!! 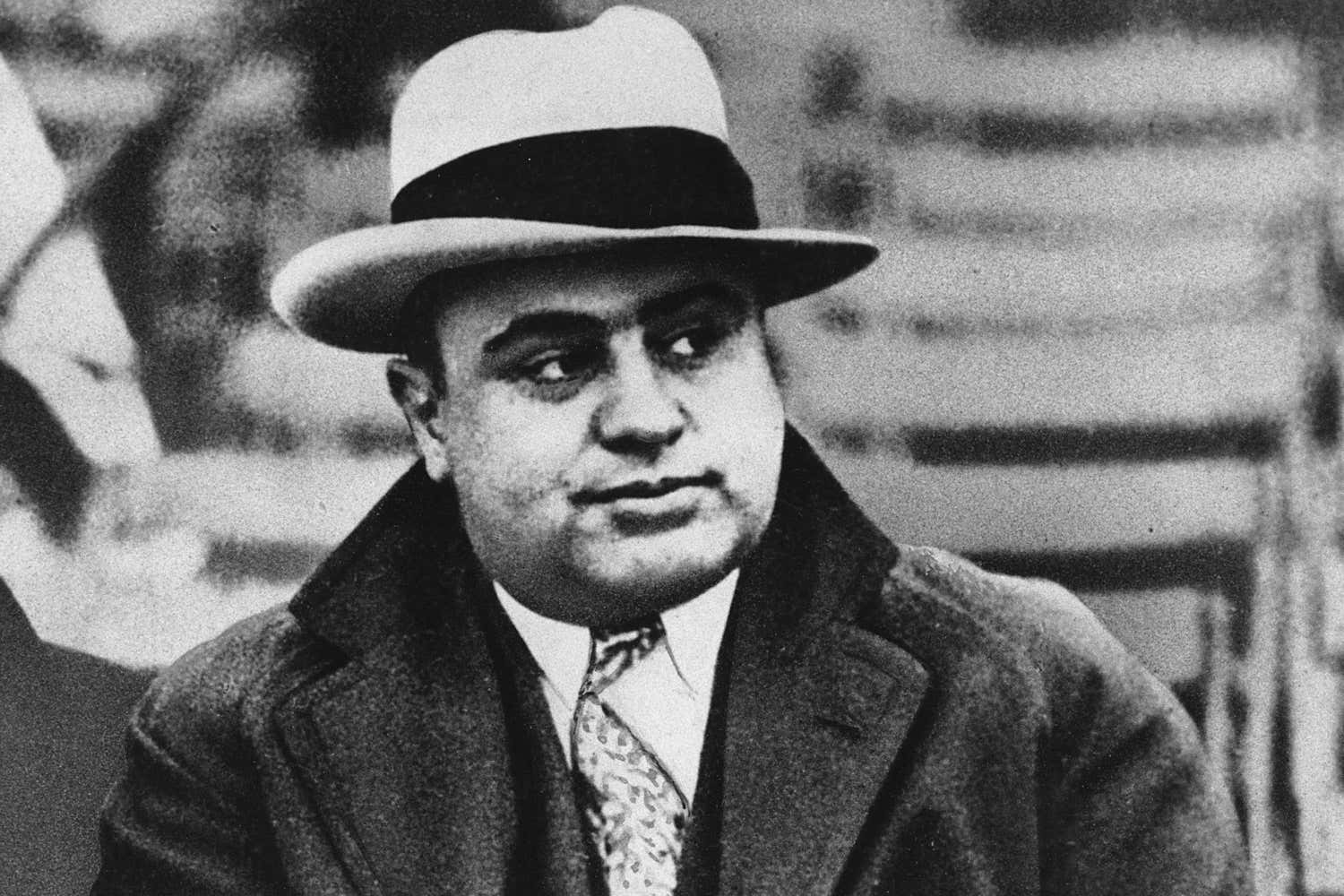 Next years TaxSlayer bowl should have Al Capone as their mascot. They can frame it in a simple “don’t end up like our mascot, slay your taxes with us instead!”

This will most likely be Lamar Jackson’s final game as a college football superstar. I feel like we, as a college football community did not appreciate Lamar enough. In his three years in Louisville, Lamar threw for 8,872 yards, 67 touchdowns, and just 23 interceptions for a QB rating of 144.7. Just those stats alone would be a phenomenal career, but Lamar added another 3,973 yards through the ground with an addition 47 touchdowns as a damn quarterback. We spent all this time debating over if he deserved the Heisman last year and if he’s an NFL QB this year. Overanalyzing is a part of being a sports fans, but sometimes in doing that overanalyzing, we miss out on enjoying great players.

Mississippi State is in an interesting situation here. The two drivers of their ship the past two years, Dan Mullen and Nick Fitzgerald, will not be a part of this game. In addition to those two, Mississippi State will be without their two offensive coordinators and defensive coordinator Todd Grantham. The Bulldogs ranked 63rd in offensive S&P+ this season and being without their starting QB will put a lot of pressure on RB Aeris Williams to have a record-breaking day. Williams was the main factor in MSU’s 19th ranked rushing attack and will go up against Louisville’s 95th ranked rush defense. He does lose his Bonnie to his Clyde in Fitzgerald who also rushed for over 1,000 yards this season. Louisville has struggled all season against the pass, as well. They rank 109th overall and allowed a passing success rate of 45.4%, which is also 109th in the nation! The only form of improvement we saw from Louisville’s defense was when CB Jaire Alexander returned to the lineup. Unfortunately for the Cardinals, Alexander will sit out this game, along with standout DE James Hearns.

The key to beating Louisville in the Lamar Jackson era has been a strong defensive line who can get to the QB. Mississippi State did exactly that this year, ranking 28th in adjusted sack rate (2nd on standard downs) and 14th in havoc rate. The second key to stopping Lamar is limiting explosive plays, which is not what the Bulldogs do well (120th in the nation). They particularly struggle against the pass, ranking 129th in passing IsoPPP. MSU has always been aggressive with their blitzes, allowing for big plays to happen when they don’t get to the quarterback. If the Bulldogs don’t get to Lamar, they are going to have a longggg game. My bet is that they do get to Lamar enough to slow him down, but will allow two or three explosive plays along the way.

This should be a good game. Enjoy Lamar Jackson for one last time in college football before he takes over the NFL (hopefully in a Jets jersey). He will have revenge on his mind after last seasons embarrassing bowl performance. I couldn’t tell ya what happens here, I lean MSU, but with their coaching situation and Lamar Jackson on the other side of the ball, I will not be investing in them.

Kind of a bummer for Memphis to end up in this bowl at their home stadium. I’m sure most players would prefer to go to a game in Florida or California over staying at home. Bowl games are an experience for an entire week, not just the 3 hours you are actually playing the game. Instead of spending a week in Tampa Bay or San Diego, Memphis is stuck in their same old dorms in a disgusting city.

All that being said, Memphis had a phenomenal season. They play fast (13th in adjusted pace) and smart (3rd in S&P+) on offense. Riley Ferguson has the 30th best QBR in the country and led an offense that has the 9th best passing success rate in the country. Iowa State’s defense has been phenomenal, ranking 31st nationally, so Ferguson will face tough competition. The good news for Memphis is Iowa State ranks 62nd in overall passing defense and 95th in passing success rate allowed. Memphis passes the ball the 22nd most in the country, so Matt Campbell will have to come up with a phenomenal gameplan to limit the damage by Memphis passing attack.

Iowa State has struggled on offense (71st), but Memphis defense hasn’t been anything special (106th) either. The Cyclones have been through three separate QBs this season but will start senior Kyle Kempt (13 TDs – 3 INTs) in this game. Through all three different QBs, Iowa State finished the season 55th in passing S&P+ and 37th in success rate. Their success through the air hasn’t been an accident, as they throw the ball more than Memphis does (11th most in nation). Memphis ranks 40th in S&P+ against the passing, but 85th in success rate allowed when their opponents throw the ball.

This game may sneakily be the best game of the day. Memphis will score fast, but Iowa State will have an easy path to respond with methodical drives drawn up by Matt Campbell & Co. Leaning Iowa State here in their first bowl game since 2012.