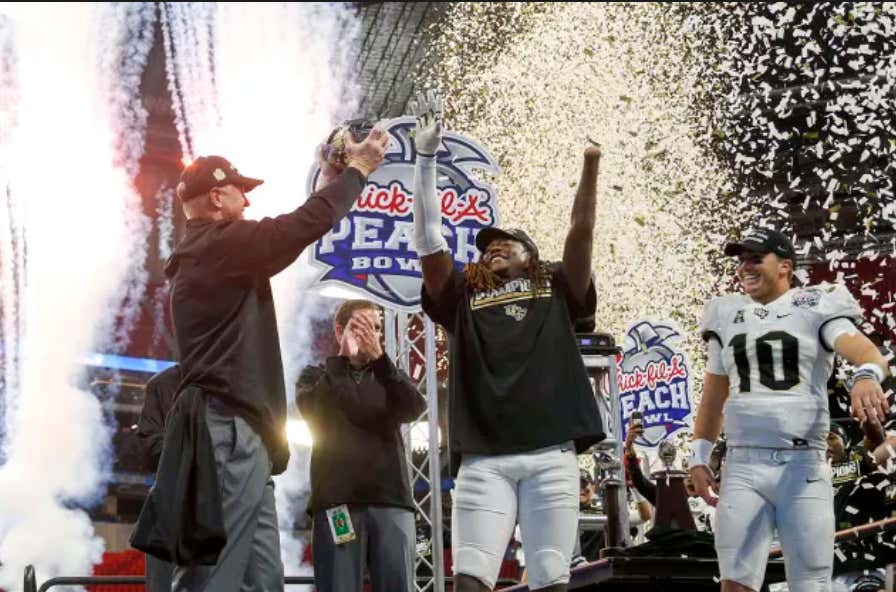 UCF’s season played out like a Disney movie. The team that was 0-12 just two seasons ago pulled a complete 180 and finished their regular season 13-0 with a conference championship. Throughout their season, the big, bad college football playoff committee never respected the little engine that could. They put teams with multiple losses over them week after week. Although they did not make it to the top, they were given a chance in a big game against one of the elites, Auburn. Nobody gave them a chance, even an intern at a sports blog said they would be outclassed, but UCF ended up slaying the dragon. Beating Auburn 34-27 in the Peach Bowl. A storybook ending.

It would have been great if it just ended there. We could play the “what if” game around UCF and the CFP, but we all, deep down, know that UCF wouldn’t contend with the Oklahoma, Georgia, Alabama, and Clemson’s of the world. Right? Well….it turns out UCF doesn’t think that way at all: 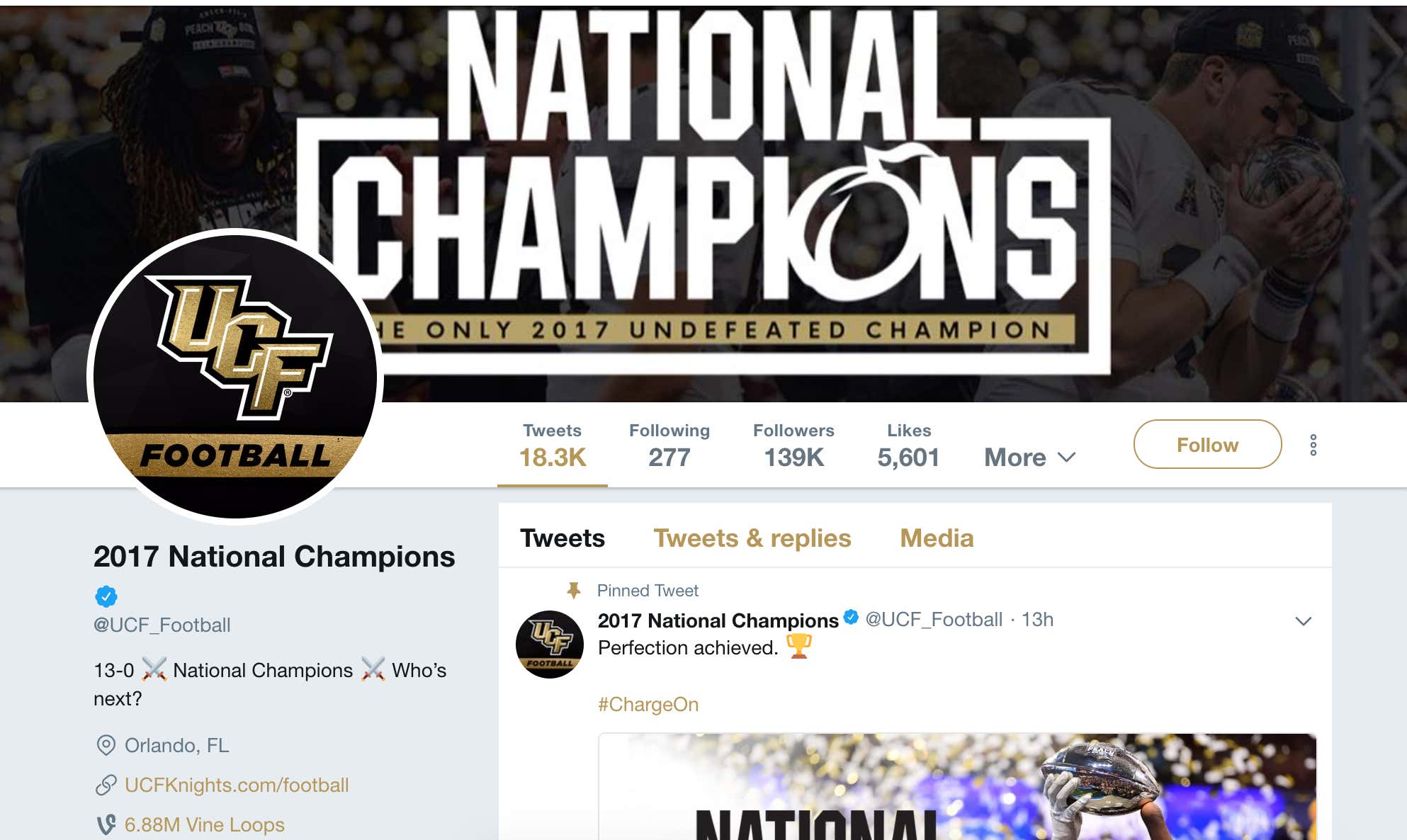 That’s cute and all, but maybe it’s just for the next week or something. Nobody with the likes of UConn and Austin Peay on their schedule would legitimately think they are national champions. Austin Peay doesn’t even sound like a schools name!

Interesting decision to hold a parade for team that didn’t win the national championship and couldn’t fill a stadium until the final game of the season.

Okay, time to get serious. Since UCF’s victory, a lot of people have been talking crazy on the Twitter. This includes college basketball analysts Mark Titus and Jay Bilas:

I was surprised these two had time on their hands to watch college football knowing the sport they cover is riddled with a new scandal every time I wake up, but it’s good to know they are expanding their horizons.

UCF did not deserve a shot at the college football playoff this year. Their best win was against Memphis, who they beat twice at home. If the UCF athletic director is so mad about not being included in the playoff, maybe he should have scheduled better out of conference opponents? OOC games are scheduled years in advance, but maybe the next time you have a 13-0 quality team you will have Texas, Michigan State, Virginia Tech, and Clemson on your schedule instead of FIU, Maryland, Georgia Tech, and fucking Maine. If you aren’t in a P5 conference and you want to make the playoff, you HAVE to schedule only P5 teams before your conference play begins. Yes, that will most likely mean less home games for you, but that is how the system works. You can either play the game or pout and complain about the system like a liberal arts professor.

To everyone who hopped on the “UCF should’ve been in!” Twitter train for the cheap RT’s the past few days, you have seemed to forget how college football works. Yes, UCF beat a demotivated Auburn team, with a coach in his first game of his contract extension, by 7 points in the same stadium they lost a month prior in the SEC championship game. For some reason, this automatically means to the Twitter keyboard playoff committee that UCF should be in the playoff because one game is more important than an entire seasons work. I don’t think any of those said jabroni’s are going to care about these stats (emotions>sound reason), but here are some just for the off chance that they do: UCF ranked 54th in strength of schedule according to Team Rankings and 72nd according to Jeff Sagarin Ratings. In overall rankings, UCF ranked 9th in S&P+, 15th in ESPN’s FPI, and 13th in Sagarin.

Now Jay Bilas, what the hell did you want the playoff committee to do? Ignore reason and sense just to please people, like yourself, who tune into college football when they feel like it? Maybe there’s a Young Jeezy quote that can help you work this out. Also, if you are going to play the “UCF beat Auburn, who beat Alabama” card, I don’t know what to say. That is the definition of a false equivalency. Purdue beat Iowa, who beat Ohio State, does that mean they should be in the playoff too? What about Troy, who beat LSU, who beat Auburn, who beat Alabama? And Middle Tennessee, who beat Syracuse, who beat Clemson! Oh, that’s right, we should’ve had a Purdue, Troy, Middle Tennessee, UCF playoff everybody!

If anything, UCF is an example why the playoff should expand to eight teams and include an automatic berth for all P5 conference winners and the best G5 team. This would leave 2 open spots for a team like Alabama and Ohio State as well. This set up wouldn’t impact the importance of every single game in a season, an aspect that makes college football great. It would also increase the meanings of conference championships and bring in the Cinderella aspect of a UCF-like team every year, a quality that the sport doesn’t have.

An eight-team playoff is on the horizon. The question is whether or not we see it in 3-5 years or in a decade. For now, we’ll have a UCF once every few years who claim they are national champions when they know they are not. They’ll hang a banner in their stadium, which will then become an internet meme. Stupid stuff like this is what makes college football fun, but hopefully, we get to a point where G5 teams like UCF do get their shot.

P.s. I hope UCF holds a parade and nobody shows up. That’s a bit evil of me, but stupid gets what stupid deserves.