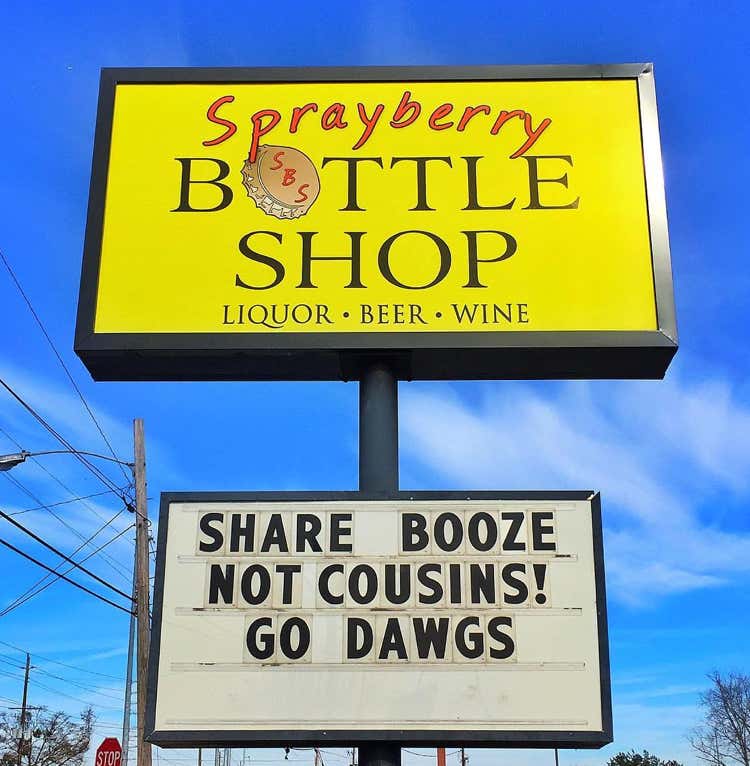 *Before I begin, I just want to say this is, of course, a consolation game. The real national champion has already been named. Nothing but respect for #MyNationalChampions:

Last game of the season and boy do we have a TREAT. I know some may be in the anti-SEC boat, but thanks to the playoff system in place the two best teams in the country will go up against each other tonight. You won’t see the high powered offense that Baker Mayfield brought to the table last week or the franchise changing QB we saw in Deshaun Watson last year, but that doesn’t mean we don’t have a must watch matchup here.

If that’s not enough for you, don’t forget the multiple storylines in play here. Kirby Smart is going up against his mentor, Nick Saban. A true Freshman QB is starting for Georgia. Alabama’s defensive coordinator is leaving to coach Tennessee’s football team full-time tomorrow morning. That same defensive coordinator played a significant role in recruiting and coaching every defensive player on Georgia (he used to be the DC for Mark Richt) with a significant role. Kirby Smart had a similar role for many of the players he will be facing. This game is in Atlanta, Georgia, just an hour from Athens. Both teams are off incredibly emotional wins. And oh yeah, it’s the national championship.

As you can see above, Alabama is favored by 3.5 points. 64% of the public has taken that number and bet it. Interestingly enough, we do have a bit of reverse line movement. Even with more tickets coming in on Alabama -3.5, the line has moved a full point in Georgia’s direction since it opened at Alabama -4.5. I’m writing this on Sunday night at 8:00 PM and this can obviously change, but up to this point that line movement has been because of the sharp money that has come in on Georgia.

Even though I am Ace Rothstein in my dreams, I’m no sharp, but I do assume they did have trouble deciding whether to involve themselves in this game and if so what side they wanted to get down on. Alabama and Georgia are very similar teams with their elite defenses (UA 1st in S&P+, UGA 11th) and strong offenses (UA 22nd, UGA 11th) which are powered by their strong running games.

All statistics are taken from Football Study Hall or Football Outsiders unless noted. All stats are explained here, here, and at the Football Outsiders link above. I prefer to use advanced stats, so when I say a team ranks 82nd in rushing defense, I am saying they rank 82nd in Bill Connely’s S&P+ statistics relating to rushing, not 82nd in rushing yards allowed a game. As always, just tweet me (@JackMacCFB) with any questions.

Alabama’s offense ranks 22nd in S&P+ offense thanks to QB Jalen Hurts and the four-headed RB attack of Damien Harris, Bo Scarbrough, Najee Harris, and Josh Jacobs. The rushing game ranks 12th overall, while the passing game ranks 3rd. The numbers are impressive as is the talent, but Alabama’s offense does have it’s shortcomings when you dig in a bit deeper.

I see Jalen Hurts as one of the most undervalued players in college football. The QB who led a(n almost) game-winning drive in the national championship game as a true freshman has had his job questioned ever since. Although new OC Brian Daboll was brought into open up the offense a bit more, Hurts has relied a lot on the RPO to achieve success through the air this season. The RPO isn’t something that Georgia, the 11th ranked defense in the country, is unfamiliar with. The Dawgs have faced four teams that use the RPO similar to Alabama. The Dawgs kept all of those teams (Notre Dame, Auburn, Mississippi State, Oklahoma) to lower passing success rates than the 40% national average (thanks to Collin Wilson of the Action Network for pointing this out). Along with this, Georgia’s LB’s have the 5th highest havoc rate in the country. By limiting successful passing plays and an LB core that causes havoc (aka Roquan Smith), the RPO will be limited, taking away Alabama’s bread and butter.

Digging deeper into Alabama’s passing game, you will see a substantial drop off once Jalen Hurts is forced into passing downs, where RPO’s are not run as often. Alabama’s success rate on passing downs ranks 70th in the country and their sack rate jumps all the way up to 108th. Georgia ranks 19th and 41st in those same categories on defense. On 1st down, Alabama has an S&P+ ranking of 3rd, but it drops to 15th on 3rd down (Georgia ranks 11th). We can see here that when forced to throw conventionally, Jalen Hurts is not very efficient. Comparing Jalen and Baker could take up an entire blog, but they do have their similarities. By doing what they did to Baker in the second half last week, Georgia’s defense will be able to limit any explosiveness that Jalen Hurts does bring to the table.

Alabama does have it’s edges, specifically on the running game. Georgia’s havoc rate for their DL is the 7th worst in the country and their adjusted line yards is ranked a good, but not great 29th. Alabama’s offensive line ranks 6th in adjusted line yards and 2nd in opportunity rate, a place that Georgia’s defense ranks 40th. If the RPO does not work, they can conventionally run the ball to success against this Georgia defense who did allow big gains to Rodney Anderson last week.

The biggest key for Georgia goes without saying, though….STOP THE BIG MAN!

I really can’t say enough about Jake Fromm. Just two months ago he looked like a chicken running without his head when Georgia lost to Auburn. Since then he dominated Auburn in the SEC Championship and then led one of the greatest Rose Bowl comebacks ever. This kid’s a true Freshman, who was committed to Alabama before flipping to the Dawgs and is now going up against them in the finals. You’ll hear a lot of “the moment is too big for him” talk in the lead up to this game, but don’t buy into that. Fromm is as ready as one can be.

Fromm, of course, isn’t the main focus of Georgia’s offense. That main focus is the thunder and lightning running attack Nick Chubb and Sony Michel bring to every game. Georgia’s rushing attack ended up ranking 7th overall this season and was the 4th most explosive in the country. Waiting for them on the other side is Alabama and their 1st ranked rushing defense, which also ranks 1st in limiting explosive plays. Against Oklahoma, Chubb averaged 10.36 YPC and Michel checked in with 16.45 YPC…those aren’t happening again tonight. It’s not just explosive plays that makes Georgia elite, their line ranks 12th in adjusted line yards and backs rank 9th in opportunity rate. Bad news again for the Dawgs is that Alabama ranks 7th and 3rd in those same numbers on defense.

Georgia may struggle from time to time when running the ball, but when they find advantages and draw up the right play, it’s most likely going to be very successful. However, Alabama’s defense stops the run 95% of the time and when they do make a mistake, they aren’t likely to let it bleed for long. Georgia hasn’t faced the number one rushing defense in the country yet, but they have faced three top-15 rush defenses. Against Notre Dame, they gained 5.2 YPC (10 carries over 5 yards). Against Auburn the first time, they gained 2.4 YPC (6 carries over 5 yards), but in their rematch at the SEC championship game, Georgia improved to 6.1 YPC (9 carries over 5 yards). It’s hard to say how successful Georgia will be against the stout Alabama front, but it is important to know they have been successful against other top rushing defenses.

When looking at the passing game, you’ll see a lot of the same stuff: strength vs. strength. Georgia ranks 5th overall in passing S&P+, Alabama ranks 6th. In passing success rate, Georgia ranks 20th and Alabama ranks 13th. One cause of concern for Georgia will be their sack rate on standard downs, a brutal 108th in the country. Alabama’s defense ranks 22nd in that stat and I assume will try to take advantage of getting after Jake Fromm early. Georgia will combat this similar to how they combatted it against Auburn and Oklahoma, with short passes. Jake Fromm is no Josh Rosen or Sam Darnold, but he makes smart decisions (5 interceptions) to keep the sticks moving. He has proven to be successful throwing on third down as well (6th in S&P+ on passing downs), which is impressive from a freshman.

Special teams are often forgotten about when capping a game. They are not as important as the defensive and offensive units, but they do affect games in ways you often can’t measure. How important was Georgia fielding a squib kick and then kicking a 55-yard-field goal to end the half against Oklahoma? It’s impossible to put the value on Georgia’s blocked field goal against Oklahoma. Special teams matter, especially in close games.

Georgia currently has the best special teams unit in the country, while Alabama ranks 40th. One of the biggest differentials in the two units are their kickers. Alabama’s Andy Big Fat Greek Wedding Pappanastos went 14-17 this year, but all three misses came from 40+. Georgia’s kicker is 17-20 on the year, but has an FG value that ranks 9th in the country. He showed in the Rose Bowl he can hit big field goals and has beautiful rec-specs: 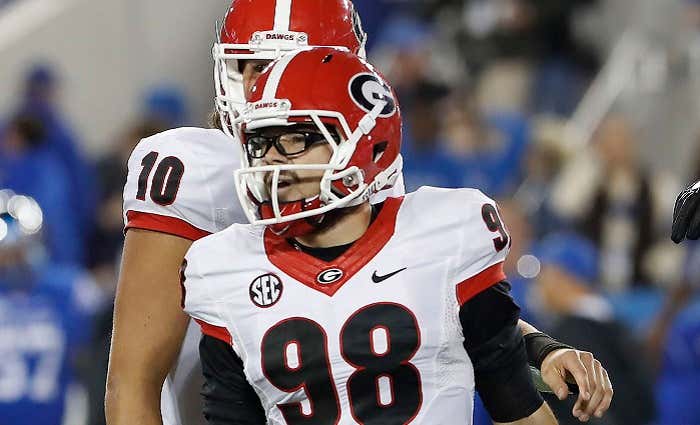 Georgia will also dominate in the return game, as they rank 2nd in kickoff success rate and 20th in punt success rate. Alabama ranks 56th in returning punts and 108th in returning kicks. Every yard will matter in terms of field position in this game and Georgia has an obvious edge here.

This is a tight game. As expected, we don’t see any huge matchup advantages on either side of the ball. Anybody selling you an “I have my GAME OF THE WEEK OF THE YEAR OF THE CENTURY PLAY ON TONIGHT’S GAME” is full of shit. If anything, you should be excited for this being a great game and not expecting a huge matchup advantage leading to your ticket cashing.

With that being said, I’m going with Georgia here. I respect Alabama’s defense, but I still believe that Sony Michel and Nick Chubb will be able to get things going enough to open some passing lanes for Jake Fromm. Georgia’s defense will contain Jalen Hurts on the RPO, taking away Alabama’s bread and butter. The Crimson Tide’s rushing attack will be able to conjure up some success, but it won’t be enough to dominate the game. Georgia’s pass defense will have a battle containing Calvin Ridley, but they will be up for the task and Jalen Hurts is no Tom Brady when throwing from the pocket.

I just see a hard-hitting, strength vs. strength, football game that will come down to the little things. That includes kicking. The difference between having confidence in your kicker from 48-53 yards or punting the ball may be the difference in who wins this game. Georgia has that advantage. I am more confident in Jake Fromm than I am in Jalen Hurts. Also, I will be getting 3.5 points with Georgia. I could easily see this game coming down to 3 points, which would equal a victory either way. I’m very excited for this game, as you should be as well. Let’s call the DAWGS AND CASH THE FINAL TICKET OF THE SEASON!!!