All the boys are buzzing about Josh Allen. From “he’s the next Jake Locker” to “the Browns are going to take him with the #1 pick,” everybody has an opinion on the Wyoming QB.

Yesterday, Josh Allen went on Cleveland’s 92.3 The Fan for an interview:

I remember playing football in middle school and fumbling in one of my games. My coach at the time, Matt Kocay (absolute legend that none of you know), told me that if I wanted to see the field again I better start sleeping with a football with the 5-pressure point technique. I didn’t really climb up the football ladder outside of high school, so maybe Josh Allen should reconsider sleeping with the football. Just a tip.

The Madden being “dedicated time to football” is a bold claim, but I get it. I’m just very sick of watching football games with friends and them yelling “PUT A SPY ON THE QUARTERBACK!!! HE’S SCRAMBLING TOO MUCH”, “GOTTA SWITCH TO COVER 3.” Just because “Ask Madden” suggested you did this doesn’t mean it works in real life, but thanks for the tip. Real intelligent.

“Stats are for LOSERS” is the best take of all time. We saw it from Mel Kiper last week:

And, now, Josh Allen is running with the same pitch. You have to respect it. Mel Kiper is Josh Allen’s wingman and Josh Allen is going for the hottest girl in the bar, which happens to be the Cleveland Brown’s. They are spewing complete nonsense, but remember:

The girl may fall for you if you act like your completion percentage in the Mountain West was more of a 66% than a 56%. While you are at it, flip the 6 & 7 in the YPC from the 2017 season, and you have a 7.6 YPC statistic that will get the ladies GOING.

NFL Draft season is upon us, folks. We’ve got 3 months left of this stuff. Can’t wait for Josh Allen’s pro day where he throws the football around like Tom Brady, with no defenders and in shorts and a t-shirt. Who cares about how he looks on the field when he has “one of the best pro days scouts have ever seen, according to sources.”

How can you NOT love a guy with mits like him: 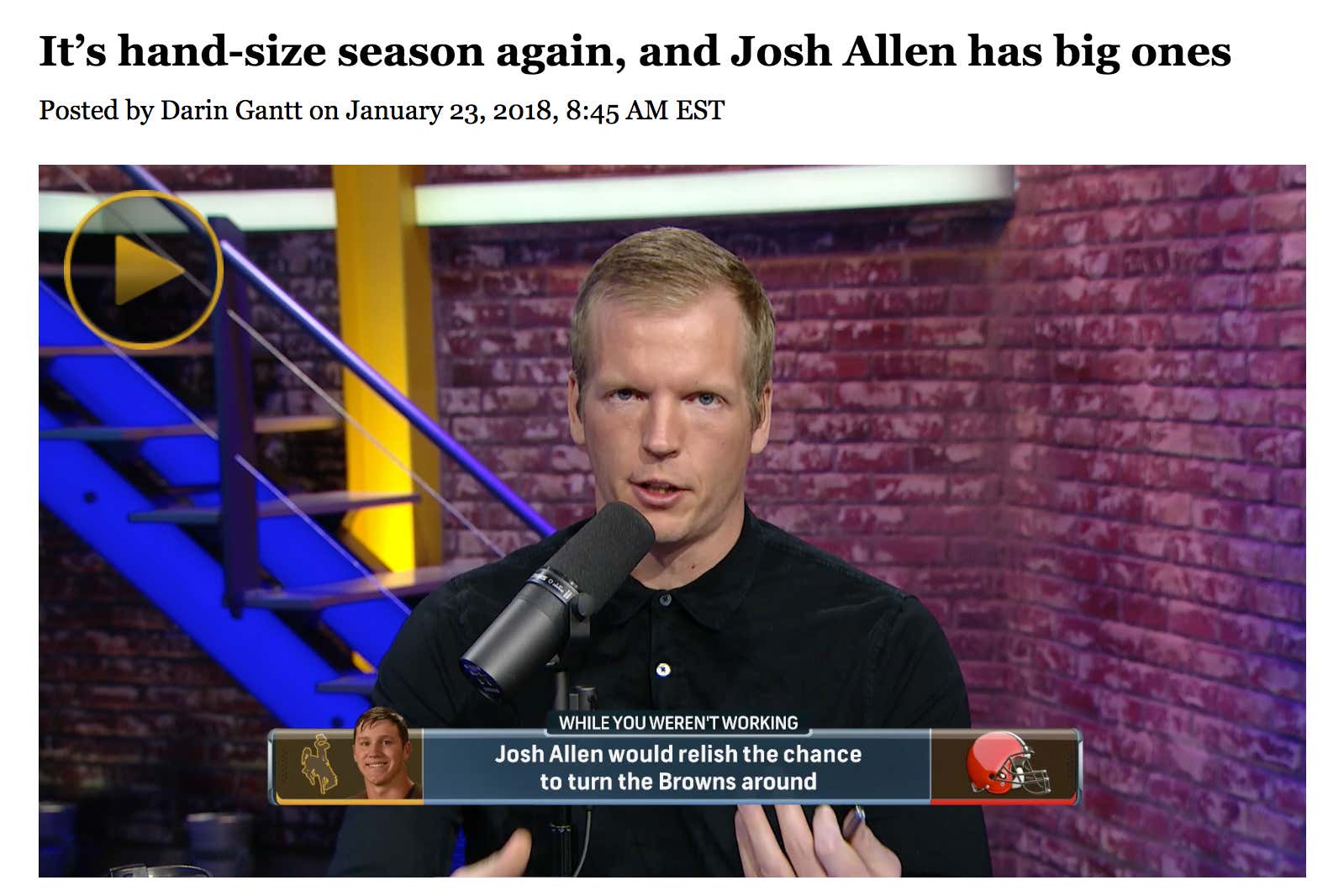