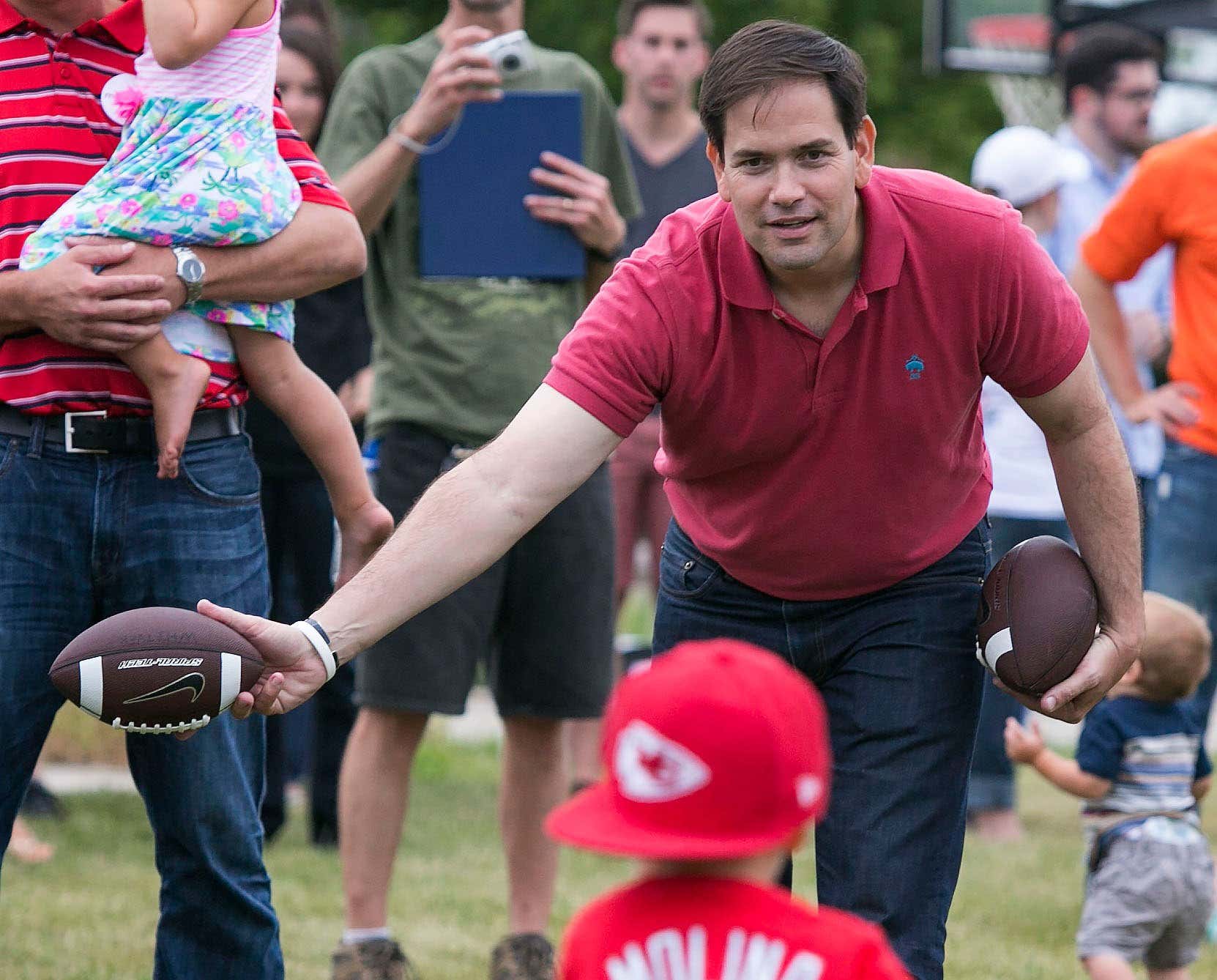 The New York Times published an article today on the annual USA Football dinner that occurred over the weekend. The dinner featured a bunch of pro football hall of famers and other former coaches/players discussing the second civil war to occur in America: #TheWarOnFootball. The article does a great job quoting some of the speakers at the dinner, one of which ended up being our President’s dear friend Lil Marco:

New York Times-“It does come with some risk,” said Senator Marco Rubio, the Florida Republican, who noted that he played football and has coached his sons’ youth teams. “You know what else comes with some risk? Life.”

Boom. Liberals everywhere declaring war on football tensed up like Rachel Maddow at a Trump rally when they heard this one, folks. Years of scientific research on the downsides of letting your kid play football before he is even potty trained can’t stand up to a statement like that one. Three sentences. 15 words. ALL FACTS (no printer).

Is it time to induct Lil Marco as a #FootballGuy for such statement?

It’s unfair to the dinner itself to be summed up by a few quotes taken by a New York Times reporter who came into the evening with an article already half written, but the speakers didn’t hold back from dropping some First Take worthy takes:

“If we lose football, we lose a lot in America,” said David Baker, the president of the Pro Football Hall of Fame, who was one of the keynote speakers. “I don’t know if America can survive. That’s why you’re so important to what we’re doing. That’s why America needs to huddle up.”

Huddle up, America!!!!!! That’s going to be my slogan for when I run for President. I had absolutely zero ambitions to run for President before reading this article, but after seeing a slogan like that I think I’m feeling a bit different.

“The biggest risk is the mental and emotional safety to those who are playing it,” said Trent Dilfer, the former N.F.L. quarterback. “The player safety concern is real, but it pales in comparison.”

“I don’t want to sound like President Trump, but the liberal media has got football in its cross hairs,” he said. Murphy added that said the sport’s leaders had to make the right decisions to make the game safer but added, “it is a mistake to focus solely on the risks associated with football and not to focus on the tremendous benefits.”

There’s a general tone to the article that is quite negative. You can’t blame Ken Belson for taking on that tone because of the revelations surrounding the dangers behind the sport that have come out in the past decade-plus. Belson probably had a word count so I don’t know if this was intentional or not, but he did not touch much on the benefits of football. There’s a sentiment behind every “parent who allows their kid to play football should be punished” opinion that football is just a sport where brain damage occurs and nothing is. It is often forgotten that football is a multi-billion dollar a year industry that keeps alive thousands of jobs (maybe even hundreds of thousands) throughout the country. Football, when taught correctly, also is a sport where character, teamwork, and discipline are developed. The impact that football has had on millions in this country cannot be understated. I wasn’t very good at football, but the friends I made on my high school football teams are something that I’ll have forever. I’m sure a lot who are reading this feel the same way.

That’s not to say that it’s time for every 5-year-old to strap on the pads and go play football. I agree with Jim Harbaugh advocating for every kid in America to play soccer until they are in 8th grade and then make a decision on football. There are more and more flag football leagues popping up for middle schoolers and below, which is another step in the right direction. The Ivy League made a move in 2016 to eliminate tackling in practice. Obviously, you need to teach kids how to tackle, but no high schooler should be practicing in full pads, 5-times a week, before a game. That’s silly.

Football is a dangerous sport. Anybody who denies that is foolish, but the sport itself still has upsides for every person who straps it up. We are seeing more and more moves towards reducing blows to the head (which lead to a higher likelihood of CTE than a few massive blows), which will reduce the danger associated with the sport. Those who decide to not play/not let their kids play are smart, but that doesn’t mean those who let their kids play are dumb.

Belson writes that USA Football is “fearful that football can turn into boxing, a once-popular sport that fell off the media map.” Belson did the reporting here, but I highly doubt that USA Football is that concerned.If anything, USA Football is concerned because most of their revenue comes from youth football, which isn’t played as much as it once was because many are realizing playing football from 6-years-old on is not safe, not because it’s becoming boxing.

Saying football is going to go the way of boxing is, in my opinion, an incredibly lazy take. There is no comparison. Football is a team sport, something that millions play and watch. Sure, big fights back in the 20th century drew millions of viewers, but how many big fights happened, no more than 20 times a year? Even at boxing’s pinnacle, the number of viewers it got on a yearly basis paled in comparison to football. It may have been more popular (I doubt it), but football had more just due to having 100’s of regular season games in both college and NFL. Football has always been played more than boxing just because it’s easier to participate. It may have been different in the early/mid-20th century, but not many high schools/colleges have ever had boxing teams. Even if they did, a college boxing team wouldn’t have 50-100 players on it. Football is an avenue for many to achieve a better life. Critics often look at football as an “if you didn’t make millions in the NFL, it was a failure” type of sport, which is the furthest thing from the truth. Thousands use football to get into college when they are in economic situations where they wouldn’t have attended college otherwise.

Football isn’t boxing, nor will it ever be. Just because the sport is changing doesn’t mean the sport is dying.