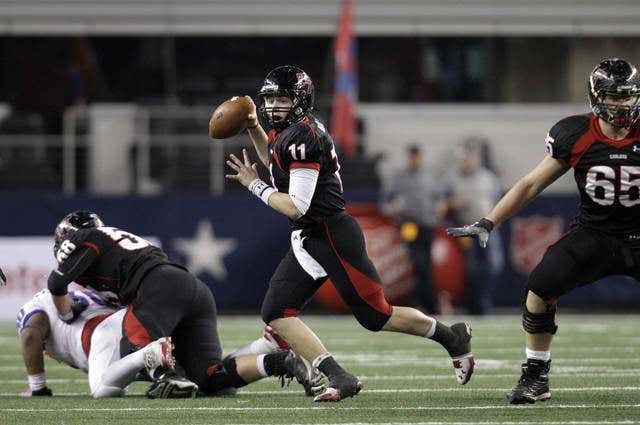 Some backstory for ya. Orlando Brown, Oklahoma’s former LT, had a less than stellar combine performance:

On Monday, Texas QB Sam Ehlinger tweeted out about one of his teammates offseason #GAINZ. In the same tweet, Ehlinger threw a little shade at Orlando Brown:

With all of this being said, I’m going to put the video of Baker Mayfield’s response to the question about Orlando Brown again:

“He’s never beaten Lake Travis and he also hasn’t beaten OU, so we’ll leave at that.”

Baker Mayfield is at a level of trash talking that you and I can’t understand. This was so flawlessly executed it almost seemed stage. As Meek Mill says “there’s levels to this shit.” Baker is at the top.

The mention of the Red River Rivalry was good, but what really made this such a phenomenal moment was the mention of Sam Ehlinger never beating his high school rival, which happens to be the same school Baker went to. If you want to get at a Texas boy just bring up his high school football failures. Ehlinger could beat Oklahoma this year and next on his way to a national championship, but he never beat Lake Travis. It will always eat at him. Ehlinger could be getting inducted into the football hall of fame and Baker could show up with a sign that says “Yeah, but you never beat Lake Travis!” and Mr. Ehlinger would be triggered. He can tell us “I don’t care, really, I don’t!” all he wants, but we all know he does. It’s the girl that got away. The girl you could never win over. Baker knows this. You can see it in his little smirk: 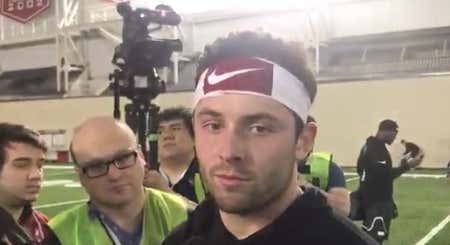 How does a kid who goes to college in the northeast know this? Friday Night Light’s (both movie and TV show) of course. That’s where I’ve learned everything.

Another underrated aspect of this clip is that Baker does this while defending one of his offensive linemen. I don’t know why, but a QB defending his OL always gets me juiced up.

P.s. Here is Baker’s highlights from High School. Just a reminder that Texas didn’t offer him.