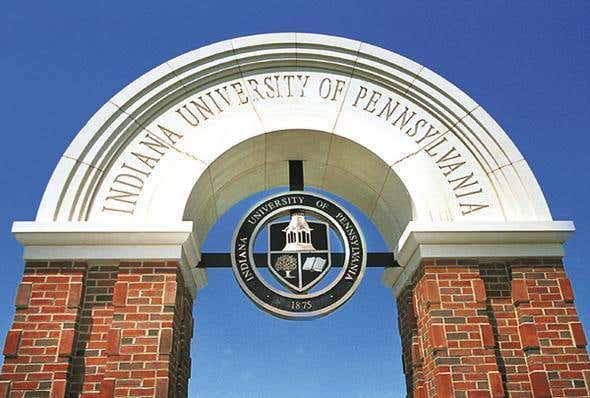 Campus Reform-A student at Indiana University of Pennsylvania has been barred from attending a religious studies class required for graduation after pointing out that there are only two genders.

Let’s start with the location of this alleged incident. I’ve never understood schools like Indiana University of Pennsylvania. I guess the school is in Indiana County, Pennsylvania, but there should be a law against naming a school with one of the 50 states while it’s not located in that state. It’s way too confusing. For example, Washington University in St. Louis shouldn’t exist. It’s a great school, but it’s time to rename it.

So, we are starting this whole story off on a bad note. Another reason to force Indiana University of Pennsylvania (IUP) to rename themselves is they are a different school than IUPUI. Indiana Unversity-Purdue University Indianapolis is yet another school name that gives me a headache. Add in IUPUFW and I have a migraine.

According to Ingle, the class was forced to watch a Ted-Talk on February 28 featuring Paula Stone, a transgender woman, who gave examples of “mansplaining,” “male privilege,” and systematic sexism. Following the video, Ingle wrote that the instructor “opened the floor to WOMEN ONLY. Barring men from speaking until the women in the class have had their chance to speak.”

Quite ironic that only women were allowed to talk about male privilege. I guess the guys in the class didn’t have the privilege to start off the conversation.

After some time had elapsed, Ingle stated he “took this opportunity to point out the official view of biologists who claim there are only two biological genders,” and refuted the “gender wage gap,” after which class resumed as normal.

Seems fair. That’s what college is about, right? Starting a conversation, hearing others opinions and respecting them. The safe space is full of differing opinions, none of which are silenced, ever! Oh, no?

“The floor was opened, and not a single woman spoke. Thirty seconds or so passed and still no woman had spoken. So, I decided it was permissible for me to enter the conversation, especially because I felt the conversation itself was completely inappropriate in its structure,” Ingle told Campus Reform. “I objected to the use of the anecdotal accounts of one woman’s experience to begin a discussion in which they were considered reality. It was during my objection that Dr. Downie attempted to silence me because I am not a woman.” 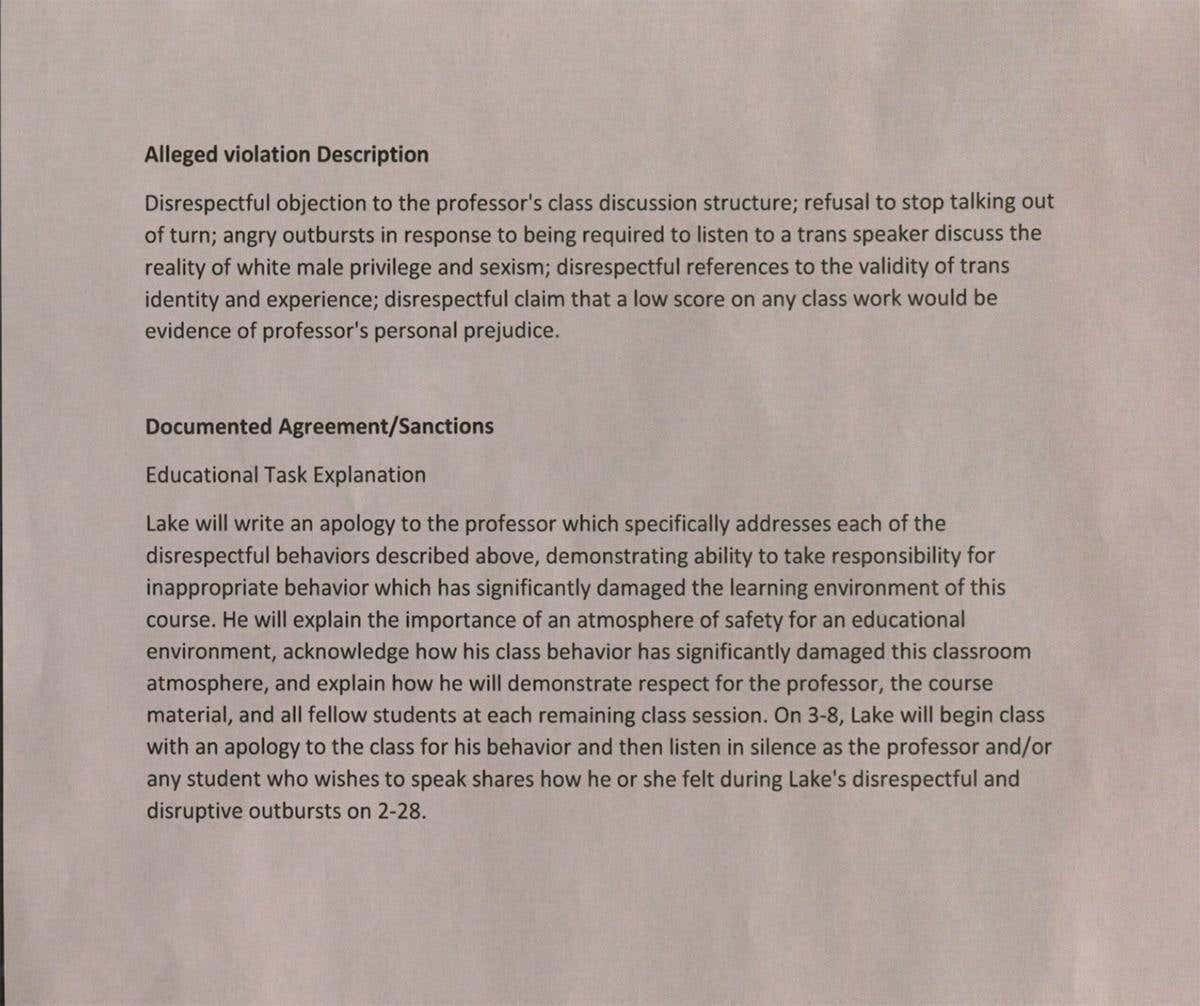 There’s no video of the said incident, but “disrespectful objection to the professor’s class discussion structure; refusal to stop talking out of turn; angry outbursts” isn’t the best look for Ingle. A lot of these instances go the same way, the student insists they are the innocent bystander, the teacher says the opposite, and when the truth comes out it’s somewhere in the middle. It still seems like Ingle’s claim that there are only two genders, while in a CHRISTIANITY class, may result in him not graduating: 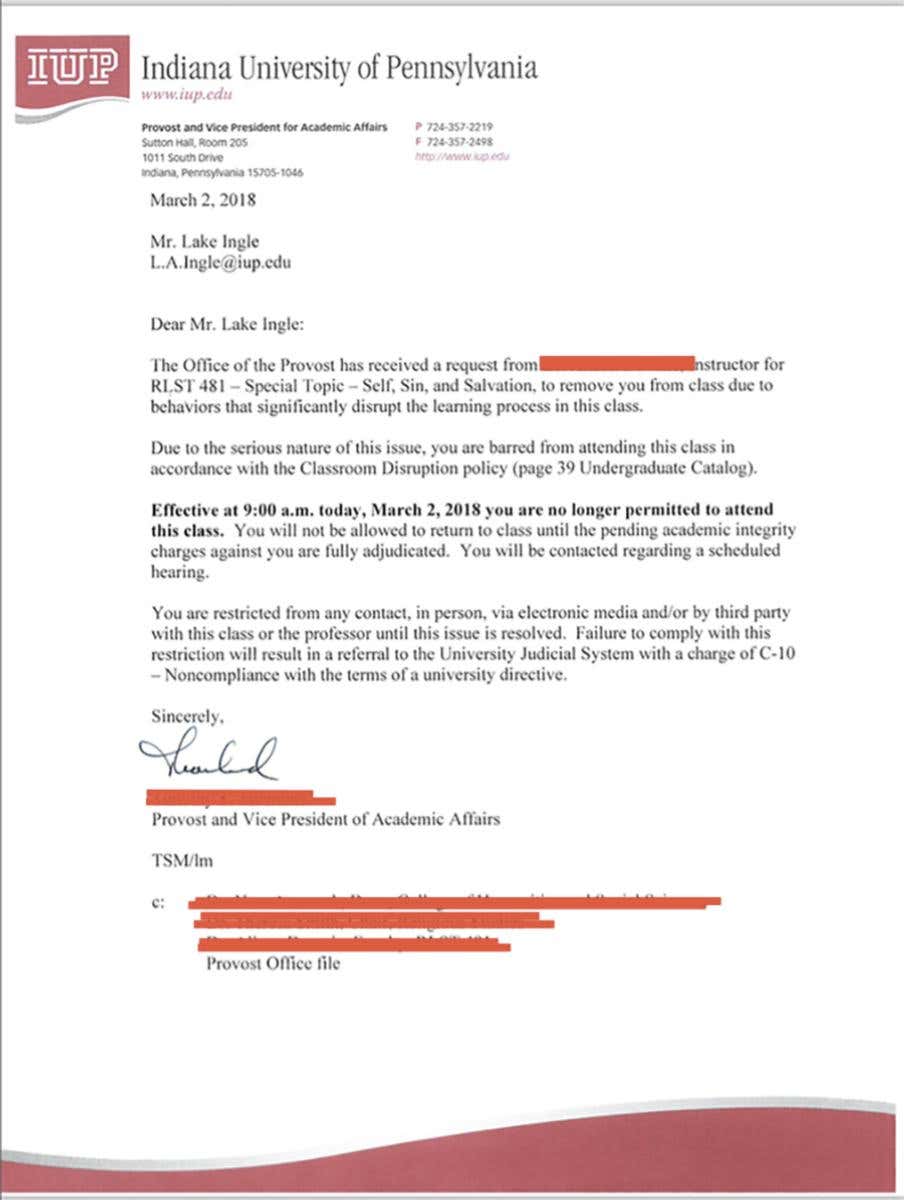 Fox News-Downie and Ingle had an AIB hearing Friday, with a ruling set for March 19.

If the board rules against Ingle, he won’t graduate in May. Regardless, he plans on someday becoming a professor.

It’s a real shame that Ingle didn’t know about the latest advances in sciences that says there are 76 genders, “even though there are probably more like millions.”

Alison Downie is the professor in the alleged incident:

We’ll see if Ingle’s male privilege prevails on Monday at Indiana University of Pennsylvania, which has nothing to do with Indiana University and isn’t in the state of Indiana. It almost makes sense that this incident occurred at a college with such a confusing name.