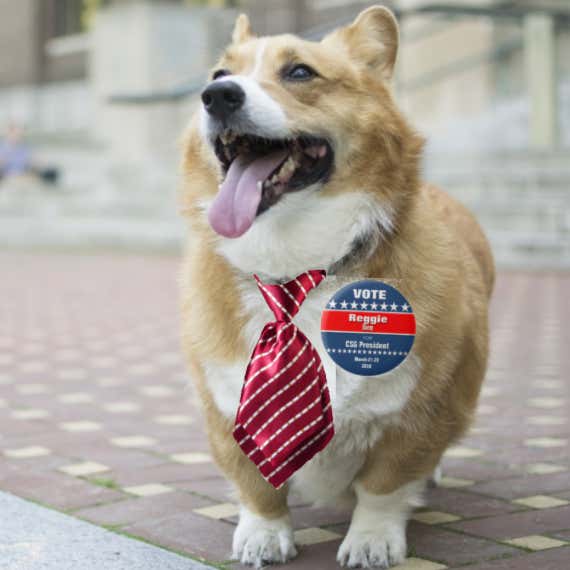 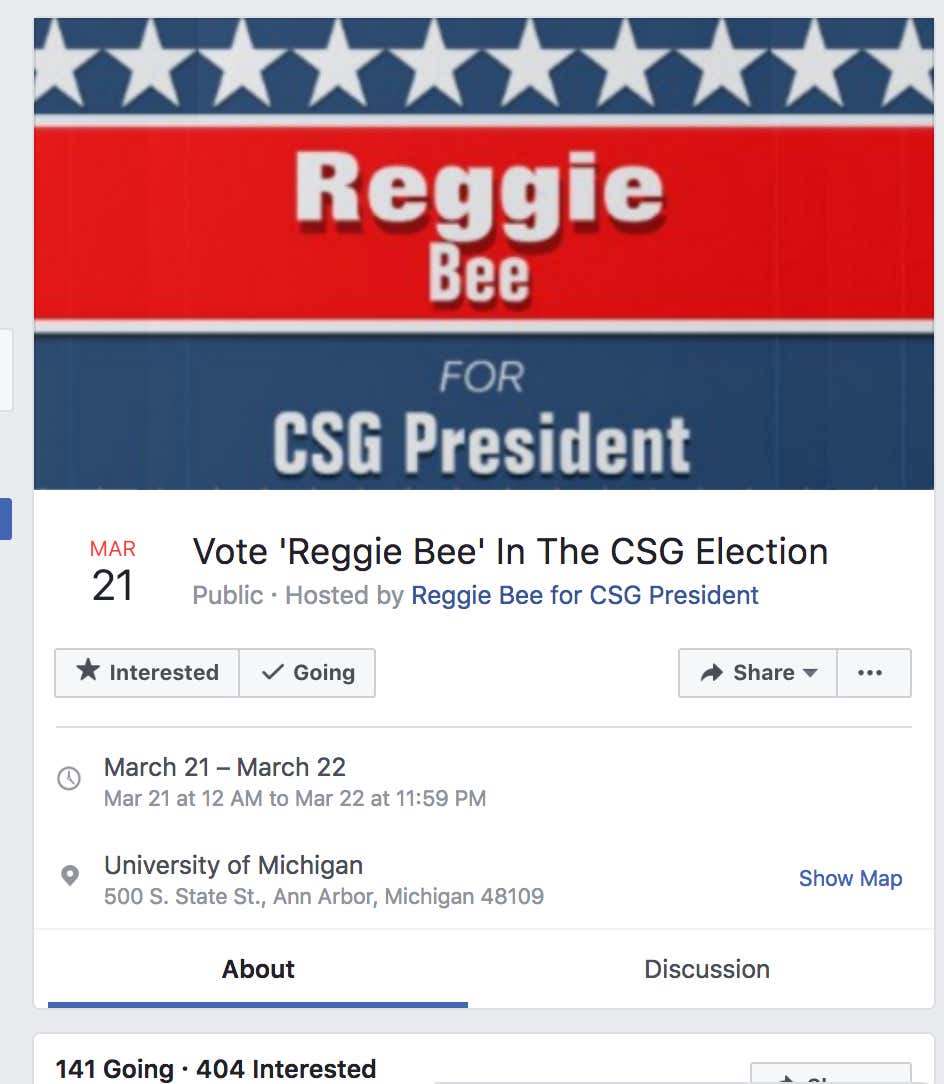 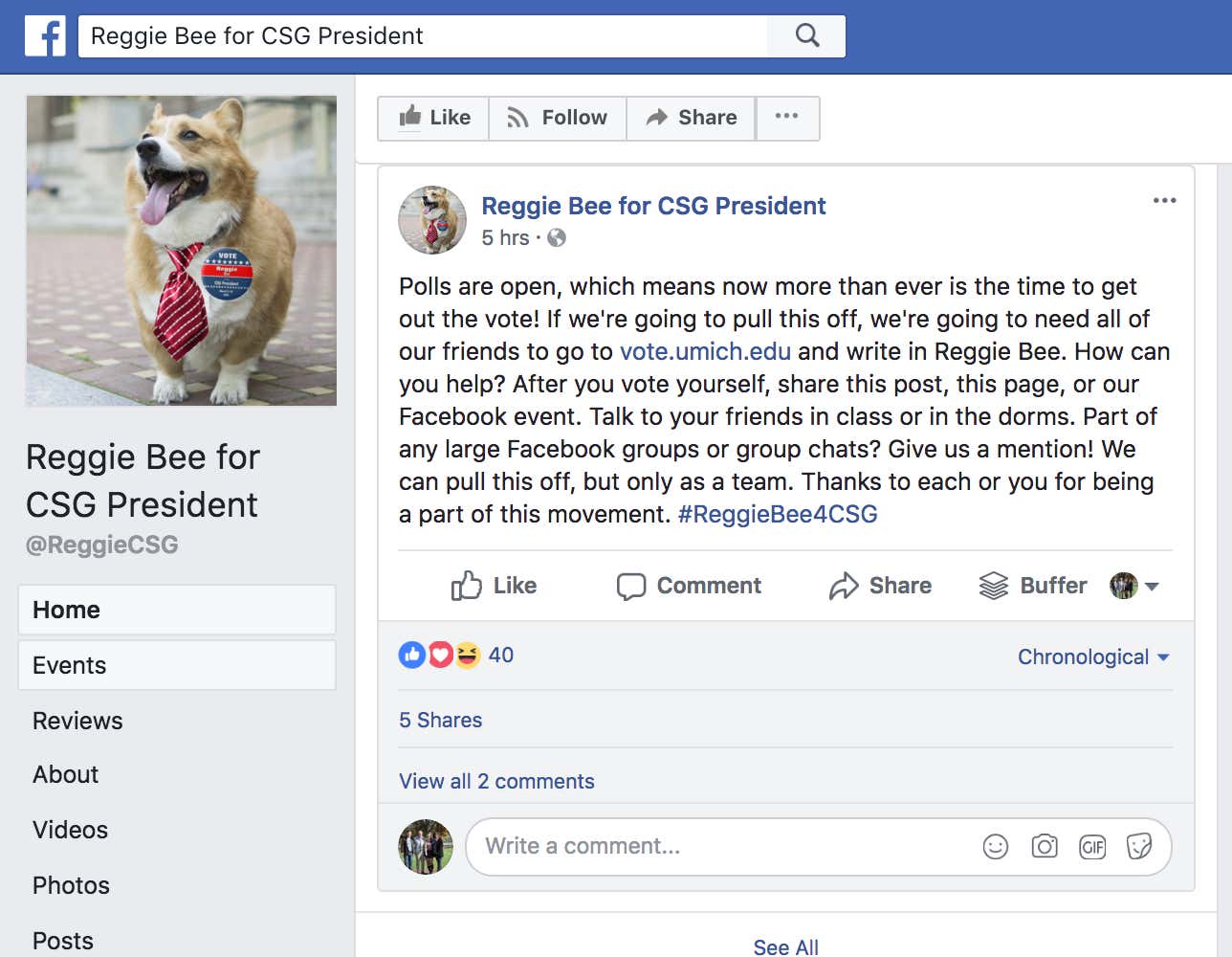 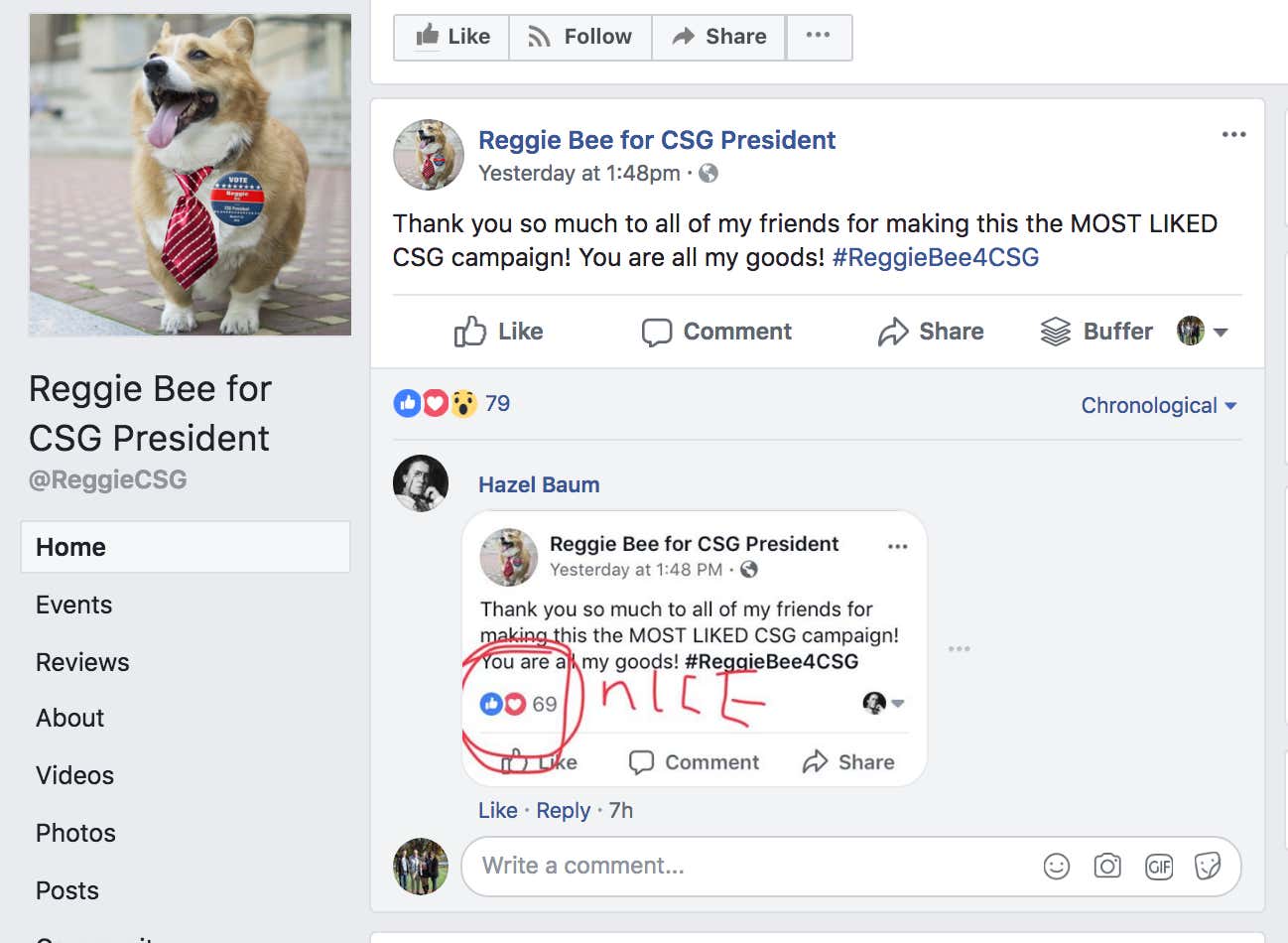 Dogs are hot in the STREETS right now. The UMBC Retrievers upsetting Virginia shot dogs stocks through the roof. Students at Michigan are trying to take advantage of this by electing a corgi, which I can’t blame them for.

Detroit Free Press-With the CSG Election taking place today and tomorrow at U-M in Ann Arbor, several hundred students have gotten behind a Facebook campaign to elect Reggie Bee — a trained therapy dog who’s gained popularity among students and even has his own Facebook page —  as CSG President.

No, Reggie Bee is not actually listed on the ballot. But the “campaign” asks students to write in “Reggie Bee” at the bottom of the ballot.

“The time has come to make our dreams of a more canine student government a reality,” the Facebook Event says.

CSG President 3) Reggie the Campus Corgi is now your President

Is this Michigan’s first #MichiganDog? Reggie Bee is described as “the Campus Corgi” and a “trained therapy dog.” Did somebody say therapy dog?!?! NOBODY TELL BILL SIMMONS!

I shared a class once with a student government senator who showed up to 75% of classes in a suit. The kid was a nice guy and I got to talking to him one day and asked him about his outfit selections. He told me that he doesn’t like wearing suits, but he needs to take a certain reputation and respect from the student body if he one day wants to be the president of student government. There is undoubtedly a similar student at Michigan right now who is eating himself ALIVE that a damn corgi is getting more votes than he will.

I don’t think I’ve ever met a normal student government member in college. Last year at Fordham, there was a fairly popular kid running for president. He stopped by my dorm room once or twice and gave me two free donuts. He even told a good joke. I was going to vote for him, but he didn’t end up winning because he succumbed to what destroys a lot of politicians: a sex scandal. This kid apparently set a new years resolution for himself to go “52 for 52.” He wanted to have a new sex partner every week of the year. An ambitious goal for a man who I wouldn’t categorize as a looker. 5 weeks into his conquest he ended up sleeping with a girl who would later EXPOSE him. During a debate the night before the election, the girl showed up and asked him a question about his “52 for 52″ conquest and that was the end of his presidential run. Women man!

Word is he ended up going 7 weeks without failing. Impressive.

P.s.s. Hot take: corgis are overrated, fat and ugly. If you are a true dog lover you will own a real dogs dog like a lab or a golden retriever.