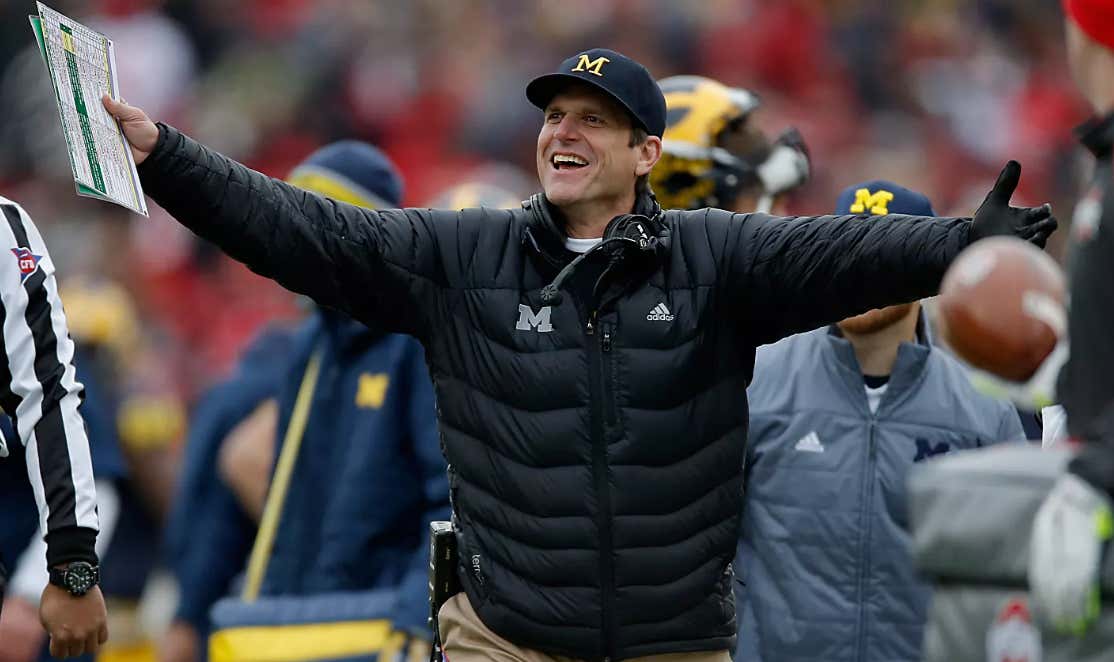 What a story of emotional evolution out of Ann Arbor!

Land Of 10-According to Michigan running back Karan Higdon and defensive end Chase Winovich, Harbaugh has a new warm personality that even involves giving his players hugs.

“He’s just more personable. He wants a hug sometimes,” Higdon said of Harbaugh. “Sometimes you’ve got to give him a hug. The guy wants a hug.”

That’s what it’s all about. Wake up! It’s 2018, not 1965, football guys are showing emotion. Just like us humans have evolved, football guys are evolving too. Yes, I treat the Jim Harbaugh’s and Ed Orgeron’s of the world as a different species.

As the famous Barney song goes, “with a great big hug and a kiss from me to you”

“After the bowl game we had a sour taste in our mouth; I did, he did, everybody in this facility did,” Higdon said. “He was open. ‘What do we need to do? What can I do?’ How often do you see that from a coach, asking of his players? That’s stronger than anything.

Well, I guess that’s what blowing a two-touchdown lead against South Carolina will do to ya. Turn you soft.

“He takes criticism, just like we do, if not more, and he’s just trying to add more. It’s like, ‘If you see me out there, give me a hug.’ Not out on the field, but in the hallway.”

That’s got to be the equation for a very awkward situation for countless Michigan players. I’m sure the football facility in Michigan has long hallways, and there is nothing worse than seeing someone you know at the opposite end of a long hallway walking towards ya. What are you supposed to do for those 8 seconds as you approach each other? Keep your head down? At what point do you say hi? Look each other in the eyes? Has to be worse with your boss approaching you and he expects a hug on top of it? Sheesh!!!

What does all this mean for Michigan as a football team?! We’ll see. I am excited for a potential Michigan loss where they are out duelled physically and a hot take artist on one of our favorite network TV stations hits us with a “has Harbaugh gotten soft?” take.

The answer to that take? It’s a no. A hard no. All I see is Jim Harbaugh taking a book out of Tony’s book: