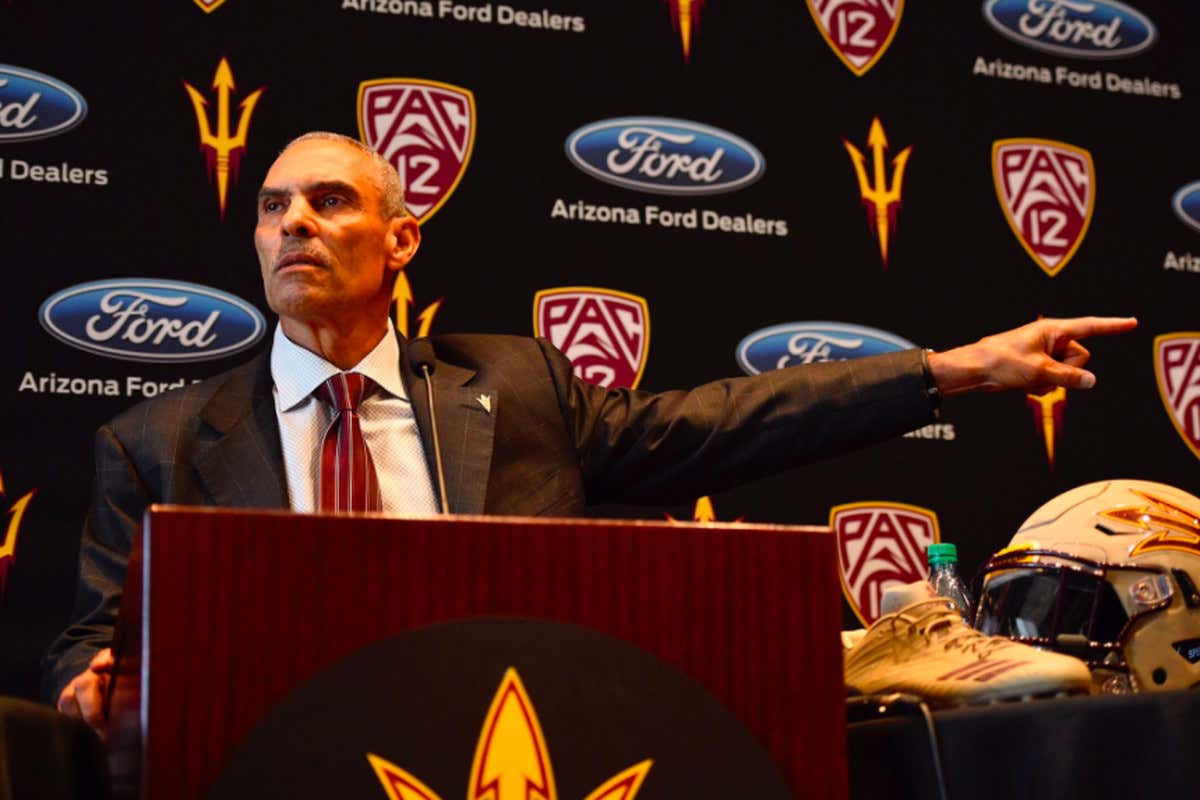 The Herm Edwards experience at Arizona State has been quite the journey and the man hasn’t even coached his first game. We are only a few months into Herm running ASU more like an “NFL front office” than a college football program, but have had our fair share of great moments. With crootin season over, Herm is now focused on the team he is going to have out there come September and let me tell ya, he isn’t backing down from his “NFL front office” approach:

Arizona Central-Edwards told his players before they began the fourth week of spring practice that cuts likely are coming, including to some with scholarships if performance dictates after the spring game April 13.

Edwards, an NFL head coach for eight years, then repeated that message to the media after practice, saying any scholarship players who are cut would retain their financial aid if they opt to stay at ASU as a student.

“There was a message sent, and the message was very clear that we’re in the process of evaluating players between now and next week,” Edwards said/

“You’re going to find whether you continue to be part of it or not. I told them that when I first took the job.

I expected nothing less out of Herm.

“I told some guys who continue to stay in the training room, you’ve got no tape. I can’t grade you if you’re not on tape. All of a sudden, guys got well. It’s amazing. Sometimes these players think with 85 scholarships, I’m good. You’re not good. You’ve earned a scholarship because of your ability to be a student-athlete. It’s a combination of both. When you don’t meet that standard, there’s consequences. Consequences are sometimes tough. If I don’t apply those consequences, then I’m not doing my job as head coach.”

Nothing better than football coaches discussing players in the training room. If you are in the training room as football player your leg better be falling off or you are going to hear about it from your coach. As the age old saying goes, are you hurt or are you injured? To Herm, everyone in the training room is hurt, not injured. Sometimes you’ve got to find a way to motivate the players to get up off their ass and for master motivator Herm his tactic is potentially cutting them off the team. Should go over real well with the croots.

I don’t hate this move by Herm. Motivating through fear isn’t my cup of tea, but we’ve seen it work in the past with other football coaches. I’m just concerned that his brain is still in the NFL but his body is in Tempe. It seems he knows he can keep close to 100 players, BUT are we sure he isn’t trying to cut ASU down to 53 players (the size of an NFL roster)?

Edwards said having fewer players short term due to cuts would not hurt because, typically, 45 players are used in a game.

Herm’s madness is either going to win him the Pac-12 or get him fired within the year. Hopefully, by the end of the year he’ll know the teams mascot:

I’m cheering for ASU this upcoming season, because I don’t want Herm Edwards to ever leave my side. YOU PLAY TO WIN THE GAME!!!

P.s. it is worth noting that Herm will not remove their scholarship’s allotted financial aid:

Edwards, an NFL head coach for eight years, then repeated that message to the media after practice, saying any scholarship players who are cut would retain their financial aid if they opt to stay at ASU as a student.