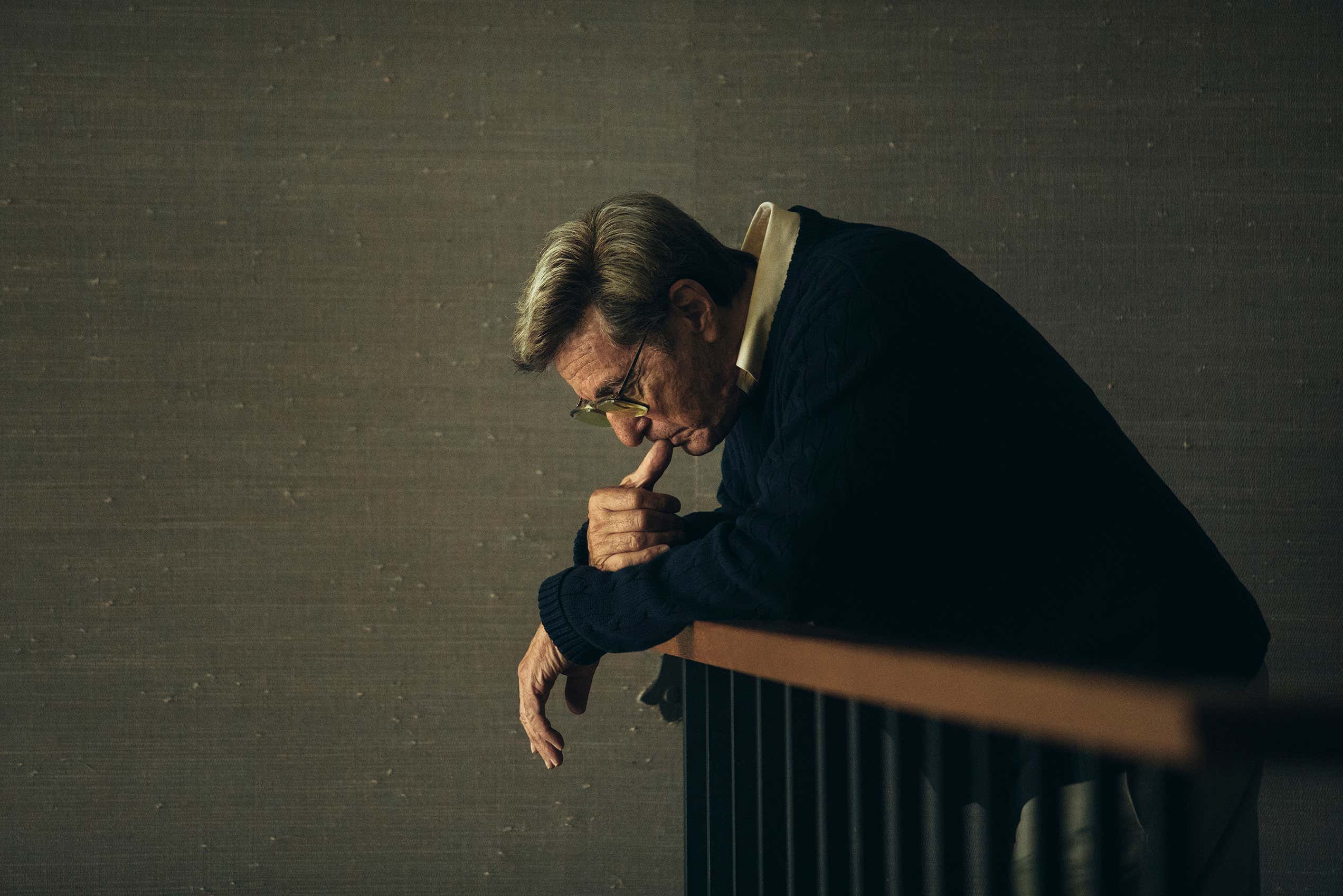 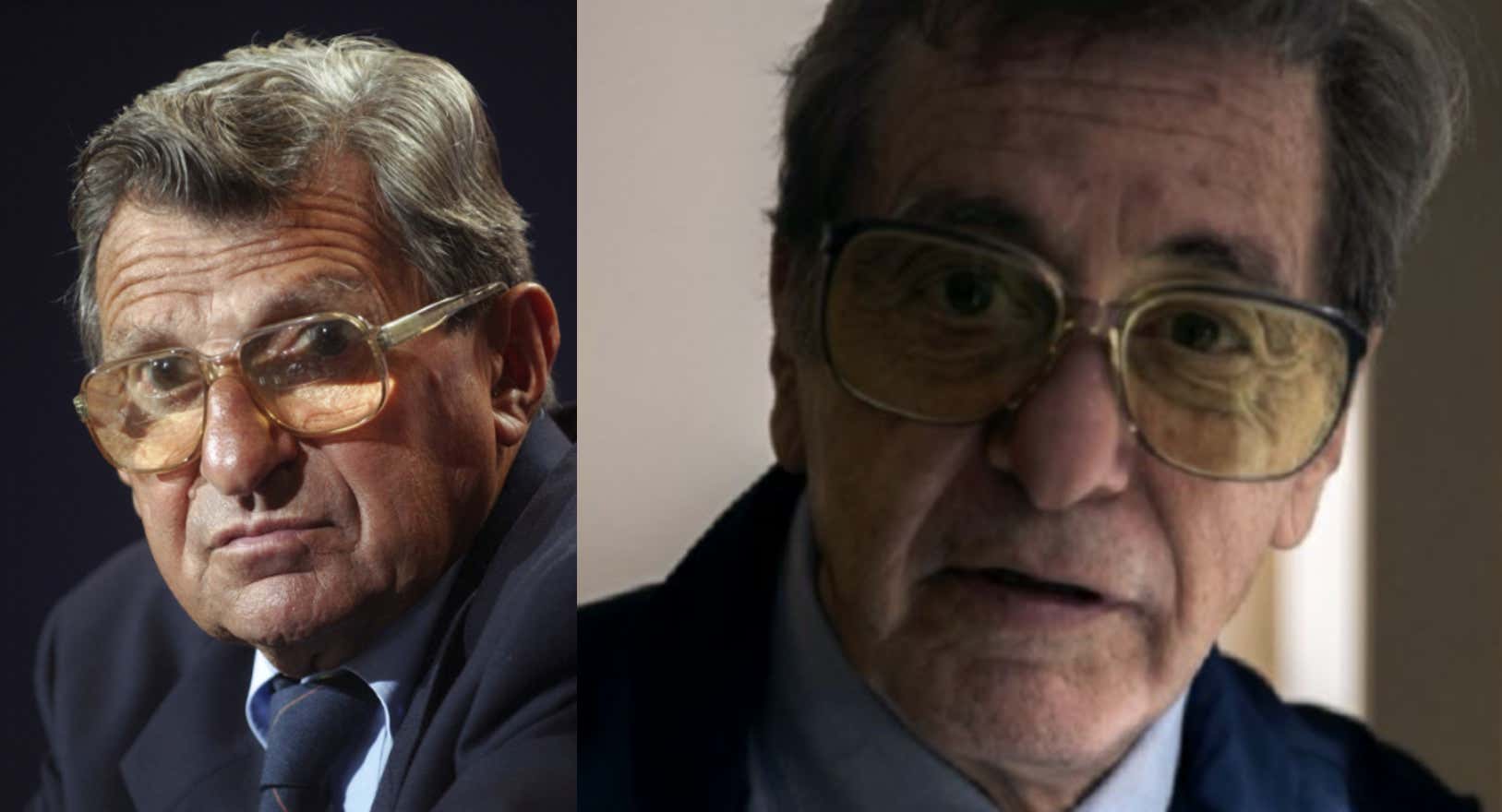 The film, which will be re-aired on HBO in the upcoming weeks and is available on HBO Now/Go to be watched any time, was just under two hours in length. To do the entire scandal justice, there would have to be a Ken Burns-like documentary series. Two hours was never going to be long enough, so there were obvious shortcomings. I’m no movie expert nor am I one when it comes to the Sandusky scandal, but with all that being said, I highly recommend you watch.

Pacino did a great job as Joe Paterno. I am a big Pacino fan, so to see what he did in this role was no shock. Overall, I liked the movie as it took the viewer on the roller coaster with Paterno and his family from his record-breaking 409th win as a head coach to being fired in a matter of days. Some saw centering the movie on Paterno as problematic as it took the story off of the victims and Sandusky. That assessment is obviously fair, but the movie being named “Paterno” should have alerted viewers where the focus was going to be.

One of the odd inconsistencies from the movie was with Paterno’s famous statue. The since taken down statue had a smiling Paterno holding up one finger, leading players onto the field: 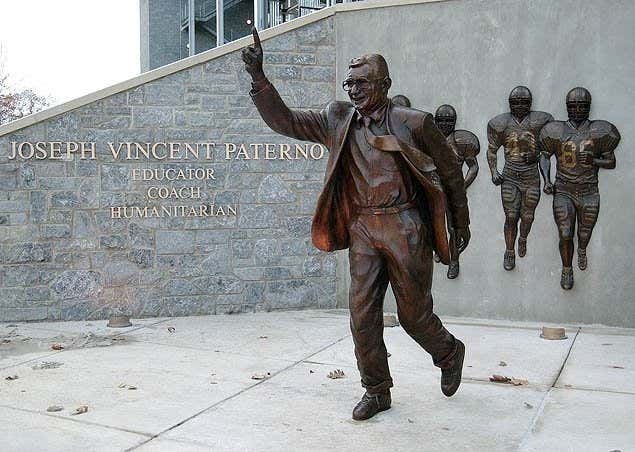 In the movie, Paterno’s shoulders are slouched while his hands are in his pocket: 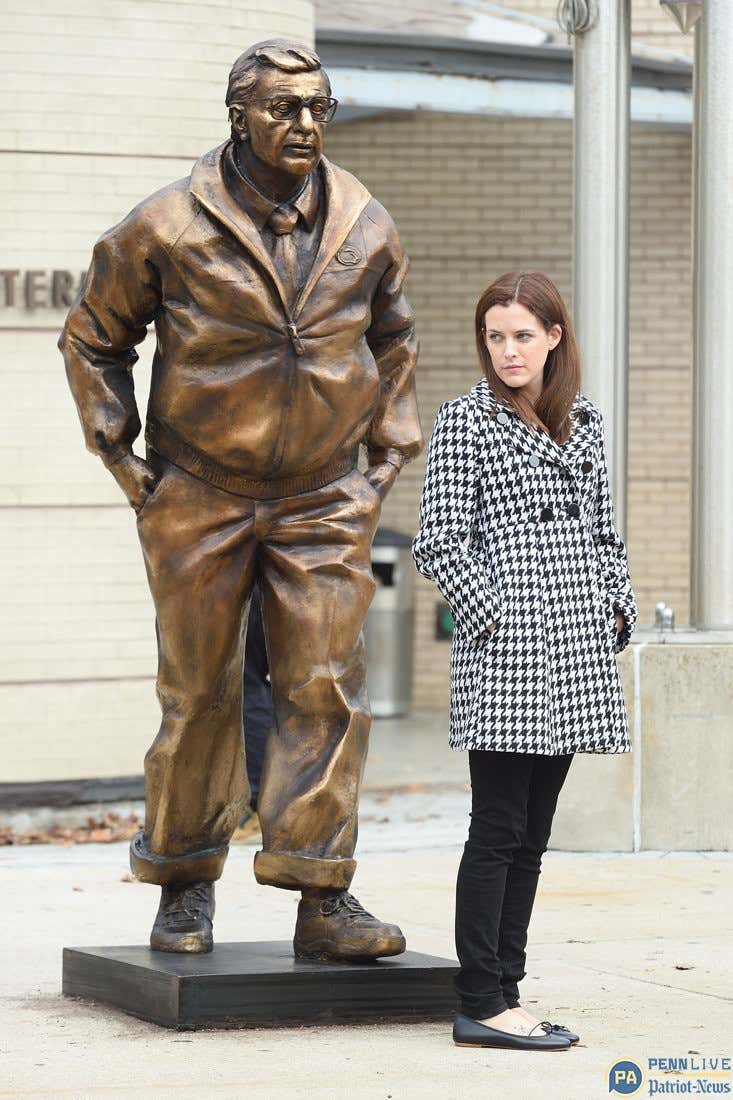 (H/t to Penn Live for photo)

An iconic part of the film was the shots of Penn State students watching as the news of Paterno’s firing came out. The students rushed the streets to riot: 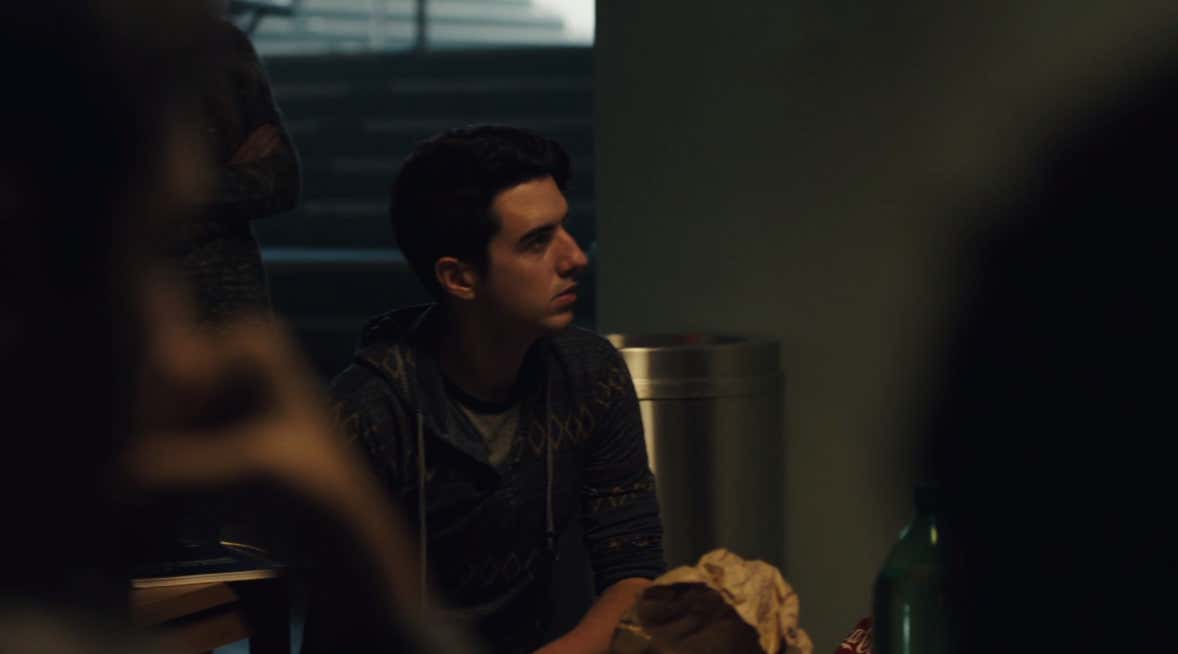 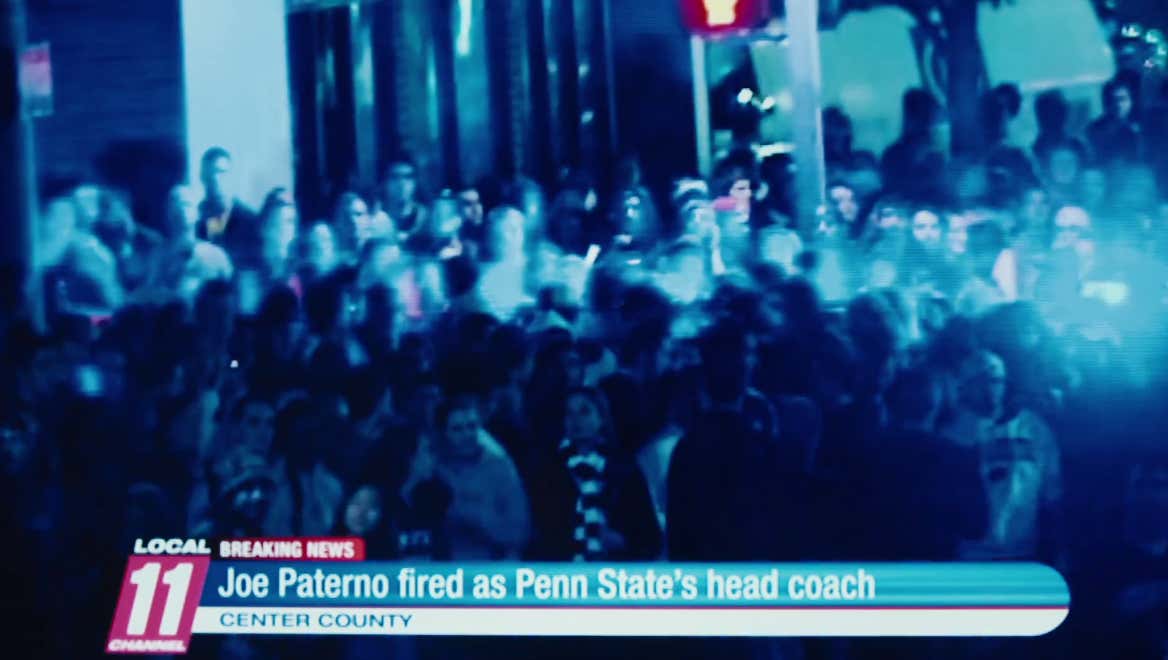 This is not revisionist history, as it did happen:

There was a moment in the film where the journalist, Sara Ganim (played by Riley Keough), asked one of the students for a comment. The student went on to defend the victims, not Paterno. This was one of the only such occurrences of a Penn State student being portrayed in a positive light during the film. This is a shame because the real story involves the countless number of Penn State students holding a candlelight vigil for the sexual abuse victims just two nights later:

There was, of course, the infamous scene of Paterno speaking to the crowd that surrounded his house on the night of is firing. 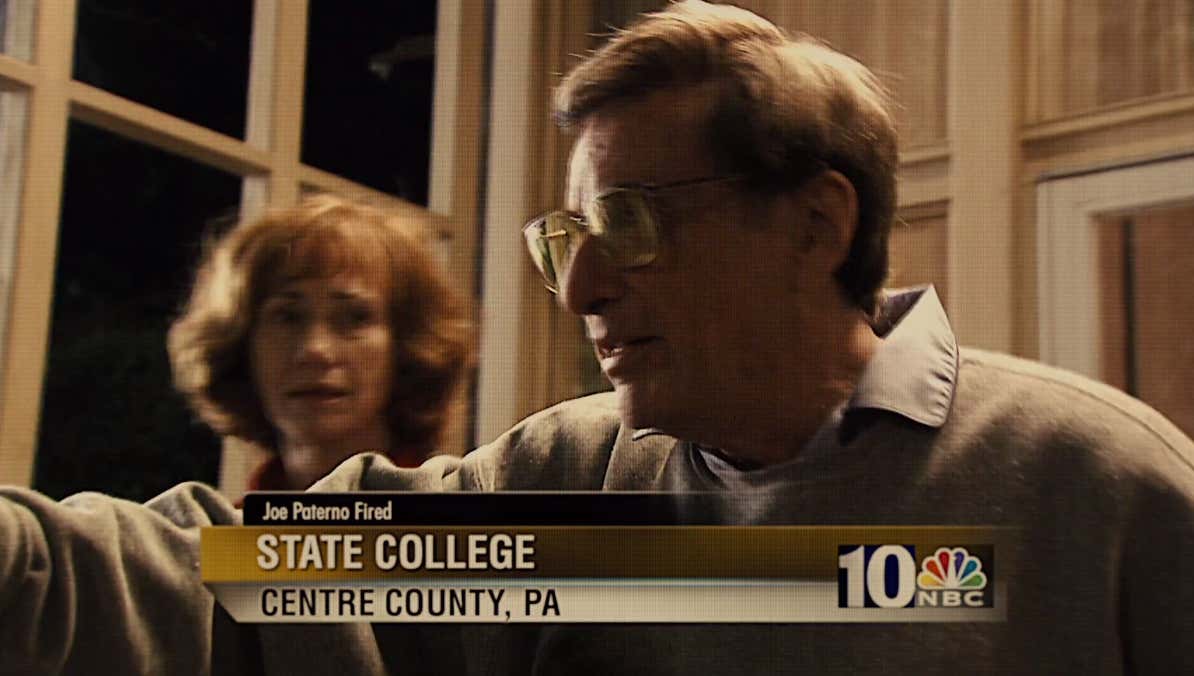 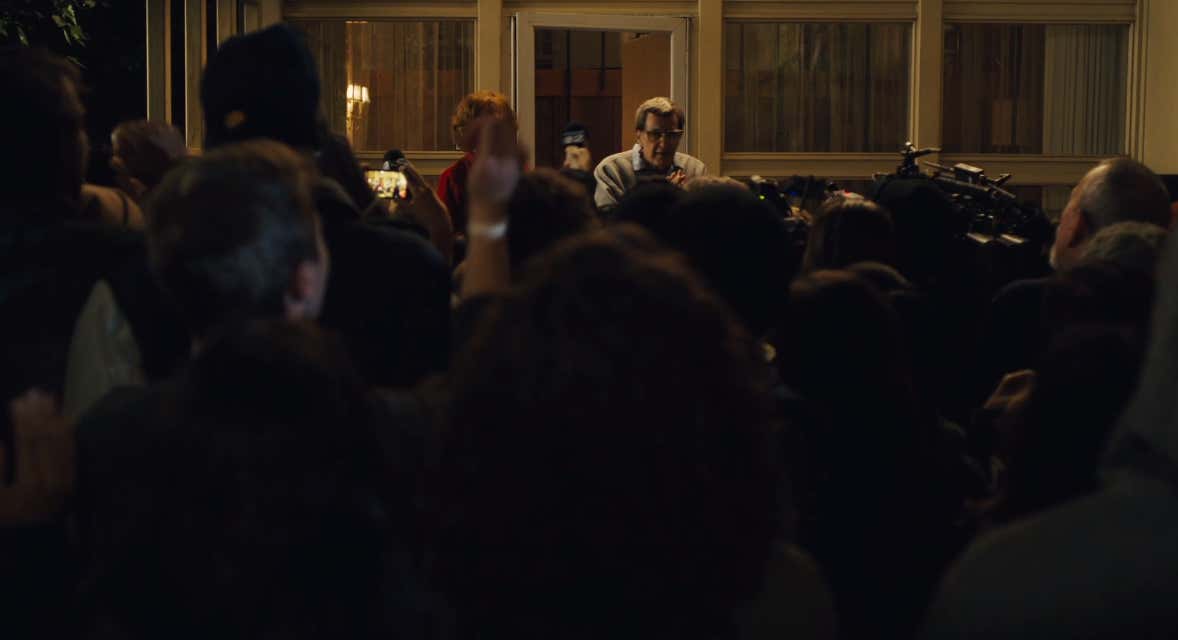 I would say they did a pretty good job with this. They sort of combined what he said the night before his firing and the night of, but I didn’t have that much of a problem with that.

The game against Nebraska for Penn State in 2011 was given a bit of justice. I was a young, dumb high schooler at the time, but I do remember how bizarre the timing of that game truly was. The viewer followed Paterno during it, but the crowd shots showed the support the ex-Penn State coach had and, weirdly, still does: 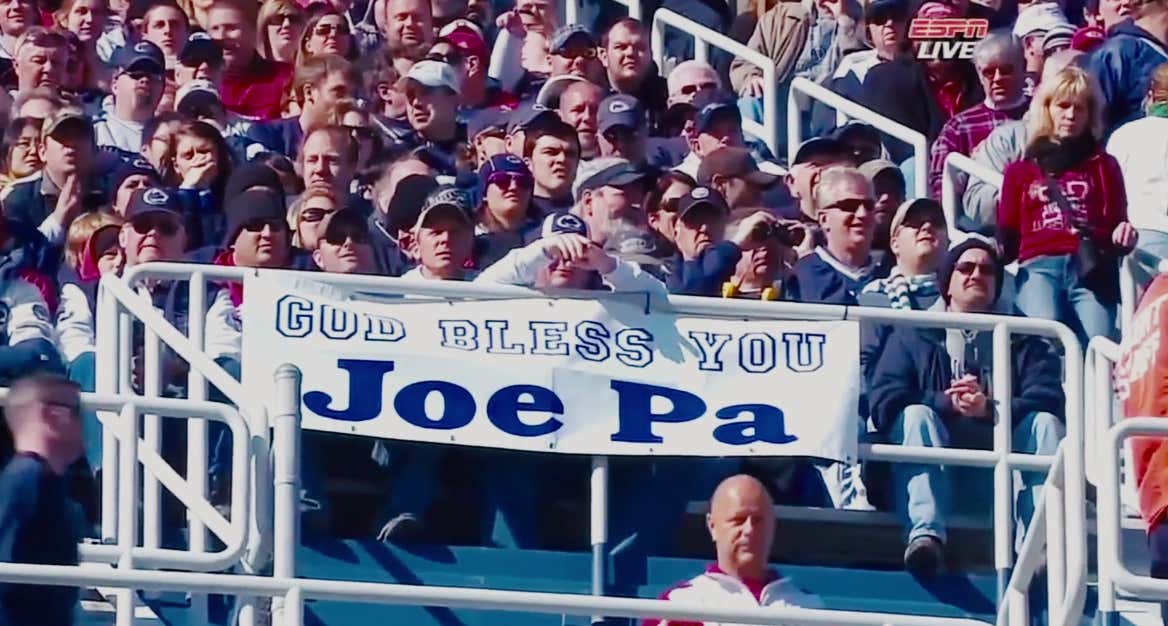 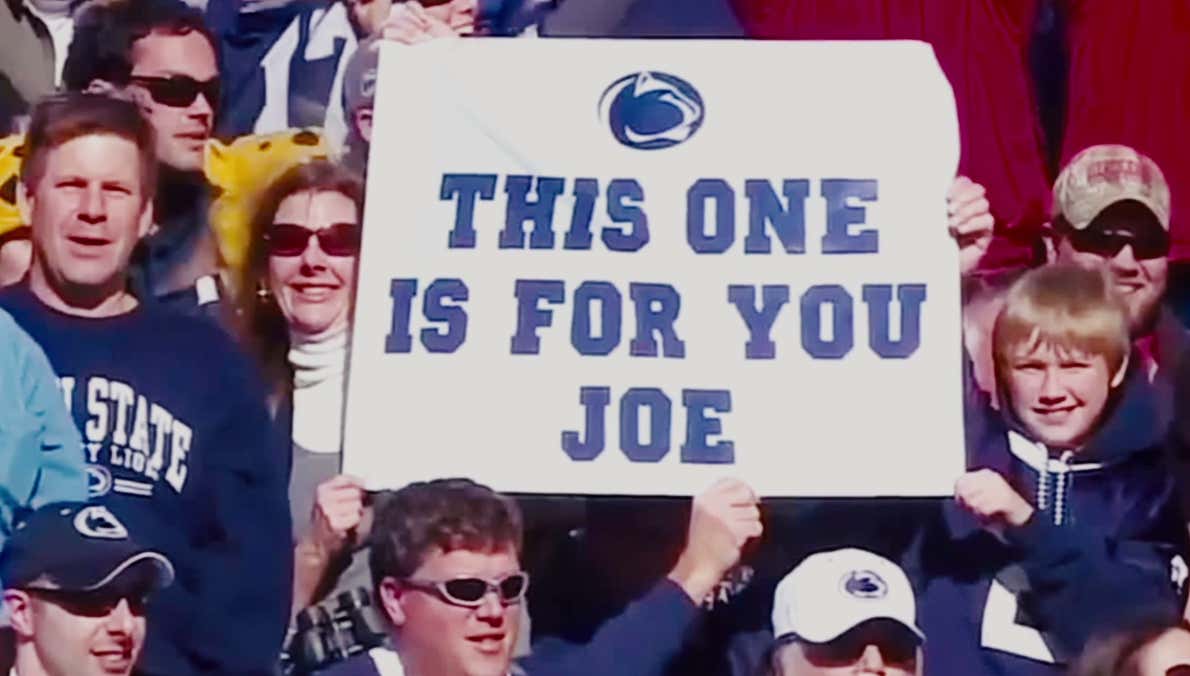 The last scene was truly something as the viewer watches a nightmare Paterno has which he eventually awakens from yelling. The scene quickly switches to Paterno’s cancer diagnosis after completing a CT scan, the setting where the movie began.

The movie ended with a cliffhanger as Ganim takes a call at her desk. I hesitate to call it a cliffhanger because I assume there won’t be a part two to this movie, but the call references an anonymous tip from 1976 that came from someone who allegedly was abused by Sandusky:

It came in the form of a single line in a court order on a related insurance coverage case involving Penn State, and its full ramifications can’t immediately be gauged.

But that line was eye-popping in itself.

The line in question states that one of Penn State’s insurers has claimed “in 1976, a child allegedly reported to PSU’s Head Coach Joseph Paterno that he (the child) was sexually molested by Sandusky.”

This came out from an insurance case, so it wasn’t subject to any criminal testimony. It’s interesting they included this to be the final scene of the movie because the claim was never thoroughly investigated.

“Paterno” didn’t really have a villain or a hero. There is still a weird fetish within the Penn State community that wants to paint Joe Paterno as a helpless old man, too focused on football to notice anything else who died a terrible death because of an unfair accusation. I don’t agree with that assessment, but at points, the movie did seem like it wanted the viewer to sympathize with Joe Pa. That angle left me feeling a bit uneasy.

Overall, I very much liked “Paterno.” I highly recommend you watch it if you can. It’s a great reminder of a scandal like the Sandusky one can be covered up on a large scale. What happened at Penn State isn’t confined to just Happy Valley. Look at Michigan State. Evil reaks everywhere and can happen to a school like Notre Dame just as easy as it did at Penn State.