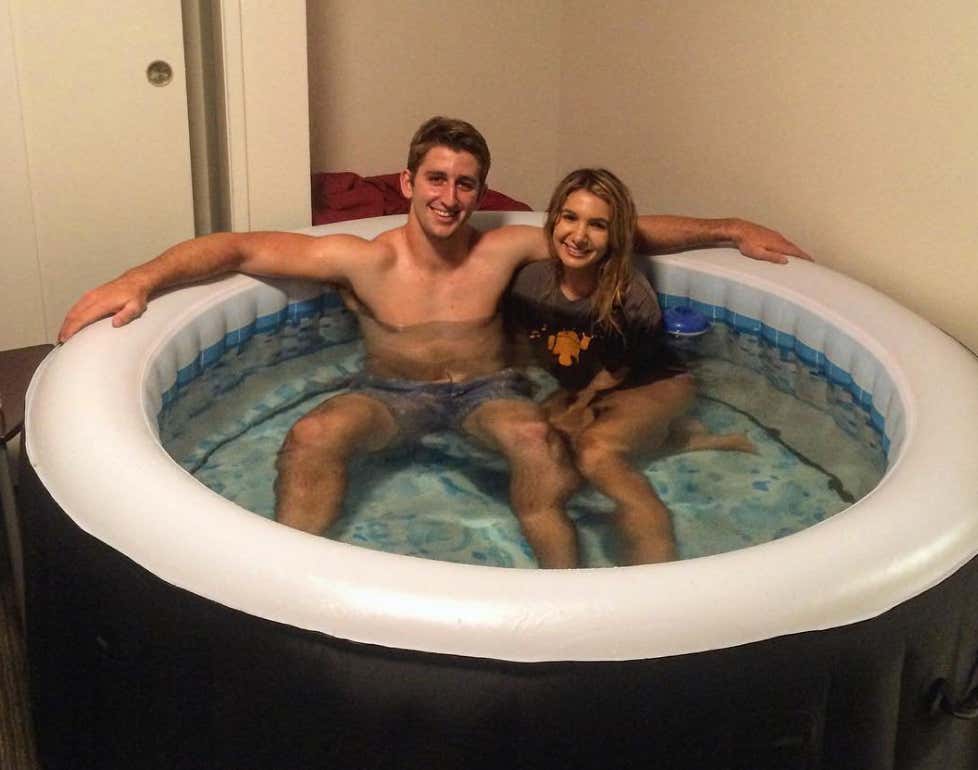 It’s officially NFL draft season. The time of the year when NFL bloggers are dusting off their Mock Draft 7.3.2 and capital J’s do gods work by investigating every move a bunch of 18-22-year-olds took in their college career, both on and off the field (get ready for: “Thank God what I did in college wasn’t exposed. I’d be screwed.” tweets. SHut up, nerd. Nobody cares what you did at your Journalism school parties).

Josh Rosen has a case for being under the microscope the most in the 2018 draft class (Baker Mayfield barely beat him out for this honor). From being the great-great-great grandson of the founder of the Wharton School to not liking football enough because he was born into a rich family to caring a bit too much about the environment, it seems as if everytime the UCLA quarterback is brought up, it’s not about the player he is on the field.

One of the many mini-controversies Josh Rosen was involved in during his time at UCLA was the infamous hot tub incident:

In a profile done by ESPN, Josh Rosen finally opened up a bit about the back story behind the hot tub in his dorm:

[Pauses] The social media post about Under Armour was pretty sh—y, and the hot tub.

What was the mistake with the tub? Having an inflatable tub in your room, hosting a woman in the tub or allowing a photo to hit Instagram?

Hosting a woman in the tub. Again, it’s about tailoring the message — I don’t want to get political, but the thing I regret the most about the Trump thing is using the F-word. I’m a role model for kids. I regret the F-word.

Now the hot tub: I accidentally shipped it to my mom’s house. My mom thought it was hilarious and drove it up for me. I thought it was hilarious because she did. But I shouldn’t have had a woman in there. I enjoy making people laugh, but what I find funny and put online, others might misconstrue and find jerkish. I need to refine my message but not lose who I am.

Let’s start with his Mom. What an absolute legend. A huge internet hat tip to Mrs. Rosen. Mothers have long been the absolute best. They carry you around for 9 months and then (hopefully) care for you for the next two or so decades of their life. Without them, we would literally not exist. All of that would be enough, but Mrs. Rosen took it to the next level. In a situation where some elders would be a buzz kill, Mrs. Rosen not only supported the cause but went beyond what was expected of her. Shout out to her. We need more Mrs. Rosens.

But I shouldn’t have had a woman in there. I enjoy making people laugh, but what I find funny and put online, others might misconstrue and find jerkish.

You shouldn’t have had a woman in there? What? First of all, never apologize to people that have a problem with harmless actions such as being the starting QB of UCLA and having a hot girl in your dorm room hot tub. NEVER! Now the keyboard warriors know they can walk all over Josh Rosen. Any little thing he does in the future, they can call into speculation now knowing he’ll just bow down to their request. As they say, never negotiate with terrorists!!!

Second, you should have had a woman in your hot tub. You were the QB of UCLA and on top of the damn world. Every person would have done the same and whoever says they wouldn’t is a liar. You were living the dream. Just because there are a bunch of people mad at you online so they can distract themselves from their terrible lives doesn’t mean you shouldn’t have had a smokeshow in your hot tub. The only thing you should’ve said to them was “hey, I made her put on a shirt to keep it PG.”

There’s a scene in Scarface where Tony is talking to Sosa, where he says “all I have in this world is my balls and my word:”

There is a lesson in this scene for Josh Rosen. Who cares if somebody finds your post jerkish? All you got in this world is your word and your balls. Don’t break them for nobody, especially those keyboard warriors.

P.s. The best part about Rosen’s hot tub story is the fact that the girl in the photo was with Josh thanks to shooting her shot:

Always shoot your shot. I wonder if Rosen still calls Christine from time to time: