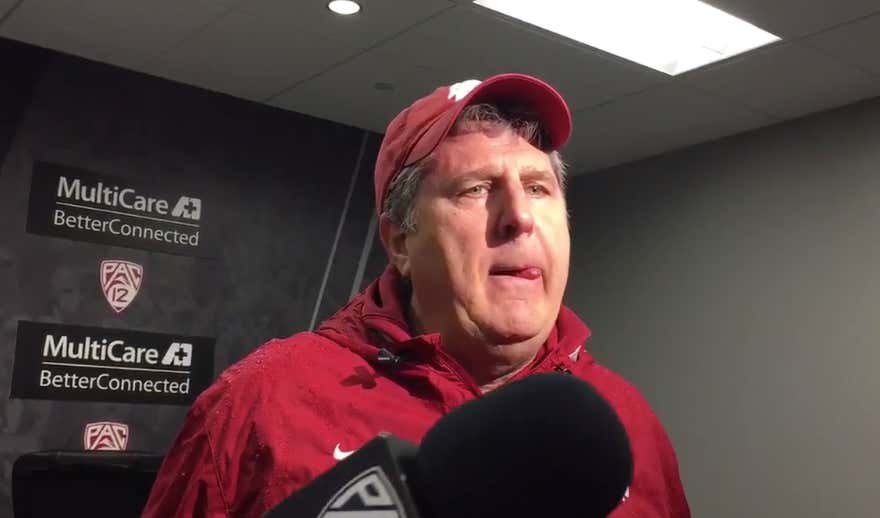 Aside from no football being played, one of the downsides of the offseason is not having a weekly Mike Leach press conference where he goes off on some random tangent about space or how a JFK conspiracy theory relates to the run-pass option.

Washington State is in the midst spring ball. Not only is Leach using this spring to prepare his team to rebound in 2018 after losing starting QB Luke Falk and other top contributors to their 9-3 2017 team, but he is also tuning up for his must-watch press conferences in the fall:

Coug Center-“I tracked a raccoon one time in the snow,” Leach replied. “I was in a neighborhood and I was just curious where this raccoon lived, you know.” Leach followed the tracks in the snow for, what he calls, a half of a mile out of his way into a neighborhood, “just to sort it out.”

You know that crazy friend you keep around because you kind of find the random tangents he goes on funny, but you also know if you cut him off you’d never feel safe again? Mike Leach is that friend. He’s a definite psychopath, but in a good way (at least for now) for college football at the time.

This isn’t the first time Mike Leach has mentioned raccoons. In his Players Tribune piece, Leach mentioned he had a pet raccoon as a child:

When I was a kid I had a pet raccoon. I really liked raccoons — still do. I know an inordinate amount about raccoons actually. People fuss about raccoons all the time, but I’ve never had a problem with them. At my place in Key West, raccoons will show up sometimes and I’m always happy when they do. I named my pet raccoon after one of my favorite book characters, Bilbo Baggins.

I’ll take all the Mike Leach I can get. At this time I feel like we don’t have enough. It wouldn’t be good for business, but a Mike Leach weekly segment on Info Wars with Alex Jones would be absolutely electric, must watch (YouTube) TV.

Who knew raising a pet raccoon is just like raising a human:

Bottom line: I just think raccoons, like some humans, reach a point when they’re ready to grow up. One night, Bilbo got particularly feisty, so my dad and I drove him out to woods. Once we found a good spot, we stopped and I put him on the ground and took his collar off. He kind of ambled about, taking in the new surroundings. I preface this next part by saying I do think humans and animals share an unspoken understanding, to some extent. That’s why it’s so easy to bond with pets. So this is how I remember saying goodbye to Bilbo: He wandered 10 yards away or so from the truck, and then he turned and looked at us and kind of had this expression like, It was nice knowing ya. It was this moment where like, both I knew and he knew that we’d had some good times, but this was it. It was onward and upward for both of us.

I hope I don’t have to give Mike Leach an “it was nice knowing ya” any time soon: