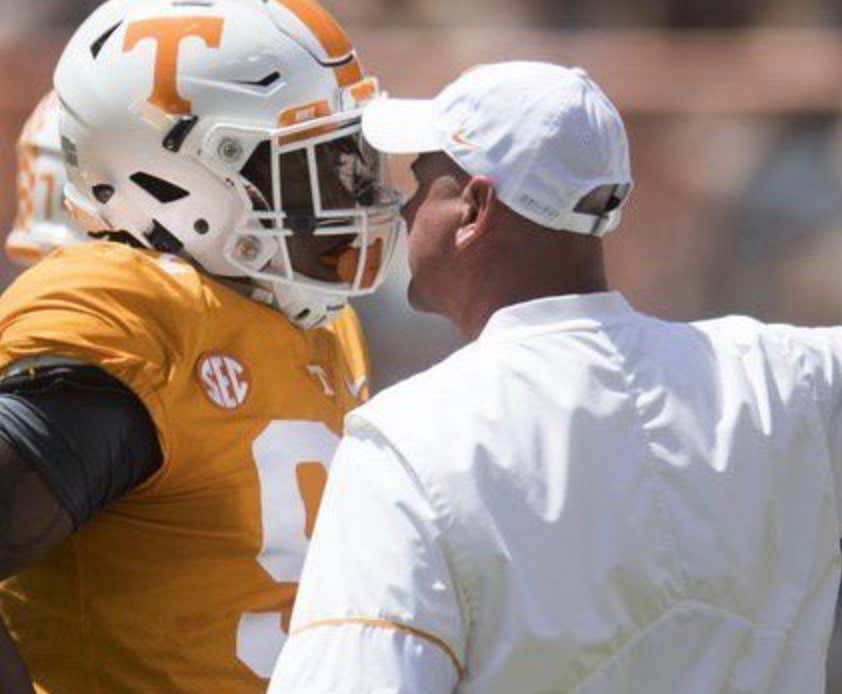 It’s an understatement to say Tennessee’s past 12-24 months have been an absolute rollercoaster. From champions of life to Butch Jones firing to Greg Schiano’s firing/hiring to being denied by Purdue’s head coach, Rocky Top hasn’t been that sweet recently.

To their credit, somehow, some way Tennessee ended up with a pretty good hire in ex-Alabama defensive coordinator Jeremy Pruitt. They hauled in a decent recruiting class and all reports that came from spring practice indicated the Volunteers were moving in a positive direction. Saturday was their spring game, a time to celebrate a fresh start for a once great football program. 65,000 showed up:

Look at all these fans! Just waiting to slap hands with players from a 4-8 team last season! College football is a religion!

There was a smell of a better future in Knoxville. Orrrrrr maybe there wasn’t?

SEC Country-“I saw a couple of guys out there [Saturday] just flat out quit,” Pruitt said. “Call it what you want to. I’m going to say they quit. That’s what I saw.”

“Is one team that much better than the other one?” Pruitt said. “I don’t think so. I’ve watched them practice for 14 days. … But there were some guys that went out there and competed and tried to do the best of their abilities, and we had some guys, that’s not what they did.”

This sentiment from Pruitt wasn’t that unexpected, though. Who knows what Pruitt actually thinks? He comes from the Saban school of coaching, one that uses the media to motivate players. Pruitt and his coaches may be very happy with their teams progress, but doesn’t want praise through the media to get to their head. As Jason Kelce said, hungry dogs run faster.

What was unexpected was Pruitt’s lack of appreciation for his new fan base:

Attacking the fan base after just a few months on the job is a BOLD move. I usually like to respect such BOLD moves, but this one is just straight up bizarre. 65,000 people showed up to Neyland Stadium to watch a damn scrimmage and you are mad? 65,00 people showed up after complete heartbreak in 2017 after a half-decade of expectations were broken in front of their eyes and you are mad? Maybe, just maybe, you should look yourself in the mirror, Mr. Pruitt!

Tennessee fans are survivors. They’ve been through the damn mud. After being beaten down for years because of Butch damn Jones, they somehow put aside their fandom PTSD to come support a scrimmage. SIXTY-FIVE THOUSAND OF EM!!!! Jeremy Pruitt should be giving each and every one of those fans a hug not a “we need to look ourselves in the mirror” talk like he’s Tony Robbins adjace.

Pruitt has a long way to go to get where he is expected to go. Can he get there? Maybe? I guess? That’s a topic for another time.

This whole story may be forgotten in 3 years after he wins the SEC East title and thanks the fans for their support. There could be a method to his madness, a reverse psychology tactic that Nick Saban taught him in a dark film room at 3 AM in Tuscaloosa one night. OR we may look back on this exact moment as a beginning of the “where did it all go wrong for Jeremy Pruitt at Tennessee?” discussion after he’s fired.

Only the future will tell us the truth!!!