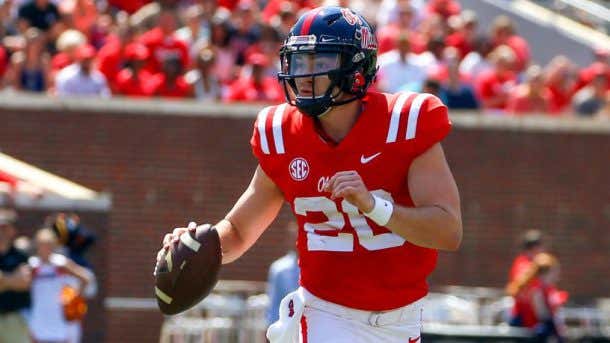 Big news from the world of college football:

Detroit News-Four months after Shea Patterson transferred to Michigan, he will be granted a transfer waiver by the NCAA and will be immediately eligible to play this fall, a source with knowledge of the situation told The Detroit News on Thursday night.

This decision concludes a twisting, often uncertain and lengthy process since Patterson, the No. 1 quarterback in the 2016 recruiting class, decided to transfer from Ole Miss, which is now on NCAA probation for three years and has one year left of a two-year bowl ban.

Shea Patterson has been the topic of discussion for the past few months within college football circles. Kayce blogged her opinion, so did I, on the situation surrounding Shea Patterson, Michigan, Ole Miss, and the NCAA. At points during the offseason, it seemed like Shea, a former 5-star QB, was going to be a victim of the subpar NCAA transfer system and have to sit out a year at Michigan. Thankfully, he didn’t.

For the first time in awhile, it seems like the NCAA made a good decision. Patterson being eligible for the upcoming season is a win not just for Michigan but shows how the NCAA may be progressing from their prehistoric thinking surrounding their athletes. We can discuss the precedent the NCAA may have set here at a different point, but what does this mean for the 2018 Michigan Wolverines? To put it frankly: A LOT.

Has Jim Harbaugh finally found his QB? If Patterson isn’t it, I don’t know who will be. Patterson has the talent to play at any level of college football and has been in Michigan since January practicing with the Wolverines. Harbaugh will have more than enough time to shape him into the quarterback he wants him to be, while also preparing the proper offense. If Harbaugh fails with Patterson in the next two years, it will be time to call his QB whisperer reputation into question.

If Harbaugh does succeed with Shea Patterson, Michigan will be a national championship contender. The offensive line is a bit of a concern, but the receiving core will be older and more experienced, as almost all of them return. Patterson will have Kekoa Crawford, Grant Perry, Donovan Peoples-Jones, and Tarik Black to throw to on the outside, while having two tight ends in Sean McKeon and Zach Gentry for safety blankets. Karan Higdon and Chris Evans also return in the backfield. On defense, 10 (!!!) starters return on a unit that ranked 10th in S&P+. Don Brown, a defensive wizard, will be the coordinator of what will be the backbone of Michigan’s team.

In terms of competition, Ohio State, Penn State, Michigan State, Wisconsin, and Iowa all have legitimate chances of winning the Big Ten. Here is Michigan’s schedule: 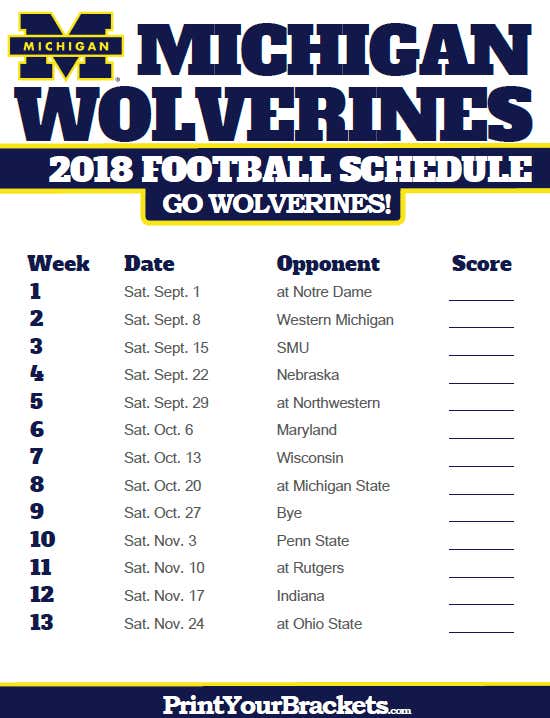 It is broken up relatively well, but still a difficult schedule. Wisconsin and Michigan State back-to-back will be tough, but at least they both aren’t on the road. Plus, after playing in East Lansing, they will have a bye before taking on Penn State. After Penn State, they will have two-tone up games before taking on Ohio State, which will most likely be for the Big Ten East title.

We’ll see how Michigan looks come September 1st when they take on Notre Dame. The Wolverines will be able to drop a game and stay in the college football playoff race. Michigan State, Penn State, and Ohio State are all must wins, while losses to Wisconsin and/or Notre Dame would be discouraging but wouldn’t end their championship hopes.

It’s only April, but college football is thankfully right around the corner. Michigan-Notre Dame week one is going to be fun: