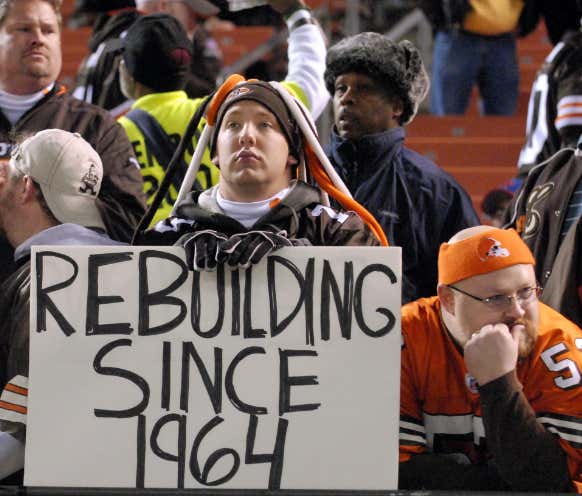 Bad franchises stay bad because bad franchises make bad decisions. The Browns have given us yet another example of that by not only drafting Antonio Callaway but giving him the mentor of Josh Gordon:

Cleveland.com-Last offseason, former Olympic gold medal sprinter Tim Montgomery helped Josh Gordon get back on his feet. This year, he did the same for former Florida receiver Antonio Callaway, whom the Browns took a chance on in the fourth round despite a laundry list of legal troubles.

At one point over the past several months, the two receivers overlapped for a week at NUMA Speed, the training facility in Gainesville, Fla., owned by Montgomery.

“It’s very ironic that Antonio and Josh Gordon ended up on the same team,” Montgomery said in a phone interview. “Now Josh Gordon gets the opportunity to play big brother and I think Josh is going to do a great job of that.”

People can change. Hopefully, Josh Gordon has changed since returning to the NFL marijuana free and Antonio Callaway has matured after multiple questionable decisions at Florida. With that being said, I don’t think either of these players is in the position to be a “mentor” or a “big brother.” If Josh Gordon kills it for the next few years, sure, then maybe he can mentor the troubled rookie that slipped to the 4th round, but not now. Remember, Josh Gordon told GQ last year that he played “probably every game of his career” drunk or high. That means he’s only played around 5 or so games in his career not high. Let’s let him get to 16 games with his new pregame routine and then we can get him going in the big brother program.

I’d even argue that Antonio Callaway needs a full-fledged babysitter at all times until he shows he can handle himself. Here is a recap of Callaway’s career at Florida:

2016: During sexual assault hearing, Callaway testifies that he was “high on marijuana” during the encounter, and stated that he was “so stoned I had no interest in having sex with anyone.” This somehow works. Callaway is cleared.

May 2017: Found with marijuana in a car while pulled over by police.

March 2018: Callaway tests positive for a diluted sample at NFL Combine. Admits there was marijuana in his system.

You want that guy to be mentored by Josh Gordon? The guy that was “so high” one night that he couldn’t even think about having sex? Let’s use our BRAINS here!

Marijuana in football is a topic for a different time. Right now, it is against the NFL substance policy and can result in long-term suspensions. It is the Browns responsibility to keep their Antonio Callaway investment off the suspension list. Obviously, they can only do so much to make sure that doesn’t happen, but I think it’s fair to say that they should start by not having Josh Gordon as his mentor.

P.s. In other Browns news:

SB Nation-Jackson will dive into Lake Erie June 1, following up on his post-2016 promise his Browns wouldn’t repeat their awful 1-15 season in 2017.

He’s also hoping a visit to the lake will “cleanse [the team] of all the losing of the past two seasons” which, if you’re keeping track, was 31 of the team’s last 32 games.