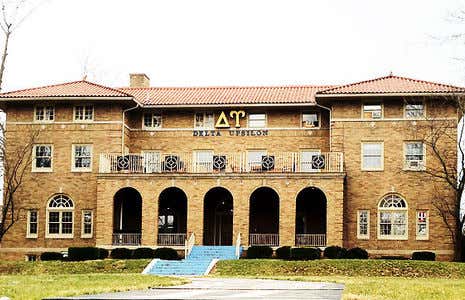 2018, the year fun ended, has yet another phenomenal addition to their resume, this time from the world of fraternities:

Delta Upsilon-Today, the International Fraternity’s Board of Directors announces the adoption of new policies aimed to further enhance our mission of Building Better Men. After careful consideration, the Board of Directors has passed a substance-free housing policy that will take effect Aug. 1, 2020. This means that within two years, no alcohol, tobacco or other drugs will be stored or used in a DU chapter facility, regardless of a member’s age. To help chapters ease into this transition, beginning Aug. 1, 2018, all hard alcohol will be removed from chapter housing, and there will be stipulations on where beer and wine may be stored, consumed and distributed within a chapter house.

Removing alcohol from our facilities sends a clear message about our purpose, values and commitment to make campuses safe for all students.

I’m not a big frat guy. At Fordham, there are no frats, so I have little to no experience with Greek Life outside of stories from my friends at other colleges. I guess I’m a n00b because I had no idea that such a rule like this one could ever exist. A frat banning alcohol from its chapters houses sounds like a hotdog with no ketchup or pouring milk into the bowl before pouring the cereal. It shouldn’t happen. The occurrence of it happening sounds like a myth because of it’s absurdity. No way people actually do that, right? Yeah, the head of the frat says it’s “an alcohol-free party” but we all know what’s in the red solo cup.

It turns out that there are a bunch of fraternity chapters throughout America that have houses that are required to be “dry.”

I’m not sure where you are supposed to host parties if your house is required to be dry. I feel like half of the reason you ever go through the shitty frat pledging process is so you can one day say to a group of people trying to get into your party, “who do you know here?” or “name 10 brothers…GO!!” Then when they fail, you tell them to get lost, but tell the girls they came with that they can stay. Just out-alphaing the competition left and right with a backward visor on while wearing your lightly colored, horizontally striped polo. That’s the dream of every pledge, right? That’s what I would want if I had to go through the pledging process. Seems like those days in the past for any Delta Upsilon brothers. Sad!

The weirdest part of the statement put out by Delta Upsilon was them touting themselves as some progressive organization:

Since Delta Upsilon’s founding in 1834, we have prided ourselves as being a forward-thinking organization.

Yeah, prohibition was SOOOOO progressive. Arguably the most progressive time in American history.