Instead of an enlarged photo of the thumbnail, here’s a much better, rarer (and hotter) picture of the HBC: 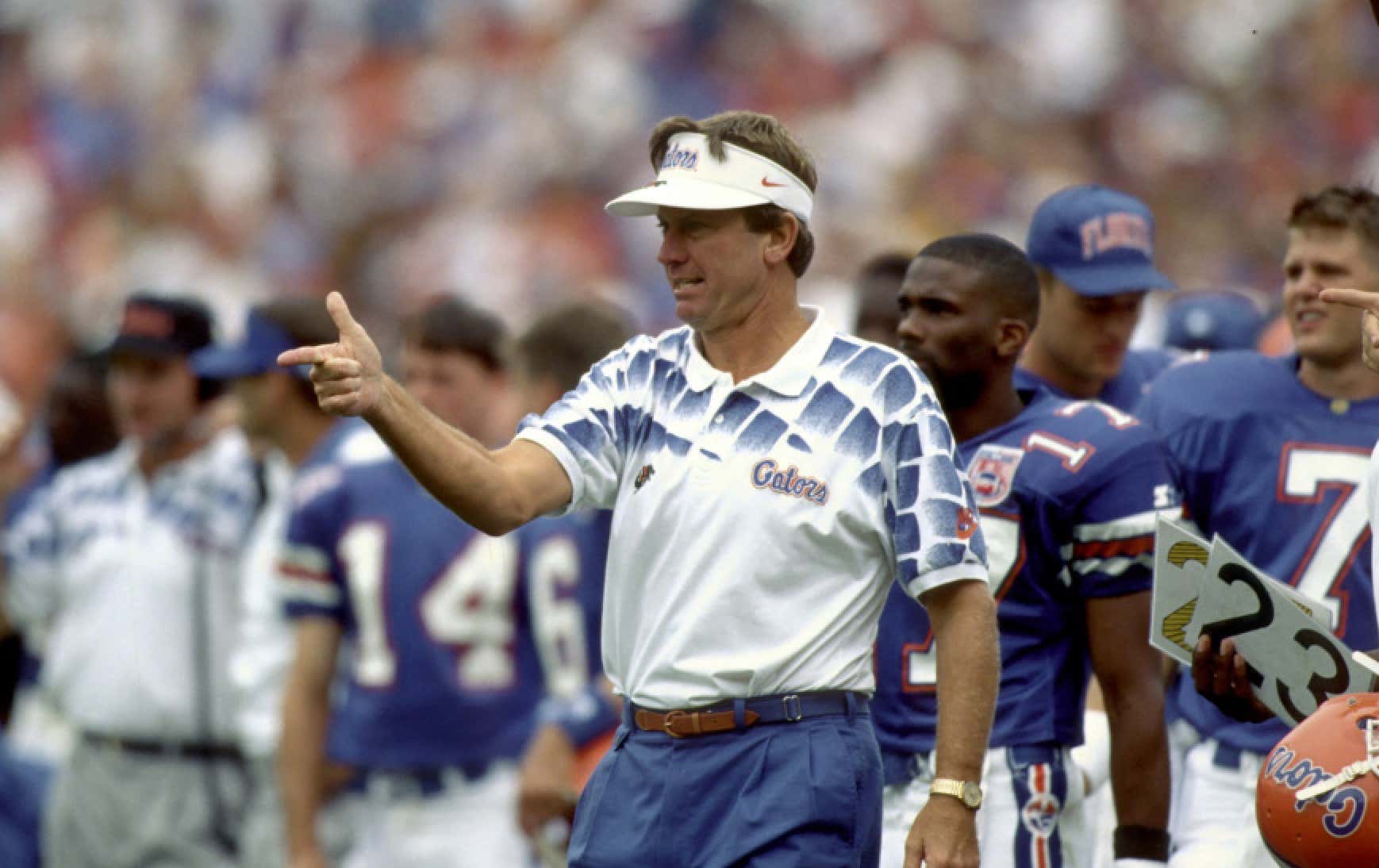 Going to write a full article on this during the 2018 preview, but I am having a hard time believing that 2018 will live up to 2017’s season. From start to end, the 2017 season was phenomenal.

Football Scoop-USA Today has partnered with Athletic Director U to publish an updated list (view the full study here) for FBS athletics directors, revealing salary information for 115 of the 130 FBS ADs.

$3 million a year! To be the athletic director of Notre Dame!

Michigan AD wants Jim Harbaugh to retire from coaching as a Michigan Man!!

M Live-Michigan athletic director Warde Manuel wants his football and men’s basketball coaches to remain with the Wolverines until they’re ready to be done with the profession.

“I love my coaches across the board, love those two guys in particular,” Manuel said on Tuesday afternoon during meetings featuring Big Ten athletic directors and men’s basketball coaches at the conference headquarters just outside of Chicago. “I’m extremely pleased with where we are from a staffing, coaching standpoint and Jim and John are two people that I would love to see retire from this institution, retire from coaching.”

We’ll see if he still feels that way after a 7-5 season and an empty Big House.

What can’t Jake Olsen do?

Best main color to have as a college football program? ORANGE!!!

I am a HUGE fan of the r/cfb community over on Reddit. The subreddit that has close to 400k subscribers keeps me going on college football talk during the offseason. There are some bizarre posts throughout the spring and summer months, but college football is bizarre so they are weirdly fitting. One of those posts appeared at the top of the subreddit this week titled, “Which Color is the Best in College Football? An Advanced Analysis of the Hard Data With Some Shocking Conclusions.” Peak offseason material if you ask me. Here is what u/LordHudson30 found: 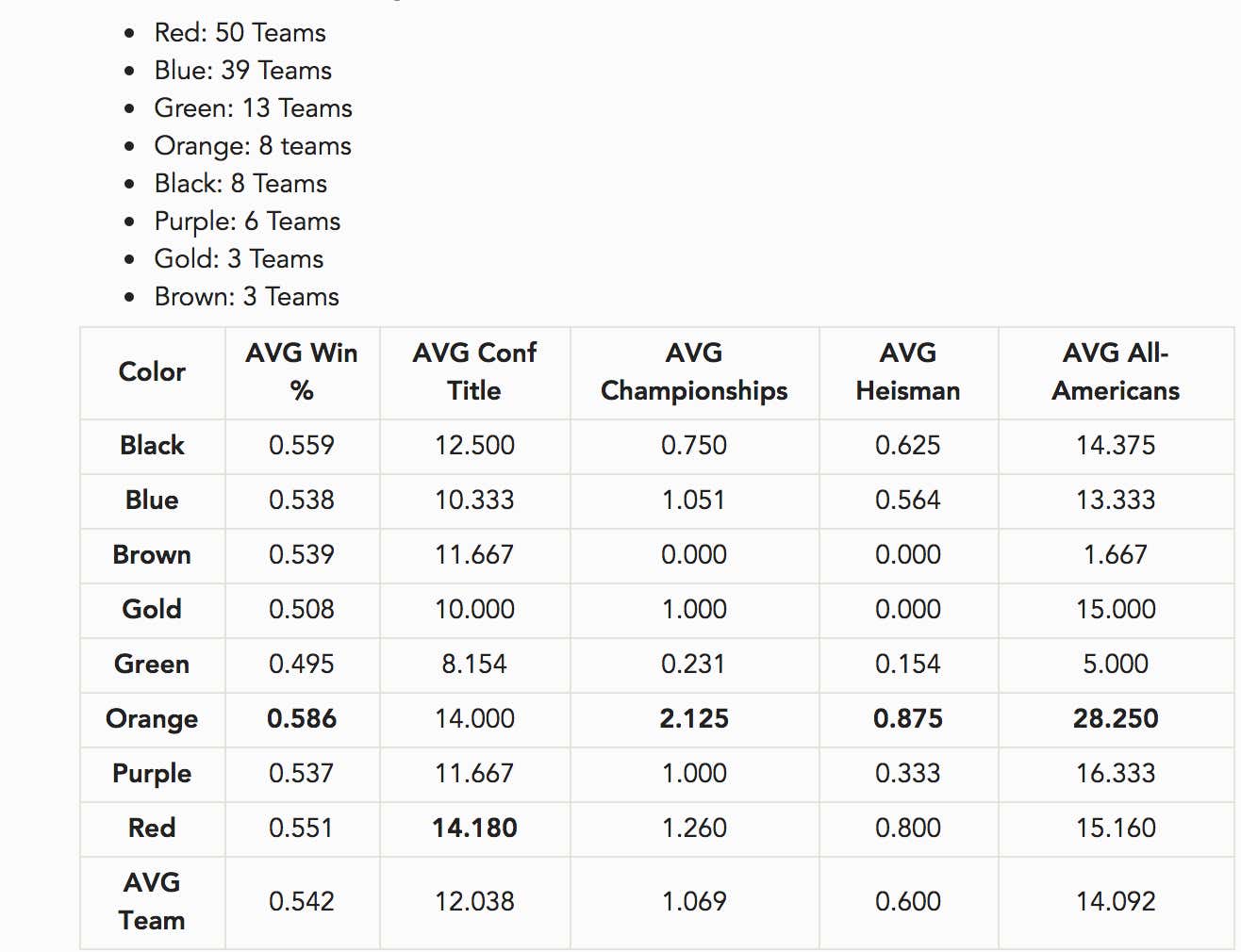 Orange is it! Does this mean that Texas is officially….BACK?!?

Great news for the likes of Oregon State, Illinois, and Syracuse.

Speaking of Syracuse, an upgrade to the Carrier Dome is on the way! 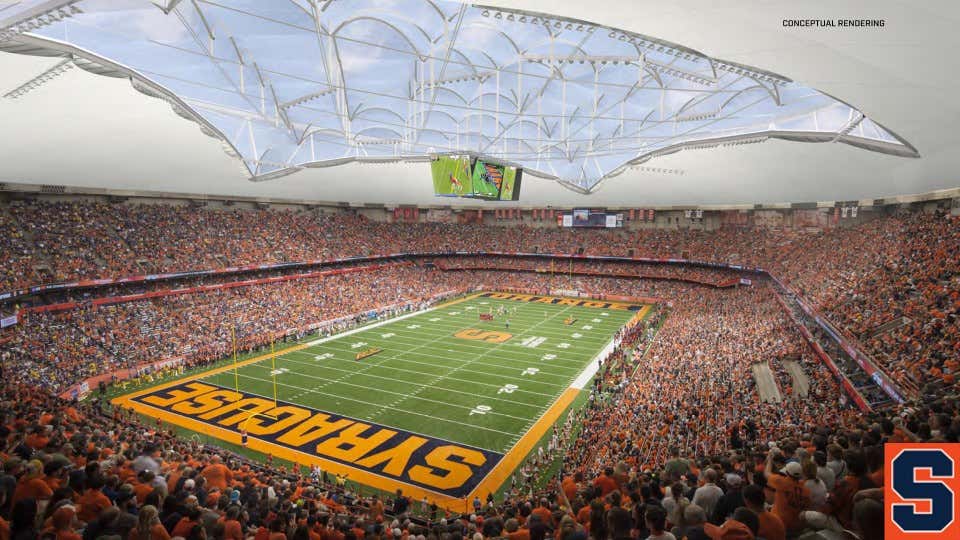 Syracuse.com-Syracuse University announced plans to spend $118 million on improvements to the Carrier Dome that will include a permanent roof, a vertically hung scoreboard, air conditioning and other amenities.

The **Carrier** Dome not having air conditioning for the past however many years has to be one of the most ironic yet funny random facts about college football ever.

Canton Repository-“This is really the first time I’ve talked about this since the spring game, but as of now it looks like Dwayne Haskins will get the first opportunity to be the starter,” Meyer said. “Dwayne is a young guy that came in against our rivals and did a heck of a job. You go back and watch that again, he came in on the first drive and took us down the field and scored on that first drive against that defense. So he’s got a great release, he’s got good size and he’s a mobile-enough quarterback.

“It is going to change how we attack defenses.”

It’ll be interesting to see what happens to Tate Martell. I would not be surprised if he transfers by the end of fall camp.

Everybody PLEASE welcome Tusk V!!!! A very good pig!! That is NOT bacon!

Again, Tusk V is NOT bacon:

News 5-The tiny Russian boar weighed 5 pounds, 8 ounces and was 11 inches long. He was born in a litter of five, and he is said to like “Mom’s milk, watermelon, corn, grapes” as his favorite meals. The Russian boar closely resembles the “wild band of razorback hogs” described by Arkansas head football coach Hugo Bezdek in 1909. The UA Cardinals was renamed to the Razorbacks the following year.

Tusk V is expected to take over duties as the Razorbacks’ live mascot in 2019 after his father, Tusk IV, retires.

News OK-“Eliminating Nebraska has had the same effect on the OU football schedule as eliminating Christmas would have on my calendar,” wrote OU fan David Polley. “Sure, life has gone on without OU-Nebraska; but life would go on without Christmas lights, Christmas trees, singing carols and opening presents on Christmas morning.

“OU-Nebraska could disappoint when it was uncompetitive, but so can Christmas when favorite relatives can’t be home for the holidays. That never made it less special to have — and to look forward to all year long.

Put Iowa-Nebraska BACK on Black Friday:

Land Of 10-Shawn Eichorst paved paradise and put up a parking lot. You don’t know what you’ve got ‘til it’s gone, as the old Joni Mitchell song goes, so one of the first things Nebraska athletic director Bill Moos did once he had Gary Barta’s ear was to bend it about getting Black Friday back.

“We were at a meeting at the time, and at one of the meetings, he just pulled me aside and asked where I stood and where [football coach] Kirk [Ferentz] stood,” Barta, Iowa’s athletic director, recalled after the first day of the Big Ten’s spring meetings wrapped up early Monday evening.

“And we said we always like, and still like, that Friday matchup. We love playing Nebraska in that series.

“So who knows? No updates. It isn’t done, but it’s something that Kirk and I remain interested in.”

Barta appeared to backpedal slightly from the comments Ferentz made at a youth camp in Johnston, Iowa, earlier this month. There, Ferentz told Land of 10 and assembled media that “it sounds like we’re going to rekindle” the Heroes Game on the day after Thanksgiving, possibly as soon as 2022.

Mike Sadler is getting his own beer!

Sadler’s Banana Hammock is a Belgian Tripel made by Jagged Mountain Craft Brewery in Denver, Colo., and the beer is set for release this weekend. Brewed with bananas, blood oranges and almost 100 pounds of powdered donuts, the beer’s ingredients are all directly related to Sadler in some way. The ideas for the contents of the beer came from former Michigan State players such as Travis Jackson, Connor Cook, Connor Kruse, Max Bullough, Jack Allen and Marcus Rush, all of whom played with Sadler in East Lansing.

“The creation process really was a matter of listening to what the guys remembered about Mike and turning it into a beer,” said RJ Banat, a Michigan State alumnus and owner of Jagged Mountain. “Some everyday stuff — what did he like to eat, what did he drink, etc. — (and) some not everyday stuff, like the Speedo story.”

It was a little more than five years ago during MSU’s spring break when Sadler, coming off an All-Big Ten sophomore season, was the subject of a revealing beach photoshoot in which he wore nothing but a pair of snug swim briefs. As it turned out, the purpose of the photoshoot was to take the resulting pictures and plaster them all over the office of then-MSU defensive coordinator Pat Narduzzi, who had jokingly tweeted about players taking their Speedos on spring break.

Hmmmmmmm, was Justin Fields behind this?!?

Blake Barnett makes it official and an interesting stat:

Remember that stat the next time your program lands a 5-star QB.

Revolutionaries rarely get the respect they deserve! 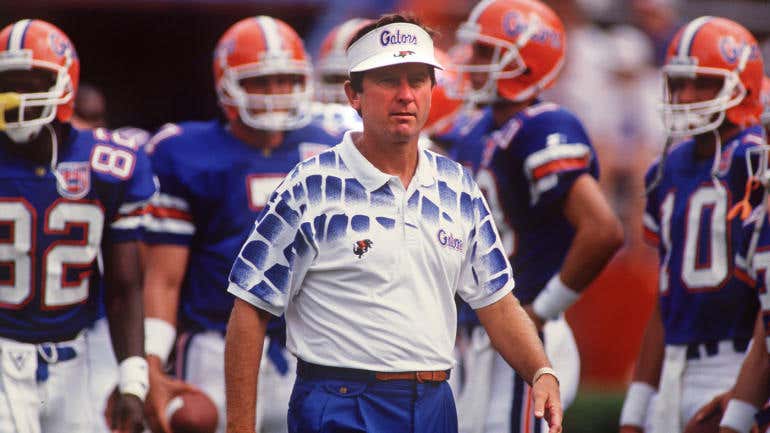 Ed Oliver is going to end a few lives this year in the AAC. This man deserves to be in one place and one place only: the NFL!

Give me some of what Mike Bobo is smoking in Colorado:

“I walk into homes and present ourselves as being the best place in the country. Part of that is salesmanship but part of that is what I believe. I would not have taken at Colorado State in Fort Collins if I did not believe this could not be one of the premier institutions in the United States. I feel that way and I’ve had numerous people, not just me, but families and dads (say), ‘This is every bit, you just don’t have the label of Power 5,’ and I believe that. That’s how we go about our business.”

You think I’m going to leave a story about Mike Bobo without saying it? Really?

I wonder where the key works. Does it open the door to the countless bars in Boca that serve overpriced drinks to underaged college kids? Or is it more of a key to open the gates to the retirement community? It could even be the universal key to ALL of the back specialist clinics in Boca! OR the key to Del Boca Vista!!!

We are almost there, folks! 99 more days!