On Monday’s episode of Spittin’ Chiclets, the guys are joined by Sean Avery. Sean joins (52:51) to talk about his new acting career, his hockey career, his new podcast and more. Scott Gomez even stops by to tell a few stories. The boys also talk about some NHL news, including the rebirth of the Battle of Alberta as well as the Devils recent firing of their GM, Ray Shero. The guys wrap up with some Oscars talk and RA gives a Gambling Corner (02:15:27). 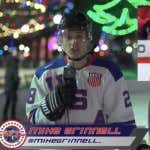