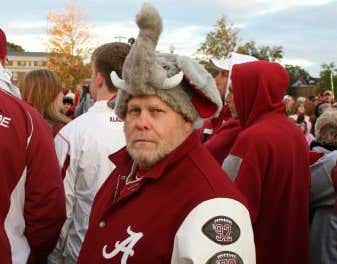 Harvey Updyke, one of the most infamous criminals in the history of college football, has outlived his probation. If you’ve been living under a rock, Harvey Updyke is the worlds biggest Alabama fan. After seeing a Scam Newton jersey on Bear Bryant’s statue, he went down to Toomer’s Corner and poisoned the trees that Auburn fans TP after victories (yes, I know it’s a weird tradition). He then called into Paul Finebaum’s show and essentially told on himself:

He was soon arrested and then put on probation from talking to the media for 5 years. Most thought he wouldn’t outlive that probation. He did. You know what means? We get to hear from the man himself:

SOURCE-Updyke Jr. pleaded guilty to a Class C felony of criminal damage of an agricultural facility, was ordered to serve at least six months in jail, spend five years on supervised probation and ordered to pay $800,000 in restitution.

Updyke’s probation recently ended allowing him to speak to the media about the incident.

“I wanted Auburn people to hate me as much as I hate them,” Updyke tells CBS News in a podcast named “Mobituaries,” hosted by Mo Rocca.

“I just don’t like Auburn,” added Updyke, who is banned from Auburn’s campus for life. “You know, there are several things in this world that I really and truly don’t like, and Auburn is one of them.

In a weird way, Harvey Updyke is the reason I love college football. I don’t want to see trees poisoned, but the (at times) absurd culture surrounding college football that has created crazy fans like Updyke has me addicted to the sport like a druggie. It’s not the act of the tree poisoning, but instead the response. The fact he called into Paul Finebaum and talked himself into an immediate guilty verdict….phenomenal. The enhanced Iron Bowl hate that came out of the poisoning…phenomenal. The crying tree doctor…..phenomenal (can’t find a video of this, unfortunately). Harvey Updyke’s children being named Crimson Tyde and Bear Bryant…..phenomenal.

What a sport. What a wild sport.

P.s. Harvey wanted to have a third child named Ally ‘Bama. His wife replied, “hell no.”